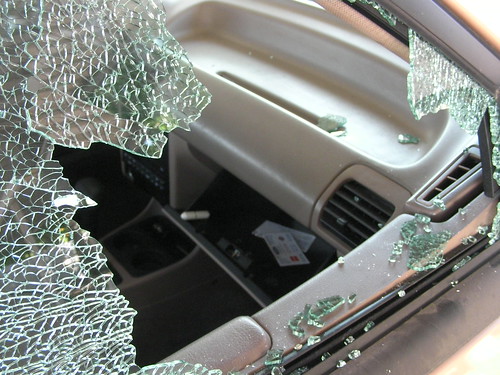 Power amplifier widgets mean criminals don’t need to do this to your keyless car. But the alarm won’t go off either… Photo by Bekathwia on Flickr.

A selection of 9 links for you. And only you. I’m charlesarthur on Twitter. Observations and links welcome.

Yahoo has been busy rebuilding its business around mobile under CEO Marissa Mayer, and soon it could make one of its biggest bets yet on the platform. We have heard perennially that the company has been looking to buy Foursquare, the New York startup behind the eponymous local search app and location-based social “check-in” app Swarm. The latest rumour we are hearing is giving the deal a price tag of around $900m.

It must be hell going shopping with Marissa Mayer. “Let’s buy THAT!” “Marissa, it’s way overpriced.” “WANT IT!”

So, is this hideously overpriced? Let’s see…

An analysis of Foursquare’s popularity after removing checkins » Junkyard Sam

In May 2014 Foursquare removed check-ins and transformed the app into a lesser imitation of Yelp (using the accumulated reviews from Foursquare’s loyal audience.)

Foursquare’s users felt betrayed that their reviews were used but what they once loved about the app was removed.  Here’s how that worked out:

So, not well. Lesson: don’t change a winning formula.

As Maryland law professor Frank Pasquale writes in his acclaimed new book, The Black Box Society: “Google is not really a competitor in numerous markets, but instead serves as a hub and kingmaker setting the terms of competition for others.” For Pasquale, the solution lies in greater transparency. “Google’s secrecy keeps rivals from building upon its methods or even learning from them,” he writes. “Missing results are an ‘unknown unknown’: users for whom certain information is suppressed do not even know that they do not know the information.” The irony of the situation is that Google knows so much about us, and we know so little about it.

Let that thought roll around your head a little.

Miguel Helft, in February 2009, as Google applied to become a complainant in the EC’s case against Microsoft over illegal tying of Internet Explorer to Windows:

“Google believes that the browser market is still largely uncompetitive, which holds back innovation for users,” Sundar Pichai, a vice president for product management, wrote in a Google blog. “This is because Internet Explorer is tied to Microsoft’s dominant computer operating system, giving it an unfair advantage over other browsers.”

Google declined to make anyone available to discuss its announcement. By becoming a party to the case, it would participate in the proceedings and gain access to the confidential “statement of objections” that European regulators sent to Microsoft last month. Google could also argue for remedies it prefers.

This seems like a bad move, in retrospect. Google had just launched Chrome, and Android was just beginning to make its first moves. You’d have to be smart to see how mobile was going to grow (but aren’t the people at Google meant to be smart?), but angering Microsoft – as this surely did – meant that Microsoft was always going to seek revenge. Which it is now getting.

Nick Bilton is keeping the (electronic) key to his Toyota Prius in the freezer to stop people getting into his car. Here’s why:

Mr. Danev specializes in wireless devices, including key fobs, and has written several research papers on the security flaws of keyless car systems.

When I told him my story, he knew immediately what had happened. The teenagers, he said, likely got into the car using a relatively simple and inexpensive device called a “power amplifier.”

He explained it like this: In a normal scenario, when you walk up to a car with a keyless entry and try the door handle, the car wirelessly calls out for your key so you don’t have to press any buttons to get inside. If the key calls back, the door unlocks. But the keyless system is capable of searching for a key only within a couple of feet.

Mr. Danev said that when the teenage girl turned on her device, it amplified the distance that the car can search, which then allowed my car to talk to my key, which happened to be sitting about 50 feet away, on the kitchen counter. And just like that, open sesame.

Cell phones are pervasive in the region. In 2002, roughly one-in-ten owned a mobile phone in Tanzania, Uganda, Kenya and Ghana. Since then, cell phone ownership has grown exponentially. Today, cell phones are as common in South Africa and Nigeria as they are in the United States. Smartphones (those that can access the internet and applications) are less widely used, though significant minorities own these devices in several nations…

…Roughly a third of South Africans (34%) and about a quarter of Nigerians (27%) say that their device is a smartphone, i.e. one that can access the internet and apps, such as an iPhone, Blackberry or Android device. Smartphone ownership is less common in the other nations surveyed, and in Tanzania and Uganda it is still in the single digits. By comparison, 64% in the United States owned a smartphone as of December 2014.

But those who are more likely to own them are young, educated and English-speaking. I’d love to see some data on whether it has an economic effect to own one – though splitting that from the “educated” benefits would be tough.

According to a report from the University of Michigan’s Transportation Research Institute, 6% to 10% of American adults will get motion sickness—with nausea, dizziness, vomiting, and so on—in fully self-driving cars either most or all of the time. Another 6% to 12% of American adults will get moderate to severe motion sickness in a self-driving vehicle at least some of the time. That’s a fairly high percentage of potentially ill riders.

If you’ve ever been a passenger in a car driving down a windy road, feeling like you’re going to puke while the driver is perfectly fine, this shouldn’t be too surprising. As the study’s authors, Michael Sivak and Brandon Schoettle, explain, motion sickness is usually caused by two factors: a “conflict between visual and vestibular inputs” (like facing the side of the car instead of looking straight ahead) and a lack of ability to anticipate movements or a loss of control of movement. Since drivers have more control over where the vehicle is moving, they get motion sick less often than passengers.

And what makes it worse? Reading, texting or watching movies. Might as well just drive.

TV monitors, which are monitors for PC that can also receive TV signals via an onboard TV tuner, are very popular among single households who have trouble having a separate TV and monitor.

Recently, this convenience in daily life is growing with the coming-out of new monitors equipped with an enlarged screen mainly for watching TV and those that allow users to watch TV on one half and work on their PC on the other half simultaneously. With this, the portion of TV monitors is continuously growing and is expected to make up to 6.5% of all monitors sold this year, growing from 5.8% last year.

Just a guess, but are most of those sales in Asia?

With Apple’s adoption of force touch technology onto the trackpad of its new MacBook, related component makers hope the trend will prompt other notebook vendors to adopt the solutions for their products, according to sources from the upstream supply chain.

Since technologies adopted by Apple’s products have been usually able to set new trends for its competitors to follow suit, related component suppliers are hoping the force touch technology will be the same. Many Taiwan suppliers are already able to supply related solutions, the sources noted.

The sources also pointed out that brand vendors including Hewlett-Packard (HP), Dell and Lenovo and ODMs such as Quanta Computer, Compal Electronics and Wistron are all able to incorporate the solutions into their notebooks, but they had been reluctant to feature the technology in their products.

Why does it need Apple to make a song and dance about it for this to happen? There’s a similar story about USB-C – Dell and Asus are going to offer products with it. None of the PC ODMs likes to jump first, it seems. But that means Apple scoops the publicity.