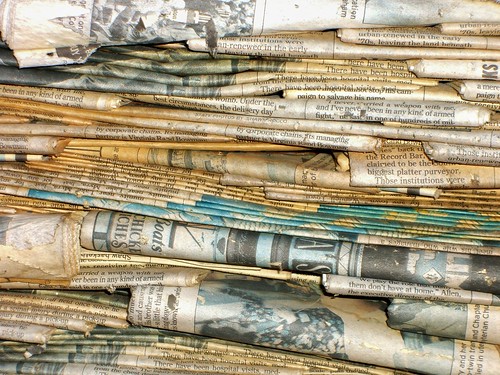 Endangered species (one of many)? Photo by DaveCrosby on Flickr.

A selection of 8 links for you. Spread straight from the fridge. I’m charlesarthur on Twitter. Observations and links welcome.

Google was ordered by a Japanese court today to take down anonymous negative business reviews of a medical clinic, written by people who said they were former patients. The decision is the latest sign of the spread of the “right to be forgotten” concept from Europe to Asia.

The case pitted a Japanese medical clinic against the search engine, Japan’s largest. The plaintiff, an unnamed doctor, said in a signed affidavit that the reviews complaining of poor service were false, one person briefed on the case said.

In the ruling, which was not made public but was reviewed by Quartz, Chiba District Court court ruled that Google must remove the reviews from its local and global search results, or face a ¥300,000 ($2,494) fine.

Google will appeal, but reversal is unlikely.

A ‘darker narrative’ of print’s future from Clay Shirky » NYTimes.com

Margaret Sullivan, the New York Times’s ombuds..person, relaying emails from Shirky, who thinks we’re currently in a lull of print decline (which he says will go fast – which the US saw in 2007-9 – and then slow, as now, and then fast at some time in the near future:

The problem with print is that the advantageous returns to scale from physical distribution of newspapers become disadvantageous when scale shrinks. The ad revenue from a print run of 500,000 would be 16 percent less than for 600,000 at best, but the costs wouldn’t fall by anything like 16%, eroding print margins. There is some threshold, well above 100,000 copies and probably closer to 250,000, where nightly print runs stop making economic sense. This risk is increased by The New York Times’s cross-subsidy of print, with its print+digital bundle. This bundle creates the risk of rapid future readjustment, when advertisers reconsider print CPM in light of reduced consumption and pass-around of print by all-access subscribers. (Public editor note: C.P.M. is the cost to the advertiser per thousand readers or viewers, a common measurement in advertising.)

Both your Sunday and weekday readerships are already near important psychological thresholds for advertisers — one million and 500,000. When no advertiser can reach a million readers in any print ad in the Times (2017, on present evidence) and weekday advertising reaches less than half a million (2018, using the 6 percent decline figure you quoted), there will be downward pressure on C.P.M.s. [cost to the advertiser to reach a thousand readers; high CPMs are good for a publisher].

And then things unravel, Shirky suggests.

Nirave Gondhia is starting a series where he tests the battery life on his new phone:

Testing battery life can be subjective as each person’s usage will vary widely but to try and provide some context to these battery tests, I copied all my data and apps from my Galaxy Note 4 (running Lollipop). Whereas the Galaxy S6 Edge lasted just over 14 hours, my Galaxy Note 4 would usually last 18 to 22 hours with largely the same apps and services running.

The first thing you will notice about the Galaxy S6 Edge battery is that the first 10% seems to drain very quickly. After this initial short burst, the battery begins to level off and settle down. It’s a strange occurrence that many people have reported but it’s possible this is due to the handset being new – after a few days usage, will it still drain the first 10%?

Reviewers have pointed to the S6 having less battery life than the S5; worth watching how this pans out in real life.

It’s been a good run, but the time has come to finally close LIM. As you will be aware, the content has dropped significantly in recent weeks and this has been due to workloads elsewhere and a continual problem finding mobile news that I consider worthy of sharing.

The mobile industry has changed to the point that I believe that one-man blogs are unable to offer the kind of benefits readers used to receive and with so many resources and larger services out there, I am struggling to find the motivation to keep posting content.

No news items have revealed what exactly caused her sudden hospitalization, but all have mentioned that she “suffers from Morgellons disease.” This is because Mitchell herself described the affliction and used its name in an interview in 2010. News stories may then carefully allude to the fact that this “disease” is “mysterious” or even “controversial.” But the damage is done: The phrase “suffers from Morgellons” is quite simply inaccurate, and even harmful, in that it perpetuates a delusion.

Those who claim to be suffering from it are more likely suffering a psychiatric illness, experts say. If that’s the case with Mitchell, we should really be saying she “revealed in 2010 that she suffers from delusional parasitosis.” The name Morgellons was invented by a person who is not a doctor and is not employed by any hospital, university or research institution. It was intensely studied by the Centers for Disease Control and Prevention in the United States, and the CDC’s conclusions, released in 2012, were straightforward: Researchers found no common cause of the disease, and say those who believe they have it have often self-diagnosed after encountering websites that describe it. In other words, it is a delusion that is spread by the Internet.

The fact that newspapers are being so tactful about the possibility of psychiatric disturbance in Mitchell’s case is incongruent with the supposedly new attitudes about mental illness that are being trumpeted in those same newspapers. Aren’t we constantly reading about how we should “end the stigma” when it comes to mental illness? Aren’t we being told that there is no shame in psychiatric disorders, that their sufferers should not be morally judged, that they should be open about their ailments?

To our users: a community update » PressureNet.io

Pressurenet is an Android app that measures barometric pressure and then tries to crowdsource it for, well, weather and related forecasting. But as happens, it has to try to make some money somewhere – including the sale of past data that it collected:

We are aware of the sensitive nature of selling user-contributed data and we want to be open about exactly what information we collect and what control you have over it.

The data is anonymous and is comprised of: an alphanumerical user id that is not directly linked to any personal user information, atmospheric pressure, location (latitude, longitude, and altitude) and time of the pressure reading, phone model type, whether the phone was charging at the time the reading was sent, as well as some other metadata. PressureNet does not and has never collected any personally identifiable information.

Umm. A location doesn’t identify a person, but if you could track the phone by any other means, you’d have a ton of data.

With the end of our partnership with Twitter the disruption is not only measured by the impact on our 1,000 direct customers, but on the tens of thousands of companies that use applications that are “DataSift-powered”. Many of these companies create insights that drive direct advertising revenue back into Twitter. A direct switch to Twitter/GNIP will not mitigate that disruption. Today, 80% of our customers use our advanced processing capabilities that are not available from Twitter/GNIP.

Really bad news for Datasift (a British company that was one of the first into the “big data” social space), which is now going to turn to Facebook. What happens if that decides to go in-house, though? Maybe DataSift needs to look at processing for private clients such as finance.

What the Apple Watch means for the Age of Notifications » Medium

the Age of Notifications is about to face its biggest mess yet, as alerts move from phone screens to watch faces. Notifications are just about the entire point of a smart watch — you’re not going to be reading books, watching movies or doing spreadsheets on them. And a tilt of the wrist is the perfect delivery system for those little blips.

But having that delivery system on your body makes notifications much harder to ignore. It’s jarring enough to get a phone-buzz notifying you of an alert. When it’s something zapping your skin, it’s even more compelling. What’s more, because it’s so easy to simply twist your wrist to see what the fuss is about, the temptation is all the harder to resist.

I don’t get this. It makes it sound as though people are helpless children who can’t figure out what classes of notification (as in, from which app) interest them. The example he gives – a pointless notification from MLB – would have me deciding that MLB was never again going to get the chance to bother me. You don’t need to know about every incoming email (VIPs is fine, for me). Perhaps some people need to retreat a bit from their phones. But that’s no bad thing, whether it comes from buying a smartwatch or just realising they’re failing to live in the moment.