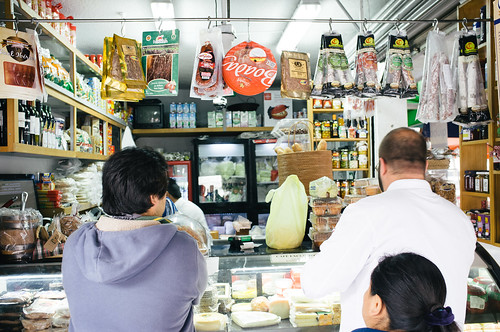 Disrupt this before Proctor & Gamble does. Photo by Premshree Pillai on Flickr.

Why Procter & Gamble is more disruptive than you » Medium

So how does a company of this size [>$80bn in annual revenue] stay so disruptive? P&G is dealing with constantly changing consumer needs across many product lines (many of which are customized for local markets). Instead of relying on the personal experiences of their employees, P&G borrows a page from the playbook of anthropologists — they find relevant cultural groups to study and embed their employees where they live for a period of time, participating in their day to day lives to gather holistic data:

Soon after they’re hired, new employees of P&G undergo special cultural training. “They spend a week in a low-income neighbourhood, working in a bodega, a little shop,” [Jim] Stengel [global marketing officer of P&G] says. “He [the executive] puts an apron on. He works there. He talks to the shop owner. He talks to the people who come in. He becomes part of life.”

Product managers pay a lot of lip service to knowing the customer. But how many of them would spend a week living in Mexico and working at a bodega?

You can read a longer piece about Stengel at the FT. But the lesson that big companies can self-disrupt shouldn’t be ignored.

The case has already created some unusual alliances. Apple and T-Mobile are among the companies siding with Microsoft in the case, while Nokia and Qualcomm are seeking to overturn a lower court’s ruling that found in Microsoft’s favor.

After a 2013 trial in Seattle, Microsoft won a $14.5m jury verdict against Motorola based on a finding that Motorola breached its obligation to offer its standard-essential patents for video and wireless technologies on fair, reasonable and non-discriminatory terms, known in legal circles as “RAND” or “FRAND.”

The case is notable in part because U.S. District Judge James Robart in Seattle took the unusual step of setting a process for establishing royalties for standard essential patents.

Based on his process, Robart ruled in April 2013 that the Microsoft owed less than $1.8m a year for its use of Motorola’s patented video and wireless technologies in Windows, Xbox and other products. Motorola had originally sought a rate amounting to more than $4bn a year, plus $20bn in back payments.

Slightly more complex than it seems, because it could debase the idea of SEPs if they’re too low-priced. But Motorola was really trying too hard. (It tried the same against Apple and was rebuffed.)

The ascension of Google’s Sridhar Ramaswamy » The Information

Amir Efrati has a real in-depth piece about Ramaswamy (who doesn’t seem to have cooperated with it) pointing to tensions with Susan Wojicki, head of YouTube ads):

Mr. Ramaswamy viewed himself as a protector of the search-history data. In the past, he and Mr. Page and others had stated their fear that it might feel creepy if people saw banner ads on non-Google sites based on things they had searched for on Google.com. Ms. Wojcicki had long pushed Google to stay current with ad-tech industry trends, pushing the boundaries of what people like Mr. Ramaswamy were comfortable with.

In the 2013 meetings, Mr. Ramaswamy also expressed hesitation about Google search data being used to target ads to people visiting YouTube, where the DoubleClick cookie was used, because it might be visible or “leak” to advertisers that used the cookie, which might lower its value. And he feared that Ms. Wojcicki and her team would use the search data to try to improve the ad quality of non-Google sites that are part of the display-advertising “network,” which also includes YouTube.

“Tell me what you really want to do,” Mr. Ramaswamy asked Ms. Wojcicki at one meeting, looking visibly annoyed, according to one participant. “You want to use search data on the network,” including non-Google sites. “Just say it.”

Over the years I’ve said numerous times that when it comes to battery life on iOS devices, Apple appears to have a target battery life in mind and builds its hardware—a balance of power-saving software, hardware efficiency, and battery capacity—to hit that number.

It’s an observation born out of reading spec sheet after spec sheet over the years while writing reviews of new iPhones and iPads. Every year, people who are frustrated with their iPhones running out of juice before the end of the day hold out hope that the next iPhone will ameliorate the issue. In general, those people have not been satisfied.

And here’s the graph that proves his point – though note the pop at the end:

Yonsei University Professor Cho Kwang-soo was the speaker for this week’s session. The professor said the mantra of “one person, one device” has passed.

“Today, ‘one person, multi device’ has become the main trend, meaning that one person is now being connected to multiple devices. Without understanding about human nature, you can’t develop products that can meet consumer expectations,” Cho was quoted as saying.

Samsung needs to invest more for the development of wireless charging and new mobile operating systems that allow multiple devices to activate, the professor said.

In a briefing to local reporters, chief Samsung communications officer Lee Joon said the Apple iPhone was presented as the right device that has shown remarkable advancements in user-experience design.

Microsoft is expected to have a chance to ship over four million Surface tablets in 2015, up from two million units in 2014, because of its new Surface 3 and Surface Pro series products, according to sources from the upstream supply chain.

Microsoft is reportedly planning to unveil its next-generation Surface Pro 4 tablet during the upcoming Build developer conference in April. The new Surface Pro tablet is estimated to enter mass production in June and will be released along with Windows 10 in the second half of 2015, the sources said.

Apple Watch reviews are in: an ‘elegant’, overpriced gadget ‘you don’t need’ » The Guardian

The upshot seems to be that the battery life is good, unless you’re using it as a glorified FitBit (which it kind of is), that the application loading times are very long (which Apple has promised to fix in subsequent versions) and that it’s a lovely little device, unless of course you disagree, but it’s slow, not particularly intuitive and it’s probably worth waiting for the inevitable upgrade.

There’s also a fundamentalist split between the haute horologie posse and the tech world: in the former, consumers expect a flawless device for an unspeakable amount of money. In the latter, where inconveniences and flaws are ironed out by simply iterating the product again, a new chunk of tech is often praised for the novelty of what it aspires to do. “Unlike the Cartier I got for college graduation, the original Apple Watch’s beauty will soon fade,” [Joanna] Stern [at the WSJ] observes.

The ducks are always greener » Marco.org

My principles are only diverging further from Google’s over time, and I feel a bit defeated whenever I turn to them for anything anymore, so I attacked my primary dependence head-on: web search.

In my experience so far, DuckDuckGo’s search is good enough the vast majority of the time. Sometimes, its results are even better than Google’s, and they’re rarely much worse.

The number of people moving to DuckDuckGo is growing, very slowly; they’re finding that search is a commodity.