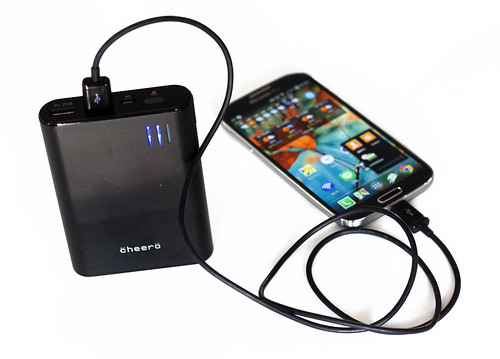 A replaceable battery for the S6. Photo by japanexpertena.se on Flickr.

I’m interested to see the result of this poll on Android Pit, which asks Samsung owners how important a replaceable battery and (separately) microSD card is to them.

Part of my interest is that I helped inspire it, through a conversation on Twitter. Modest, moi?

@pdouglas yup. A poll of how many people own a Samsung Sx and have a spare battery might be instructive.

Ever since it was announced that the Galaxy S6 wouldn’t offer either a removable battery or a microSD slot, there was all sorts of kerfuffle on tech blogs, and the comments therein: people said that they bought Samsung stuff specifically for those elements, and that those were key things which set them apart from the (reviled, in their eyes) iPhone range, which has never offered a removable battery or slot-in storage.

However, I’m pretty sure that Samsung’s move is not only idealistic – not having to make the back removable avoids all sorts of design compromises – but also driven by clear data.

Consider this: Samsung knows exactly how many Galaxy S phones it has sold. It also knows exactly how many replacement batteries it has sold – it certifies them or similarly gets data from any company that’s selling it with its name. So that’s the battery story sorted. (See the update below if you’re just now saying “ah, but third-party batteries…”)

I suspect that it also gets analytics on the use of microSD cards – anonymised, of course – since I know that it gets that sort of data about stylus use on the Note series (apparently about 10% of users ever use the stylus).

In which case, its decision to dump removable batteries and microSD cards is simply one where it knows a few people will be upset, but the vast majority won’t. And that once again will show that people who make a lot of noise on the various tech blogs (whether above or below the line) may feel keenly about these issues, but aren’t necessarily representative of wider use. (The comments on that Android Pit story are typical: people annoyed about the change, but no clarity on what they’ll do instead.)

I’ve long felt anyway that the arguments about replacement batteries don’t hold water. External battery chargers are comparatively cheap, and don’t require you to take the back off your phone and the battery out (which immediately means your phone has to be restarted). And a good point made by Janak Parekh via Twitter: Samsung has focussed on fast recharging for the S6. (I’ve been impressed for some time by how quickly iPhones recharge. I haven’t seen it documented in comparative benchmarks, though. Update: but of course Anandtech, the site for which nothing is not worth a benchmark and a graph, documents it. Here’s the chart comparing how quickly various top-end smartphones recharge, in its HTC M9 review: it shows that the Galaxy S5 and Note 4 have the fastest recharge times, about 10% faster than the iPhone 6.)

Similarly on the microSD point: Google offers a lot of free cloud storage, and so does Dropbox, and I don’t buy the idea that you really need to have a bazillion gigabytes of music on your phone all the time. 1GB of music is 1,000 minutes of listening time, or over 16 hours. And that’s not very much to have devoted to music. When you get back in range of Wi-Fi, you can download a whole new lot.

The direction there is only towards more availability of cloud storage, not less – so, away from microSDs. (What’s more, microSD cards are amazingly fiddly and easy to lose.)

So I don’t think that the absence of these elements is going to significantly affect sales of the S6.

However, that doesn’t mean that I think the S6 is necessarily going to do gangbusters. It’s much too early to say that. Samsung’s position at the top end is being chewed in China and elsewhere by the iPhone 6 and 6 Plus, and from below by Xiaomi and local vendors. It’s going to be a tough row to hoe.

Update: plenty of responses on Twitter (as well as here). Let’s deal with a couple.

You know, I think a company the size of Samsung might have the resources to carry out a bit of market research to find out how many third-party batteries fitting its specification are being sold.

And I’m not denying that there are people on Twitter who have bought replacement batteries and are happy with them. That’s not my point. My point is that I suspect Samsung has taken a careful look at how pissed off people are going to be if it doesn’t allow replaceable batteries, and concluded – based on sales data – that actually it’s not going to be that much of the Galaxy-buying population. I don’t see why people are struggling with the idea that a big company that’s not called Google might be data-driven in some of what it does.

Another bonus for Samsung, pointed out by @misterleoni:

Certainly, being sure that you can keep “OMG SAMSUNG BURNT DOWN MY HOUSE” stories out of the papers has its attractions. Also, for the makers of third-party batteries, there’s the chance instead to move up the value chain by developing a brand around their external battery (as in the picture at the top of this piece): much better margins doing that than being some faceless unknown inside a phone.

Again, if you’ve got 200GB of music then you’re such an outlier you can’t see the shore any more. Some data from 2011, looking at the “average” iTunes library, found that the average person (who uploaded their list, so self-selecting, so likely larger) had 7,160 tracks in their library. At 4 minutes per song, that works out to 28GB. (At 1 min = 1MB.) I think that’s an exaggeration too – people in this Yahoo Answers thread offer much smaller numbers. I’d suggest it’s likely closer to 5GB or 10GB, like the early iPods.

So again, I’m not saying there aren’t people who want or need microSD cards to store their music or photos. I’m saying that I think Samsung has looked at the market, and is taking a decision based on that.

Of course, there’s another possibility, which is that almost everyone wants removable batteries and microSD cards, and that Samsung has decided to spite them all by forcing them to buy non-replaceable ones to force an upgrade (or costly repair), and force them to buy pricey inbuilt storage. (Well, the latter certainly works for Apple.) But that’s so customer-hostile for a company that’s in straitened times, in smartphone terms, that it fails Occam’s Razor. So I’ll stick to the simpler answer: it’s the result of analysing data, and getting simple answers that allow some design compromises (backs that come off, slots for slow microSD cards) to be jettisoned.

45 thoughts on “Samsung knows how many replacement batteries it sells. Which is why the S6 doesn’t have one”