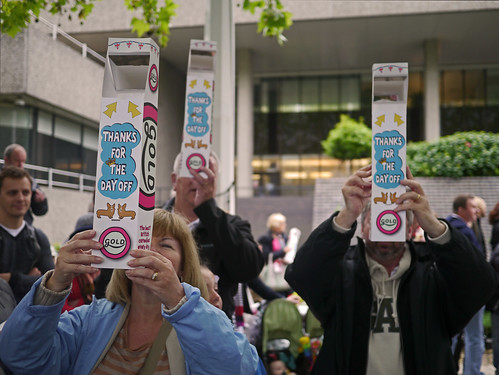 Ahoy there! Periscope is getting noticed. Photo by zoonabar on Flickr.

A selection of 9 links for you. Go on, count them. I’m charlesarthur on Twitter. Observations and links welcome.

Censoring myself for Apple » Marco.org

Marco Arment, on the suggestion that people (especially developers) writing about Apple self-censor so that they won’t be treated vindictively:

every Apple employee I’ve spoken with has not only been receptive of criticism, but has practically begged for honest feedback from developers. The idea that you’d be penalized in the App Store for being critical of Apple on your blog is ridiculous and untrue.

Apple employees are also humans, Apple users, and often former or future independent app developers. Chances are very good that any criticism we have is also being criticized and debated inside Apple. Employees can only exert so much influence inside the company, and they need people like us to blog publicly about important issues to help convince the higher-ups to change policies or reallocate resources. One of the reasons I don’t expect to ever take a job at Apple is that I believe I can be more effective from the outside.

My experience is that highlighting things that are going wrong with outside developers leads to them being treated better. Apple notices this at a high level.

Apple and Synaptics: a convergence in the force » Forbes

Patrick Moorhead, pointing out that Synaptics has had a “force touch” trackpad for a little while, and is in fact moving to its second generation – but Windows OEMs haven’t adopted it:

The rest of the Windows notebook industry will likely be forced to follow Apple and Hewlett-Packard’s lead and start to adopt force touchpads. Also, they will very likely use physical haptic feedback as well, at least on high-end and mid-range designs as it delivers a superior experience. Many Windows notebook OEMs will be seen as copying Apple’s Force Touch touchpad design, but the reality is that Apple isn’t quite the first to market with this technology even though they may have perfected it first.

Also needs support in Windows: will Microsoft get that into Windows 10?

Those who go with the 32GB Galaxy S6/S6 edge will have slightly more than 23GB storage available for their apps, files, music, movies and other content. That’s after hooking up a Google account with the device and updating all of the pre-installed apps. Extrapolating this figure shows that users should expect about 55GB free on the 64GB model and around 119GB free on the 128GB model. The numbers might vary based on the region and carrier so these are just ballpark figures.

By comparison, the iPhone 6 OS seems to take up about 3GB. What’s eating up those 9GB?

After the first iPhone came out in 2007, tech publications rushed to identify the phone that would be the “iPhone killer.”

SPOILER: Apple sold more than 190 million iPhones last year. It is safe to say that the iPhone has not, in fact, been killed.

Terrific list (and you can work out how easy it was to put together once he’d had the excellent idea of doing it). Arguably, though, the Galaxy S2 (in 2011) really made a difference.

The inquiry, announced Thursday by the EU’s antitrust chief Margrethe Vestager, follows pressure from France and Germany to use EU competition rules and other regulations to better target the business practices of large technology firms.

And it is part of a broader EU strategy to knit together the bloc’s fragmented online ecosystems into a digital single market. Policy makers hope that will help European Internet firms to build their clout to better compete with US web giants like Google and Facebook.

The antitrust investigation, encompassing all 28 EU countries, aims to establish whether some companies are raising contractual or other barriers to limit how consumers can shop online across EU national borders, Ms. Vestager said at a news conference.

It could lead to cases against individual companies that are suspected of abusing their dominant market position to restrict trade, in violation of EU law.

There are three phases. Consumer products start as a want then turn into a need. In the final phase, which most don’t get to, they evolve into a utility. Here’s how I define the three phases:

• Want — Solves a core value proposition that’s very unique and feels like a novelty.
• Need — People can’t live without it and keep coming back for more.
• Utility — It becomes a feature of other products.

The ones that become huge are the ones that take the core and spread it out over time. You can’t get there over night and you don’t start by creating the network from day one. You start by creating a novel, memorable experience for people. Most ideas are fun or stupid with a core value proposition and over time they become a utility as they get embedded to become culture.

There are thousands of fake accounts on Twitter, Facebook, LiveJournal, and vKontakte, all increasingly focused on the war in Ukraine. Many emanate from Russia’s most famous “troll factory,” the Internet Research center, an unassuming building on St. Petersburg’s Savushkina Street, which runs on a 24-hour cycle. In recent weeks, former employees have come forward to talk to RFE/RL about life inside the factory, where hundreds of people work grinding, 12-hour shifts in exchange for 40,000 rubles ($700) a month or more.

St. Petersburg blogger Marat Burkhard spent two months working at Internet Research in the department tasked with clogging the forums on Russia’s municipal websites with pro-Kremlin comments. In the following interview, he describes a typical day and the type of assignments he encountered.

You have to just sit there and type and type, endlessly. We don’t talk, because we can see for ourselves what the others are writing, but in fact you don’t even have to really read it, because it’s all nonsense. The news gets written, someone else comments on it, but I think real people don’t bother reading any of it at all.

Modern salt mines, but much better pay and conditions.

not every comparison between Periscope and Meerkat is fair. In some places, the app has zigged where its competitor has zagged.

That’s no clearer than when you finish a live session, and Periscope pops up a screen which says “preparing for replay”. There’s no ephemerality here (at least, not by default). When a stream is over, it can be rewatched by viewers who missed their chance first time around, and everything – the comments, hearts, and new-viewer notifications – plays out as-live.

“We didn’t want you to miss the experience, we thought it was special because it was live,” explains [Keyvon] Beykpour [Periscope’s co-founder]. “I still believe that, but we want to balance that with practicality. The synchronicity problem” – ensuring that viewers are available at the same time the streamer is – “is hard. There just is a significant drop-off with that problem.

“The true test for us has been does it decrease the percentage of people who watch live, and the answer I think is no. If you’re watching live, given how low latency the product is, you can change what’s happening.”

Retention versus ephemerality. I wonder if Meerkat will attract a younger demographic, like Snapchat?

Apple will release three different iPhones in the second half of 2015, the iPhone 6S, iPhone 6S Plus and a 4-inch device currently being referred to as iPhone 6C, according to industry sources.

All makes sense – the 4in device, the fingerprint, the NFC.