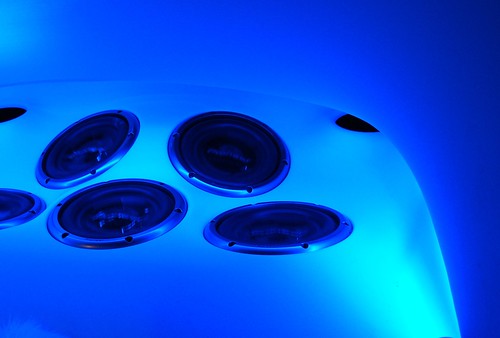 Loudness: YouTube’s getting rid of it. Photo by jonlclark on Flickr.

A selection of 8 links for you. Delight oozes from every pore. I’m charlesarthur on Twitter. Observations and links welcome.

Map: The strange things people Google in every state » The Washington Post

What strange goods and services is your state researching on Google? Apparently California has been looking into the price of facelifts, tummy tucks, swimming pools and marriage licenses, while Oklahoma is curious about the cost of breast lifts, liposuction, gas and daycare, according to Fixr.com, a cost-estimating website.

Fixr created the map below with Google Autocomplete, typing “How much does * cost in Sacramento, California?” into Google for each state or state capital, and then marking down the most commonly searched-for good or service.

Sharp to ax more than 10% of Japanese workforce: Nikkei » Reuters

Sharp Corp is cutting more than 10% of its Japanese workforce starting in April, according to a Nikkei report.

The embattled electronics manufacturer will slash about 3,000 jobs through voluntary retirements and expects to book about 30bn yen ($250m) in retirement-related expenses for 2015, the business daily said.

Sharp’s could also shed its North American television business as part of its plans to restructure operations in unprofitable businesses, the Nikkei said.

What does this mean ?
It means that YouTube have been using loudness normalisation on their music videos – and they’ve been doing it since December last year. Everything plays at a similar loudness, regardless of how it was mastered. And no-one has noticed.

Hear it for yourself – this playlist is composed almost entirely of current releases, with a wide variety of loudness on CD – and some of them are REALLY loud:

So for example, at the more dynamic end of the spectrum, Mark Ronson & Bruno Mars’ massive hit ”Uptown Funk” measures -12 LUFS (DR 8 on the TT Meter) on CD. Whereas “Love Me Like You Do” by Ellie Goulding is squashed up to -8 LUFS (DR 5) on CD, and later in the playlist, Madonna’s “Living For Love” clocks in at an eye-watering (and heavily distorted) -7 LUFS (DR 4!)

But on YouTube, all of them are being played back at a similar loudness of roughly -13 LUFS.

What this means is that songs with greater dynamic range – from quiet to loud – will be able to stand out. And those which just crank the volume to 11 won’t.

Interesting too that as with app review, Google has quietly done this and made no noise about it.

Words can’t describe how great this is. Let’s see if an image will…

Nah, you have to see them collected together to get the full horror.

Website advertisement companies have found a way to circumvent the protections introduced in iOS 8 to stop users from being kicked to the App Store because of certain cleverly-coded JavaScript advertisements.

I am now experiencing this myself, and it makes browsing on the iPhone unusable. Browsing to websites such as Reddit and Reuters and others now automatically open the App Store. In many cases, there is no way for me to read the actual content on the pages. You can see this happen in this video.

The sites he has problems with – Reddit, Macstories, Venturebeat, and more – load OK on the iPhone I’m using, but after the page has loaded the “data” dial keeps spinning, which implies it’s trying to load something. Mayo might have something set up differently. And this is definitely a problem. It also affects Android users. The blame is clearly on unscrupulous advertisers.

When will Apple build a weightless laptop? Let 26 years’ data tell us » The Overspill

I looked at trends in the weights, volumes and densities of Apple laptops:

when you start adding in the data about various laptop launches, trying to focus on the ones which are 12in or 13in (so that the screen size, and hence weight, is comparable), you find a definite trend.

It’s this: if we were relying on straight-line trends, we’d have weightless MacBooks by 2017. Yes. Perhaps they’d be airtight and filled with helium? Why not?

(Does this make me a link farm? Hope not.)

In parallel with Android’s game session growth, CPIs (Cost Per Install) — which can be used an approximation for lifetime value (LTV) — have surged by 41% from February 2014 to February 2015.

As we all know, app installs have become a major business. And as mobile gaming continues to be the leading driver of mobile revenues, a shift of gaming sessions in Tier 1 markets could be an early indicator of Google Play approaching parity with the iOS App Store.

It’s not a huge surprise to our CEO and co-founder Maria Alegre who says that over the past year she’s noticed developers have been thinking about more than one platform when launching campaigns. “While iOS has typically been where game developers start with user acquisition, we see the window of exclusive focus on iOS shrinking,” she says.

Alegre believes 2015 will indeed be the year where Android becomes more relevant than iOS. Though iOS will continue to have higher unit economics, the differences between iOS ARPU (Average Revenue Per User) and Android ARPU are shrinking — while Android’s mobile game sessions are growing month over month. “That combination of higher traffic and smaller difference between ARPU will make Android overall a more attractive business opportunity,” she predicts.

The report covers North, South and Central America. Not surprising that Android total sessions would pass iOS, since once you add in south and central America, Android ownership hugely outnumbers iOS (most of which will be in the US and Canada). (The full country data – available through the report – shows some weird changes, such as huge increase in iOS gameplay in Spain and Finland. Go figure.)

The surprise is in the suggestion that Android ARPU in the Americas is approaching that of iOS, since you’d expect many of the new Android users to be non-premium. Either iOS ARPU is falling generally, or something odd is happening with Android premium.

Jonathan Deutsch came to my notice through a fantastic, simple app called Hyperedit (which lets you write HTML/PHP/CSS code and see it directly rendered in an adjacent screen). Since then he’s been employed by Apple, and then left Apple, and now has Tumult Hype Pro, which uses HTML5 capabilities.

I wish I were capable enough to use this program to anything like its capabilities.