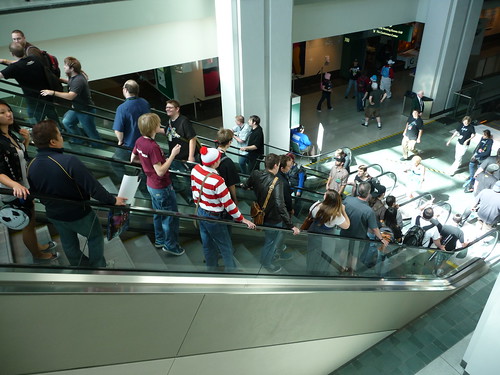 OK, definitely seen harder than that. Photo by health_bar on Flickr.

A selection of 9 links for you. Do not plant in acidic soil. I’m charlesarthur on Twitter. Observations and links welcome.

Due to me screwing up, the headline yesterday about finding Waldo referred to an article that’s in today’s list. Hope you didn’t spend too long looking for it.

Is there a battle looming in the UK between Apple Pay and Zapp? » Mobile Payments Today

While Apple has yet to reveal a hard date for Apple Pay’s launch in the UK, pundits speculate that it could happen in April. This also happens to be about the same time Zapp is supposed to make its debut in the U.K.

Zapp relies on banks building it into their mobile apps, although as those banks own Zapp’s parent company, this shouldn’t be too much of a problem. The system is intended to provide real-time payments between consumers and merchants — both online and at the point of sale — without the need for a digital wallet. Zapp will generate digital tokens that will hide customer bank account details from merchants, and it is intended to work with different technologies such as NFC, Bluetooth, QR codes and PIN-entry point-of-sale terminals.

Zapp, however, has faced launch delays since at least the third quarter of 2014. Meantime, it announced in October retail partnerships that will go into effect this year. Asda, Sainsbury’s, House of Fraser and Shop Direct are among some of the major High Street retailers that will support Zapp. Earlier in the year, HSBC, first direct, Nationwide, Santander and Metro Bank announced their support for the system.

I’d never heard of Zapp either. Apparently it’s “a mobile payments system from Vocalink, which created the Faster Payments Service and is owned by all the major UK banks.”

Zapp has lots of benefits (cost, data sharing with retailers) and so could have a UK advantage – this is a good article for getting an idea of the competitive landscape in the UK as Apple prepares to land.

Apparently, your Android Wear smartwatch can be taught to do cooler tricks – cooler than, say, playing Minecraft or Doom, or even running Windows 95. Once again, smart hacker Corbin Davenport has shown us that there’s a lot of stuff – not necessarily important world-changing stuff – just a lot of stuff that can be done to your Android Wear smartwatch when you have a lot of time on your hands.

“You haven’t watched a movie—until you’ve watched it on your watch,” Davenport proudly proclaims of his newest wild idea, which he shows via YouTube. The demo shows Davenport playing Star Trek: Into Darkness on his Android Wear, which is probably a delightful coincidence as he shows us that Android Wear devices can really go where no smartwatch has gone before (excuse the pun, we couldn’t help it).

Davenport has done some weird, weird stuff there.

According to the latest research from [the] Market Monitor program for Q4 2014 (Oct-Dec), total mobile phone shipments for India, Indonesia and Bangladesh stood at 89m as smartphone demand skyrocketed and the total smartphone shipments contributed to more than a third of all mobile phones shipped during the quarter. These three markets combined offers an opportunity for mobile phone industry players looking to grow beyond the saturating China mobile phone market.

“Smartphone growth in these regions touches almost all the price segments with regional brands being prominent in the entry level smartphone segment. Apart from this we have seen Chinese vendors entering these geographies for the first time in CY 2014 and enjoyed a significant success rate. However it will be important to keep an eye on  Online only players on how they capture the smartphone growth in rural areas in these regions” says Tina Lu Sr. Consultant at Counterpoint research

Mobile phones, not just smartphones – note. By comparison, Japan bought about 25.7m smartphones in 2014 and that is expected to rise to 27m in 2015. (About half of that total would be iPhones, judging by Kantar’s figure.)

Graham Cluley on a Japanese hacker who caused lots of problems via trojan-infected PCs in Japan in 2012:

the police arrested four separate people, and allegedly managed to “extract” confessions from some of those whose computers had posted death threats to a popular messageboard.

However, the confessions were clearly unreliable (one wonders how the confessors were “encouraged” to make them), as the suspects had in fact had their computers infected by the hacker’s malware, which had posted the death threats without their knowing.

It became clear to the police that they had made a colossal blunder, when the hacker – who went by the alias Oni Koroshi (Demon Killer) – continued to send taunting emails to the police force and local newspapers.

You can just imagine how embarrassing that must have been for the Japanese police, in what was becoming a high profile case.

Er.. yeah. But then it gets utterly weird, when the hacker sends a series of clues to the police, and it all ends up with a showdown involving a cat, an island and a sikrit chip worn on the cat. If Ian Fleming were alive today and writing this stuff you’d call it too far-fetched.

(Also, stupid hacker. Should have stopped when the people confessed.)

The Drug Enforcement Agency is using its license plate reader program not only to track drivers’ locations, but also to photograph these drivers and their passengers, according to newly disclosed records obtained by the ACLU via a Freedom of Information Act request.

One internal 2009 DEA communication stated clearly that the license plate program can provide “the requester” with images that “may include vehicle license plate numbers (front and/or rear), photos of visible vehicle occupants [redacted] and a front and rear overall view of the vehicle.” Clearly showing that occupant photos are not an occasional, accidental byproduct of the technology, but one that is intentionally being cultivated, a 2011 email states that the DEA’s system has the ability to store “up to 10 photos per vehicle transaction including 4 occupant photos.”…

…Some law enforcement agencies that employ ALPRs recognize that the technology should not be used to capture photos of vehicle occupants. We obtained an ALPR policy from Tiburon, California that speaks to our privacy concerns. The policy states that “cameras will be directed only to capture the rear of vehicles and not into any place where a ‘reasonable expectation of privacy’ might exist.”

Tricky argument. You can see that it would be useful for law enforcement to know who’s driving a car. And do you have “a reasonable expectation of privacy” when you’re driving a car on a public road where people can take pictures of you and your car – as happens here?

(By the way, in the UK we call it an “Automatic Number Plate Reader”. Even though it now has letters and numbers.)

There’s no metric more important to the social network than the number of people that use the service — more specifically, its monthly active users, or MAUs. Recent events inside the company show how sensitive Twitter’s top brass can be about this number, which also partly explains the company’s push to use other metrics to showcase Twitter’s reach.

The company used to grant all employees access to its MAU figure through an internal intranet, but that access was revoked a few weeks ago, according to multiple sources familiar with change. Now, the MAU metric is only available on a need-to-know basis.

There has been so much noise ahead of Twitter’s results (which came out after I added this) that one has to feel there’s something weird going on there. A culture clash? Internal political struggle? Whatever, this will be the year it plays out.

Any tech journalist worth his silicon would probably assume that Xiaomi intends to finally push into the US market to take on the likes of Apple and Samsung, possibly even with new mobile hardware. But apparently that’s not the case. We specifically asked Xiaomi’s PR representative about the possibility of a North American expansion, and this is the response that we were given:

We can also confirm that Xiaomi will not be launching in the US or entering the US market this time, but this is an opportunity to get to know the company and leadership a bit more.​

Any tech journalist worth her or his silicon would know that Xiaomi would face insuperable IP issues in trying to enter the US market, and also that it’s simply the wrong sort of market to try to get in to just now for Xiaomi.

At least they called Xiaomi to have their castles in the air shot down.

Chromecast, which made its debut in July 2013, now supports more than 350 apps and services, including YouTube, Tving and Hoppin in Korea.

It started selling the device in Korea in May 2014, the first marketing debut in the Asian market.

This number sounds entirely feasible; it also sounds like the sort of thing that Google Korea might blurt out, when its corporate headquarters has only ever said “millions”.

Ten million is pretty impressive. Now, of course, we can divide all the numbers it has put out to get average use, such as its “used for one billion ‘casts’” stat in the January earnings call: that works out to an average of about 100 “casts” per device over the whole of 2014 (but of course not all were in use all through 2014).

I decided to approach this problem as a traveling salesman problem: We need to check every possible location that Waldo could be at while taking as little time as possible. That means we need to cover as much ground as possible without any backtracking.

In computer terms, that means we’re making a list of all 68 points that Waldo could be at, then sorting them based on the order that we’re going to visit them. So now we just need to try every possible arrangement of the points and find the one with the shortest distance traveled. Easy, right? Wrong.

Those 68 points can be arranged in ~2.48 x 1096 possible ways. To provide some context, that’s more possible arrangements than the number of atoms in the universe. That’s so many possible arrangements that even if finding Waldo became an international priority and the world banded together to dedicate the 8.25 million computing cores from the world’s 10 largest supercomputers to the job, it would still take ~9.53 x 1077 years — about 6.35 x 1067x longer than the universe has existed — to exhaustively evaluate all possible combinations. (Generously assuming that each core could perform 10,000 evaluations per second.) In other words: if we don’t have a smarter solution, Waldo is as gone as Carmen Sandiego.

I admit I was disappointed that he didn’t do it by image recognition. And anyhow, his solution (probable regions) doesn’t help you at all with Wizard Whitebeard, Wenda, Wilma, Odlaw, Woof or the Waldo Watchers.