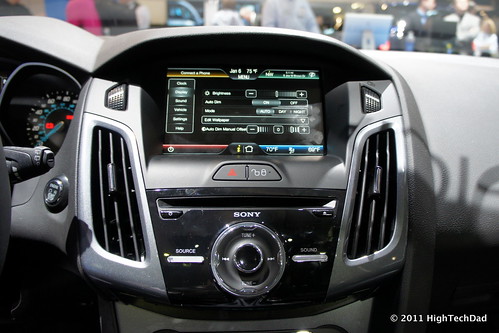 Ford MyTouch, powered by Microsoft. Well, not in the future. Photo by HighTechDad on Flickr.

A selection of 10 links for you. Choking hazard in children under 3. I’m charlesarthur on Twitter. Observations and links welcome.

Project Goliath: Inside Hollywood’s secret war against Google >> The Verge

What is “Goliath” and why are Hollywood’s most powerful lawyers working to kill it?

In dozens of recently leaked emails from the Sony hack, lawyers from the MPAA and six major studios talk about “Goliath” as their most powerful and politically relevant adversary in the fight against online piracy. They speak of “the problems created by Goliath,” and worry “what Goliath could do if it went on the attack.” Together they mount a multi-year effort to “respond to / rebut Goliath’s public advocacy” and “amplify negative Goliath news.” And while it’s hard to say for sure, significant evidence suggests that the studio efforts may be directed against Google.

The Sony hack is laying bare huge amounts of the entertainment industry’s thinking. Read on for more.

Researchers have uncovered yet another international espionage campaign that’s so sophisticated and comprehensive that it could only have been developed with the backing of a well resourced country.

Inception, as the malware is dubbed in a report published Tuesday by Blue Coat Labs, targets devices running Windows, Android, BlackBerry, and iOS, and uses free accounts on Swedish cloud service Cloudme to collect pilfered data. Malware infecting Android handsets records incoming and outgoing phone calls to MP4 sound files that are periodically uploaded to the attackers. The researchers also uncovered evidence of an MMS phishing campaign designed to work on at least 60 mobile networks in multiple countries in an attempt to infect targeted individuals.

“There clearly is a well-resourced and very professional organization behind Inception, with precise targets and intentions that could be widespread and harmful,” the Blue Coat report stated. “The complex attack framework shows signs of automation and seasoned programming, and the number of layers used to protect the payload of the attack and to obfuscate the identity of the attackers is extremely advanced, if not paranoid.”

Ford is upgrading its infotainment system to make it more like a smartphone or tablet – and it is dumping its longtime software provider Microsoft as part of the change.

Instead, Ford (F) will use BlackBerry’s QNX operating system for the new Sync 3 infotainment system. Ford Sync allows drivers to navigate, listen to radio and music, make phone calls and control the car’s climate through touch or voice commands.

Among Sync 3’s improvements will be the ability to expand or shrink the display with pinch-to-zoom gestures. Customers will also be able to swipe the screen’s display, as they do on a smartphone or tablet.

Wonder if it’s anything to do with the glitches in MyTouch that surfaced in 2011, when it said it “will send memory sticks to 250,000 customers in the US offering a software upgrades for its glitch-prone MyFord Touch system, which replaces the standard dashboard knobs and buttons with a touchscreen.”

A win for BlackBerry’s QNX, though unlikely to be a dramatic money-earner for a while, if ever.

Through the first three months of 2014, “Happy” was streamed 43m times on Pandora, while “All Of Me” was played 55 million times on the service.

But how much money did all those streams make for the artists involved in creating the tracks?

According to an email from Sony/ATV head Martin Bandier obtained by Digital Music News’ Paul Resnikoff, “Happy” brought in just $2,700 in publisher and songwriter royalties in the first quarter of this year, while “All Of Me” yielded just $3,400.

Unlike Ed Bott and Tom Warren I still use a 1020 as my main phone. I like the platform and I like not taking a separate camera with me. It was great for taking snaps on holiday in Norway. But I cannot survive professionally with just Windows Phone. It seems now that a majority of gadgets I review come with a supporting app … for iOS or Android.

Microsoft is capable of making sense of Windows Phone, particularly in business, whether it can integrate with Office 365, Active Directory and Azure Active Directory. On the consumer side there is more that could be done to tie with Windows and Xbox. Microsoft is a software company and could do some great first party apps for the platform (where are they?).

The signs today though are not good. Since the acquisition we have had some mid-range device launches but little to excite. The sense now is that we are waiting for Windows 10 and Universal Apps (single projects that target both phone and full Windows) to bring it together. Windows 10 though: launch in the second half of 2015 is a long time to wait. If Windows Phone market share diminishes between then and now, there may not be much left to revive.

Windows 10 and unified development won’t be Windows Phone’s saviour; mobile apps aren’t shrunken mobile apps (just look at a desktop website shrunken down to a mobile screen to realise that).

And the very first comment is from someone who has given up on Windows Phone. These are not good signs.

With WebRTC, the Skype’s no longer the limit >> Reuters

WebRTC, a free browser-based technology, looks set to change the way we communicate and collaborate, up-ending telecoms firms, online chat services like Skype and WhatsApp and remote conferencing on WebEx.

Web Real-Time Communication is a proposed Internet standard that would make audio and video as seamless as browsing text and images is now. Installed as part of the browser, video chatting is just a click away – with no need to download an app or register for a service.

WebRTC allows anyone to embed real-time voice, data and video communications into browsers, programs – more or less anything with a chip inside. Already, you can use a WebRTC-compatible browser like Mozilla’s Firefox to start a video call just by sending someone a link.

A terrific desktop browser technology that feels like it’s five or six years too late in reaching a standard. Video calling is on mobiles now, in a variety of different (incompatible) protocols, some cross-platform, some not.

The leaked emails reveal that Google responded furiously to the perceived slur [in a press release put out by the MPAA in reaction to Google’s press release about its changes to its algorithm].

“At the highest levels [Google are] extremely unhappy with our statement,” an email from the MPAA to the studios reads.

“[Google] conveyed that they feel as if they went above and beyond what the law requires; that they bent over backwards to give us a heads up and in return we put out a ‘snarky’ statement that gave them no credit for the positive direction.”

In response to the snub, Google pressed the ‘ignore’ button. A top executive at Google’s policy department told the MPAA that his company would no longer “speak or do business” with the movie group.

In future Google would speak with the studios directly, since “at least three” had already informed the search engine that they “were very happy about the new features.”

Tablet Ownership is Growing Faster than Ownership of Any Other Connected Device, According to The NPD Group

Tablet ownership among US consumers is on the rise, and growing at a faster rate than that of any other connected device. According to The NPD Group’s Connected Intelligence, Connected Home Report, as of the third quarter of 2014 (Q3 2014) there were 109m tablets in use, up 35m from last year.

“Now that the tablet market is unmistakably past the early adopter stage we are able to gain visibility into what the user base is still doing with their devices, and in this case it’s often video focused activities,” said John Buffone, executive director, Connected Intelligence.

More than half, 55%, of tablet users report leveraging a video feature of their device. This includes video calling; taking, posting, and uploading videos; as well as watching video from a streaming service or app from a TV channel or pay TV provider. Video feature usage is even more prominent among younger consumers. Two-thirds (67%) of tablet users aged 18-34 use these video features compared to 53% of 35-54 year olds, and 45% of users age 55 and older. Further, watching video from a streaming service or TV channel app is the most common video focused behaviour.

By contrast, there are 176m smartphones in use, for the same population. You wonder why tablet sales are slowing at the high end (Apple)? Because the high end is saturated, and tablets probably have a four-year, not two-year, replacement cycle.

And video usage is going to suck the life out of the networks.

Examples of tasks that can be accomplished with Workflow, as noted by developer DeskConnect, include:

Once an automated task has been created within Workflow, users can launch them from within the app, or via other apps using a Workflow Action Extension, in addition to the aforementioned home screen shortcut.

There are location-aware actions, and you can create a homescreen shortcut to call someone (that was the first one I created). Wonder if this – with its capability of putting shortcuts on the homecreen – will fall foul of Apple’s hokey-cokey app store policies.

Google launched engineering operations in the country in 2006, and its programmers, including a top coder named Petr Mitrichev, work on Web-search quality, developer tools and the Chrome browser, among other projects. It has a sizable Moscow office. Sales operations are expected to continue in some form.

It’s unclear exactly why Google is making the move now, but it is likely related to the Russian government’s decision to require Web companies, starting in 2016, to keep data related to its citizens within Russia as opposed to data centers outside the country. There also was an alleged recent raid by authorities of a high-profile foreign e-commerce firm in Moscow that sent shockwaves throughout the tech community.

Google’s flight from Russia follows similar moves by other well-known firms including Adobe Systems. Western venture and private equity firms also have pulled back their activities in Russia.

I think Efrati had the scoop on this; the WSJ followed it up.