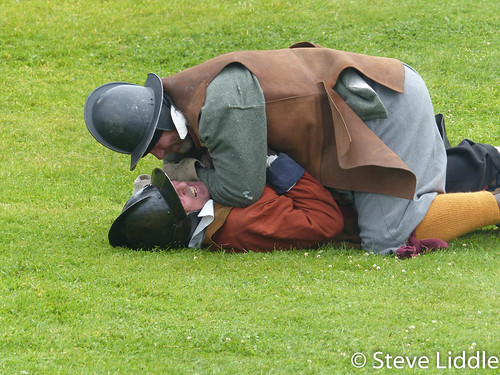 Just another meeting between Nest and Dropcam. Creative Commons-licensed photo by Steve Liddle on Flickr.

You can now sign up to receive each day’s Start Up post by email (though you won’t see any instalments for a week, because I’ll be away). You’ll need to click a confirmation link, so no spam.

A selection of 9 links for you. There are no April Fools in this, thank God. I’m charlesarthur on Twitter. Observations and links welcome.

Please note: next week The Overspill will be on a spring break.

Mark Bergen with a remarkable scoop:

»Nest generated about $340m in sales last year, according to three people with knowledge of the matter. That’s an impressive figure for a company in the very nascent market of Internet-connected devices.

But it’s below the initial expectations Google had set for Nest when it bought the startup in 2014 for a whopping $3.2bn. The company’s sales performance may face even deeper scrutiny inside Google’s new parent company, Alphabet, where Nest now sits, as the hardware maker faces its most critical year ever.

Nest’s plight is a far cry from two years ago, when it was brought on as one of Google’s biggest acquisitions as a vehicle to compete with Apple in the growing smart-home market. Google also brought on CEO Tony Fadell, a former Apple exec, to inject Google with Apple’s hardware sensibility. But now its future is up in the air, as it’s clearly fallen short of those lofty expectations…

…To keep employees from leaving after the acquisition, Google created a vesting schedule that prevents Nest’s executives from cashing out their shares before a certain date — that date could come as soon as this year. In addition, according to sources, as part of the acquisition, Nest and Google agreed on a sales target for the company: $300m annually.

Two years later, Nest still could not hit that target alone — it did it only after adding sales from Dropcam, which Nest acquired for $555m six months after joining Google.

It’s pretty clear from the past week, starting with Reed Albergotti’s amazing piece for The Information, that there’s almost open warfare between Nest and Dropcam. The last detail, about Dropcam making up the sales number, could only have come from a senior Dropcam source who knows the revenues in some detail.

The question now is, what will Larry Page – chief executive of Alphabet, and so Nest – do?

Worldwide combined shipments for devices (PCs, tablets, ultramobiles and mobile phones) are expected to reach 2.4bn units in 2016, a 0.6% increase from 2015. End-user spending in constant US dollars is estimated to decline by 1.6% year on year…

…”The double-digit growth era for the global smartphone market has come to an end,” said Ranjit Atwal, research director at Gartner. “Historically, worsening economic conditions had negligible impact on smartphone sales and spend, but this is no longer the case. China and North America smartphone sales are on pace to be flat in 2016, exhibiting a 0.7% and 0.4% growth respectively.”

While smartphone sales will continue to grow in emerging markets, the growth will slow down. Gartner predicts that, through 2019, 150 million users will delay upgrades to smartphones in emerging Asia/Pacific, until the functionality and price combination of a low-cost smartphone becomes more desirable.

“Prices did not decline enough to drive upgrades from low-end feature phones to low-end smartphones,” said Annette Zimmermann, research director at Gartner. “Vendors were not able to reduce the price of a ‘good enough to use’ smartphone lower than $50.”

So $50 seems to be the baseline price that smartphones can’t go below. Still, they’ll make up 79% of sales; that only leaves 400m featurephones to be sold.
link to this extract

3 in 10 would consider buying an iPhone » Global Web Index

»With many seeing Apple’s more affordable iPhone SE handset as an attempt to win new customers in fast-growth markets, today we look at where the iPhone name resonates the most strongly.

Globally, it’s almost 3 in 10 internet users who say they would consider purchasing an iPhone – putting Apple at the top of the table, just ahead of Samsung on 24%.

But split this by country and it’s clear that the iPhone has its biggest appeal in emerging markets. Although as many as 25% in places like the UK and USA as well as 20% in Japan would consider getting one, fast-growth markets occupy 14 of the top 15 slots (including China and India, which are particularly key given their booming numbers of internet users).

“Would consider” is a long way from “will buy” which is some distance from “bought”. But it shows Apple’s power as an aspirational brand that it’s emerging markets where people want it.
link to this extract

»As a growing number of US hospitals report ransomware attacks, researchers are warning of a new strain of ransomware targeting the healthcare sector that attacks servers in order to lock up entire networks.

Unlike most other malware that encrypts data and demands ransom for its release, the Samas strain of ransomware does not rely on user-focused attack vectors such as phishing emails.

Instead, Samas – also known as Samsam and MSIL.B/C – is distributed by compromising servers and using them to move laterally through networks to encrypt and hold multiple data sets to ransom.

Interesting evolution of this malware: clearly it has staying power.
link to this extract

»When I started this project, I sought to make a difference in Barcelona. Now you can find tons of bike sharing apps that use our API on all major platforms. It doesn’t matter that these are not our own apps. They are solving the same problem we were trying to fix, so their success is our success.

Besides popular apps like Moovit or CityMapper, there are many neat projects out there, some of which are published under free software licenses. Ideally, a city council could create a customization of any of these apps for their own use.

Most official applications for bike sharing systems have terrible ratings. The core business of transportation companies is running a service, so they have no real motivation to create an engaging UI or innovate further. In some cases, the city council does not even own the rights to the data, being completely at the mercy of the company providing the transportation service.

When providing public services, city councils and companies often get lost in what they should offer as an aid to the service. They focus on a nice map or a flashy application, rather than providing the data behind these service aids. Maps, apps, and websites have a limited focus and usually serve a single purpose. On the other hand, data is malleable and the purest form of representation. While you can’t create something new from looking and playing with a static map (except, of course, if you scrape it), data can be used to create countless different iterations, help with research. It can even provide a bridge that will allow anyone to participate, improve and build on top of these aids to public services.

»Yahoo’s ad revenues are forecasted to drop 14% this year while its competitors, including Google and Facebook, are expected to grow.

According to a new eMarketer report on ad spending, Yahoo’s global ad revenues will dip to $2.8 billion this year, down from $3.3bn last year. Its overall share of the ad market will shrink from 2.1% to 1.5%.

That’s more bad news for the Marissa Mayer-led company. In an attempt to cut $400m, Yahoo announced last month that it’s in the process of shuttering offices, slashing 15% of its workforce and is backing away from its once-ambitious content efforts by closing down a number of its verticals, like Travel and Autos. All of this is happening while rumors swirl that Yahoo is considering selling itself.

Yahoo is the BlackBerry of the online ad business.
link to this extract

Why I got rid of Adblock Plus » David Hewson

Hewson is a novelist and journalist:

»Ad blockers take away important revenue streams from companies that need them. Only last week the Independent, where I worked during its launch thirty years ago, shut up shop as a print title. I don’t suggest for one moment it would have survived if ad blockers didn’t exist. But it might have done a little better. The Guardian now, like more and more titles, nags you to turn off its ad blocker these days. Given the phenomenal losses it’s incurring — £53m last year — who can blame it? If things don’t turn round it could be the next to go — and what a loss that would be.

So turning off the ad blocker pays a little towards the news I read for free and I’m happy to go along with that idea. But something else changed my mind too, and it was, oddly enough, a speech by the Culture Secretary, John Whittingdale, in which he described ad-blocking as ‘a modern-day protection racket’. Nor is he the only one to think this.

Whittingdale’s ire was actually aimed at Eyeo (purveyor of Adblock Plus); there are however other adblocking solutions which don’t use Eyeo’s systems. The problems at The Guardian and The Independent aren’t caused by adblocking, though.
link to this extract

»Volvo’s North American CEO, Lex Kerssemakers, lost his cool as the automaker’s semi-autonomous prototype sporadically refused to drive itself during a press event at the Los Angeles Auto Show.

“It can’t find the lane markings!” Kerssemakers griped to Mayor Eric Garcetti, who was at the wheel. “You need to paint the bloody roads here!”

Shoddy infrastructure has become a roadblock to the development of self-driving cars, vexing engineers and adding time and cost. Poor markings and uneven signage on the 3 million miles of paved roads in the United States are forcing automakers to develop more sophisticated sensors and maps to compensate, industry executives say.

An estimated 65% of U.S. roads are in poor condition, according to the U.S. Department of Transportation, with the transportation infrastructure system rated 12th in the World Economic Forum’s 2014-2015 global competitiveness report.

Make America Navigable By Autonomous Cars Agai.. um, For The First Time.
link to this extract

»Citymapper is making a significant change to its routing app with the news that it has added what it is calling a “SuperRouter” capability. This effectively combines public transit with cabs to create completely new integrated routes. In simple terms, it means you could ask Citymapper’s app to come up with a route, and it would give you options both a cab service like Uber and a train or tram in a fully integrated route, with all the timetables. That could be transformational for people in cities, and something no other platform has tried to date, as far as we know. The change will apply to every city Citymapper is launched in right now, which includes New York, San Francisco, LA, London, Paris, Berlin, Rome, Madrid, Tokyo and many other global cities.

In normal circumstances it’s basically impossible to plan a journey across public and private car transport. That leads to what you might call unfair discrimination between these transport modes. But in the 21st century, where private cars can be tracked on a map, there is simply no reason for this separation to exist.

None at all! Except that it’s difficult.
link to this extract