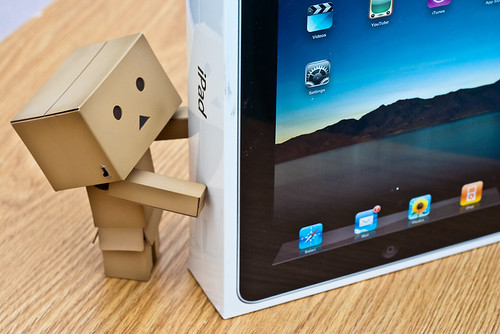 “Finally, I got my iPad” by juehuayin on Flickr

Worldwide tablet growth expected to slow to 7.2% in 2014 along with first year of iPad decline >> IDC

The worldwide tablet market is expected to see a massive deceleration in 2014 with year-over-year growth slowing to 7.2%, down from 52.5% in 2013, according to a new forecast from International Data Corporation (IDC). At the core of this slowdown is the expectation that 2014 will represent the first full year of decline in Apple iPad shipments. Both the iPad and the overall market slowdown do not come as a surprise as device lifecycles for tablets have continued to lengthen, increasingly resembling those of PCs more than smartphones.

“The tablet market continues to be impacted by a few major trends happening in relevant markets,” said Ryan Reith, Program Director with IDC’s Worldwide Quarterly Mobile Device Trackers. “In the early stages of the tablet market, device lifecycles were expected to resemble those of smartphones, with replacement occurring every 2-3 years. What has played out instead is that many tablet owners are holding onto their devices for more than 3 years and in some instances more than 4 years. We believe the two major drivers for longer than expected tablet lifecycles are legacy software support for older products, especially within iOS, and the increased use of smartphones for a variety of computing tasks.”

Previous versions of the map have existed since 2011, but this is now the largest publicly accessible toilet database in the UK by some way. It has over 9500 toilets, and I’d be confident of saying that the map will help you to find toilets no matter where you live.

If for some inexplicable reason it doesn’t, you can add, edit and remove toilets until it does! We’ve had over 1000 toilets added this week.

AT LAST. I judged a competition in April 2011 where this was one of the entries – and nearly the winner.

[Mark] Trammell [a designer formerly at Digg and Twitter] likes to interview customers in their homes, sometimes in the moment when a Sonos speaker first arrives and a family is taking it out of the box and deciding where it should go.

“They’re looking for a Sonos-size hole to fill,” he says. The small Play:1 is good for bathrooms and kitchens; the Play:5 tends to go in living rooms and dens. The accessories allow for attaching other kinds of sound equipment, such as weatherproof outdoor speakers, to the network. The average Sonos household has 2.1 units.

A key moment tends to be when family members discover how to add to and remix playlists together. Mark Whitten, Sonos’s chief product officer, compares the experience to that of the Xbox. “The reason gaming consoles became ascendant wasn’t because of the games,” he says. “It’s because two kids were sitting on a couch, playing together.” Whitten was hired six months ago from Microsoft, where he introduced and oversaw much of the Xbox, including Xbox Live.

On an upward curve. Will someone buy them?

Late last year, a report from a Federal Aviation Administration taskforce on cockpit technology documented a growing link between crashes and an over-reliance on automation. Pilots have become “accustomed to watching things happen, and reacting, instead of being proactive,” the panel warned. The FAA is now urging airlines to get pilots to spend more time flying by hand…

…Ten years ago, information scientists at Utrecht University in the Netherlands had a group of people carry out complicated analytical and planning tasks using either rudimentary software that provided no assistance or sophisticated software that offered a great deal of aid. The researchers found that the people using the simple software developed better strategies, made fewer mistakes and developed a deeper aptitude for the work. The people using the more advanced software, meanwhile, would often “aimlessly click around” when confronted with a tricky problem. The supposedly helpful software actually short-circuited their thinking and learning.

Worth reading in depth if you’re interested in how security services operate, and what they can (and can’t) get from data. For example: the killers were known, but low priority; a tapping order took a month to be signed; submarine cables are tapped, but even if their discussions had been picked up by them, the fact neither was under “active” observation means key comments would have been missed.

I wrote on the report:

the ISC [Intelligence Services Committee] has a point here. As the report highlights, when internet companies discover accounts associated with child exploitation, they are quick to pass on details to the authorities. But if someone suggests “let’s kill a soldier” in a message, the account is marked for closure. Adebowale had four out of seven internet accounts at one provider automatically closed over suspected terror-related activity; yet none was reviewed by a human. That’s a clear failure to link the action – closing an account – and the reason; communications companies can’t seek public approval for trying to prevent child exploitation, yet wash their hands of terrorism discussions.

The BBC is saying that the Adebowale comment was made on Facebook. Expect more developments in the next few days.

Facing domination from ARM-based processor suppliers such as Qualcomm and MediaTek, Intel’s subsidies including those for marketing, have helped reduce vendors’ costs by around US$20-30 and have attracted vendors such as Asustek Computer, Acer and Lenovo to place orders for Intel’s processors, the sources noted.

Although the strategy helps Intel to maintain a share of around 90% in the notebook market, the strategy has taken a heavy toll out of Intel in the mobile device market as the company has generated about US$7bn of losses from its mobile and communications business during the past two years and will continue to see losses in the fourth quarter, the sources noted.

Internally, Intel has been debating about whether to stay in the tablet market, but the company has decided to push for the market since its absence could impact its PC business and create a hole in its Internet of thing (IoT) lineup, the sources explained.

The logic is sound. And $20-30 could make the difference between profit and loss for some tablet makers.

Jack Conte (half of Pomplamoose) does the numbers for the band’s recent self-financed tour:

…The point of publishing all the scary stats is not to dissuade people from being professional musicians. It’s simply an attempt to shine light on a new paradigm for professional artistry.

We’re entering a new era in history: the space between “starving artist” and “rich and famous” is beginning to collapse. YouTube has signed up over a million partners (people who agree to run ads over their videos to make money from their content). The “creative class” is no longer emerging: it’s here, now.

We, the creative class, are finding ways to make a living making music, drawing webcomics, writing articles, coding games, recording podcasts. Most people don’t know our names or faces. We are not on magazine covers at the grocery store. We are not rich, and we are not famous.

Trade in your iPhone >> BlackBerry Trade Up

Trade your iPhone for a BlackBerry Passport and get up to $550!

Upgrade to a BlackBerry® Passport and get up to $400 back for your iPhone and an additional $150 from BlackBerry. Subject to Terms and Conditions.

To qualify for this offer, you must have purchased a BlackBerry Passport from select online retailers on or after December 1st, 2014.

BlackBerry essentially gives you $150, and you get a tradein of $90-$400 depending on iPhone model. Doesn’t seem to tie you to owning the Passport for any length of time, so the arbitrage-minded might like to see how easy it would be to round-trip this: cheap secondhand iPhone from drawer -> get BlackBerry Passport -> sell off Passport -> get cheap iPhone -> repeat? The problem might lie in the third step though.

Unlikely there will be a rush of iPhone owners to bankrupt BlackBerry, but also gives an insight into roughly how much it values each user: must be more than $150 over typical contract length.

Whistling Google: PLEASE! Brussels can only hurt Europe, not us >> The Register

Google today wields enormous power over other industries, in a way Microsoft never could, even at the zenith of its influence. Newspapers didn’t close, and musicians didn’t go hungry, because Windows was late. No Active X control ever destroyed an economic sector. Yet you can plausibly argue that the consequences for European industry and its citizens freedoms are at least indirectly attributable to Google’s strategic use (and abuse) of other people’s property and personal effects…

…DCMA provisions were designed to protect ISPs and other service providers in the mid-1990s, when the public internet was in its infancy.

Today, they are favourable to huge internet aggregators, and load the deck against individuals and tiny companies seeking to protect their work. Google required the music company to promise not to sue an unlicensed uploader, thereby protecting Google’s supply chain. “You can sign and get a fraction of a penny,” Google was saying, “or you can refuse to sign and get nothing. It’s up to you – but either way, we’ll use your work and make money off it.”

As he points out, though, the European Commission is hopelessly screwed in both its aims and implementation of anything digital.