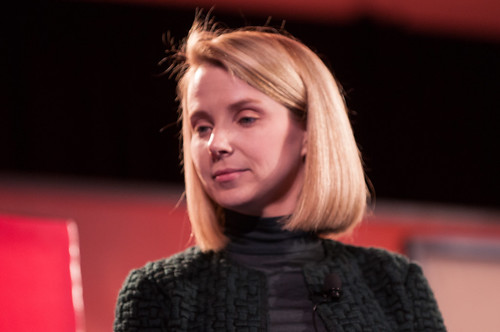 Marissa Mayer, CEO of Yahoo. You OK hun? Photo by jdlasica on Flickr.

A selection of 8 links for you. Count them, I dare you. I’m charlesarthur on Twitter. Observations and links welcome.

Office role-play? Meet the people who pretend to work at an office together » Fast Company

That’s what’s happening at one of the latest cult Facebook Groups, Generic Office Roleplay. Over 2,500 members from around the world fill its virtual pages with posts that mimic office-wide emails. There are passive aggressive notes about food stolen out of the fridge, mandates about office dress and office supplies, and tips for improving synergy. Think TV’s The Office meets David Rees’s clip Art cartoons, My New Filing Technique is Unstoppable meets live action role play (LARP), all happening on Facebook.

The term of choice for its practitioners is BLARPing—business live action role-play.

This is just wonderful.

Adi Sharabani and Yair Amit have revealed a zero-day vulnerability in iOS 8 that, when exploited by a malicious wireless hotspot, will repeatedly crash nearby Apple iPhones, iPads and iPods.

The Skycure bods say the attack, dubbed “No iOS Zone”, will render vulnerable iOS things within range unstable – or even entirely unusable by triggering constant reboots.

“Anyone can take any router and create a Wi-Fi hotspot that forces you to connect to their network, and then manipulate the traffic to cause apps and the operating system to crash,” Sharabani told the RSA security conference in San Francisco today.

The denial-of-service is triggered by manipulating SSL certificates sent to the iOS devices over Wi-Fi; specially crafted data will cause apps or possibly the operating system to crash.

Fix in the works. Somewhere.

South Korea’s No. 1 tech giant had sold a little over 200,000 units of the two smartphones here as of Sunday since their launch on April 10, sharply falling short of the 300,000 preorders, according to the data, indicating that earlier sales forecasts may be exaggerated…

…industry watchers have been painting rosy pictures of the gadgets, with Hong Kong-based industry tracker Counterpoint suggesting the two will sell more than 50m units this year, while some researchers even gave a 70m-unit forecast.

But some industry watchers say the 10-day sales figure is not alarming, given that South Korea’s already saturated smartphone market is currently dented by the country’s regulations on subsidies.

Korea may be a special case (and the story says carriers are pushing harder on subsidies). But I think Samsung might find the top end saturated. This is going to be fascinating to watch play out.

The U.S. has the highest average revenue per subscriber (ARPU) of the 29 countries sampled in the analysis at about $59. Yet as far as network speed goes, the U.S. ranks 26th out of 29, supplying an average connection of 7 Mbps. Meanwhile the lowest ARPU in the sample, $3, belongs to the Philippines, yet its two LTE operators deliver average speeds of 8 Mbps, ranking the country above the U.S.

The fastest LTE performance can now be found in Northern Europe, Spain, France, Hungary and South Korea, where speeds between 16 and 18 Mbps are the norm. But the differences in ARPU between them are huge. In Denmark, ARPU is around $19 a month. In Norway that number is $34, which is more in line with South Korea’s ARPU of $33 than it is with Norway’s neighbor just over the North Sea.

Within countries, the pattern – or lack thereof – was the same. In the U.K., EE has the distinction of having the fastest speeds (17.8 Mbps), seemingly justifying the $2 to $6 more it collects in ARPU over its competitors Vodafone and O2. But in the U.S. the opposite is true. T-Mobile has by far the fastest speeds (10 Mbps) compared to Verizon, AT&T and Sprint, but its ARPU is $49, undercutting its next cheapest competitor by $8 a month.

US 4G is more like European HSDPA+. But you try telling them that… (I’m a customer of Three in the UK, which offers 4G for free. I like it.)

At the event [on 30 April], Tesla “will explain the advantages of our solutions and why past battery options weren’t compelling (OK Elon said “sucked”),” Tesla’s IR manager Jeff Evanson wrote in an email to analysts and investors early Wednesday. “Sorry, no motorcycle…but that was a creative guess.”

Tesla Chief Executive Elon Musk said Tesla was working on a battery for homes and business back in February, when the company announced fourth-quarter results. Last month, Musk tweeted about a new “major product line” to be unveiled on April 30, saying only it was not a car.

Regular readers have known this since 3 April.

How Timehop was created » Business Insider

Maya Kosoff on Timehop, which has 19 staff but 15m registered users (of whom 7m check in every day) to see what they were doing exactly a year ago on social media:

When Jonathan Wegener and Benny Wong started Timehop in 2011, they were working on a completely different project: a Craigslist replacement. Wong and Wegener — self-proclaimed “Foursquare fanboys” — participated in Foursquare’s first-ever hackathon, and they ended up building out a product on top of Foursquare’s API that showed users where they checked in on Foursquare a year ago.

They appropriately called the product, which they built in eight hours, 4SquareAnd7YearsAgo.

“The original inspiration for it was the ghost in Mario Kart, where you get to race yourself in time trials after you’ve done a race,” Wegener says. “We thought it would be really interesting to do that with your Foursquare checkins.”

First time that a useful idea has taken inspiration from a game concept?

This is from January, where Mayer was asked whether Yahoo would try to knock Google off iOS as the search default (as it has on Firefox in the US – because Google didn’t bid, I understand):

I will take the question on the Safari deal. The Safari platform is basically one of the premiere search engine in the world, if not the premiere search engine in the world. We are definitely in the search distribution business. I think we stated that really clearly in the past and I think with Mozilla and also in addition we brought Amazon and eBay onboard with smaller distribution partnerships in Q4, we are in search distribution business and anyone who is in that business needs to be interested in the Safari deal.

The Safari users are among the most engaged and lucrative users in the world and it’s something that we would really like to be able to provide. We work really closely with Mozilla to ultimately bring to their users an experience that they designed and that they feel really suit those users and we welcome the opportunity with any other partner to do the same, particularly one with Apple’s volume and end user base.

I think when she said “the premiere search engine in the world”, she meant “one of the most-used browsers to access search engines”. Statcounter data suggests Safari was used for half of US smartphone and tablet use in March; if Mayer crazy enough to try to buy that search deal when it comes up later this year? (There’s no mention of it in the Q1 earnings transcript.)

So hated is AdBlock Plus, in fact, that a case was brought against the tool to try to prove that it is illegal.

Now a court in Hamburg has come to a decision, and ruled that AdBlock Plus – in case there was ever any doubt – is entirely legal. The plaintiffs in the case alleged that AdBlock Plus should not be permitted to block ads on the websites it owns. The judge presiding over the case disagreed.

The court ruled that AdBlock Plus is well within its rights to provide the option to hide advertisements on websites. The company sees this as setting a precedent and is taking this moment in the spotlight to reach out to content creators to work together to “develop new forms of nonintrusive ads that are actually useful and welcomed by users.”