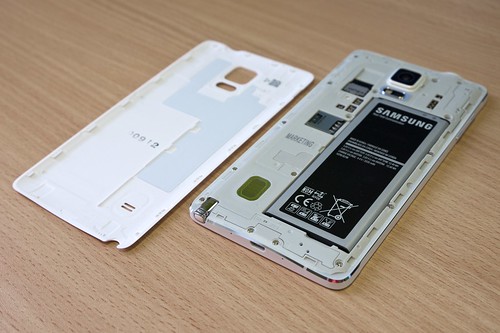 You’ll never believe what happens if you play it backwards. Photo by Janitors on Flickr.

A selection of 9 links for you. Show them eagerly to the person beside you! I’m charlesarthur on Twitter. Observations and links welcome.

UH OH: Windows 10 will share your WiFi key with your friends’ friends » The Register

A Windows 10 feature, Wi-Fi Sense, smells like a security risk: it shares WiFi passwords with the user’s contacts.

Those contacts include their Outlook.com (nee Hotmail) contacts, Skype contacts and, with an opt-in, their Facebook friends. There is method in the Microsoft madness – it saves having to shout across the office or house “what’s the Wi-Fi password?” – but ease of use has to be teamed with security. If you wander close to a wireless network, and your friend knows the password, and you both have Wi-Fi Sense, you can now log into that network.

Wi-Fi Sense doesn’t reveal the plaintext password to your family, friends, acquaintances, and the chap at the takeaway who’s an Outlook.com contact, but it does allow them, if they are also running Wi-Fi Sense, to log in to your Wi-Fi. The password must be stored centrally by Microsoft, and is copied to a device for it to work; Microsoft just tries to stop you looking at it. How successful that will be isn’t yet known.

Has been on Windows Phone for ages, yes, but most WP users don’t know any significant number of other WP users (because they’re so few). Not so with Windows. Microsoft says it only allows internet access and not LAN access – via port restrictions? That’s going to get hacked for sure.

Or could people maliciously spread their Wi-Fi details to try to sniff people’s viewing habits and details?

First things first, the Pebble looks better in real life than the pics you’ll have seen online. The black model is a little boring but will look neat under suit sleeves – for the record, we prefer the red and black Time.

Admittedly, the Time is plasticky, with a stainless steel bezel, but it retains the toy-like charm of the original Pebble while adding friendlier, more unisex curves. It’s very light at just 42.5g including the standard strap, 20% thinner at 9.5mm and the new slightly curved body helps to make it comfortable to wear on the wrist.

It’s amazing how many smartwatch manufacturers are satisfied with making devices that sit flat on top. The Time is the kind of smartwatch you can forget you’re wearing, until it vibrates.

I bought an original Pebble on Kickstarter. This? Looks like a toy compared to the Apple Watch. Not quite half the price, but really nothing like half as attractive.

This morning, Apple and GigSky teamed up to offer travelers the ability to instantly connect to a local data network in more than 90 countries and territories upon touchdown—no need to visit a kiosk, talk to a service agent, or really, do anything at all. Instead, iPads with AppleSIM cards will automatically offer the option to sign up for a data plans as soon as a local network is in reach. (The GigSky network includes most of Western Europe, from France and Germany to the Netherlands; Australia; South Africa; parts of the Middle East; and beyond.)

Because travelers are accessing onto local networks, rather that roaming from their domestic carrier, prices are impressively affordable as long as you’re traveling on the beaten path. Entry-level data plans begin at just $10, covering anywhere between 10MB (in Papua New Guinea) to 75 MB (in Italy); in countries with better access, the premium plans top out at 3GB for $50. By comparison, AT&T’s best deal currently charges $30 for 120 MB or $120 for 800 MB.

Latest iPads only have them preinstalled, although for older ones you can get Apple SIMs in its stores, apparently.

The long-standing quest to find a material that can conduct electricity without resistance at room temperature may have taken a decisive step forward. Scientists in Germany have observed the common molecule hydrogen sulfide superconducting at a record-breaking 203 kelvin (–70 ˚C) when subjected to very high pressures. The result confirms preliminary findings released by the researchers late last year, and is said to be corroborated by data from several other groups.

Some physicists urge caution, however. Ivan Schuller at the University of California in San Diego, says that the results “look promising” but are not yet watertight.

Pressure of 1.5 million atmospheres. Don’t hold your breath for this one.

The reaction to [BBC Online managing editor Neil] McIntosh’s post was predictable, inaccurate and devastating. The Times led with “BBC lists stories on abusers and rapists hidden under ‘right to be forgotten’”, gratuitously highlighting two stories.

The first was a 12-year-old story about a settlement between an alleged rape victim and the Catholic church, over incidents that occurred a half-century ago. The long-deceased abuser clearly couldn’t have filed the obscurity request with Google – leaving, rather less salaciously, the victim.

The second case concerned a nanny jailed for child abuse. Even a cursory Google search coupled with the basics of the Rehabilitation of Offenders Act would have told the journalist that an unspent conviction for such an offence clearly denied any reasonable claim to delisting. Caution raised, a bit more searching would have revealed the truth: that the conviction was overturned by the Court of Appeal. That former nanny has been exculpated under the law of the land – but not by Google and not, it seems, by the press either.

Other publications followed suit. Boing Boing drew attention to a rape story. Given it concerned a fairly recent conviction in 2012, clearly the sex offender has no entitlement to be delisted.

But what about his friend who was also named in the article because he happened to be in the house where the attack took place?

The “right to be forgotten” is so poorly understood, which frustrates the hell out of me. (See the comments under the article.) I wrote an explanation of what it is, and what it is not; please, before you discuss the topic with me (or anyone), read and absorb it. The topic is simple. It just takes a bit of thought.

A video circulating on Facebook and YouTube that was posted at the beginning of the last week of June shows that after tearing off a sticker that wraps around the battery of the Galaxy S4, the man in the video points to a small coil inside, saying, “This is the spy equipment.”

He remarked, “Samsung can record pictures on your smartphone and overhear your calls through the coil shaped like this antenna,” adding, “So, you’d better tear off the sticker that wraps the battery first and use the phone.”

In fact, this video attracted 12 million views on Facebook only four days after it was initially posted, and around 300,000 people reportedly shared the video.

However, local media outlets pointed out that this conspiratorial video originated from a misunderstanding about the Near Field Communication (NFC) antenna, a communication technology that makes it possible to transmit different kinds of wireless data to a distance of 10 cm.

Would be fun to know how weird ideas like this get started. I’ve seen a few incoming search queries on this to this blog, and wondered what was going on (it was because I wrote about Samsung obviously knowing whether people use replacement batteries).

Spot prices for 4Gb DDR3 chips already declined 17.55% in the second quarter, after falling 12.77% in the first quarter, the report quoted DRAMeXchange as saying.

Since 2015, DRAM spot prices have been dragged down by sluggish PC sales and a slowdown in smartphone demand, the report noted.

Hadn’t heard about this slowdown in smartphone demand anywhere else. China has, but elsewhere? Dram prices are often an early warning though.

Google says it is “appalled” that its new Photos app mistakenly labelled a black couple as being “gorillas”.

Its product automatically tags uploaded pictures using its own artificial intelligence software.
The error was brought to its attention by a New York-based software developer who was one of the people pictured in the photos involved.

Google was later criticised on social media because of the label’s racist connotations.
“This is 100% not OK,” acknowledged Google executive Yonatan Zunger after being contacted by Jacky Alcine via Twitter.

Machines can’t be racist, of course; but quite how Google is going to prevent this happening again is an open question. Neural network/deep learning like this isn’t something you can tweak directly. You can’t really peer inside it. Great when it’s drawing arcane pictures, not good when it’s mislabelling pictures.

Could this computer save your life? » CNN

“In one panel of scans that we looked at, when you look at the number of times that radiologists sent someone home with a clean bill of health, about 7% of the time that patient was ultimately found to have cancer,” said John Zedlewski, a data scientist with Enlitic, a medical technology company.

When Zedlewski used Enlitic’s algorithm against the same panel, there weren’t any mistakes.

How does it work? Enlitic’s technology uses machine learning — which some say is a version of artificial intelligence. It takes medical information from one patient — whether it’s a CT scan, an X-ray or details about, say, a tumor — and then converts it into a mathematical representation. It’s then added to a large pool of data and compared to other patients who have experienced similar issues.

Think of it as crowdsourcing your symptoms. And not just with one or two people, but millions. The more data the computer has, the smarter it gets, and the more accurate the diagnoses.

At least that’s the dream.

Seems to have a large base of data.