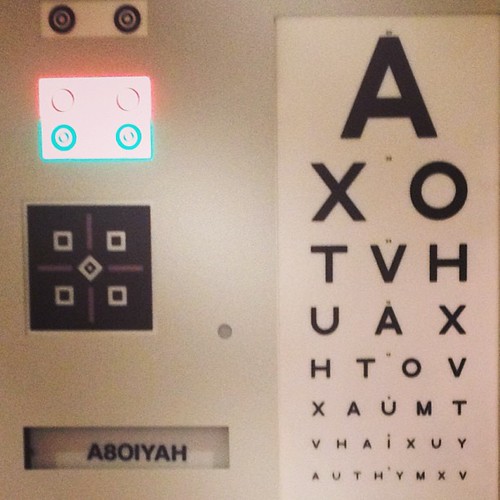 Eye testing for colour blindness. Photo by joeyanne on Flickr.

A morning selection of 6 links for you. Use them wisely. I’m charlesarthur on Twitter. Observations and links welcome.

Note: this is the first of two Start Up: posts today (it’s an experiment). The next will be published in six hours’ time (1300 GMT). Let me know what you think – one post or two?

Roku is still the leading brand with 29% of sales, but Google Chromecast (20%) has supplanted Apple TV (17%) in second place. New entrant Amazon Fire TV is in fourth place with 10%. Consumer content choices are also increasing, with Showtime and Sony planning to launch their own OTT video services to compete with Netflix and HBO.

“Nearly 50% of video content that US consumers watch on a TV set is non-linear, up from 38% in 2010, and it is already the majority for people 18-44,” said Barbara Kraus, Director, Research, Parks Associates. “The market is changing rapidly to account for these new digital media habits. Roku now offers a streaming stick, and Amazon’s Fire TV streaming stick leaves Apple as the only top player without a stick product in the streaming media device category.”

Note that these are sales, not installed base. But the desire to stream stuff is clearly growing very quickly.

Although selling for just over a month, the iPhone 6, with 33% market share, became the best-selling model among iOS devices for the three months ending in October 2014. The iPhone 5s was the second best-selling iPhone model with 26%, and the iPhone 5c was third with 18%. The iPhone 6 Plus captured 10% of iOS sales.

In the Android camp, the Galaxy S5 remained the best-selling model with 22% of sales while the Galaxy S4 continued to show its longevity, maintaining second place with a share of 12%.

Of the iPhone 6 and iPhone 6 Plus buyers, 85% were repeat iOS buyers and 9% churned from Android.

Also in the three months ending in October, smartphones sales reached 81% of overall phone sales and 59% of all phones in use in the US.

Paul Downey has been experimenting with the open data from the Land Registry about property sales, and used it to build a heatmap of sales from 1995 to 2004:

I’m cock-a-hoop how this image has turned out. The detail looks like bacteria on a petri-dish, but zoomed out it’s apparent not just where people live, but where people buy and sell houses the most, with the coast of East Anglia, Eastbourne and Cornwall darker than you’d expect. I can guess this may be due to turnover of retirement homes or holiday cottages but it’s plain to see there are many more interesting stories begging to be discovered from this simple map weighted with other open data from the likes of the ONS.

The frantic turnover in London and cities you’d expect, but the coasts are much more active than you’d otherwise expect.

[Takuro] Yoshida [CEO of Tokyo-based Logbar, which made the Ring] says that he never anticipated delays, despite only giving Ring a four-month window from Kickstarter to shipping. The campaign estimated delivery in July, but backers didn’t start receiving their pledges until October. The long wait would become a source of initial doubt, criticism, and refund requests before backers ever received the Ring itself – likely galvanizing negativity and setting Ring up for even harsher reviews than if it had shown up in mailboxes on time.

What was the Ring team doing on July first – the day shipping should have begun?

“We were still testing the hardware, hoping to ship in August” Yoshida says. “I have a lot of web and mobile app experience, so when there’s a bug I can fix it right away. But with hardware, it can take weeks to fix one problem.”

He admits that the final product wasn’t sent off for mass production until October 9.
In the meantime, Ring was receiving between 10 and 30 angry emails a day – and many more angry comments on its Kickstarter and Facebook pages.

“We had two people, from a team of only eight total members, replying to emails,” Yoshida explains. “With more than 5,000 backers, it was hard for us to respond to everyone, and we just couldn’t reply to the comments section because it kept growing and growing.”

Millions of PCs are aging, and those who have resisted Windows 8 will likely upgrade to computers with Windows 10. The initial reception to a test version of Windows 10 has been positive, as it resolves many usability issues affecting Windows 8.

There are about 600m PCs that are four years or older, and those systems are ripe for upgrades, said Renee James, president at Intel, at the Credit Suisse Technology Conference on Tuesday.

“When we see a healthy macroeconomic environment and an aging installed base we expect a new [OS] deployment. The [PCs] are fantastic and at new price points. That’s kind of a perfect storm, combined with a new OS, and the OS usually pushes the upgrade cycle,” James said.

Actually, the evidence doesn’t suggest that a new OS pushes an upgrade cycle. There’s a noticeable slowdown in purchasing ahead of each new Windows release; and then there’s a mild (over the past three releases) springback, but nothing that indicates that a new OS “pushes” upgrades – apart from the fact that consumers get the OS preinstalled.

Businesses, which is where many of those 600m PCs may be, are more likely to shift to Windows 7; or if they’re there, stick with it.

Content streamed to the STB [set-top box] incorporating the technology is enhanced on a frame-by-frame basis before transmission to the TV screen. Colour-blind viewers can then significantly better differentiate between red and green when watching, allowing them to see details that previously they could not. Importantly, [managing director Christopher] Cytera says, the enhancement has minimal impact on the quality of the picture seen by viewers not suffering from colour blindness.

The technology is said to use mathematical perception models to modify image colours, and is suitable for both still and moving images. The company suggests colour-blind viewers watching programs that normally contain a lot of red and green in their images – for instance sports and nature – will enjoy the biggest improvements in the “viewing experience.”

Now installed on an unnamed STB maker which is a “major, medium size, international player”. As 1 in 12 males and 1 in 200 females has colour blindness, you might be in need of this without realising it.