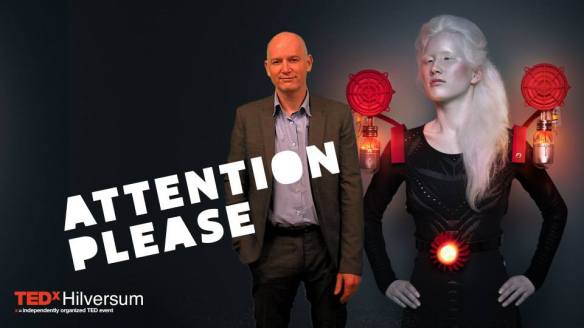 There was a “selfie booth”, appropriately enough.

I was invited to talk at the inaugural TEDx Hilversum – the Dutch city which is the country’s medialand, and whence the TV format ideas both for “Big Brother” and “The Voice” came.

The topic: “How to spot the next big thing”, building on a column I wrote for The Guardian’s Tech Monthly supplement back in October, about how the selfie was pretty much accidental.

What I wanted to explore and expand on in the talk was how these “next big things” in social interaction happen, and where you’d look to find the next one. (This isn’t a transcript – it’s the ideas I spoke on. The talk is about 15 minutes. I’ll put up the link when it’s available.)

Spotting the next big thing 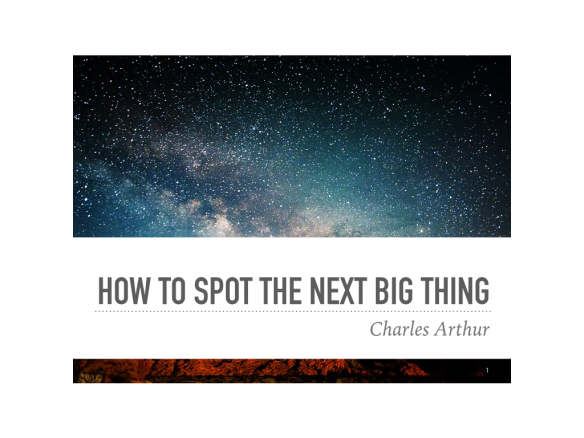 This isn’t, therefore, about which startup you should put your money into, though it might give you hints about what sort of things could generate money – if you’re ahead of the game. 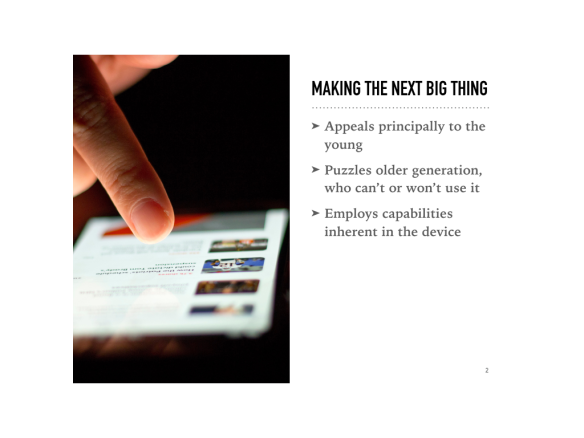 Three characteristics of “next big things”: they’re about kids and teens experimenting; adults find them a bit silly (or impossible or embarrassing); and they don’t require anything extra, because they’re immanent to the device. 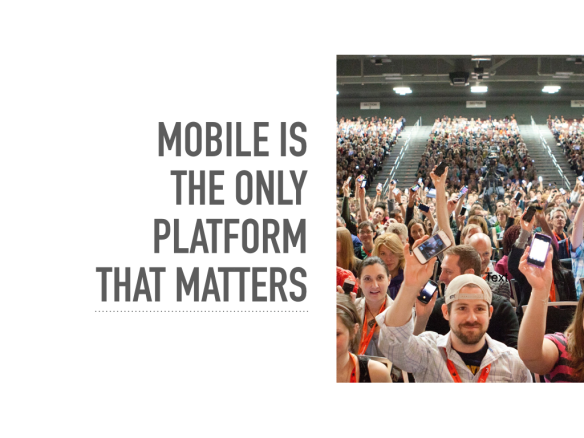 When we’re looking for the “next big thing”, the only place to bother looking is mobile. It’s the only platform that matters. People might say “what about the PC? There are 1.5 billion of them installed around the world.” Nope.

Think about this: what was the last important app that launched first on the desktop (not in the browser, because browsers work on mobile too)? There were two – Spotify and Dropbox, which both launched around the autumn of 2009. Everything big since then – Instagram, Snapchat, Whatsapp, Uber – has launched first and pretty much only on mobile, with essentially no functionality on the desktop.

By contrast, everyone has a mobile phone – there are more than 2 billion smartphones in use today. Pretty soon everyone will have a smartphone. Look at the people in the picture above: they’re holding up their mobile phones, not their laptops. 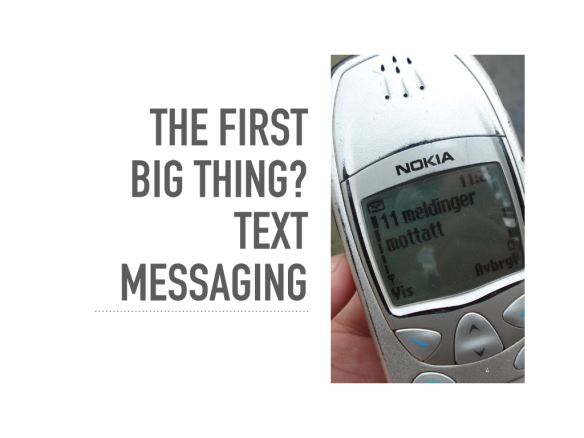 The first big thing was text messaging, aka SMS. Invented in 1986 and implemented in 1992, it didn’t take off at first – until the advent of pay-as-you-go (PAYG or pre-pay) phones, which meant that they were cheaper and adults didn’t have to commit to a contract for their kids; they’d just use what they needed. And those kids discovered SMS was cheap, and fast, and personal, and they loved it. The explosion in PAYG phones, in the UK at least, happened in 1999. 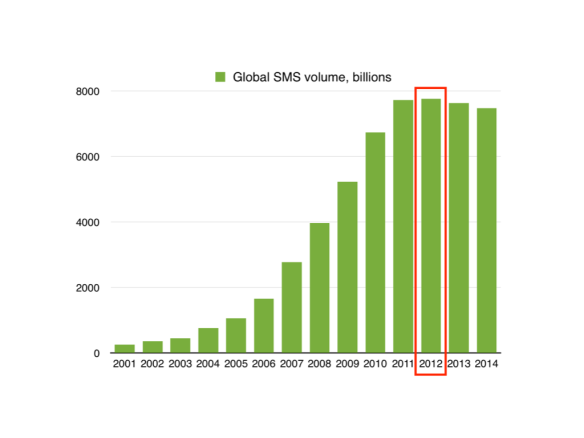 Here’s how SMS use grew globally. There’s almost exponential growth right up to 2011; and then it peaks in 2011-2012 and has fallen off since.

Why the falloff? Because the people who had been kids in 1999 were 12-13 years older. They’re grown up, having their own kids. Meanwhile the other kids growing up in the intervening years were moving on to their own things – OTT services using data, such as BBM, iMessage and Whatsapp. SMS was a golden goose for the carriers; now it’s being killed off. Whatsapp has only been available for five years – founded in 2009 and first released in 2010 – yet it’s now bigger than SMS in volume. 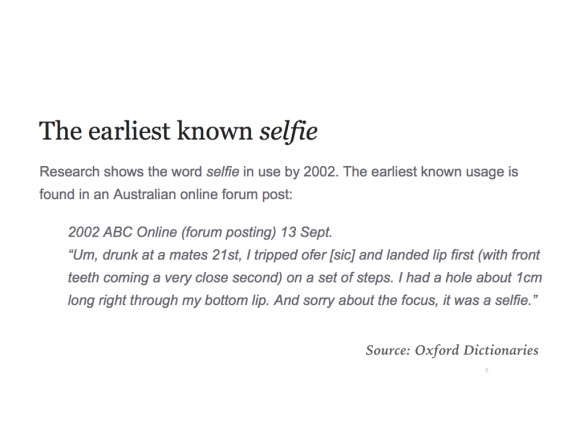 Sure, we know that there have been “selfies” for ages – painters in the Renaissance doing self-portraits, even Buzz Aldrin doing one in space during an Apollo mission in 1966. But we didn’t call it that, and “selfie” has a particular meaning in our context: pictures taken with our mobile phones, generally using the front-facing camera. 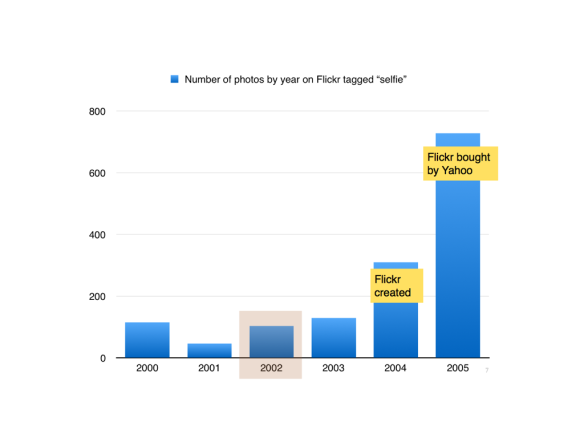 I thought this 2002 origin was interesting, so I dug out data from Flickr, looking for photos tagged “selfie” by year (1 January-31 December for the respective years). There’s that first 2002 use highlighted for reference, and clearly lots of millennium-dated photos that were backloaded; Flickr didn’t even exist until 2004. Yahoo bought it in 2005, and things started growing. 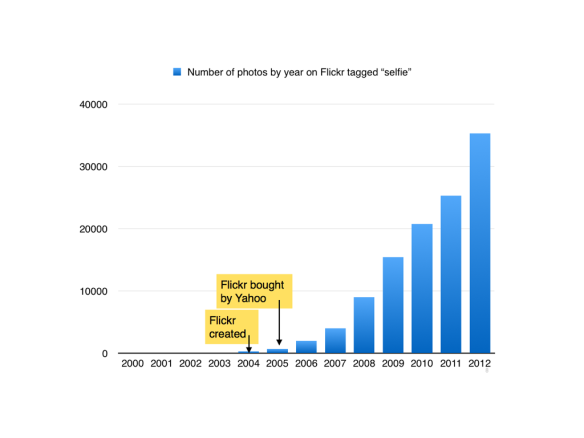 Fast forward to 2012, and the number is exploding. 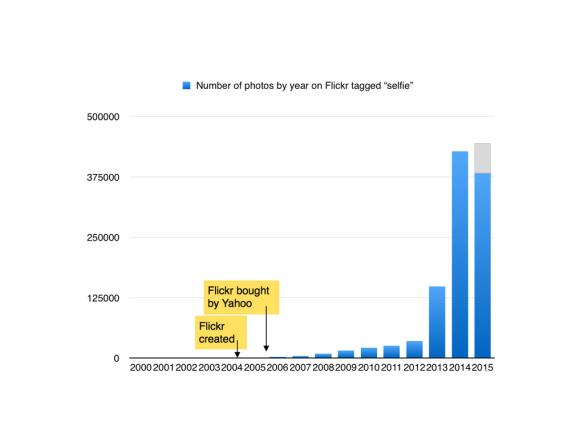 Fast forward again, and this really looks like exponential growth. Though the 2015 figure – with my estimate for the final total – looks like growth has slowed substantially. Why’s that? We’ll come to that in a moment. 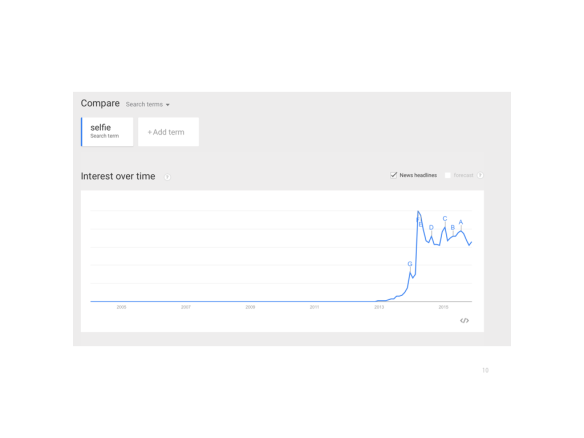 Just for contrast, here are the Google search trends for “selfie”. Pretty much nothing until 2013, when it takes off. (Think of the selfie at the Mandela funeral by Obama and the Danish prime minister in December 2013, which is the first peak there, and the Oscars selfie by Ellen DeGeneres – actually taken by Bradley Cooper in March 2014 – which marks the high point.) But it looks as though interest in the selfie is dying, doesn’t it? 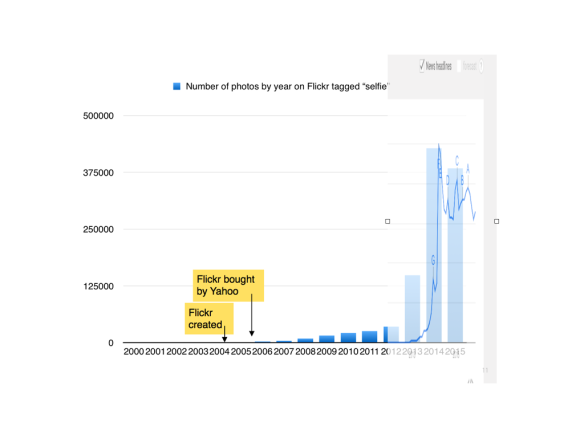 If you superimpose the Google Trends data and the Flickr data, their growth looks pretty similar. So is the selfie dying off?

What’s more probably happening here is that a new generation of kids isn’t using Flickr – they’re on Instagram, where millions of selfies are posted every day. I couldn’t extract the data from Instagram, but you can be sure it’s huge. The selfie has probably got a few years left in it yet. But that generational shift is interesting, because it’s just what we saw with SMS before. 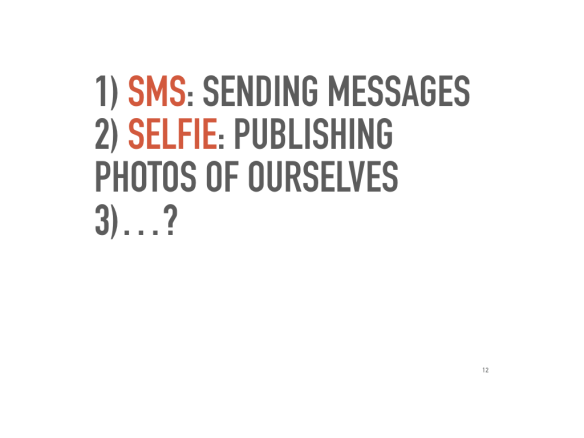 So there are two examples so far of “next big things”. What might be next?

Well, the smartphone is the most personal device ever. It knows who we know, when they call, when we ignore them, what we like and what we watch, what we read, how we communicate, where we go.

Why wouldn’t it be used for… sex? 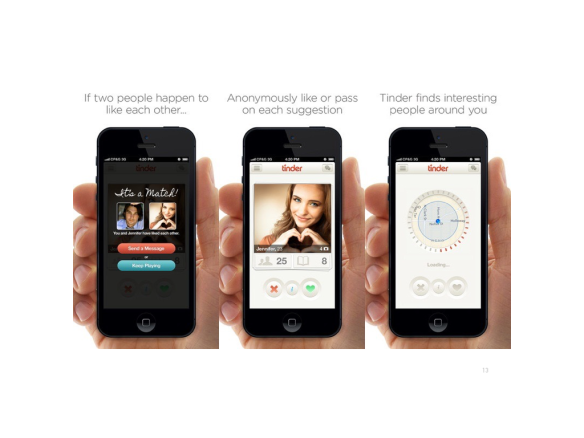 Turns out, it already is. Apps like Tinder fit all of our three criteria: it’s used by the young, it puzzles the old (“why would you judge someone based on so little information?”), and it uses qualities inherent to the device – selfies for profiles, real-time data updates, touch interaction, geolocation.

Tinder alone sees billions of “swipes” on profiles every day, and millions of meetups, and there are surely going to be Tinder babies – people created on the basis of algorithms on smartphones. Is that weird, or just natural? Your view might depend on your age. 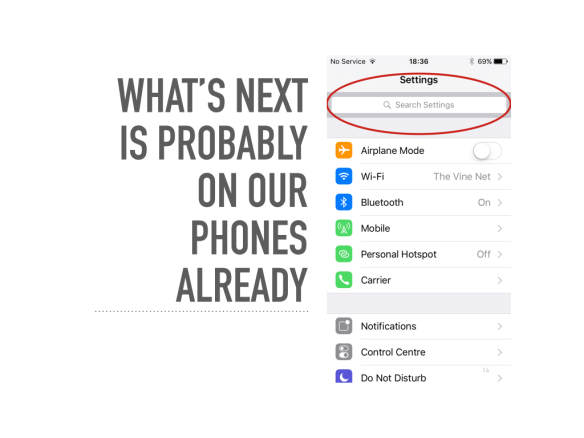 After SMS, selfies, sex, what will the next big thing look like? There are some clues. The biggest one is that it’s almost surely already in the phone, just as SMS was a capability in 1992, before PAYG phones, and selfies were possible from the first phones with a front-facing camera in 2003.

So here are three elements that I think might feed into the next big thing. 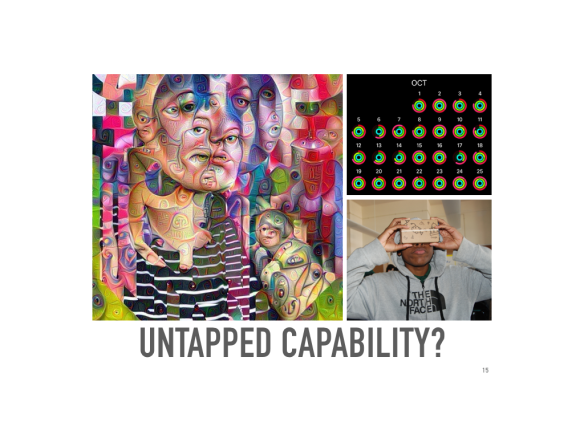 Artificial intelligence: The first, and biggest, is artificial intelligence or “machine learning”. This is a picture of someone as visualised through Google’s “Deep Dream” neural network. We don’t understand it because the machine refracts its view. But to the machine, it makes a sort of sense. There is a growing amount of AI/ML/NN technology in all our smartphones: Apple’s Siri, Google Now, Microsoft’s Cortana. You can also get “assistants” such as Amy (which will set up meetings) and “Charlie” (which will give you a social media profile of people you’re going to meet).

This AI tells us if we should leave early for meetings, who’s calling us (perhaps based only on phone numbers found in emails, not our contacts), what apps we look at, what news we look at, how we interact with the world through our phone. In the next few years, we should expect that it will become far more powerful, even without a connection to the cloud; if you think that sounds fanciful, just go back five years, to 2010, and none of the phones we have had those sorts of capabilities. Siri hadn’t been introduced. Think five years ahead, and that’s the sort of gap between now and then that we’re going to see.

Health/fitness: if my AI knows what I’ve been doing, shouldn’t it also know how well I’m doing? Connected to devices such as a watch or fitness band, there’s far more data about ourselves becoming available. Does that feed into the Next Big Thing by showing that you’re *really* fit in your online dating profile? Does your AI tell you before you’re going to be ill?

Virtual reality: This is Google Cardboard, a super-low-cost implementation of virtual reality: you cut and paste it together from a kit, and then slot your smartphone into the gap, and bingo. It’s on the tipping point, I think; ready to take off. And when that happens, everything becomes possible. What if the Tinder profile of the future lets you walk around the person you’re interested in dating, in 3D? What if you meet without physically being in the same place?

I don’t know what the Next Big Thing actually is. But consider a couple of points. SMS was invented over a decade before it actually took off. The word “selfie” was coined for the activity back in 2002 – yet it only exploded into public consciousness a decade later.

Perhaps the word for the next big thing has already been coined; it’s been tossed around carelessly on an online forum where someone is describing something they did or something that happened. And in years to come we’ll look back and say ah, it was obvious.

That’s because spotting the next big thing is a puzzle, not a mystery. There’s a difference between the two. A mystery is – well, think of a murder mystery. Only one person knows who did it, and they’re not saying. Mysteries are meant to remain unsolved.

But to understand a puzzle, think of a jigsaw puzzle. The pieces are all there, in plain view; the only problem is putting them together correctly.

For entrepreneurs, there is good news: if you’re alert, you can cash in. SMS made huge profits for carriers. Selfie sticks meanwhile have been nice business for some factories in Shenzhen. (They’ve even led to museums changing rules; that’s success, when you change society, even a little.)

Just as puzzles just need the pieces put together correctly, it’s very likely that everything necessary for the next big thing is right there, just waiting for someone to put it together. The people who do that probably won’t be the adults; it’ll be the kids and teens messing around. And adults will probably think it’s stupid. But that’s how it goes.

Still, we won’t have to look far to find it. It’ll be right there in the palm of our hands – in our phones.