Saturn’s rings. What if they were around Earth instead? We have pictures. Photo by alpoma on Flickr.

Lots of other people have already signed up to receive each day’s Start Up post by email. Unless that’s where you’re reading it. Remember how you clicked a confirmation link to avoid spam?

A selection of 10 links for you. Ooh look, December already (where I am, anyway). I’m charlesarthur on Twitter. Observations and links welcome.

Ethan Kaplan has a fine (and growing) list, of which this is an example:

There are two forms of intelligence that will help you find music: machine and human. Music discovery companies target the type of music listener who’s heuristics will always yield better results from the machine. They bring enough probabilism to bear to ensure good outcomes from collaborative filtering.

This is not most people. Most people won’t have inputs such as “post punk from Boston between 1980 and 1984 who toured along side but not with R.E.M.”

Most people have inputs like “something inoffensive that won’t bother me and that my kids won’t fight about.” For most people the music discovery engine that matters still has an actual name. It always did. It may be Keith McPhee [music supervisor on the Tonight Show] or Kevin Weatherly [SVP of programming at CBS] or Bob Pittman [CEO of iHeartMedia, formerly ClearChannel].

It isn’t and never will be the name of that latest startup.

Sonos will let people access Apple Music’s For You, My Music, New, and Radio — basically everything but “Connect,” a social feature intended to link artists with their fans. The focus is curated streaming, which Sonos co-founder and CEO John MacFarlane says drives most of the music listening that occurs on Sonos speakers these days.

“Well over 90% of the music people listen to on Sonos speakers is from streaming services,” MacFarlane told BuzzFeed News. “We think Apple Music is going to be a catalyst that will raise that percentage even higher. What we’ve found is that as Sonos owners discover streaming services like Apple Music they use the local collections they have on their home computers and cell phones less and less.”

For Sonos, which has long offered a robust menu of streaming music services that includes everything from Spotify to Tidal, the addition of Apple Music seems a no-brainer, particularly since its Beats Music predecessor had been available on Sonos since January of 2014 until it was shut down on November 30. So why wait? Why did Apple not offer Apple Music right out of the gate? “It’s important to get the integration right the first time out,” [Apple software and services veep Eddy] Cue told BuzzFeed News. “Apple has a high bar for this stuff; So does Sonos. Apple Music isn’t even six months old yet, so this really did not take much time at all.”

Here’s the signup for the beta. Personally, this is the Christmas present I really want.
link to this extract

Below are a range of deep neural network models that are free, even for commercial use in your applications. These models have been trained over images for a range of domains. Thus they should accomodate a range of applications, from fashion item recognition to sports and gender classification.

This page lists a growing list of available models, along with information on how to use them and how they were built.

If you have a business of any appreciable size which works on data, I’d suggest you should be investigating what a neural network could do. Even the simple result on the page is remarkable.
link to this extract

Ben Bajarin on the results from a Wrist.ly survey of people who gave up using their Watch:

Here are the top five reasons this group gave for giving up on the Apple Watch. 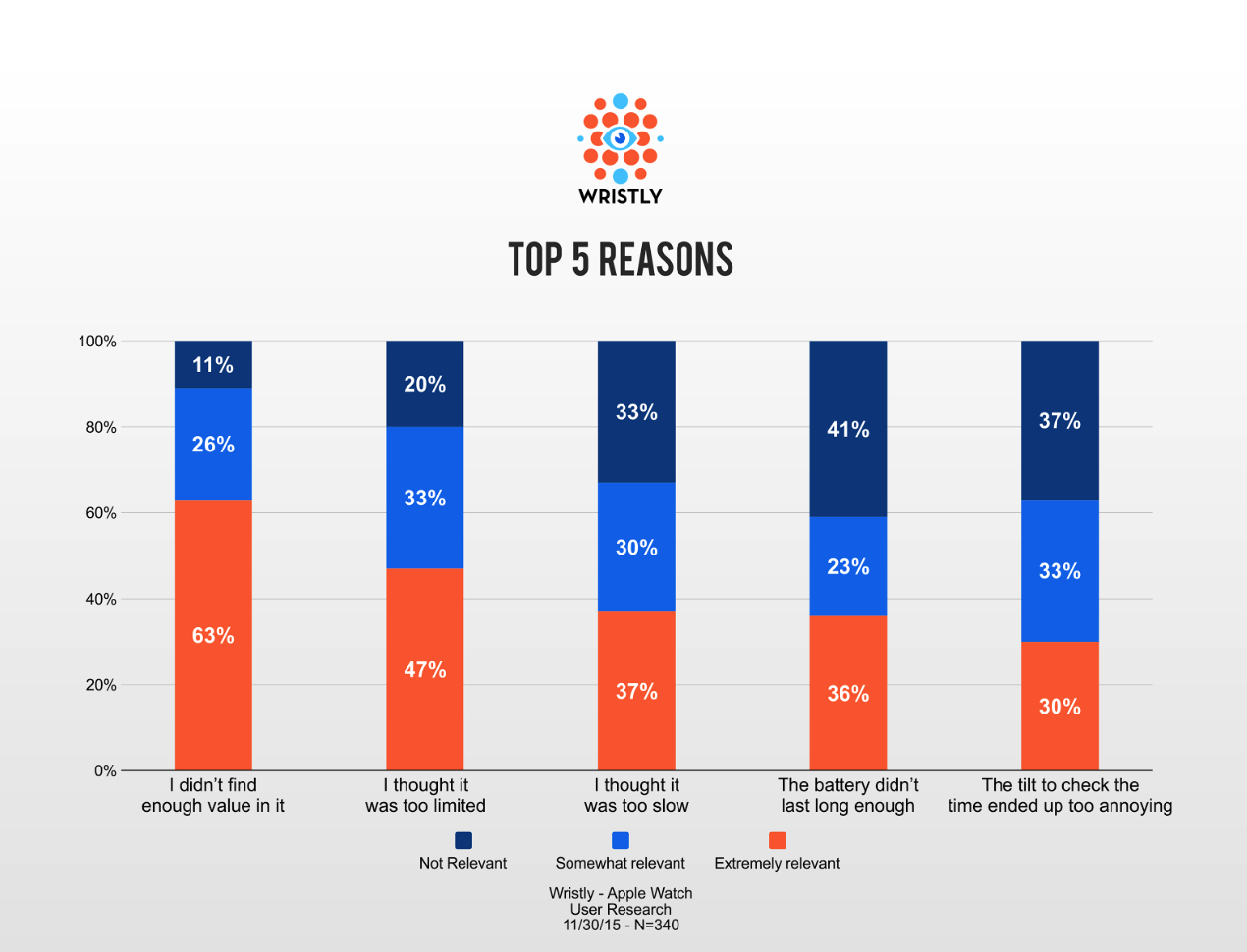 The most insightful part of this particular question was the follow on, fill in the blank area where 300 people who took the survey wrote a comment about the product. I read through them all and a number of things stood out. The biggest theme in the critiques was about performance. Many thought the Apple Watch was too slow, particularly around data retrieval and third party apps. The other was about battery. Many commented on their desire to have the watch face be visible at all times and not have to charge daily. Another interesting thread in the comments was the high number of people who said they would have liked it more if it was more independent from the iPhone. This is a similar thread to comments from our larger Wristly panel of satisfied owners. Another common thread I saw from this group was the price. Many who commented suggested the price was too high and we know from this panel 65% of those who responded bought a Sport. This indicates that even $349 felt too expensive for the value for this group.

What would Earth’s skies look like with Saturn’s rings? » The Planetary Society

Illustrator and author Ron Miller specializes in, among other things, incredible visualizations of other worlds. He has rendered the surface of Titan, peered into black holes for Discover magazine, and designed a Pluto stamp that is currently hurtling toward the far reaches of our solar system aboard the New Horizons spacecraft.

Now, Miller brings his visualizations back to Earth for a series exploring what our skies would look like with Saturn’s majestic rings. Miller strived to make the images scientifically accurate, adding nice touches like orange-pink shadows resulting from sunlight passing through the Earth’s atmosphere. He also shows the rings from a variety of latitudes and landscapes, from the U.S. Capitol building to Mayan ruins in Guatemala.

We’ll start with Washington, D.C. and work our way southward.

These are very beautiful, and thought-provoking, images. Wish that a film like Interstellar had used something like them. (Is there a film of Ringworld in production? If not, why not?)
link to this extract

Six Features That Allow Your PC To Do More Than Your Phone » About.com

Hilarious advertorial from Intel. See what you make of the six things, which are

Any of these alone could raise a laugh, but my favourite may be “you don’t have to worry about paying for data”. Intel magically makes data appear? Love it. Now let’s move on to our next entry…
link to this extract

Can the MacBook Pro replace your iPad? » Fraser Speirs

Yes, you did read that headline correctly:

Despite their far greater size, and consequently weight, there is no MacBook Pro model that gets better battery life than the iPad Pro. You have to wonder about the efficiency of the Intel platform. The MacBook Pro line also requires device-specific chargers. Although most recent models use the MagSafe 2 connector, each model comes with its own rating of charger. Compared to the iPad Pro’s use of the widely-available Lightning connector and its ability to charge from small battery packs, this significantly reduces your chances of being able to just borrow a charger for a quick top-up when out and about. Not to mention the fact that none of those increasingly-common public charging lockers support MagSafe 2.

While we are on the subject, let’s talk about ports. The designers of the MacBook Pro seem to have gone port-crazy. The MacBook Pro takes up a lot of space on the sides of the device for ports that most people will likely not use very often: SD Card readers, HDMI connectors and even dual thunderbolt ports. Having multiple ports that do the same thing is probably confusing for many users, which is likely why you see newer designs like the 2015 MacBook moving closer to the iPad approach to connectivity with a single port for power and peripherals.

There’s a point at which trolling (and satire) are indistinguishable from real life. This is one of those times.
link to this extract

The Pakistan Telecommunication Authority notified the country’s mobile phone operators in July that BlackBerry’s BES servers would no longer be allowed to operate for security reasons, Marty Beard, chief operating officer at BlackBerry, said in a blog post on Monday. “The truth is that the Pakistani government wanted the ability to monitor all BES traffic.”

The regulator is still in talks with BlackBerry and “hopefully it’ll be sorted out,” Pakistan Telecommunication Authority Chairman S. Ismail Shah said by phone. The discussions will go on for a month and could be extended, he said.

Going to leave 5,000 BES customers there high and dry. What do Apple and Google do there, though?
link to this extract

Lots of data, such as:

• Smartphone shoppers dominate: smartphones remained the Black Friday shopper’s device of choice. Smartphones accounted for 44.7% of all online traffic, 3.5x that of tablets at 12.5%. Smartphones surpassed tablets in sales, driving 20.6% of online sales (up nearly 75% over 2014) versus tablets at 15.5%.

Of course tablets aren’t used for “real work”. Also some data about iOS/Android split in spending terms – which goes as you might expect.
link to this extract

Lost in music: the world of obsessive audiophilia » The Guardian

although I have been immersed in this world for 25 years, I still don’t quite know who buys the stuff. Hi-fi stores are often in modest, ordinary towns and suburbs. Who is it in Crewe that is spending the price of a very nice new car on speaker wires?

Some of the enthusiasts, of course, are the rich and famous. Douglas Adams had a system in his Islington home that reputedly cost £25,000. The crime writer Ian Rankin is an aficionado, having been a hi-fi reviewer in the 1980s. Celebrity physicist Brian Cox reportedly loves “high end” hi-fi. And the internet says Frank Zappa was big on it, along with Clint Eastwood and Hugh Laurie – and that Russian prime minister Dmitry Medvedev has a system by Naim, a Salisbury manufacturer.

In a proper hi-fi dealer, Richer Sounds included, you can buy a good system of parts from various manufacturers for as little as £1,000. The bits won’t match, though – heaven forbid they should look nice. None of it will have what hi-fi men call WAF – Wife Acceptance Factor.

Yep this is a thing. Non-ironic. I believe.

Women broadly have too much sense to be audiophiles…

…my wife believes hi-fi is the male version of wrinkle cream – dubious claims, expensive prices, results only apparent to the buyer.

I think his wife is right on the money.
link to this extract