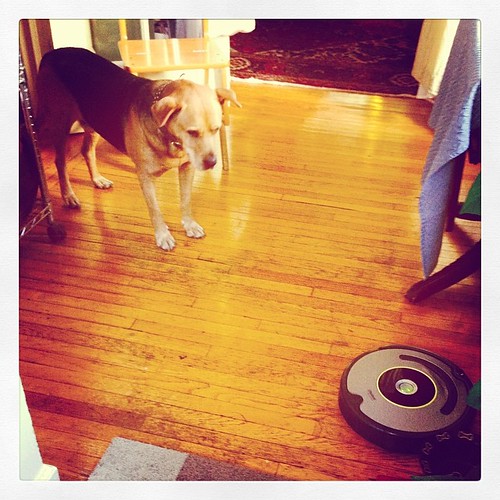 A selection of 8 links for you. Use them wisely. I’m @charlesarthur on Twitter. Send links, comments, etc there, or drop them at the end of the article.

The Mobile and Communications Group, as it’s known, will be broken up. The teams that develop mobile processors will join the new client group, while the remainder, which builds modems, will be part of a new wireless R&D group.

Herman Eul, who leads the mobile group today, will oversee the move to the new structure until at least the end of the first quarter, with a new role for him to be announced after that, Mulloy said.

The reorganization comes as Intel battles to improve its position in the market for smartphones and tablets, which is dominated by chips based on designs from Arm Holdings, a UK competitor.

The Mobile and Communications Group reported an operating loss of more than US$1bn in the third quarter, in part because it’s been making payments to tablet makers to encourage them to use its chips. As a result of those and other efforts, Intel has said it aims to get its processors into 40m new tablets this year.

Samsung Electronics said it would reduce the number of smartphone models it offers next year, part of a move to cut costs to combat declining profit.

The South Korean technology major said it would cut the number of models by about 25% to 30%, Robert Yi, head of investor relations, said during a presentation in New York. His remarks were confirmed by a company spokesman Tuesday.

Samsung didn’t disclose the exact number of models that would be affected by the reduction.

Yeah, so cost-cutting. But now – with thanks to Stefan Constantine – let’s revisit Nokia in April 2011:

An unnamed Nokia Executive, in an interview with the Hindustan Times, has said: “We will be launching 40 models in 2011 of which at least 30% would be smartphones.” This news isn’t exactly making us bust out the champagne because that’s right around how many models Nokia has been releasing every year for the past five years. The Finnish firm has consistently told us that they’re going to take a “more wood behind fewer arrows” approach, meaning that they’ll come out with less new models, but said models would be further refined, but we’ve yet to actually see that materialize.

“Fewer models” seems easy to say, but when your business has been about “lots of models” is hard to do.

Remember when Google’s servers were broken into by Chinese hackers at the end of 2009? Shane Harris points out that something more happened afterwards:

On the day that Google’s lawyer [David Drummond] wrote the blog post [condemning China], the NSA’s general counsel began drafting a “cooperative research and development agreement,” a legal pact that was originally devised under a 1980 law to speed up the commercial development of new technologies that are of mutual interest to companies and the government. The agreement’s purpose is to build something — a device or a technique, for instance. The participating company isn’t paid, but it can rely on the government to front the research and development costs, and it can use government personnel and facilities for the research. Each side gets to keep the products of the collaboration private until they choose to disclose them. In the end, the company has the exclusive patent rights to build whatever was designed, and the government can use any information that was generated during the collaboration.

It’s not clear what the NSA and Google built after the China hack. But a spokeswoman at the agency gave hints at the time the agreement was written. “As a general matter, as part of its information-assurance mission, NSA works with a broad range of commercial partners and research associates to ensure the availability of secure tailored solutions for Department of Defense and national security systems customers,” she said. It was the phrase “tailored solutions” that was so intriguing. That implied something custom built for the agency, so that it could perform its intelligence-gathering mission.

According to officials who were privy to the details of Google’s arrangements with the NSA, the company agreed to provide information about traffic on its networks in exchange for intelligence from the NSA about what it knew of foreign hackers. It was a quid pro quo, information for information.

Google’s Sergey Brin is just one of hundreds of CEOs who have been brought into the NSA’s circle of secrecy. Starting in 2008, the agency began offering executives temporary security clearances, some good for only one day, so they could sit in on classified threat briefings.

Large venue live sports production promises to be a huge market for 4K production equipment in what could be the very near future. And while there are 4K cameras aplenty, switchers that can be upgraded and a host of other 4K equipment ready to go, there’s no long focal-range, highly telephoto 4K lenses to mate with the Super 35 single-sensor cameras.

The motto of high quality lens makers might as well be: “Physics will fight you.”

“When we talk about a 100×1 zoom, and the 35mm sensor, 4K, we’re talking about something we don’t think is very practical today,” said Larry Thorpe, national marketing executive at Canon USA Inc. “Once you jump from 2/3-inch imagers up to something like a Super 35, you set a baseline in element sizes, so the lens by definition is going to be larger.”

Long story short, it’s going to be expensive, or perhaps just not feasible.

“Apple has designated Samsung as the primary supplier of its next A-series chips powering iOS devices from 2016 as the alliance with GlobalFoundries (GF) enabled Samsung to cut off capacity risk,” a source familiar with the deal said.

The value of the deal is said to be worth “billions of dollars,” according to the sources.

Production of the APs will start early next year at Samsung’s local factory in Giheung, Gyeonggi Province, and the volume will grow as Samsung plans to use its facilities in Austin, Texas and the GF-owned factory in New York for increased output, another source said.

That will be about 80% of the application processors for iOS devices. Good for Samsung, though doesn’t really get its flywheel (make chips and screens for more profitable devices such as its own smartphones) turning.

Nokia partners with Foxconn to take on Apple with tablet device >> FT.com

Ramzi Haidamus, Nokia’s technology chief, said the N1 tablet would be as good as Apple’s iPad mini but cost less. He added that it was just the first consumer product that would be designed and labelled as Nokia devices.

“It’s the first of many coming – more SKUs [items for sale], more sizes, more features,” he told the Financial Times in his first interview since becoming head of Nokia’s technology division three months ago. “We will go beyond tablets for sure.”

Nokia is prohibited from making smartphones until 2016 under the terms of the sale of its handset business to Microsoft. But Mr Haidamus said that “we will be looking at going into the cell phone licensing business post-Microsoft rights”.

The N1 is the first Nokia-branded consumer device brought to market following the sale of the Lumia and Asha businesses to Microsoft. Nokia did not manufacture tablets.
The company said it would be the first tablet operated by a “predictive engine” that gradually learnt a user’s habits and created customised shortcuts to commonly used apps, contacts and web content.

Foxconn also makes lots of Apple devices, and is partnering with BlackBerry too. Big ambitions. Can’t see Nokia’s tablet making much impression on the Chinese market though.

Native apps are part of the web >> Daring Fireball

John Gruber wrote the complete rejoinder (with some pointed notes about paywalls and free sites) to Christopher Mims’s “web is dying” piece from the previous roundup:

Users love apps, developers love apps — the only people who don’t love apps are pundits who don’t understand that apps aren’t really in opposition to the open Internet. They’re just superior clients to open Internet services. Instagram didn’t even have a web interface for years, but native app clients for iOS and Android didn’t lock Instagram into anything. Their back-end is just as open as it would have been if they had only had a web browser client interface. They just wouldn’t have gotten popular.

I spoke about this four years ago at O’Reilly’s Web 2.0 conference, in a talk titled “Apple and the Open Web: A Love Story”. The gist of it being that native iOS apps (and native apps for Android, Mac OS X, Windows, and everything else) aren’t in opposition to the “web”. They live on top of the web. A new layer. They are alternatives to websites that run in web browsers. They’re just better clients.

Clear thinking is easy to recognise when you see it. This is an example. Although the debate goes on: Tim Bray says on Twitter: “What @gruber says is correct, but native apps have gatekeepers, browser apps don’t. Call me old-fashioned, but that really bothers me. It doesn’t trump all the other issues, but it’s a big deal.” (The discussion continued on Twitter.)

When dogs and robots collide, somebody needs a talking to >> WSJ

This dates from 2008, but is still relevant:

To keep the peace at home, Keith Hearn had to scold his new robotic vacuum cleaner.

The trouble started when Mr. Hearn first turned on his Roomba automatic cleaner. When the device started scooting around the floor, Mr. Hearn’s dog, Argos, attacked it.

Seeking help, Mr. Hearn found an online forum dedicated to the hundred-dollar Roomba buzzing with similar stories of pet assailants. Owners were offering advice. Among the most popular: chastise the vacuum in front of the dog.

And so, with Argos looking on, Mr. Hearn shook his finger at his gadget and sternly called it “a bad Roomba.” Argos appeared to be mollified. “After that, he never tried nipping at it again,” says Mr. Hearn, a software engineer in San Carlos, Calif.

We’re only just beginning to get self-organising devices in the home, but where will pets fit into the internet of things? They have their own social structures that they believe exist.