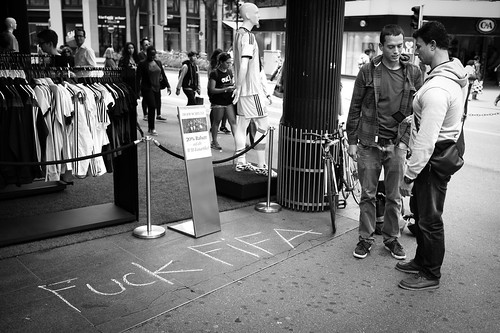 Strong feelings, and not about the video game. Photo by gato gato gato on Flickr.

Have to admit I haven’t read it (found it late) but it’s always essential reading. Download and peruse.

Apple began to lay the groundwork for Proactive with its acquisition of a personal assistant app called Cue in 2013, seeking to relevantly broaden iOS’s Spotlight and Safari search results. iOS 8’s ability to display Wikipedia Search results within Spotlight was the first taste of the Proactive initiative, and was partially designed to reduce iOS’s search reliance on Google. Sources say that Apple’s internal iOS usage metrics indicate that Google clicks have indeed fallen since iOS 8’s release last fall. Now Apple wants to take Proactive to the next level, and it may do so with iOS 9’s introduction at the annual Worldwide Developers Conference on June 8. While Apple has positioned Siri as an “intelligent personal assistant” since the fall 2011 launch of the iPhone 4S, Proactive will go much further to integrate with your data. To begin with, Proactive will become a new layer within the iOS operating system, replacing the pulldown Spotlight menu currently found on the iOS Home screen.

But he says there’s also disagreement about whether to launch this in iOS 9, which was sorta going to be the “Slow down, Snow Leopard” release. (Also, “augmented reality” always sounds cool and then disappoints. I’ve tried it. It ain’t all that.) I’d love to see the metrics around Gurman’s stories compared to those for Re/Code. I think he might be ahead in pure readership. But of course he doesn’t have a giant conference attached.

AppleInsider reader Kaitlyn on Tuesday discovered that receiving the Unicode characters seen in the screenshot above through Apple’s iOS Messages app triggers iPhone restarts, lockouts from Messages, Springboard crashes and more. A thread on Reddit narrowed down the system crash and reboot errors to iOS Unicode handling. More specifically, the Unicode string in question is part of a much longer block of text that cannot be fully rendered in Notifications.

If you’re thinking this sounds retro, that’s because it is: same sorta bug (different string) did the same thing back in August 2013. Wonder how long the fix will take. Also: Apple Watch apparently not susceptible, which is super-puzzling.

Matt Buchanan points out that if you pull the threads of both companies for long enough, you end up – from both – at Comcast, where its venture arm is trying to sell a company to the main arm. Trebles all round, or something. Also, take a look at the tags on the story. (Via Charles Knight.)

Now, I don’t usually care about football (soccer to you Americans), but the evident corruption in FIFA (the “world governing body for football”) has been evident for years. Now, finally, something is happening – but not on just one, but two fronts:

Chuck is now raising money on his far-right website GotNews.com to have himself reinstated following this “censorship”. But his previous threats of legal action have never led to anything, with a website dedicated to the many times he has planned to sue for libel.

The list of things he has got egregiously wrong – on purpose? – is astonishing. But his whole schtick is about outrage and extremism. It’s more the attention paid to such people that’s the problem. When they’re just shouting to themselves, it means nothing.

Compare to the estimated 7m Chromebooks: these are both still niche markets.

The Urbane falls behind in its approach to the fundamental smartwatch problem: When technology is attached to our bodies, there’s a thin line between help and nuisance. Android Wear is the annoying little brother of operating systems. It really wants your attention, and to keep you swipe-swipe-swiping away on its little screen. A smartwatch’s purpose is to keep you plugged in so you don’t have to be glued to your phone. Since I started wearing an Apple Watch two months ago, I check my phone roughly 25% less, according to Moment, an app that monitors my habits. Ideally, a smartwatch should give you just enough information to keep your smartphone anxiety in check, but not so much that you’re tempted to keep looking at your wrist. The Urbane’s default settings do the opposite. When I just want to check the time, the Urbane often teases me with a notification “card” on the bottom of its screen. You’ve got four new emails! It’s 68 degrees today! You can quickly swipe it away, but after that one’s gone, there’s usually another card waiting.

Lots of room for improvement – but it’s still very early days. (Hadn’t heard of Moment before. “TRACK HOW MUCH YOU AND YOUR FAMILY USE YOUR PHONE”. Are you brave enough? Um, and it has a Watch version.)

Zero tech in this collection of “how hard life is because we don’t have X tech that the informercial will sell you”. Lots of solutions looking for problems – happily, we don’t see the solutions, just guess at them (and, often, the problems). The most impressive, in my view, is the woman in the second GIF who juggles the bottle. That’s really hard to do badly well.