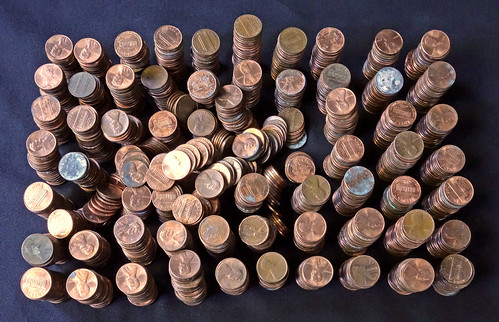 A game with these will give you an insight into production processes. Photo by judy_and_ed on Flickr.

Why is your team falling behind? Ask ‘The Penny Game’ » Atomicobject

The book Velocity describes an enlightening simulation, a model of a simple manufacturing line. The game uses pennies and dice to represent pieces of work flowing through stations in a factory. It may be simple, but the penny game can improve our understanding of how software teams work, how the interaction of variable processes affect the system as as whole.

In the penny game, pennies come in at one end of the line, are processed by each station, then exit at the other end. This would be rather mundane but for one complication: each station does not always process the same number of pennies.

In the simulation, rolled dice indicate how many pennies each station is allowed to move.

This is fascinating – and gives you real insight into the problems that have to be overcome in manufacturing to tight deadlines. Imagine now if you were processing millions of “pennies”, except they were phones.
link to this extract

More than 1,000 of Google’s 60,000 employees monitor and remove ads, an important task because the company gets about 90% of its revenue from advertising. It’s also been hit financially for not adequately monitoring ads. In 2011, the company agreed to pay $500m to settle allegations by the U.S. Department of Justice that ads for Canadian online pharmacies contributed to the illegal importation of prescription drugs. In the settlement, Google acknowledged it acted “improperly.”

Google blocked more than 12.5m ads in 2015 for drugs that were unapproved or that made misleading claims, up from 9.6m a year earlier.

Ads making misleading weight-loss claims were a big source of user complaints last year, prompting Google to suspend more than 30,000 websites from its ad systems. It declined to give a comparable number for 2014.

Rob Leathern has the growth figure for ad disabling: it’s growing by 50% annually, but still a long way short of catching them all.
link to this extract

How I stumbled upon thousands of Facebook passwords » Medium

“Rukshan”, a Colombo-based medical undergrad and hacker, received a Facebook phishing email and twiddled around with the phishing page:

after modifying the url I checked the folder which contained the php script that handles the post requests and I knew at that moment I hit the jackpot.

There was no index.html file to make sure no one else see the files in that directory or any .htaccess modification, well like I said phishing people are too bored to do all these tech stuff anyway, they’d rather get the passwords and go away.

So I opened the password.html file and I was greeted to the sight of hundreds of Facebook passwords, and by looking at the credentials one there was a pattern:

Neat idea; neater still would be to wipe the files. But that would be one sizeable hack further (and probably illegal).
link to this extract

Why don’t you have an Android version? (Or why we develop for iOS first) » Impossible Ventures

But that’s not just fake studies either, in our experience with Paleo (io) – a top 20 app in iTunes and ranked even higher in Google Play – we make about 3x the sales on our iTunes listing as we do on Google Play (even though we have a higher ranking in Google Play than iTunes).

Which brings me to the next point: apps are not free to make.

As an app developer, you have to spend time & money on this concept that you have in your head to bring it to reality. The  MVP on an app can cost anywhere between $2k and $20k to build and launch. It might not seem like much if you spend all your time raising VC money and have a $1M+ in the bank, but it can add up if you’re bootstrapping.

In fact, with every dollar you spend, there’s a very real cost (along with another equally as real, opportunity cost).

Of course the argument is completely different in Asia, where it’s generally Android-first (except in Japan, and who knows in China?).
link to this extract

The tennis world was sent reeling when BuzzFeed News and the BBC jointly published The Tennis Racket, which revealed “evidence of widespread match-fixing by players at the upper level of world tennis”. But BuzzFeed refused to publish the names of those players.

We dove into the data and found the names ourselves.

Unless you follow tennis really closely you won’t have heard of any of the names but one, and I do wonder if that one is thrown up by some weird quirk of the analysis. Seems robust, though. I think this might dissuade players – and administrators – from trying to hide this in future, knowing that there are people analysing public data for oddities. Will it put off the gamblers, though?
link to this extract

Why do people keep coming to this couple’s home looking for lost phones? » Fusion

It started the first month that Christina Lee and Michael Saba started living together. An angry family came knocking at their door demanding the return of a stolen phone. Two months later, a group of friends came with the same request. One month, it happened four times. The visitors, who show up in the morning, afternoon, and in the middle of the night, sometimes accompanied by police officers, always say the same thing: their phone-tracking apps are telling them that their smartphones are in this house in a suburb of Atlanta.

But the phones aren’t there, Lee and Saba always protest, mystified at being fingered by these apps more than a dozen times since February 2015. “I’m sorry you came all this way. This happens a lot,” they’d explain. Most of the people believe them, but about a quarter of them remain suspicious, convinced that the technology is reliable and that Lee and Saba are lying.

“My biggest fear is that someone dangerous or violent is going to visit our house because of this,” said Saba by email. (Like this guy.) “If or when that happens, I doubt our polite explanations are gonna go very far.”

It’s billed as “a tech mystery”, and it really is.
link to this extract

Brave is the name, ad-blocking the game of new browser » Computerworld

Former Mozilla CEO (for 11 days) Brendan Eich is behind a new browser for desktop and mobile which blocks all ads and tracking by default:

“We are building a new browser and a connected private cloud service with anonymous ads,” Eich said.

In effect, Brave will first scrub websites of most of their ads and all tracking, then replace those ads with its own. But the latter will be aimed not at individuals but at the anonymous aggregate of the browser’s user base. If enough people gravitate to the browser, Brave will share its ad revenue with users and content publishers.

“We will target ads based on browser-side intent signals phrased in a standard vocabulary, and without a persistent user id or highly re-identifiable cookie,” Eich said. “By default Brave will insert ads only in a few standard-sized spaces. We find those spaces via a cloud robot.”

No user data will be recorded or stored by Brave, Eich promised.

Elsewhere, Eich said that 55% of Brave’s revenue would be shared with site publishers, and 15% with users, who could then turn that money over to their favorite sites or keep it.

Al Hilwa, an analyst with research firm IDC, applauded the concept of creating an alternate revenue stream from traditional advertising, but wondered whether the browser could compete, even in the niche that Eich described. “This is a laudable idea, but fighting ‘free’ is always risky,” said Hilwa in an email reply to questions.

Not sure the world has an appetite for a new browser, but one can envisage adblocking becoming built in and then enabled, just as pop-up blocking in browsers went from “pop-up what?” to “optional” to “on by default”.
link to this extract

India’s smartphone market is expanding quickly and by next year it should overtake the U.S. as the world’s second-biggest behind China, according to research firm IDC.

Just 35% of mobile phones sold in India now are smartphones, meaning there is room for growth as people upgrade from basic devices. Indian consumers, however, tend to purchase inexpensive devices: The average smartphone selling price in the country is likely to fall to $102 in 2018 from $135 in 2014, IDC says.

Apple’s problem has been that the sweet spot for smartphone sales in India has been handsets that cost less than $150. In a country where the average person earns about $1,500 a year and even middle-class consumers make less than $8,000 a year, the standard iPhone — which usually costs between $500 and $1,000 without a data plan — was just too expensive for most people to consider.

“Buying an iPhone is so expensive,” said Sakshi Maurya, a 20-year-old university student in New Delhi. She said she doesn’t understand why an iPhone is five times as expensive as some locally available Android phones. “It’s a luxurious thing.”

India poses a particular marketing challenge for Apple: it’s a mixture of very tech-savvy buyers and low-income buyers. Which does it target first, and how?
link to this extract

“The iPhone 6s and 6s Plus did quite well,” said Josh Lowitz, CIRP Partner and Co- Founder. “Yet, they did not dominate the same way that iPhone 6 and 6 Plus did a year ago. The total share of the new flagship models fell below the share of the then-new phones in 2014, and the large-format iPhone 6s Plus share of sales dropped compared to the iPhone 6 Plus as well. Customers continue to choose the year-old iPhone 6 and 6 Plus, and even the two-year old iPhone 5S.”

CIRP can’t say whether total sales are higher or lower (it samples 500 buyers of Apple devices in the previous quarter), just the mix. This looks like a subtle price deflation of the iPhone as people opt for 2014’s models over 2015’s – after all, they look the same to other people, even if the newer models has extra features.
link to this extract

On Tuesday, Apple released its “Music Memos” app, which is intended to let musicians (of any standard) record little musical thoughts that come to them on the guitar or piano directly to their iPhone or iPad, and add musical accompaniment.

Android doesn’t have that, because as has been noted here before its audio latency is too long – over 10 milliseconds, which is the longest pro musicians can bear. So how long have developers been prodding Google to improve Android’s audio latency?

I am developer of real-time audio signal processing applications. I am interested in creating
applications for sale in the android marketplace, but found that android has no method for real-
time low latency audio.

This is the first entry in a bug/feature request which continues to the present (latest entry is June 2015). The date of the entry? July 31, 2009 – slightly over nine months after the first Android phone. Is six and a half years a long time for a feature request to lie open? (And here’s Google’s official list of device latencies. Look for any at 10ms or below.)

Apple effectively gets 100% of the professional audience through this feature.
link to this extract