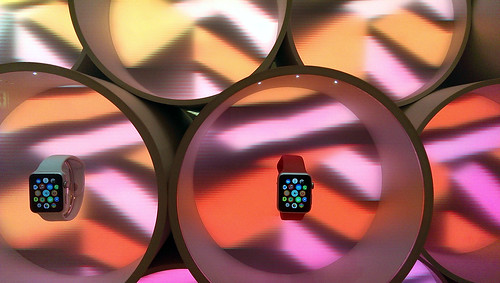 Apple Watch owners might get left behind with new phones unless they back up. Photo by Ian Muttoo on Flickr.

Symantec has fired an undisclosed number of employees after they were caught issuing unauthorized cryptographic certificates that made it possible to impersonate HTTPS-protected Google webpages.

“We learned on Wednesday that a small number of test certificates were inappropriately issued internally this week for three domains during product testing,” Symantec officials wrote in a blog post published Friday. “All of these test certificates and keys were always within our control and were immediately revoked when we discovered the issue. There was no direct impact to any of the domains and never any danger to the Internet.”

The post went on to say that the unnamed employees were terminated for failing to follow Symantec policies. Symantec officials didn’t identify the three domains the test certificates covered, but in a http://googleonlinesecurity.blogspot.com/2015/09/improved-digital-certificate-security.html, Google researchers said Symantec’s Thawte-branded certificate authority service issued an Extended Validation pre-certificate for the domains google.com and http://www.google.com.

“This pre-certificate was neither requested nor authorized by Google,” they wrote.

When you unpair an Apple Watch from an iPhone, your iPhone creates a backup of your Watch data and configuration, then wipes the Watch. Since so many people will be getting a new iPhone 6S [from Friday], I wanted to see if there was an easy way to pair an Apple Watch to a new phone and restore all important data.

According to this Apple document (thanks to Rob Wensing), iPhone includes your Watch backups when it runs an iCloud backup. So, in theory, and supported by a few of my Twitter followers, here is the easiest way to switch your Apple Watch to a new iPhone and keep all your data. I don’t know what your schedule is like, but it might be best to start this the night before you get your new iPhone.

It’s a five-step process but it could take a while; crucial to it is making iCloud/iTunes backups.
link to this extract

Dan Primack points out that the Crystal adblocker doesn’t play nicely with some US retail sites:

Walgreens.com had a similar problem to Sears, when using Crystal. The homepage worked, but the Safari browser went blank after clicking the “Shop Products” link.

And, as Mason said, this issue goes far beyond just image rendering. For example, everything (mostly) loaded just fine on the mobile sites for Lululemon and Walmart with Crystal enabled. But it was impossible to add any products to the shopping cart. So if you just went to browse the pretty pictures, then there’s no problem. If you want to actually buy something, however…

Even for mobile websites that are working properly from a customer perspective, such ad-blocking technology also can strip out back-end code like Google Analytics or Adobe’s Omniture, which provide retailers with real-time insights into customer behavior. And then there is the whole matter of how retailers generate around 60% of their mobile web traffic inorganically, via online ads that Crystal and other ad-blockers are designed to eliminate.

“Retailers can work around it on the consumer side by doing a lot of recoding, but a lot of them freeze their codes on November 1, ahead of the holiday shopping season,” Branding Brand’s Mason says. “So that gives them just over a month or so to get it done. On the back-end they could use different sources of information for sales — kind of like checking the cash register instead of receipts — but it is a different process and also depends, in part, on if the sites are hosted on servers in-house or not.”

Do these retailers have any of the world’s smallest violins in stock? I feel I need one. A few things: Crystal isn’t the only adblocking app; Dean Murphy, Crystal’s developer, is looking at the problem; and as for “real-time insights into customer behaviour”, well, tough. Looks like it might be back to interpreting logs.
link to this extract

Preemadonna turns your smartphone into a nail salon » TechCrunch

The Lacey, which will retail for $199, uses your smartphone’s back camera and prints full color art on nails in just a few seconds. The only thing you have to do before putting your finger under the Nailbot is prime your nail with white polish.

The Nailbot uses inkjet, and will eventually use actual nail polish, that is controlled through its system over wireless connection (BLE) to decorate the nail with a swipe or through a motorized solution. The Nailbot utilizes Hewlett Packard’s thermal technology, your phone’s camera, machine vision, computer vision and other technologies. In addition to the Nailbot itself, users can create, design, modify and share their art with the accompanying app.

Wow. If there were a job I would have thought was safe from robots, it would be nail salon worker. Side note: how great to see a story about something involving a service for women.
link to this extract

Nokia’s fall from the top of the smartphone pyramid is typically put down to three factors by executives who attempt to explain it: 1) that Nokia was technically inferior to Apple, 2) that the company was complacent and 3) that its leaders didn’t see the disruptive iPhone coming.

We argue that it was none of the above. As we have previously asserted, Nokia lost the smartphone battle because of divergent shared fears among the company’s middle and top managers led to company-wide inertia that left it powerless to respond to Apple’s game changing device.

In a recent paper, we dug deeper into why such fear was so prevalent. Based on the findings of an in-depth investigation and 76 interviews with top and middle managers, engineers and external experts, we find that this organisational fear was grounded in a culture of temperamental leaders and frightened middle managers, scared of telling the truth.

Ex-Nokia people on Twitter disagree pretty strongly. And it’s hardly as if Apple was led by a gentle consensus-seeking always-relaxed paragon. (We don’t know how frightened its middle managers are/were, either.)
link to this extract

Reuters reports that around 200 hardware and design staff have been laid off, following the completion of work on an Android device codenamed “Venice”. It’s the latest in a succession of “resource reallocations”.

BlackBerry has struggled to achieve significant volumes since BB10 launched in January 2013, with only 1.1 million units shipped last quarter. The total number is shipped is probably lower than 10 million.

BlackBerry’s CEO John Chen has repeatedly said that BlackBerry will only continue to develop handsets if it’s profitable to do so, and that the break-even point hadn’t yet been reached. Chen has shied away from committing to enhancing BlackBerry’s own BB10 platform, and various indicators suggest it’s now Android or bust for BlackBerry phones, with BB10 placed in maintenance mode while continuing to receive critical security updates.

BlackBerry continues to hire in its QNX embedded systems division, but hasn’t advertised for BB10 developers for some time. While the company released a redesigned Passport in August, it hasn’t revealed any significant enhancements to BB10 this year. Its BB10 developer program is gathering cobwebs.

Chen has also qualified a commitment he made at MWC in March to produce four phones this year. It may just be one annually.

BlackBerry announces its second-quarter results at 0800EST (1300BST). Analysts reckon its revenues will be $611m, down a third from a year ago – its lowest figure since the same period in 2006.
link to this extract

Stephen Daintith, finance director at DMGT [which owns the Daily Mail and Mail Online], said the company expects Mail Online to “comfortably” pass £70m for its full financial year to the end of September.

The company has previously said that it was aiming to make £80m in revenue this year, although it has said this is not a “hard target”.

The slowdown prompted analysts at Exane to publish a note to investors earlier this month warning that Mail Online was likely to miss its stated revenue target of £100m by the end of next year.

Daintith admitted that given the slowdown, hitting £100m next year was now a “big goal”.

Never seen adblocking mentioned before in an analyst note, but this is quite a slowdown; previously it was 50%.
link to this extract

As a paper, we pride ourselves both on dishing out and taking criticism – especially when the latter comes from our readers.

And part of that conversation has taken place on our online comment boards.

However, the increasing use of Sun comment boards for anonymous, negative, even malicious personal attacks, albeit by a minority, has led us to conclude our current commenting system is not serving the interests of the majority of our readers.

Therefore we have decided, for the time being, to no longer allow commenting on most online articles until we sort out a better and more accountable way for our readers to interact with us and each other.

Like a growing number of news organizations, we are also moving away from anonymous commenting because there are other options that encourage respectful, civil debate.

Much of that debate already takes place on social media.

Should we call this “reader-blocking”? “Comment-blocking”?
link to this extract

many OEMs who never thought they could compete on the global market are now directly competing with Samsung Electronics and Apple for market share and consumers’ mind share. To compete with Samsung Electronics and Apple, many upcoming OEMs are wasting millions of dollars creating too many SKUs that they may eventually never sell. We created an economic model that shows that through SKU consolidation, one could see an 8% margin improvement through aggressive SKU management. This column is a flyover, but you can find more information here.

Apple has 6 SKUs, globally (different models; memory capacity and colour aren’t counted as SKUs) while Samsung’s SKU count is 14 for the Galaxy S6, 13 for the S6 Edge, 6 for the Edge Plus and 1 for the S6 active. That’s 34 SKUs, even before you look at the Note 5 and all the others.

Too many SKUs are an obvious problem because you have to match production, distribution, demand and sales – else you’re left with inventory or other writeoffs.
link to this extract