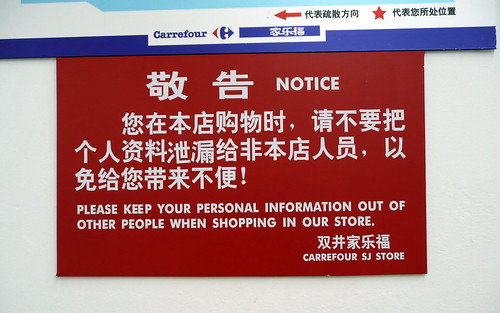 Keeping your personal information out of other sites is hard too. Photo by xiaming on Flickr.

A selection of 10 links for you. Count them if you like. I’m charlesarthur on Twitter. Observations and links welcome.

Laptop is a state of mind | Karma

There’s no such thing as “best of both worlds” in computers. Choices matter. Hybrids like the Surface Book are great for people who perfectly straddle the tablet and laptop use cases — who constantly switch between keyboard and pen, desk and walk-and-talks, angry memos and Angry Birds. Everyone else’s perfect “laptop” will probably be a lot more boring, and a good deal cheaper.

You know what would be cool? A world where we actually needed Surface Books. What if our lives were like Microsoft Surface commercials? We’d flit effortlessly between different roles. An architect for one moment, consulting with a professional on your home remodel. Then you’re drawing up a clever football play for Russell Wilson. Then you’re playing Madden, streamed from your Xbox. Then you’re answering work emails and flicking away distractions with your finger. And then you’re in some big song-and-dance number, and you can’t even remember where you put your Surface Book because your life is amazing and who even cares anymore you’re going to die happy, loved by your family and respected by your peers.

“It was discovered that a number of primary [bitcoin] wallets were shared between campaigns, further supporting the notion that all of the campaigns, regardless of the campaign ID, are being operated by the same entity.”

Unfortunately for those unlucky enough to get infected by CryptoWall 3.0, the report paints the picture of a highly efficient operation running solid encryption, meaning victims usually do have to pay up to get their files back.

Even an FBI Special Agent was quoted as saying last week that it might be better for infected businesses to just pay the ransom.

Who knows what about me? A survey of apps’ behind-the-scenes personal data sharing to third parties » Technology Science

For location data, including geo-coordinates, more iOS apps (47%) than Android apps (33%) share that data with a third party. In terms of potentially sensitive behavioral data, we found that 3 out of the 30 Medical and Health & Fitness category apps in the sample share medically-related search terms and user inputs with a third party.

Finally, the third-party domains that receive sensitive data from the most apps are Google.com (36% of apps), Googleapis.com (18%), Apple.com (17%), and Facebook.com (14%). 93% of Android apps tested connected to a mysterious domain, safemovedm.com, likely due to a background process of the Android phone. Our results show that many mobile apps share potentially sensitive user data with third parties, and that they do not need visible permission requests to access the data.

Hardly seems a source of complaint if they’re sharing with Google and Apple, if it’s with permission. As for safemovedm.com, it seems to exist – since February 2008 – but not actually be active in any way; that makes it sound like an Android function.
link to this extract

Over the last few days, there’s been some confusion about the future of Chrome OS and Chromebooks based on speculation that Chrome OS will be folded into Android. While we’ve been working on ways to bring together the best of both operating systems, there’s no plan to phase out Chrome OS.

With the launch of Chrome OS six years ago, we set out to make computers better—faster, simpler and more secure—for everyone. We’ve since seen that vision come to life in classrooms, offices and homes around the world. In fact, every school day, 30,000 new Chromebooks are activated in U.S. classrooms—that’s more than all other education devices combined. And more than 2 million teachers and students in more than 150 countries have the Share to Classroom Chrome extension, which launched in September and gets students onto the same webpage, instantly. Meanwhile, companies such as Netflix, Sanmina, Starbucks and of course Google, are using Chromebooks given the ease of deployment, the ability to easily integrate with existing technologies, and a security model that protects users at all levels, from hardware to user data. (Chromebooks are so secure you don’t need antivirus software!)

“Working on ways to bring together the best of both operating systems” implies that the two are coming together somehow – you wouldn’t have a third OS. Android isn’t going away. So Lockheimer hasn’t explained how ChromeOS is here to stay; instead, by avoiding the question while also acknowledging that something is happening, he’s making it more mysterious.
link to this extract

The Apple iPhone 6s and iPhone 6s Plus review » Anandtech

The only real issues I can think of are that the iPhone 6s doesn’t have OIS and that the base SKU is still 16GB of storage. To be fair, the 16GB SKU can become a noticeable user experience issue if you’re constantly dealing with the limits of this storage, and the jump from 16 to 64 GB feels like it’s simply designed to encourage buying a more expensive SKU. There are arguments that users that don’t really take a ton of photos or videos and stream all their media will be fine, but it’s still a user experience problem in this day and age. However, despite these issues I would argue that the iPhone 6s’ are the best phones you can buy today.

Of course, this sounds like a rather hollow recommendation to those that have followed our reviews for the past year. This year, more than ever it feels like Android smartphones at the high end have stood still, as if smartphone improvements have become a zero sum game. To make the best phone this year is therefore a pretty low bar to clear.

The benchmarks, especially for storage, are remarkable: the new iPhones seem to knock everything aside in the raw processing power space. They stumble only a little in the battery life area, and even there it’s not a huge difference. (Thanks @papanic for the link.)
link to this extract

Samsung has been selling more cheaper smartphones, and fewer high-end premium devices, than it did even compared to Samsung’s rocky 2014, according to numbers from data firm Counterpoint Technology Market Research.

Samsung shipped 84m smartphones in the third quarter of 2015, 6.3% more than during the same stretch last year and more than the No. 2 and No. 3 players, Apple and Huawei Technologies, combined, according to Counterpoint.

But while 55% of its smartphones were priced at $301 per unit or more at this time last year, that high-end segment has fallen to just 40% of Samsung’s overall smartphone sales, Counterpoint said.

Phones priced $200 or below now account for 38% of total units shipped at Samsung, versus 30% this time last year.

So while Samsung is indeed shipping more smartphones, it isn’t charging as much for them — or making as much money from them as it may have during the salad days of 2012 and 2013.

But the numbers also suggest that Samsung is willing and able to take the fight to the low-cost Chinese competitors that emerged in 2013 and 2014, eating away at its market share and profits.

If you calculate the numbers (I did) this means that Samsung sold 10m fewer phones in the $300+ bracket than last year – effectively ceding that chunk of the market to Apple – and sold 8m more than last year in the sub-$200 bracket.
link to this extract

…In the case of Samsung, the top device brand in India and Brazil, older versions of the Galaxy and the Note will never get the new Marshmallow OS update. So while some users may want to upgrade, they simply may not be able to depending on which device and carrier they have…

…When looking across the three popular Android OS, Lollipop, KitKat, and Jelly Bean, Brazilian users are currently pretty evenly spread out across the three. But when we look at India, the majority of users—52%— are on KitKat. As users in Brazil move to new operating systems, users in India are staying on older OS versions much longer.

This is hardly amazing; Jelly Bean was released in late 2012. You’d be more surprised if newcomers to the smartphone market were on much older OSs.
link to this extract

What do recruiters look for in a resumé at first glance? »Quora

Our world is a lot simpler than you think. “Does this candidate seem like they stand a chance of being a good match for this role? If yes, proceed to next step. If no, reject.” Each recruiter is different, so there’s no one way to answer this question. But I’ll highlight briefly (actually, not so briefly) how I personally absorb a resume.  I should preface this by saying that currently I primarily recruit for senior-level software engineers.

It’s definitely useful if you’re looking around for jobs, especially the stuff about education not mattering much, nor formatting (duh), nor “uncomfortably personal details”, nor cover letters.
link to this extract

Pagefair being, of course, the company which is complaining about the cost of adblocking to publishers, and which offers analytics to them:

If you are a publisher using our free analytics service, you have good reason to be very angry and disappointed with us right now. For 83 minutes last night, the PageFair analytics service was compromised by hackers, who succeeded in getting malicious javascript to execute on websites via our service, which prompted some visitors to these websites to download an executable file. I am very sorry that this occurred and would like to assure you that it is no longer happening.

The attack was sophisticated and specifically targeted against PageFair, but it is unacceptable that the hackers could gain access to any of our systems. We identified the breach immediately, but it still took over 80 minutes to fully shut it down.  During this time, visitors to websites owned by the publishers who have placed their trust in us were targeted by these hackers.

The damage was mitigated by our standard security practices, but the attackers still gained access.  I want to take some time here to describe exactly what happened, how it may have affected some of your visitors, and what we are doing to prevent this from ever happening again.

Spearphish email to take over account on CDN (Content Distribution Network) which offered a fake Adobe Flash advert which would install a bitcoin mining trojan. The breach was spotted within 5 minutes – but it took another 80 to regain control. Among the sites infected was Anandtech.

Once more, episodes like this make people who use adblockers utterly certain that they’ve made the right decision, while making those who haven’t wonder if they should. It’s a ratchet.
link to this extract

According to Indoor Survey’s iOS App Store page, spotted by developer Steve Troughton-Smith, the Apple-branded software enables indoor positioning within a venue by using radio frequency signals and an iPhone’s onboard sensors.

“By dropping ‘points’ on a map within the Survey App, you indicate your position within the venue as you walk through,” reads the app description. “As you do so, the indoor Survey App measures the radio frequency (RF) signal data and combines it with an iPhone’s sensor data. The end result is indoor positioning without the need to install special hardware.”

While not an exact match, the described system smacks of technology pioneered by indoor positioning startup WiFiSLAM, a Silicon Valley firm Apple snapped up for $20m in 2013.

Google has been doing something similar since 2012 for museums and a SLAM (simultaneous location and mapping) system since September 2014.
link to this extract