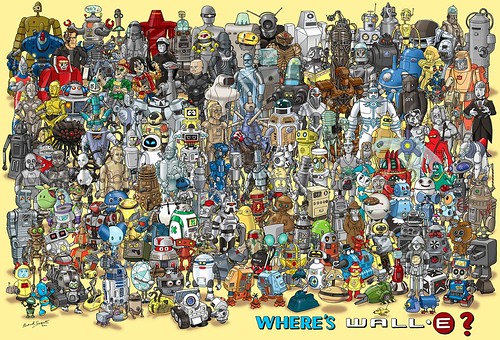 They’ve come for your job. Picture via sweenpole2001 on Flickr.

In our horrifying future, very few people will have work or make money » Alternet

A friend, operating from his home in Tucson, recently invented a machine that can find particles of certain elements in the air.

He’s already sold hundreds of these machines over the Internet to customers all over the world. He’s manufacturing them in his garage with a 3D printer.

So far, his entire business depends on just one person — himself.

The combination of advanced sensors, voice recognition, artificial intelligence, big data, text-mining, and pattern-recognition algorithms, is generating smart robots capable of quickly learning human actions, and even learning from one another.

If you think being a “professional” makes your job safe, think again.

This is the Robert Reich who was Secretary of Labor for President Bill Clinton. You could argue that (1) he’s old and doesn’t know how this stuff is going to work out or (2) he’s seen these changes play out and is echoing what everyone else has, and that’s worrying.

In a speech last month, Lucian Grainge, Universal Music’s chairman, decried the ad-supported portions of on-demand streaming services as “not something that is particularly sustainable in the long-term”; Warner Music’s chief executive, Steve Cooper, has suggested the free and paid portions of streaming services should be “clearly differentiated.” Bolstering this point of view: Apple, according to major-label sources, is planning to relaunch Beats Music as early as this summer as a $10-per-month paid service to complement its free, ad-supported iTunes Radio.

At least one of the three major labels is in the process of renegotiating its contract with Spotify this year, sources say, and most are pushing for this sort of change to the free service. “It’s one of those rare things— artists and labels are unified about their skepticism of the model,” says a second major-label source. “You can’t have a service that’s unlimited, ad-supported, free. Every other service — Sirius XM, Netflix — doesn’t offer its product unlimited, for free, in any context.”

Spotify has an incredibly low conversion rate to paid subscribers, even with its Christmas giveaway (be interesting to see how long it takes to get those “new” subscribers who took up its free offer to stick). Problem is the music industry is setting too high a price per play. Something’s gotta give.

Nowadays, Chinese internet users tend to make payments and bank transfers on-the-go, via public WiFi networks because it is just there and free. However, this habit could make you easy prey for hackers who set up fraudulent WiFi in shopping malls or entertainment centers.

Once WiFi squatters connect their mobile device to this network, their personal information is in danger of being stolen. If they conduct any kind of purchase or transfer in the meantime, hackers can record their IP address and information at the back-end, and then steal their accounts and passwords.

Although QR codes never quite took off in the West, they have become immensely popular in China as customers scan codes to find friends, make payments, exchange information, redeem coupons, follow services on WeChat, and so on. Hackers can embed a virus to QR codes so that anyone scanning them will automatically download a virus to their smartphones. Personal information from phone numbers to bank details and passwords can be stolen in seconds.

In this case, hackers send out short messages in fraudulent bank service numbers to lure users to log in to a fake website. Once customers input bank accounts and passwords on the site, hackers will steal the information and be able to access the money in their bank accounts.

Rumors of iAd’s demise have been greatly exaggerated.
Starting on Thursday, Apple is extending its mobile advertising network to iTunes Radio, its web streaming service that competes with Pandora, through programmatic ad buying. Previously, advertisers had to buy through Apple’s lean iAd sales staff. The new feature also comes with updated targeting capabilities, using customer phone numbers and email addresses that can be cross-referenced anonymously against marketers’ data.

You’re (and I am) thinking: how does this match with Apple’s rhetoric about privacy?

As it pitches advertisers, Apple is stressing privacy controls as paramount. When a brand matches Apple’s customer data with its own, Apple insists neither it nor the client can see which customer is matched. In recent months, Apple CEO Tim Cook has hammered home Apple’s devotion to privacy, particularly as he positions it against rival Google…

Any iPhone, iPad or Mac user who opts out of ad-targeting on their device is exempt from the targeting feature, said the executives working with iAd. Apple does not disclose how many of its millions of customers opt out. It’s a very small number, said an executive familiar with Apple.

Hmm. Even so, this seems to have the potential to sour the “privacy” story. Is iAd that important? Not in revenue terms, but maybe in tying advertisers to the whole concept.

This is coming out in dribs and drabs. Latest, by Chris Gayomali:

In the book Becoming Steve Jobs by Fast Company executive Rick Tetzeli and longtime technology reporter Brent Schlender, it’s revealed that Young tried to quash the beef by offering him a set of remastered vinyl editions of every album in his catalog. It was an “[attempt] to smoke the peace pipe,” writes Schlender:

I knew that Steve enjoyed listening to records on vinyl from time to time, so I agreed to call him to see if he’d like to get the LPs. Steve answered the phone on the second ring, and I explained what I was calling about. We had talked about Neil’s criticisms a year or so before, and I thought this might soften his grudge.

Fat chance. “Fuck Neil Young,” he snapped, “and fuck his records. You keep them.” End of conversation.

Jobs had a way with words, didn’t he. Wonder what he would have made of the Pono Player.

The annual Pwn2Own hacking competition wrapped up its 2015 event in Vancouver with another banner year, paying $442,000 for 21 critical bugs in all four major browsers, as well as Windows, Adobe Flash, and Adobe Reader.

The crowning achievement came Thursday as contestant Jung Hoon Lee, aka lokihardt, demonstrated an exploit that felled both the stable and beta versions of Chrome, the Google-developed browser that’s famously hard to compromise. His hack started with a buffer overflow race condition in Chrome. To allow that attack to break past anti-exploit mechanisms such as the sandbox and address space layout randomization, it also targeted an information leak and a race condition in two Windows kernel drivers, an impressive feat that allowed the exploit to achieve full System access.

The future of the dumbwatch » Marco.org

The Apple Watch isn’t just a watch, interchangeable like any other. It’s an entire mobile computing and communication platform, and a significant enhancement to the smartphone, which is probably the most successful, ubiquitous, and disruptive electronic device in history.

I suspect smartwatches will be a one-way move for most of their owners, and most people won’t wear two watches at once. The iPod didn’t make people appreciate portable music enough to buy a Discman for the weekends, and the iPhone didn’t ignite interest in flip-phones or PDAs.

Some people will always want to own and wear traditional watches, but they’ll only become more of a niche, not a growing market

“I know the company, I know the people, and I have the vision,” Wang, 56, told Bloomberg News in an interview. “I think I am the best candidate. I suggested it.”

Chou, 58, presided over HTC’s rise to the top of the U.S. smartphone rankings, the settling of a patent dispute with Apple Inc. and the purchase and sale of Beats Electronics. His reign also saw the stock drop and market share shrink as HTC suffered at the hands of cheaper models from Xiaomi Corp. and the broader lineup of Samsung Electronics Co.

“Peter had done poorly, but even with Cher’s return it will be difficult for HTC to turn things around,” said Jeff Pu, who rates the stock sell at Yuanta Financial Holding Co. “Her appointment may also imply that it’s difficult to find a fresh leader from outside.”

I love the bombast in Wang’s quote. But she was also the one who refused takeover approaches from Amazon a couple of years ago. She’s got her hands full now.

TAG Heuer and the future of the luxury watch… » Matt Richman

TAG Heuer’s smartwatch won’t sell. There’s no market for it.

Apple Watch requires pairing with an iPhone, and TAG’s smartwatch will need to pair with a smartphone to even have a chance of being as feature-rich as Apple Watch.

Apple isn’t going to re-engineer iOS for TAG’s benefit, so TAG’s smartwatch won’t pair with an iPhone the way Apple Watch does.

In order to have even a chance of being as feature-rich as Apple Watch, then, TAG’s smartwatch will have to pair with an Android phone. However, TAG wearers aren’t Android users. Rich people buy TAG watches, but rich people don’t buy Android phones.

This is TAG’s dilemma… Ultimately, this dynamic is representative of the entire luxury watch industry. Replace TAG with Rolex, Omega, Longines, or any other high-end watchmaker, and the problem is the exact same.

It’s not quite true that zero rich people buy Android, but the Venn diagram of overlap between “people who buy Android” and “people who buy TAG/Rolex/Omega” is very small. Add in the third circle of “people who want a smartwatch for that” and you’ve got a really tiny number – hundreds, perhaps?