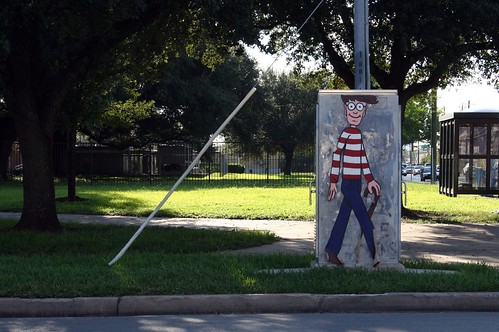 OK, that’s not so challenging. Picture by cybertoad on Flickr.

A selection of 9 links for you. May contain nuts. I’m charlesarthur on Twitter. Observations and links welcome.

While GT Advanced experienced difficulties with both the quality and quantity of sapphire, it is possible that Gorilla Glass was the better choice for the iPhone 6 and iPhone 6 Plus after all. TIME reported in September that sapphire, in its current form, has several properties that are less ideal than glass, including being thicker and heavier, more expensive, unable to transmit as much light and less durable after exposure to normal wear and tear. Sapphire also has up to double the screen reflectance of glass, especially under bright light, which could make it difficult to read the screen.

The reflective issue in particular could soon be a thing of the past, however, as DisplayMate confirmed to MacRumors that it has lab tested new sapphire technology that it believes will be a major breakthrough for smartphone displays. The display calibration and evaluation company found the production-ready enhanced sapphire to be at an advantage over both regular sapphire and glass based on the results of its testing, and predicted that “rapidly falling production costs” could make the material go mainstream in the near future.

I doubt that the sapphire being made at GT Advanced was planned for 2014’s iPhones. These problems would have been recognised, and the volumes would be too low to make screens for so many devices. Sapphire feels like a super-top-end product – as it is for Vertu. And that means low volume (comparatively).

Other phone makers are considering it, for sure.

Microsoft has acquired two iOS applications — Acompli (email) and Sunrise* (calendar) — for about $300 million. Those acquisitions are good for the founders (and their investors). Some might see it as a sign of a new Microsoft — aggressive and quick in trying to turnover a new leaf. To me, they are all of that, but more importantly indicative of the much deeper cultural rot facing Microsoft and its now not so new chief executive, Satya Nadella.

“He’s hit all the low-hanging fruit — that said, these things were not easy to do — but now he has to address all the long-term issues,” Brad Silverberg, a former Microsoft executive-turned-venture capitalist told Bloomberg Business in an interview. Spot on — and these two acquisitions are just a perfect example of these long term challenges.

It is a pretty damning indictment that Microsoft had to spend hundreds of millions on front end apps for its own platform –Microsoft Exchange — and it should send alarm bells ringing. Exchange is something Microsoft understands better than most and it should in theory be able to develop good apps as front end for it.

I don’t agree. Nadella is being pragmatic here: Microsoft is a big organisation, and it moves slowly. Everyone recognises that small startups can hit precisely the user needs that big organisations can’t see, or can’t develop for even if they see. It has done poorly in mobile so far.

What it’s doing with these app purchases is strengthening Outlook – locking it in place as a product that will continue to rake in money year after year, especially because everyone will get a great experience using it on mobile via these apps.

Maryana Pinchuk and Steven Walling addressed a packed room as they answered a question that has likely popped into the minds of even the most casual users of Wikipedia: who the hell edits the site, and why do they do it?

Pinchuk and Walling conducted hundreds of interviews to find out. They learned that many serious contributors have an independent streak and thrive off the opportunity to work on any topic they like. Other prolific editors highlight the encyclopedia’s huge global audience or say they derive satisfaction from feeling that their work is of use to someone, no matter how arcane their interests. Then Walling lands on a slide entitled, ‘perfectionism.’ The bespectacled young man pauses, frowning.

“I feel sometimes that this motivation feels a little bit fuzzy, or a little bit negative in some ways… Like, one of my favorite Wikipedians of all time is this user called Giraffedata,” he says. “He has, like, 15,000 edits, and he’s done almost nothing except fix the incorrect use of ‘comprised of’ in articles.”

Turns out to be 51-year-old software engineer Bryan Henderson. It beats commenting on websites as a lasting contribution, don’t you think?

Mark Gurman on the much-anticipated integration of Beats into Apple:

Rather than merely installing the existing Beats Music app onto iPhones, Apple has decided to deeply integrate Beats into iOS, iTunes, and the Apple TV. The company is currently developing new Beats-infused versions of the Music application for the iPad, iPhone, and iPod touch, as well as an updated iTunes application for computers that deeply integrates Beats functionality. A new Apple TV application is also in the works.

Based heavily upon cloud streaming, Apple’s new service is centered around the user’s music library. A new search feature will be able to locate any song in the iTunes/Beats catalog, and users will be able to stream music from the catalog as well as add songs to their personal libraries. Users will be able to select specific tracks to store on their iOS devices and/or computers, or keep all songs solely in the cloud. Apple will also deeply integrate Beats Music’s Playlists, Activities, and Mixes features into the new service, letting users access a vast array of pre-made, human-curated playlists to fit various activities. Surprisingly, Apple is likely to also update Beats’ social networking features, allowing people to follow other users and artists as they did with the failed Ping social music network.

Aiming for a lower price point than the $9.99 per month; Apple wanted $5 but is being pushed to $7.99 by labels. This fits with what I’ve been hearing from analysts and people in the music industry. A lower price is essential to getting more subscribers.

To make tech design human again, look to the past » WIRED

who’s doing it wrong? Examples are everywhere of touch screens existing where no touchscreen should be. Even our favourite innovators over at Tesla Motors have missed out on potentially great DigiLog experiences in their Model S. Personally, I’d love to redesign their console just so I could get that oversized iPad out of their otherwise amazing cars.

You can’t just lean on PARC-style metaphors in every single context moving forward. You have to evaluate and re-evaluate the tradeoffs of digital versus analog interactions. What you gain by dropping in a giant touchscreen that controls every aspect of your vehicle experience is easy to state: customizable skins and software upgradable UIs, but what is lost in the translation?

I’m pleased that he agrees with me about Android Auto and Apple’s CarPlay: I don’t like the distraction they imply. I also liked this diagram of touch done right and wrong:

(Via Neil Cybart’s Above Avalon newsletter. You should subscribe.)

Apple Pay will succeed for one simple reason: Everyone in the system has an interest in it succeeding. Card issuers like Apple Pay because it reduces their fraud liability. Card networks like it because it reinforces their role in the system. Merchants like that it precludes Target-style data breaches. Everyone has a reason to want Apple Pay to succeed, so it will.

Though Apple Pay will make Apple a ton of money, the strategic implications of the service are worth far more. With Apple Pay, Apple leveraged its business model, cultural influence, and customer base to enter arguably the most heavily-regulated international system on Earth in a way that everyone already in the system had a reason to like. This is an incredible accomplishment, and no other company could have done it.

Google does not control Android enough to create anything truly comparable to Apple Pay. Even if Google were able to add Apple Pay’s software components to Android, the company would have to rely on its hardware partners to replicate Touch ID and the secure element and to seamlessly integrate everything together. They’re not going to be able to do that for the foreseeable future.

A few nitpicks. Not all retailers like all aspects of Apple Pay – in particular, they don’t get customer data they got previously, and might still want. (Whether they should get that is another matter.) Also, 10% of all transactions is a lot – but his number shows that even a couple of percentage points is very valuable, and almost all profit.

On the topic of Google, there is Google Wallet – whose key problem is poor and inconsistent implementation. The secure element is already available in ARM chips. But it will take a long time to feed through to handsets in use.

Researcher IDC said Amazon showed the steepest annual decline among the five major tablet makers, with worldwide shipments of its Kindle Fire devices falling by as much as 70% compared with the holiday 2013 period. The declines come at a time when worldwide shipments in the fourth quarter fell for the first time since the tablet market’s inception in 2010.

But there’s a caveat in the results: IDC doesn’t count shipments of Amazon’s new six-inch version of its Kindle Fire HD tablet, introduced in September and ranked among the “most wished for” gift items of the holiday season. A spokesperson for the retailer criticized IDC’s methodology, saying “our most affordable tablet ever, the Fire HD 6 at $99, which is one of our high volume products, wasn’t included in the report.” She declined to discuss sales.

Er.. if you’re going to call it a “high-volume product”, shouldn’t you help people out by explaining what that volume is? Doing this is like saying the cake you’ve got in the fridge is wayyy bigger than people are saying. But then not opening the fridge. Mmm, cake.

IDC Senior Research Analyst Jitesh Ubrani said the researcher doesn’t consider the Kindle Fire HD 6 a tablet because of its screen size and its inability to connect to cellular networks. It’s more of a media player, in the researcher’s view. But even if the estimated 1.2m shipments of the device were included in IDC’s numbers, Amazon’s holiday tablet shipments would still be off by 50% from the prior year, he said.

Soooo… the Kindle has hit its ceiling for sales; the Fire phone was a flop; the Fire tablet has fizzled. Let’s look forward to not hearing how the Amazon Echo has sold.

The core function of Wishbone is to detect temperature using an infrared sensor. Wishbone is noninvasive, reliable and versatile for many applications. It can accurately measure body temperature by measuring forehead skin and examine liquid temperature from surfaces in just a few seconds. While measuring, Wishbone does not emit any radiation or sound as it uses a passive sensor.  Wishbone can also measure environment temperature by pointing it toward the sky or ceiling. Both Object and Ambient modes are still currently under development. 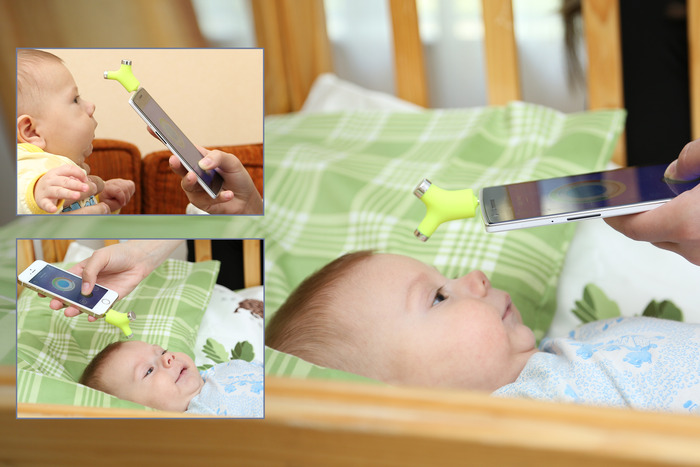 Works on iOS and Android (it plugs into the headphone jack). I think this is neat; I’ve backed it. (It’s already miles past its goal.) I like the idea of the Object and Ambient modes. Notice too how smartphones are now offering core functionality for medical products like this.

Yes, a simple alcohol thermometer is cheaper – but less flexible. As more people have smartphones, more functions and industries get sucked into them.

New Galaxy Tab 5 might have 4:3 aspect ratio as well » SamMobile

I’ve been told – endlessly – by people who claim it’s important that 16:9 is the “right” ratio for tablets because it means you can watch films without letterboxing. Now we find that Google (qua the HTC-built Nexus 9) and now perhaps Samsung are going for 4:3, like the iPad… which has seen the most success in the market.