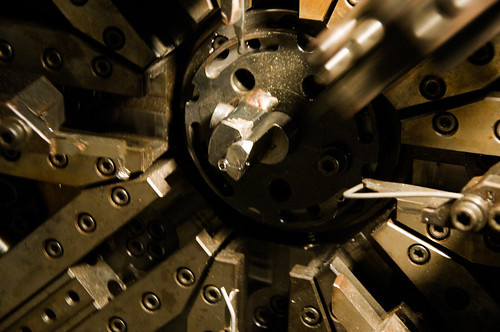 No, you can’t manufacture that like Apple does >> Medium

What happened when Apple wanted to CNC machine a million MacBook bodies a year? They bought 10k CNC machines to do it. How about when they wanted to laser drill holes in MacBook Pros for the sleep light but only one company made a machine that could drill those 20 µm holes in aluminum? It bought the company that made the machines and took all the inventory. And that time when they needed batteries to fit into a tiny machined housing but no manufacturer was willing to make batteries so thin? Apple made their own battery cells. From scratch.

Pretty much no company, big or small, can afford to do these things. Yes, Apple has done a great job building many of these products and yes, consumers have come to love many of these difficult-to-manufacture features. But you are not Apple. So long as you’re providing value to your customers, taking the fit and finish of your product down a notch is okay. Especially for your first few production runs.

So what should you avoid? Here’s a few things that Apple often does that can cause problems for a startup.

The “white plastic” one in the list that follows is so obvious when you think about it, but non-obvious until it’s pointed out (or seen).

Samsung Electronics agreed to sell its fibre optics operations to US specialty glass maker Corning Inc, exiting another non-core business to focus on shoring up underperforming key areas like smartphones.

Terms of the sale, including plants in China and South Korea, weren’t disclosed. Announced by both parties on Tuesday, the South Korean firm’s second exit from a business line this quarter comes as it braces for its lowest annual profit in three years, squeezed by stiff competition…

…The firm also said in October it will halt its light emitting diode lighting business outside of its home country, which was also considered a non-core business.

Ben Thompson on disruption, and what Clayton Christensen’s theory lacks because it doesn’t include user experience as a factor:

That’s the thing though: the quality of a user experience has no ceiling. As nearly every other consumer industry has shown, as long as there is a clear delineation between the top-of-the-line and everything else, some segment of the user base will pay a premium for the best. That’s the key to Apple’s future: they don’t need completely new products every other year (or half-decade); they just need to keep creating the best stuff in their categories. Easy, right?

He’s totally right that Apple should have bought Dropbox; but Steve Jobs couldn’t see the inherent, coming value of the cloud – even though it was Jobs, in 1997, who told developers about the importance of network computing and not having to worry about locally stored data.

Android 5.0 Lollipop delay for HTC One and One M8 Google Play Editions >> TechRadar

The reason for the first delay was pretty vague, with Google simply stating that it would “need to re-spin SW”. If we were to Google Translate that confusing statement into plain English, we’d guess that it meant Google needed time to tweak and update the Android 5.0 Lollipop software.

That delay pushed back the expected Lollipop update to December 1. However that date came and went with no sign of the update.

It soon emerged that the Lollipop Update has been delayed once again, with Mo Versi, HTC’s VP of Product Management, reporting that the delay this time is due to Google being too busy at the moment, but that we should expect the update soon.

Just to be clear – that’s for the stock Android versions of the HTC One and M8, not those with HTC’s Sense skin. “Too busy” is a great reason.

When Kindle Unlimited launched in the US 4 months ago there were many questioning whether it was good or bad for authors, and if the chorus of complaints over the past few days are any indication then the answer will be no.

HM Ward kicked off the discussion on Friday when she revealed that she was pulling out of KDP Select, the program Amazon uses to funnel indie ebooks into Kindle Unlimited.

Ward withdrew her books not because the average payment had dropped to only $1.33, but because her total revenues had fallen by 75%

Kindle Unlimited is Amazon’s ebook subscription service. All the news from authors seems not to be positive.

Matt Levine with a terrific explanation of the “flash crash” of Apple stock, which seems to have mostly been driven by computer-based high-frequency trading. Because no human reacts that fast:

You’ve lost several thousand dollars on your Apple trades. Maybe you should cut your losses and get out? Again, you are not, like, pondering this in your heart of hearts: You are an algorithm, and you are programmed with some loss limits, so you cut your losses and start selling. So instead of dampening volatility, you actually start increasing it.

In the matter of reforming things, as distinct from deforming them, there is one plain and simple principle; a principle which will probably be called a paradox. There exists in such a case a certain institution or law; let us say, for the sake of simplicity, a fence or gate erected across a road. The more modern type of reformer goes gaily up to it and says, “I don’t see the use of this; let us clear it away.” To which the more intelligent type of reformer will do well to answer: “If you don’t see the use of it, I certainly won’t let you clear it away. Go away and think. Then, when you can come back and tell me that you do see the use of it, I may allow you to destroy it.”

This is clearly why Chesterton never got venture funding in Silicon Valley.

Timothy Stenovec applies a suitably sceptical eye to the news, recalling how coincidentally a year ago Amazon told 60 Minutes about its drone plans:

This year, Amazon appears to be trying the same thing again – only this time, it’s with robots. The company recently invited a select group of journalists – I was not one of them – to tour one of its California warehouses and watch robots move 750-pound shelves of products. Amazon says it uses 15,000 such robots in its facilities, and that the machines, a result of Amazon’s $750m purchase of robot-maker Kiva Systems in 2012, will cut costs, save you money and help get products to you faster.

There was no news of Amazon’s robot fleet until just after midnight on Monday, when suddenly a flood of stories appeared – suggesting that the news was “embargoed,” a term for the common media practice of agreeing not to publish certain information until a certain time.

The robots are interesting, and every journalist knows about having something to please the editor for a Monday morning. Perhaps brick-and-mortar stores could start PR schemes where they show how they’re paying tax?

With $880,998 in funding, well exceeding its $250,000 asking price, Ring was a smart device that was meant to Bluetooth control everything in your life — except that it doesn’t. Not by a long shot.

We debunked the thing outright as soon as it showed up on Kickstarter in March, but that didn’t stop thousands of backers from signing up for the product and who are now probably regretting that $269 monetary decision. YouTube user Snazzy Labs breaks down every facet of the ring, and why it’s such a terrible, terrible waste of money.

“Comically unusable” is among the more generous phrases used by Snazzy Labs (cool name bro) in the video, which is worth watching just to see how wearables should not be done, ever.

Santa or the Grinch: Android tablet analysis for the 2014 holiday season >> Bluebox Security

Bluebox Labs purchased over a dozen of these Black Friday “bargain” Android tablets from big name retailers like Best Buy, Walmart, Target, Kmart, Kohl’s and Staples, and reviewed each of them for security. What we found was shocking: most of the devices ship with vulnerabilities and security misconfigurations; a few even include security backdoors. What seemed like great bargains turned out to be big security concerns. Unfortunately, unsuspecting consumers who purchase and use these devices will be putting their mobile data & passwords at risk.