Somehow this didn’t publish on May 21 as it should have. Bah. 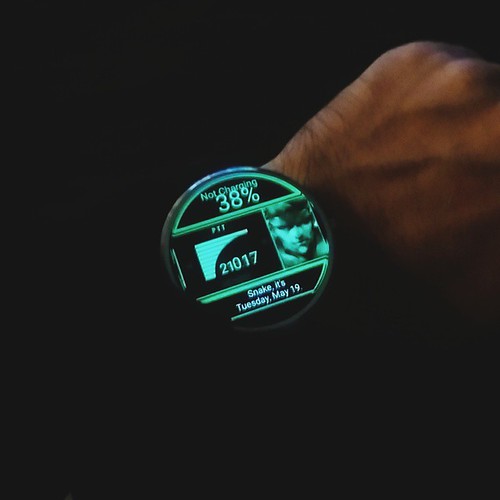 Android Wear lets you do all sorts of watchfaces. Photo by leolambertini on Flickr.

Aram Roston and Max Seddon, with a blockbuster piece:

After Western sanctions began shutting down sales of high-tech internet equipment to Russia’s military and security forces, employees at technology giant Cisco Systems Inc. altered sales records and booked deals under a false customer name, according to internal company documents. The intent, according to a confidential source with deep knowledge of Cisco’s Moscow operations, was to dodge the sanctions by masking the true customers behind more innocuous-sounding straw buyers.

Nonononononotatall we were just correcting some errors, says Cisco.
Remind me again about how Buzzfeed is just cat pictures and listicles?

Joshua Drummond on the outrage (overhyped) about students in a sex education class being handed literature that, um, outraged some people:

By analogy, it’s a lot like students studying World War Two. Some knowledge of the Nazis’ peculiar, perverted ideology and the conditions in which it flourished is necessary to understand how the war got going. But no-one’s being taught that Nazis are rad, any more than they’re being taught that unmarried women are sluts in this particular case. The lesson was – and why not have some fun with paraphrasing – intended to point out the unfortunate truth that there are a lot of dicks in the world and some of them try to force their dickery on others. I’d have thought this was a pretty important lesson, especially when it comes to sexual health, and where better to experience it than in the (relatively) safe space of a health education class?

No! said Labour education spokesperson Chris Hipkins, who thundered mildly: “It’s fine for schools to be using stuff to provoke kids into thinking but there’s a fine line between provoking critical thought and something that’s offensive. That, I think, crosses the line.”

Well, I suppose that’s up for debate. Should students be privy to the extremist views of nutcases?

What’s most worrying is that, as always happens, the initial distortion gets far more broadly distributed than the correction.

Think about that: the wrong stuff always gets the broader distribution.

Facebook’s Internet.org comes under fire for being a walled garden » Fortune

In effect, says the EFF, the structure of Internet.org means that Facebook has set itself up as a gatekeeper when it comes to accessing the Internet, and this means that it has “issued an open invitation for governments and special interest groups to lobby, cajole or threaten them to withhold particular content from their service.” Until the social network truly opens up the project to anyone and everyone, Internet.org will “not be living up to its promise or its name,” the foundation says.

An interdisciplinary MIT study led by the MIT Energy Initiative has led to a 332-page report entitled The Future of Solar Energy. Among its key findings are that today’s solar panels are all that is needed to supply the world with many terawatts of clean solar power by 2050 (a terawatt is equivalent to 1,000,000 megawatts). The other main point the study makes is that it will take political will to finally wean the world off of fossil fuels.

I was pointed to this on Twitter by Leonardo DiCaprio. Yup, him. Not personally, you understand.

Abdel Ibrahim, commenting on 9to5Mac reporting on KGI research lowering its estimat for the lead from 20-30m to “just” 15m:

As with any new product, it takes time for things to get going. New features, functions, and even new versions are what will be the most important test for Apple Watch in the coming years. Most V1 products are usually adopted by the comparatively small minority of Apple fans who are interested in the company’s latest gadgets.

15m feels astonishing. For a v1 product? And as Ibrahim points out, that’s a lot more than Android Wear seems to be doing (downloads passed 1m in late February, now around 1.2m).

The app can be launched from the app launcher or by voice with an “open Maps” command, and when opened you get a full screen top-down map experience. You can scroll around, pinch-to-zoom (barely) and even switch between true North and device direction views. Zoom in/out buttons appear on the top of the screen when you tap it, which is much better than pinching, and you also get a small pin button that lets you quickly scroll through nearby places and navigate to them — though when you fire up navigation from the Maps app on the watch it still corresponds with launching Maps on your phone.

There’s even a neat feature that gives you a simple black and white outline map when the watch doesn’t receive interaction for while, just like the ambient watch faces do.

Aside from the handful of reboots of our phone and watch that were necessary just to get it to run, the app still seems rather unstable. Several times in just a few minutes of playing with the app it has failed to respond or open up navigation properly — we have a feeling that this isn’t quite ready without a new version of Google Play Services or potentially a new version of Android Wear on the watch.

Options for resizing: pinch-to-zoom or prodding a plus/minus onscreen tab. Neither seems ideal. The black/white outline map is horrible. The “list of pins” looks smart.

How do I get rid of the “Try the New Drive” banner? » Google Product Forums

Q: It is super annoying and it won’t go away. I’ve tried going to the new drive and then coming back, but it’s still there. I like the old drive a lot better than the new one and I want to stay on it. This banner is basically trying to force me to use the new drive which I *don’t want to do*. Anyone know if there’s a way to get rid of it??

And wouldn’t you know, there’s a Googler ready with an answer. However…

Ben Thompson has a fantastic examination of the Watch’s potentials, and limits, as well as Apple’s advantages and strategic disadvantage:

it’s clear that what the mouse was to the Mac and multi-touch was to the iPhone, Siri is to the Watch. The concern for Apple is that, unlike the others, the success or failure of Siri doesn’t come down to hardware or low-level software optimizations, which Apple excels at, and which ensures that Apple products have the best user interfaces. Rather, it depends on the cloud, and as much as Apple has improved, an examination of their core competencies and incentives argues that the company will never be as good as Google. That was acceptable on the phone, but is a much more problematic issue when the cloud is so central to the most important means of interacting with the Watch.

A key advantage: lots of people who will buy it and use it, creating a virtuous circle for developers who write for it. (Yes, a calculator for the Watch.)

A few hours ago, Bomani X @AceBoonCoon  updated his twitter feed with yet another one of his shocking discoveries on Google Maps.  Yesterday the world took notice when he posted an image of his Google Maps results where he found that when he searched for the keyword ‘nigga’ or ‘nigger’ , the White House would come up. Unfortunately, President Obama and his family are not the only targets of this deplorable prank. When you run a Google Maps search for ‘nigger university’ you get search results for ‘Howard University,’ a private university in Washington, D.C.

Beginning to look like we’re discovering the limits of useful crowdsourcing. (Though of course the Google search for “miserable failure” of a few years ago was already showing the dangers.)

US auto sales may drop about 40% in the next 25 years because of shared driverless cars, forcing mass-market producers such as General Motors Co. and Ford Motor Co. to slash output, a Barclays Plc analyst said.

Vehicle ownership rates may fall by almost half as families move to having just one car, according to a report published Tuesday by the analyst, Brian Johnson. Driverless cars will travel twice as many miles as current autos because they will transport each family member during the day, he wrote.

Large-volume automakers “would need to shrink dramatically to survive,” Johnson wrote. “GM and Ford would need to reduce North American production by up to 68% and 58%, respectively.”…

…When most vehicles are driverless, annual U.S. auto sales will fall about 40% to 9.5%, while the number of cars on American roads declines by 60% to fewer than 100m, he estimated.

“While extreme, a historical precedent exists,” Johnson wrote. “Horses once filled the many roles that cars fill today, but as the automobile came along, the population of horses dropped sharply.”

Hard to argue against that one.