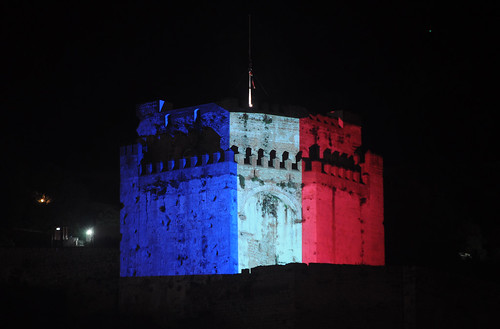 A castle in Gibraltar lit up with the French colours in solidarity following the killings on Friday night. Photo by ollygringo on Flickr.

“It’s War”: being a cop in post-Charlie Hebdo France » Matter on Medium

These gendarmes had caught something early on in the TV footage that told them a very, very terrible event had transpired. The riot branch of the national police was visible in the background of the newscast. Usually, they carried only nine-millimeter handguns. Now they all had M14s.

Eight of Theo’s colleagues watched the cop’s killing on YouTube together. Theo’s dark, serious eyebrows raised in astonishment, then knitted together as he immediately went into analytical mode.

His training permitted him to watch the violence more coldly than your average guy. But as his normally scheduled, 24-hour shift wore on, his professional distance vanished. “Gros fils de pute de merde,” he texted another gendarme he knew, a guy from a mobile intervention platoon.

There’s a sea change going on in how the police think of their job in modern France, McClelland suggests. (If you’ve seen the most recent series of the French policier series Engrenages – “Spiral” in the UK – you have a sense of it.)
link to this extract

What ISIS really wants » The Atlantic

Our ignorance of the Islamic State is in some ways understandable: It is a hermit kingdom; few have gone there and returned. Baghdadi has spoken on camera only once. But his address, and the Islamic State’s countless other propaganda videos and encyclicals, are online, and the caliphate’s supporters have toiled mightily to make their project knowable. We can gather that their state rejects peace as a matter of principle; that it hungers for genocide; that its religious views make it constitutionally incapable of certain types of change, even if that change might ensure its survival; and that it considers itself a harbinger of—and headline player in—the imminent end of the world.

This is not a short read. But you will come away from it much, much better informed.
link to this extract

The dream life of driverless cars » The New York Times

All of the glares, reflections and misunderstood signs that [Illah] Nourbakhsh [professor of robotics at Carnegie Mellon University] warned about are exactly what [London design studio] ScanLAB now seeks to capture. Their goal, [32-year-old Matthew] Shaw said, is to explore ‘‘the peripheral vision of driverless vehicles,’’ or what he calls ‘‘the sideline stuff,’’ the overlooked edges of the city that autonomous cars and their unblinking scanners will ‘‘perpetually, accidentally see.’’ By deliberately disabling certain aspects of their scanner’s sensors, ScanLAB discovered that they could tweak the equipment into revealing its overlooked artistic potential. While a self- driving car would normally use corrective algorithms to account for things like long periods stuck in traffic, [William] Trossell and Shaw instead let those flaws accumulate. Moments of inadvertent information density become part of the resulting aesthetic.

The London that their work reveals is a landscape of aging monuments and ornate buildings, but also one haunted by duplications and digital ghosts. The city’s double- decker buses, scanned over and over again, become time- stretched into featureless mega- structures blocking whole streets at a time. Other buildings seem to repeat and stutter, a riot of Houses of Parliament jostling shoulder to shoulder with themselves in the distance. Workers setting out for a lunchtime stroll become spectral silhouettes popping up as aberrations on the edge of the image. Glass towers unravel into the sky like smoke. Trossell calls these ‘‘mad machine hallucinations,’’ as if he and Shaw had woken up some sort of Frankenstein’s monster asleep inside the automotive industry’s most advanced imaging technology.

Cross-device text and photo streaming was the undoing of Stefani’s cheatin’ heartthrob, when naked pictures of the nanny began popping up on the family iPad, US magazine uncovered this week. Like a lot of families, they evidently linked their mobile devices together – so a text or photo sent to one showed up on the others.

A lot of non-boldface names – many of them right here in switched-on Silicon Valley – have learned the same lesson the hard way. Apple customers frequently make their iCloud photo stream the default screen saver for Apple TV, transforming their selfies into 60in widescreen Ken Burns dissolves.

That’s what happened to Alex (who responded to a Facebook request for cringeworthy cases of cross-device photo streaming, but declined to give his last name). He took revealing pictures intended for his “certain someone,” then walked into the living room he shared with new roommates to find himself streaming in all his gaudy glory on the TV they were watching. “Let’s just say it made for some awkward dinner hours for a while,” he says.

“The future of TV is apps where you’ve definitely logged out first.” (Also, the Stefani case is just excruciating.)
link to this extract

With Google, Motorola, Xiaomi, and OnePlus pumping out high-end devices in the £200-350 range, pricing your Android phone at £560 is a boastful statement that you’ve made a kick-ass, no compromise device. The BlackBerry Priv can’t back up that kind of bragging, though, and that’s why it’s a failure. Other than the subpar keyboard and camera, everything on the Priv is merely passable. It’s a “C” student, but the price demands we grade on a curve that flunks the Priv.

His critique of the keyboard in particular is painstaking and murderous.
link to this extract

Martin Belam gave a talk to City University journalism students (lucky sods) and made five points. This is one of the subtler ones:

Treat every bit of content you publish to Facebook like an A/B test.
You post it to your page. If nobody interacts with it — by sharing or liking or commenting on it — it’s already failed. If the first few people to see it engage with it, then you have a chance that Facebook will show your content to more people.

So how can your piece pass that first test?

Ask yourself who is going to share that article, and why are they going to share it? If you can’t answer that question about your own story, you’ve done it wrong.

All worth considering (including the GIF one – which isn’t about how to pronounce it).
link to this extract

As PC sales have shrunk in recent years, the top four vendors have consolidated market share. They are Lenovo, HP Inc, Dell and Apple, [IDC PC analyst Tom] Mainelli said. So the two companies likely to bow out of the PC market probably will be in the lower half of the top 10, he said.

“The most likely scenario is that two will simply leave the market,” Mainelli said. “I don’t expect there to be many acquisitions as the (top four) don’t gain much from buying anybody in the bottom half of the list. There will likely be much discussion about possible mergers among the rest, but I’m not sure that this course of action will play out.”

Tongfang?
link to this extract

In response to IDC forecasts that two of the top-10 international PC vendors will withdraw from the global PC market over the next two years due to unbearable operating losses and the two are possibly Acer, Asustek Computer, Toshiba, Samsung Electronics, Tsinghua Tongfang, or Fujitsu, Acer founder Stan Shih said that Acer and Asustek will not die due to lower overheads compared to other vendors.

Acer achieved net profits of NT$191m (US$5.84m) and EPS of NT$0.06 for the third quarter and the results were a lot higher than those of the previous quarter mainly due to an exchange income of NT$799m.

Shih noted that Acer’s third-quarter profits were seriously impacted by competitors’ buy-two-get-one-free promotions and Acer also chose to focus on digesting inventory in the quarter, knowing it would gain profits from exchange rates.

I’d not be surprised if Toshiba and Fujitsu pulled out; they’re losing money. Samsung is a long way from profitable scale too, but has the advantage of making key components such as the displays.

This afternoon [12 November] a Mountain View Police Department traffic officer noticed traffic backing up behind a slow moving car traveling in the eastbound #3 lane on El Camino Real, near Rengstorff Ave. The car was traveling at 24 mph in a 35 mph zone. As the officer approached the slow moving car he realized it was a Google Autonomous Vehicle. The officer stopped the car and made contact with the operators to learn more about how the car was choosing speeds along certain roadways and to educate the operators about impeding traffic per 22400(a) of the California Vehicle Code. The Google self-driving cars operate under the Neighborhood Electric Vehicle Definition per 385.5 of the California Vehicle Code and can only be operated on roadways with speed limits at or under 35 mph. In this case, it was lawful for the car to be traveling on the street as El Camino Real is rated at 35 mph.

Just wanted to check the car wasn’t drunk, I guess.
link to this extract

A researcher at [security company] Quihoo 360 recently discovered an exploit in Chrome that can probably demolish even the newest, most up-to-date Android devices if the user visits an infected site.

The vulnerability was exposed at PacSec’s MobilePwn2Own event. What makes the exploit particularly unsettling is that it’s just one exploit, not an elaborate chain of exploits that interlink to reach an eventual compromise. Although the showcase did not go into the precise details regarding how the exploit works, it was revealed that it takes advantage of a vulnerability in JavaScript v8.

The researcher who discovered the exploit is Guang Gong, and PacSec will be rewarding Guang for uncovering and releasing the exploit by flying him to the CanSecWest security conference for a ski trip in March of 2016. In addition to this, Google will also likely pay a bounty for the bug’s discovery, as a Google security representative at the event took Guang’s work back for consideration.

Chrome will likely get fixed quickly, but is the vulnerability more widespread? Also, where are the stats about how those monthly security updates for Android going? Anyone know?
link to this extract

Errata, corrigenda and ai no corrida: none today.