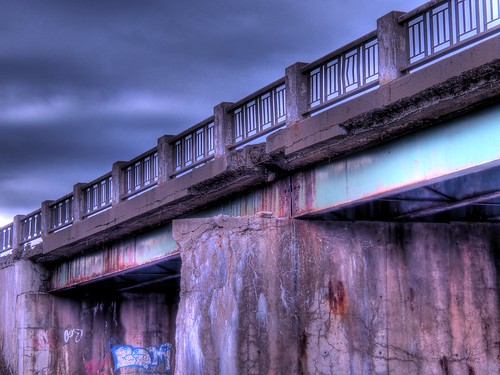 Upkeep of infrastructure probably matters more than inventing new things once you reach a certain level of complexity. Photo by BluePrince Architecture on Flickr.

As a result, for the last 14 years, every time MaxMind’s database has been queried about the location of an IP address in the United States it can’t identify, it has spit out the default location of a spot two hours away from the geographic center of the country. This happens a lot: 5,000 companies rely on MaxMind’s IP mapping information, and in all, there are now over 600 million IP addresses associated with that default coordinate. If any of those IP addresses are used by a scammer, or a computer thief, or a suicidal person contacting a help line, MaxMind’s database places them at the same spot: 38.0000,-97.0000.

Which happens to be in the front yard of Joyce Taylor’s house.

“The first call I got was [in 2011] from Connecticut,” Taylor told me by phone this week. “It was a man who was furious because his business internet was overwhelmed with emails. His customers couldn’t use their email. He said it was the fault of the address at the farm. That’s when I became aware that something was going on.”

Something indeed was going on. MaxMind says it’s the fault of the users of its database.
link to this extract

»A man in Oakland, California, disrupted web development around the world last week by deleting 11 lines of code.

The story of how 28-year-old Azer Koçulu briefly broke the internet shows how writing software for the web has become dependent on a patchwork of code that itself relies on the benevolence of fellow programmers. When that system breaks down, as it did last week, the consequences can be vast and unpredictable.

“I think I have the right of deleting all my stuff,” Koçulu wrote on March 20 in an email that was later made public.

And then he did it.

Koçulu had been publishing code he wrote to npm, a popular service that’s widely used to find and install open-source software written in JavaScript. It has become an essential tool in web development, invoked billions of times a month, thanks to npm’s ease of use and its enormous library of free code packages contributed by the open-source community.

Increasingly, very large structures are built on very small foundations whose solidity can’t be taken for granted. Talking of which…
link to this extract

Lee Vinsel and Andrew Russell, who are professors at the Stevens Institute of Technology in New Jersey:

»First, it is crucial to understand that technology is not innovation. Innovation is only a small piece of what happens with technology. This preoccupation with novelty is unfortunate because it fails to account for technologies in widespread use, and it obscures how many of the things around us are quite old. In his book, Shock of the Old (2007), the historian David Edgerton examines technology-in-use. He finds that common objects, like the electric fan and many parts of the automobile, have been virtually unchanged for a century or more. When we take this broader perspective, we can tell different stories with drastically different geographical, chronological, and sociological emphases. The stalest innovation stories focus on well-to-do white guys sitting in garages in a small region of California, but human beings in the Global South live with technologies too. Which ones? Where do they come from? How are they produced, used, repaired? Yes, novel objects preoccupy the privileged, and can generate huge profits. But the most remarkable tales of cunning, effort, and care that people direct toward technologies exist far beyond the same old anecdotes about invention and innovation.

Terrific and thought-provoking essay: in the light of smart home systems being turned off within 18 months of being released, what price maintenance?
link to this extract

»Exhibit A in the case for the high end is Huawei. A strong push for models such as the P8 meant that the average price of the Chinese company’s phones climbed 17% last year, according to IDC. Unit shipments jumped 45%, with the premium segment accounting for a significantly larger proportion of the total.

Apple’s average selling price rose more than 7% in calendar 2015, according to IDC data, with its shipment volume increasing 20%. The other major player to see gains from selling more-expensive phones was ZTE, with a 5.8% markup in price and a 20% jump in volumes. According to Counterpoint Research, the highest tier widened its share of total volume. So too did the bottom end, while the center got squeezed.

Given the gain for the cheapest models, it would be wrong to write off price cuts as a marketing strategy. Still, the price-demand dynamics for smartphones suggest that higher volumes driven by discounts may not translate to increased revenue (and will certainly squeeze profit per device). Whether you’re a Beijing-based startup or a Cupertino-based behemoth, the end-goal ought to be boosting sales and not market share.

The experience last year of Apple, Huawei and ZTE suggests that smartphones may in fact be a Giffen good – a product for which demand increases as prices rise.

Culpan also says that Samsung has seen a tripled demand for the S7 over the figures for the S6 last year, but I think that’s an error – Counterpoint says it’s up about 30%. What also isn’t revealed is what Huawei’s and ZTE’s ASPs were in 2014 or 2015. They might be up, but are they premium? Or is that effect principally from Apple’s bigger, pricier sales?

It’s certainly counterintuitive if premium really is booming. The graphic accompanying the article suggests it is, but it could just be Apple doing better while the rest sink.

»Believe it or not, we’ve actually had a “block user” feature in a basic form for quite a while, though over time its utility focused to apply to only private messages. We’ve recently updated its behavior to apply more broadly: you can now block users that reply to you in comment replies as well. Simply click the “Block User” button while viewing the reply in your inbox. From that point on, the profile of the blocked user, along with all their comments, posts, and messages, will then be completely removed from your view. You will no longer be alerted if they message you further. As before, the block is completely silent to the blocked user. Blocks can be viewed or removed on your preferences page here.

It’s a start (and also reinforces my hypothesis that all commenting systems evolve towards the functionality that Usenet already offered in 1996). But it doesn’t stop Reddit being something of a cesspit in other regards, as this New York Times article points out. (Though Usenet was like that too.)
link to this extract

»To your smartphone, an emoji is just like any other character (e.g., lower-case ‘a’, upper-case ‘B’) and needs to be rendered with a font. Since each smartphone platform (e.g., Apple, Google) has its own emoji font, the same emoji character can look quite different on different smartphone platforms. This is why when a Google Nexus owner sends [smiley emoji]  to a friend with an iPhone, the iPhone owner will actually see [slightly different smiley emoji] . This problem isn’t just limited to iPhones and Nexuses; check out all the different renderings of the single emoji character we’ve been discussing:

Read the full paper. May include emoji. (I always thought the Apple version of this one was a sort of “forced rictus grin of embarrassment”, so apologies to anyone who saw me use it and thought I was trying to transmit hilarity.)

How can we trust Google when it lets ads call the shots? » The Guardian

Kenny Jacobs, who is chief marketing officer of Ryanair:

»A friend of mine recently went on a first date and wanted to make a good impression. Having heard about a very reliable French place in central London that might be a romantic venue, he Googled it. At the top of the results page he found the restaurant’s website, clicked through to see pictures of happy looking couples, browsed the sample menu and used a booking form to reserve a table for two.

Date night came and when the taxi arrived at the address, the cabbie asked him which restaurant he was looking for: the one that had been there for years, or the new place across the road? Being sure he’d booked the original, the pair went into the restaurant, only to be told they had no reservation, and that they should have booked by phone.

Jacobs (and Ryanair) still hate eDreams, which buys AdWords ads against Ryanair searches and then leads those who click through to a site that looks suspiciously like Ryanair’s – except that it charges extra.

Should Ryanair sue eDreams? It already is doing. The problem is that by putting AdWords ads above organic search results, rather than to the side, Google encourages users to click the adverts. That’s in its own interests, but not all users can perceive the difference, which is then to the users’ disadvantage. Shouldn’t the user advantage win in that case? Online ads aren’t necessarily so easy to spot as on TV (where they’re not necessarily easy to spot either).
link to this extract

»A 42-year-old man from New Jersey recently showed up in an emergency ward following a seizure. After looking at the data collected by his Fitbit Charge HR, the doctors decided to reset his heart rate with an electrical cardioversion. It’s the first time in history that a fitness tracker was used in this way.

Won’t be the last, though. Full text in the Annals of Emergency Medicine.
link to this extract

RUN and RUN / lyrical school 【MV for Smartphone】 on Vimeo

RUN and RUN / lyrical school 【MV for Smartphone】 from RUNandRUN_lyrisch on Vimeo.

This music video has been going quietly viral in the west; it shows what an imaginative director can do by thinking about how a generation encounters music videos now – through the phone, not the TV. (You might want to watch it with the sound turned down low.)
link to this extract

»Long-lived spin coherence in proteins found in the eyes of migratory birds could explain how the creatures are able to navigate along the Earth’s magnetic field with extraordinary precision. This is the finding of researchers in the UK and Germany, who have created a new realistic model of cryptochrome proteins that is based on advanced simulations of nuclear and electron spins. The team also provides an explanation for how the avian magnetic compass has been optimized by evolution.

“Spin coherence” is the tight quantum pairing of electron spins. That birds have evolved the ability to lengthen it, and then harness it to navigate makes evolution all the more amazing. If you read it in a science fiction plotline you’d think they were overreaching a bit.
link to this extract

Errata, corrigenda and ai no corrida: none specified.