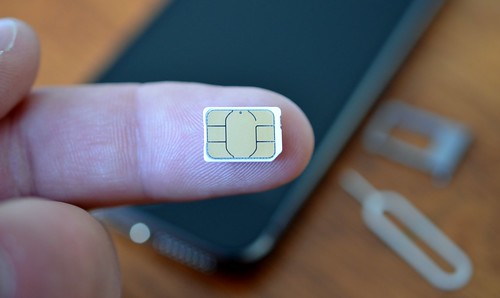 Small; soon invisibly so? Photo of a SIM card by smjbk on Flickr.

Morgan Housel, with the only article you need about innovation and people being dismissive of stuff on the basis of “I’d never want one”:

The typical path of how people respond to life-changing inventions is something like this:

This process can take years, or decades. It always looks like we haven’t innovated in 10 or 20 years because it takes 10 or 20 years to notice an innovation.

Planes, lasers, cars, antibiotics, laptops – they’ve all gone through it. What’s going through exactly the same now?
link to this extract

If a desktop computer and a smartphone are connecting to the same WiFi network, the network will recognize the unique ID in each device and pass that information to Drawbridge.

The guesswork gets more accurate the more frequently Drawbridge can capture instances of devices being in the same place or connecting to the same network. Drawbridge uses this cross-device matching system to build rich profiles of people’s behavior, interests, spending habits, demographic information, and sometimes their locations. They claim their matching software is more than 80% accurate.

Methods of tracking consumers online have drawn longstanding criticism from privacy advocates. The advertiser’s holy grail, of capturing every interaction a consumer has with their brand, also requires extensive surveillance of people’s behavior, and increasingly, their comings and goings. Privacy watchdogs say consumers do not want to be monitored in this way, and that the methods companies use to obtain consent to collect people’s data are broken.

Many apps ask for consumers’ permission to collect their location as a condition of downloading the app, but advocates warn that consumers are largely unaware of the extent of the information being collected or how it is being used. A recent study found that roughly 60% of consumers withdrew their consent when presented information about how their data was being shared.

Oh, come on. “Anonymous profiles using identification numbers”? Including, say, location, age, sex, marital status, interests, and so on? Quit the obfuscation; it’s profiling, of people, and Apple tries to limit its extent, and everyone else doesn’t.
link to this extract

A newly unsealed FBI search warrant application illustrates yet another example of how the government deploys malware and uses sophisticated exploits in an attempt to bust up child pornography rings.

The 28-page FBI affidavit (text-only, possibly NSFW) was unsealed in a federal court in Brooklyn, New York earlier this month. It describes a North Carolina server hosting a Tor hidden service site. The setup was seized in February 2015, but law enforcement allowed it to run for two additional weeks as a way to monitor its nearly 215,000 users.

Currently, at least three men—Peter Ferrell, Alex Schreiber, and James Paroline—have been charged in connection with this site.

Ferrell, username “plowden23,” is the target of the search warrant affidavit. Schreiber, 66, of Queens, was a former New York City schoolteacher. The two New York men have been released on bond.

“Questionable” malware in the sense that the legal rules about venue of infected PC are very hand-wavey; how do you know where a PC you’re infecting via Tor is based? By getting it to phone home (to the FBI). What if that’s out of venue? Ignore it?
link to this extract

Apple and Samsung are in advanced talks to join the rest of the telecoms industry to launch electronic Sim cards, in a move could fundamentally change how consumers sign up to mobile operators.

The GSMA, the industry association which represents mobile operators worldwide, is close to announcing an agreement to produce a standardised embedded Sim for consumer devices that would include the smartphone makers.

The traditional Sim card locks in the user to a network but an embedded Sim would enable a smartphone, tablet or wearable user to avoid locking themselves into a plan with a single operator or sign up to switch instantly.

Wouldn’t expect this in 2015, but next year would make perfect sense. And that’s another opening/point of failure removed from phones. I bet Apple is working on making the iPhone 7 “waterproof” – and perhaps at a dual-SIM model.
link to this extract

In the past, when farmers had smaller fields, they knew which areas had enough water, or were ready to harvest, just by walking around their land. However, to stay connected with today’s much bigger parcels of farm land, they need precision agriculture, with crop management that relies on GPS and big data analytics to increase yields and profits while cutting down on pesticide and water use.

Many tractors are now guided by GPS, to plant perfectly straight rows of crops. Farmers can monitor the progress of their driverless tractor on a tablet at home. Monsanto, the world’s largest seed company, estimates that data-driven prescriptive planting could increase global crop production by about $20bn a year, or about one-third the value of 2013’s US corn crop.

Drones are the latest addition in the toolkit of precision farming, collecting the key datasets used to make agronomic decisions. Right now, they are still new, and regulations how to use them vary from country to country. But farmers everywhere are waking up to the potential benefits, and “in a few years, drones could be a common sight above British farms,” says Alex Dinsdale, sales manager at Ursula Agriculture, a company that delivers crop intelligence from drones. But are they really useful, or just a technology gimmick?

“I remember driving the vineyards with my grandfather as a child, we would constantly stop, get out, and look at the vines. Right up close,” says Kunde. “He would take off a leaf and look at the undersides, show me, throw it down, then choose another.” At other times groups of men would use magnifying glasses to inspect the leaves, looking for potential pest problems in the vines. Fast-forward to today, and much of that work “could have been helped by advanced tools and aerial imagery,” he says.

The Hacking Team hack has spawned so many stories, but this by Violet Blue pulls together some of the worst behaviour uncovered. Such as:

Ethiopia’s Information Network Security Agency (INSA) was employing Hacking Team to target [security researcher, The Intercept journalist, First Look Media director of security and former Google employee Morgan] Marquis-Boire, likely over his tracking of the company’s malware for Citizen Lab and at Google’s anti-malware team – one which culminated in a particularly bad PR moment for Ethiopia.

Yet PhineasFisher’s haul shows Hacking Team not only provided its products to Ethiopia, but also proposed a new contract with Ethiopia because, according to a leaked email from operations chief Daniele Milan, “700K is a relevant sum.”

Samsung’s smartphone market share falls to 21.5% from 28% in India in June quarter | ETtech

Samsung’s smartphone market share fell to 21.5% from 28% in the previous quarter, the report [by tracking firm Cybex Exim Solutions] said. The company, however, still leads the overall handset market in the country with 18.9% share.

Home-bred handset maker Micromax is going steady at the No.2 position, with 12.6% share of the overall mobile phone market in the quarter to June, up from 10% in the previous quarter. In the smartphone segment, Micromax’s market share rose to 17.9% from 13%.

The Indian smartphone market grew by 23.5% sequentially to reach 25m units (according to Cybex). If you do the maths, that means Samsung’s smartphone sales did actually fall, from 5.7m to 5.4m, while Micromax’s rose from 2.6m to 4.5m. Samsung has a problem: it’s being out-competed at the low end.
link to this extract

The Department of the Navy (DON) has sent a notice to more than 436,000 active duty personnel and reservists, as well as over 195,000 civilian employees, warning that data compromised in the recent breach at the Office of Personnel Management (OPM) also included fingerprint records.

“The interagency team has now concluded with high confidence that sensitive information, including the Social Security Numbers (SSNs) of 21.5 million individuals, was stolen from the background investigation databases,” said Thomas W. Hicks in performing the duties of the Under Secretary of the Navy.

Please update your fingerprints accordingly, using at least one whorl and two loops. (Though seriously, how can they be abused? Unless you’re going to whirl off into a plot involving a top-flight general using an iPhone with TouchID.)
link to this extract

In praise of Apple Music in my iTunes Library » Six Colors

I don’t know what I was expecting from Apple Music integration. I guess I assumed that when I added a track to “my library” from Apple Music, it would go to some special Apple Music tab, or playlist, or library. Nope—that music just shows up in the My Music section of iTunes, mixed in with all of the stuff I’ve bought over the years.

I realize that this approach may not work for everyone—one of the great challenges in designing any computer-based music service is going to be the endlessly different ways people consume to music—but boy, does it work for me. I play music from a lot of self-built playlists, but now I can add Apple Music playlists too, and they’re seamlessly integrated. Apple Music’s integration with my music library lets me listen to music in the same way I’ve been doing it for the past 14 years—but with the addition of tracks from Apple Music’s nigh-endless supply.

I can also see just how insidious this approach is. My music library is no longer pristine, no longer a collection owned by me. Now I’m acquiring albums and tracks not by buying them, but by clicking that Add to Library button. It’s already started to happen, after a couple of weeks. After a few months or years with this service, how will I ever be able to cancel it?

There are roughly 800m iTunes accounts, growing at about half a million per day in 2013.
link to this extract