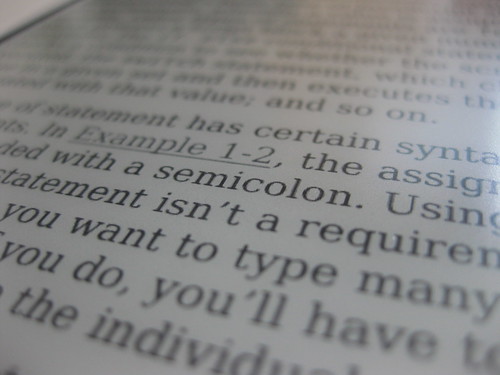 “The words are too wordy, and the sentences too sentient.” Review photo by Andrew Mason on Flickr.

A selection of 9 links for you. And look, it’s November already. I’m charlesarthur on Twitter. Observations and links welcome.

In search of fact checking’s ‘Holy Grail’: News outlets might not get there alone » Medium

The authors [of a scientific paper published at Columbia University] write that ClaimBuster represents one piece of what could eventually be a fully automated fact-checking system. They call this the “Holy Grail” of fact-checking, while also acknowledging that an automated system is a complex an far-off goal.

“A fully automated fact-checker calls for fundamental breakthroughs in multiple fronts and, eventually, it represents a form of Artificial Intelligence (AI),” they write in the paper.

Along with being able to automatically identify checkable claims in real-time, the “Holy Grail” system would need to be able to compare the claims to a database of accurate and up-to-date checked facts that is comprehensive enough to check a wide range of claims. In a perfect scenario, the claim and the corresponding checked fact would be compared and the system would render an accurate verdict within a few seconds of the statement being made.

We may never get there. But ClaimBuster on its own could prove useful for verification and debunking.

Reviewers have long used Amazon as a platform to vent about products that failed to live up to their expectations. Some have even used it to attack authors whose views differ from their own.

Increasingly, though, people are launching coordinated campaigns to push political and social agendas through negative reviews often only tangentially related to the product for sale. They are able to do so because Amazon welcomes reviews regardless of whether the writer has actually purchased the product.

[The author of a book about Sandy Hook, Scarlett] Lewis isn’t the only target of the Sandy Hook tragedy deniers. “We want to hit this woman as hard as we can,” says a narrator in a YouTube video as he walks viewers through posting 1-star ratings and negative reviews for “Choosing Hope: Moving Forward from Life’s Darkest Hours,” by Sandy Hook Elementary first-grade teacher Kaitlin Roig-DeBellis. The video, posted by “Peekay22,” even guides viewers to click a “Yes” button indicating they found other negative reviews helpful.

“Amazon is giving these people a forum … ,” Lewis said. “Obviously, Amazon should remove (the reviews).”

But Amazon appears to have no intent of doing so. To the company, as long as the reviews are “authentic,” they have a place on its website.

“All authentic reviews, whether the reviewer bought the product on Amazon or not, are valuable to customers, helping them make informed buying decisions every day,” Amazon spokesman Tom Cook wrote in reply to questions about its review policy.

What about “whether they bought the product or not”?
link to this extract

Too much of a bad thing » Jay Pinho

Pinho asks why the NY Times is going to have people dedicated to doing rapid rewrites of already-viral stories, and then looks more broadly at what’s happening to journalism:

Very few, if any, sites have managed to support a substantial journalistic operation via digital ad revenues alone. This leaves us with two distinct models: large, legacy organizations with complementary revenue sources (subscriptions for newspapers or TV advertising for major news channels) on the one hand, and aggregators relying purely on online ad revenue on the other. (There are also niche sites produced as works of love, business models be damned.)

Both adblocking and the possibility of an eventual contraction of available VC money threaten to severely damage the latter business model. They certainly won’t damage advertisers, at least not significantly: they’re going to find a way to spend their budgets one way or another. But, and this should be clear by this point, they also won’t necessarily damage journalism. At the Times, for example, the CEO and executive editor are clearly focusing on building out subscribers, not simply inflating their page views…

…High-quality content producers, in other words, are reasonably confident that they can continue to extract monetary value from their readers even if and when the advertising landscape shifts dramatically. If, however, you’re a ViralNova, EliteDaily, Upworthy, Huffington Post, or another outfit with similarly vanishing per-article revenues, you’ve got to be worried. And you should be, because much of your content is terrible.

But that doesn’t mean any of us should be overly concerned if some of these businesses begin to go under. If anything, the eventual constriction of ad inventory supply could help return CPMs to financially sustainable levels.

The devastating effect of adblockers for Guru3D.com » Guru3D.com

There is however a huge discrepancy in Google analytics / DFP. Where a year ago we served 375~400K pageviews per day, we now register just over 200K pageviews a day. That’s right, nearly 50% of the readers are blocking ads.

After some further investigation, the direct effect of the ongoing trend of adblockers is resulting into halving our revenues / registered pageviews.  Over the past year we have seen our income literally halfed as a direct result of active adblocking. Everybody can understand that long term this is not sustainable anymore, right now adblockers are a true danger for our existence.

There are 28 pages of comments. Some are really not happy with how links were turned into pop-up overlay ads if they don’t adblock. Tragedy of the commons, again. But the donations seem to have rolled in.
link to this extract

Quentin Hardy on the split, that by the time you read this will have happened:

Ms. Whitman, who will run HPE, made certain throughout the transition that her company would most assuredly still be able to ship computers.

“We have to ship products, we have to send invoices, we have to collect money,” she said. “HP sells two PCs a second. A server every six seconds. We had to keep selling them.”

The change cannot come fast enough for HP, whose stock is off more than 30 percent since the start of the year. The question is whether Wall Street believes the two companies will benefit from the separation.

“Anytime you make a change, you make a claim,” said Toni Sacconaghi, an analyst with Sanford C. Bernstein. “They say, ‘We’re on the front edge, everyone will have to catch up to us.’ But both new companies aren’t that wildly different. They’re both growth-challenged.”

HP, the printers-and-PCs company, is very definitely “growth-challenged”. Both markets it operates in are struggling.
link to this extract

HTC is expected to see its revenues grow 20-30% sequentially to NT$25-28bn in the fourth quarter of 2015, buoyed by the launch of new models including the HTC One A9, HTC Butterfly 3 and HTC Desire 729 dual-SIM, according to an estimate of industry sources.

Despite increased sales in the fourth quarter, analysts are still conservative about HTC’s earning prospects and expect its earnings for the quarter to stay flat or increase marginally from the previous quarter. HTC posted a net loss of NT$4.48bn or NT$5.41 per share in the third quarter.

Hilariously, HTC refused to give guidance for this quarter at its earnings call. Equally hilariously, Taiwan-based Digitimes never points out the uncomfortable reality about Taiwan-based HTC: even a 30% sequential rise in quarterly revenues would equate to a fall of more than 40% year-on-year, and likely another hefty loss.
link to this extract

what we’ve grown to accept in our personal computers [in the form of software crashes and bugs] can’t be allowed in a vehicle carrying human beings at 60 miles per hour.

Just because the software running inside Apple’s personal computing devices is considered high quality doesn’t mean that the culture that produces it is capable of producing the high-reliability, real-time embedded software needed for an electric car.

I am one of the many who believe culture always wins. Culture eats strategy for breakfast, it causes mergers and acquisitions to fail and, above all, it resists virile executive calls to change. Culture evolves slowly, as if having its own independent will, or not at all.

The bottom line is this: For the hypothetical Apple Car project to succeed, a necessary (but not sufficient) condition is a culture change of a kind rarely, if ever, achieved by large organizations.
Perhaps the new software culture could arise in a new, separate group, well protected against the corporate lymphocytes always prone to attack what they see foreign objects. But that would break Apple in two separate cultures, and be the beginning of a dangerous process for a company that, today, strives on having a united functional organization.

New research from the University of Michigan’s Transportation Research Institute indicates that self-driving cars are more frequently involved in accidents than conventional vehicles. For every million miles driven, autonomous cars had an average of 9.1 crashes, compared to 4.1 for conventional vehicles according to data for Google, Delphi, and Audi autonomous vehicles between 2012 and 2015 and the total accident rate of conventional human-piloted vehicles in 2013.​

However, this data amounts to 11 total crashes for self-driving cars. All of these involved Google vehicles (which have been undergoing testing for much longer) but most importantly, the self-driving cars were not at fault in any of the accidents.

I expect this to continue to be the case: human drivers are going to be worse in all but the most extreme, remarkable cases.
link to this extract

Like Google and other big tech companies, Apple asks both technical questions based on your past work experience and some mind-boggling puzzles.

We combed through recent posts on Glassdoor to find some of the toughest interview questions candidates have been asked.

Some require solving tricky math problems, while others are simple but vague enough to keep you on your toes.

Great way to find out if you’re actually awake this Monday.
link to this extract