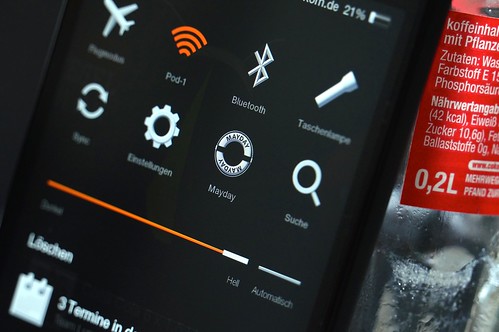 The Mayday button on the Amazon Fire Phone. Perhaps should have been used before it went on sale. Photo by TechStage on Flickr.

A selection of 8 links for you. Do not use as a flotation device. I’m charlesarthur on Twitter. Observations and links welcome.

Austin Carr, in a terrific long read, explaining how the Fire Phone project began in 2010, and had Bezos as a micro-manager:

Some designers bristled at Bezos’s presence and privately questioned his taste, while others who were wowed by his wide-ranging insights loved his approach. Regardless, Bezos’s heavy hand certainly took getting used to, even for Chris Green, Lab126’s VP of industrial design. “In the beginning, Chris would take Jeff’s feedback a bit literally,” says Randall, the former Lab126 VP, “and there was many an evening spent over beers and sushi counseling him, saying, ‘Calm down, it’s going to get better.’”

Bezos drove the team hard on one particular feature: Dynamic Perspective, the 3-D effects engine that is perhaps most representative of what went wrong with the Fire Phone. Dynamic Perspective presented the team with a challenge: Create a 3-D display that requires no glasses and is visible from multiple angles. The key would be facial recognition, which would allow the phone’s cameras to track a user’s gaze and adjust the 3-D effect accordingly. After a first set of leaders assigned to the project failed to deliver, their replacements went on a hiring spree. One team even set up a room that they essentially turned into a costume store, filling it with wigs, sunglasses, fake moustaches, and earrings that they donned for the cameras in order to improve facial recognition. “I want this feature,” Bezos said, telling the team he didn’t care how long it took or how much it cost.

Turns out Bezos isn’t as good a micro-manager for building a phone as Steve Jobs. Result:

According to three sources familiar with the company’s numbers, the Fire Phone sold just tens of thousands of units in the weeks that preceded the company’s radical price cuts.

The whole piece, though, gives terrific insight into how Bezos can get it wrong. He thought a single phone – one piece of hardware – could reshape Amazon’s brand, and turn it from a “get stuff cheap online” one, into a “we customers love you, take our money” brand. The two aren’t the same.

February 2014: What the world really needs: A telescopic SELFIE STICK » The Register

Mobile World Congress is often as interesting for the silly gadgets as it is for the mainstream announcements.

This (right) is the Selfie Stick, an extendable pole with a Bluetooth control for your phone.

The Selfie comes in two versions: a general one and one for Samsung phones where you have focus control.

The first wearable camera that can fly » Nixie

The first wrist-band camera quadcopter.
Nixie flies, takes your photo, and comes back to you.

This feels like it could easily be one of those Great Ideas that is too easily bungled in the execution, but if it works well it could put selfie sticks out of business. Until selfie stick owners swat them out of the sky.

CES, the World’s Largest Trade Show, Is Too Big for Vegas » Bloomberg

The Consumer Electronics Show in Las Vegas has a problem that many events would love to have: It’s become too big. And it doesn’t want to get any bigger.

With as many as 160,000 visitors to CES—the world’s largest annual trade show—the Nevada city’s sprawling hotels are stretched to the limit. Last January’s gathering of gadget-loving geeks somehow packed in a full 10,000 more people than Las Vegas has rooms for them to sleep in.

The Consumer Electronics Association, the folks who put on the conference and expo, says CES 2015 will have the equivalent of 35 football fields, or about 2 miles of floor space, filled with phones, televisions, smartwatches, washing machines and throngs of people trying to see it all. “In order to enhance the experience for our attendees, we aim to keep attendance between 150,000 and 160,000 so that everyone can get where they need to go,” says CEA Vice President Karen Chupka.

That’s OK – they can sleep in the lines for press conferences showing off LG’s new dishwasher. Actually, the graph with the story suggests that attendees has exceeded the number of available hotel rooms since 2012. I’m pretty sure I slept there in 2012. Could it be that, shock, some people share rooms? Also, how’s AirBnB coming along there? And might some attendees, um, live in Vegas?

The weirdly-synched life of the Google Nest household » The Register

At first glance it looks like the typical Utopian vision of Silicon Valley, but Vulture South took a second look and asked ourselves: “what kinds of life does Google think we live?”

The short answer: wealthy, lazy, and either lonely or in a strange 1950’s-sitcom family synchronisation. Everybody rises and sleeps at the same time, everybody leaves and arrives together, and we’re rich enough to have ‘leccy cars but too poor to charge them.

The most obvious believer in the synchronised family is appliance giant Whirlpool. Its Nest integration can “let your washer and dryer know when you’re home and they will automatically switch to quiet mode”. Unless only one occupant is recognised, that means the only time the appliances are allowed to let their hair down and party is when everyone’s away.

The August Smart Lock will tell Nest to change your thermostat settings when you arrive (warm the house up) or leave (switch off the heating) – which begs the question “what if I lock the front door while other people are still at home?” At least the Kwikset Kevo smart lock understands that more than one person might be in a household.

The Withings Sleep System: when you go to sleep it will “let your Nest Thermostat to a comfortable nighttime temperature. Wake up and it will tell Nest you’re ready to start the day.” Once again, the idea that a household might have sleep and wake times staggered by hours seems alien to the developer.

This is my general objection to “internet of things” and “homes of the future” visions: they don’t account for how we actually live. Them: Look, you’ll be able to get your coffee maker to make coffee before you get out of bed! Me: so I’ll have had to put the coffee in the night before. As I have to go downstairs to get the coffee, why not just make it fresh while I’m there?

And so on. Most IOT/HOTF concepts seem to come from 20-somethings who have no concept of running a household. Hence, I think, their limited success.

Michael Ballaban, who unearthed this Holy Grail-style rumoured-but-until-now-never-confirmed video, which has the notice:

“HFR till end of the world confirmed.”

Hold for release. CNN, once ever so thorough in its factchecking, knew that the last employee alive couldn’t be trusted to make a call as consequential as one from the Book of Revelation. The end of the world must be confirmed.

That leaves open a whole host of unanswered questions. If this is the last CNN employee alive, in the last CNN bureau on Earth, who do they confirm it with? What does confirmation look like? Who can be the one to make that determination, to pronounce the universe itself dead? Is it Wolf Blitzer himself, ever a fan of the Washington Wizards, and thus a man who would know death when he saw it? Would it be Rick Davis, CNN’s head of standards of practices, who has been with the company since its birth and who thus would know CNN’s journalistic practices better than anyone?

Or would it be some sort of living embodiment of CNN itself, ready to proclaim its own demise, as Judgment Day is truly the only thing able to bring about the long-anticipated death of cable news?

And who would be around to watch it?

Um.. that CNN employee? The machines grinding us into nanoparticles to feed into their hoppers? Take your pick.

the bank traced the breach to a financial adviser working out of its New York offices, a 30-year-old named Galen Marsh, according to a person involved in the investigation who spoke on the condition of anonymity.

Mr. Marsh, who had been with Morgan Stanley since 2008, was quickly fired and is currently the subject of a criminal investigation by the Federal Bureau of Investigation, a person briefed on the investigation said. The Financial Industry Regulatory Authority is also examining the matter.

Morgan Stanley said on Monday that it had determined that Mr. Marsh took data on about 10% of its 3.5 million wealth management customers, including transactional information from customer statements.

The bank said that Mr. Marsh did not take any sensitive passwords or Social Security numbers, and that it had not found any evidence that the breach resulted in any losses to customers. A lawyer for Mr. Marsh, Robert C. Gottlieb, acknowledged on Monday that his client did take the information in question but said that he did not post it online, share it or try to sell it.

Hit mobile game Monument Valley and piracy: ‘Only 5%’ of Android players paid for it » VenureBeat

Piracy is still a big problem on Android.

Developer Ustwo had one of the break out mobile hits in 2014 with its isometric puzzler Monument Valley, but a successful game is not impervious to piracy. The studio confirmed on Twitter today that Monument Valley has had an especially tough time with “unpaid installs” on Android. The company said that 95% of the people playing the game on Google’s mobile operating system did not buy it — although, Ustwo did explain that a small number of those installs are legitimate and were not illegally downloaded. This makes a big dent in Ustwo’s earnings since Monument Valley is a premium-priced game that does not have in-app purchases like Candy Crush Saga or other lucrative mobile releases. Gaming on smart devices surpassed $21bn last year, but it potentially could have more if it weren’t for piracy.

The paid rate was much better on iOS, but it’s still alarming. Ustwo said that 40% of the people who have the game on an Apple mobile device paid for it. Again, that means the majority did not give the developer money.

Depressing numbers, for a game that costs just $4. There’s certainly piracy on iOS – but the astronomical amount on Android really isn’t good news. Does this get factored into the quotes about “revenues from app stores” we see?

There is some confusion over the iOS figure though: it’s not clear whether someone who buys on the iPhone and then downloads to their iPad counts as an “unpaid install”. We also don’t know if that’s how it works on Android – though do 95% of Android owners have multiple devices?