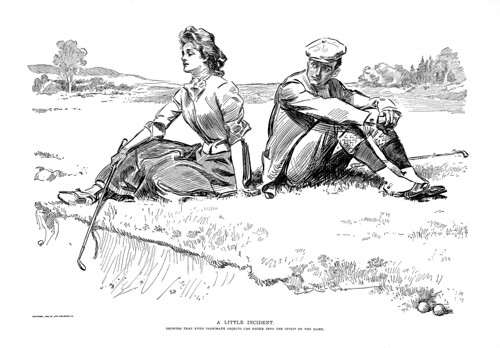 Suggested caption: “I wish I’d never mentioned the bloody sealion”. Can a computer do better? Picture from MCAD Library on Flickr.

Google makes it official: Chrome will freeze Flash ads on sight from Sept 1 » The Register

Back in June, Google warned that, in cooperation with Adobe, it would change the way Flash material is shown on websites.

As we explained a couple of months ago, it’s effectively taking Chrome’s “Detect and run important plugin content” feature, and making it the default: only the “main plugin content on websites” will be run automatically. That should put a stop to irritating ads around the sides of pages.

Google’s reasoning for the move is largely performance-based, apparently. The Chocolate Factory worries that with too many pieces of Flash content running at once, Chrome’s performance is hamstrung, and, more critically, battery life is drained in notebooks and tablets running the Flash plugin.

A performance and battery hit? From Flash? I’m shocked, shocked to hear of such a thing.
link to this extract

Remember the Google Ads blogpost from last week explaining how developers could enable non-HTTPS ads to show on iOS 9, which enforces (almost) HTTPS? The discussion on Hacker News include some who’ve been in the trenches:

At my last job, we did something similar to what iOS 9 is now doing, where we migrated a survey engine to serve all forms over https. There was high fiving and champagne all around the engineers desks, while media was freaking out that their impressions took the sharpest reverse-hockey-stick in the world. Ad networks are seriously the worst when it comes to https traffic. Given the dozens of redirects and pixel injections and iframes slapped into a media page, it’s nearly impossible to serve secure traffic since it only takes one network to downgrade the https request to http and then the page is “broken”.

Other comments provide useful insight too.
link to this extract

Other projects and software features are likely in the works [from Oculus Rift] as well. (We may know more at the Oculus Connect 2 developer conference in Los Angeles next month.)

All of which makes HTC’s decision to delay the Vive’s consumer release rather risky—especially if the company is relying on this initiative to make up for its flagging smartphone business. For end users and developers, however, the scenario points to something else: Next year is going to be absolutely huge for all realities virtual.

Can HTC hang on long enough to ride that wave? Testers say it’s terrific quality. Most valuable asset?
link to this extract

In terms of the sheer numbers of devices sold, however, Microsoft remained in the lead. In 2014, about 4.9m Windows devices, including notebooks and desktops, shipped to schools, giving Microsoft a roughly 38% market share in unit sales, IDC said.

Apple, meanwhile, shipped about 4.2m devices for schools, including desktops, notebook computers and tablets, accounting for about 32% of the education market, according to the report.

But the Chromebook category is fast gaining traction in the United States.

Last year, about 3.9m Chromebooks were shipped in the education sector, an increase in unit sales of more than 310% compared with the previous year, IDC said. By contrast, iPad unit sales for education fell last year to 2.7m devices, compared to 2.9m in 2013, according to IDC data.

“Even if Microsoft is No. 1 in volume and Apple is No. 1 in revenue, from the growth perspective, nobody can beat Chromebook,” said Rajani Singh, a senior research analyst at IDC who tracks the personal computer market and is the author of the report.

In the first half of this year, she said, roughly 2.4m Chromebooks shipped to schools compared with about 2.2m Windows-based desktops and notebook computers.

Maybe this is where Chromebooks begin to eat away at Windows. They certainly should be a lot easier to secure and manage.
link to this extract

Each week The New Yorker runs a cartoon contest on its back page, where the publication invites readers to submit captions to cartoons drawn by the magazine’s illustrators. Winning the contest is notoriously difficult — writers have to generate a quip that’s funny, but also perfectly mimics the magazine’s sensibilities. A deep knowledge of The New Yorker is a prerequisite. Or is it?

We’ve collected all the first, second, and third place winning entries going back to when the magazine introduced the competition in 2005 — all 1,425 of them. Then, we ran them through a Markov text generator program that analyzes the winning captions and generates new, randomized entries that echo the original set.

Observation: using this won’t even get you to the last three in the caption contest. Maybe when the robots have taken all the other jobs, “comedian” will still remain for humans.
link to this extract

Even without considering the entirely intentional complexity of details such as minimas, floors and ceilings, the underlying principle is simple: a record label secures a fixed level of revenue regardless, while a music service assumes a fixed level of cost regardless.

Labels call this covering their risk and argue that it ensures that the services that get licensed are committed to being a success. Which is a sound and reasonable position in principle, except that in practice it often results in the exact opposite by transferring all of the risk to the music service. Saddling the service with so much up front debt increases the chance it will fail by ensuring large portions (sometimes the majority) of available working capital is spent on rights, not on building great product or marketing to consumers.

None of this matters too much if you are a successful service or a big tech company (both of which have lots of working capital). Both Google and Apple are rumoured to have paid advances in the region of $1 billion. While the payments are much smaller for most music services, Apple, with its $183bn in revenues and $194bn in cash reserves can afford $1bn a lot more easily than a pre-revenue start up with $1m in investment can afford $250,000.  Similarly a pre-revenue, pre-product start up is more likely to launch late and miss its targets but will still be on the hook for the minimum revenue guarantees (MRG).

It is abundantly clear that this model skews the market towards big players and to tech companies that simply want to use music as a tool for helping sell their core products.

Microsoft can tell Google exactly what happens next; indeed, Google’s lawyers realize there will be other antitrust investigations. One, concerning the Android operating system and its links to Google services, is already in the works, although no official charges have been brought. Another may soon hit Google where it really hurts, challenging its dominance in online advertising. Google will fight and probably lose, because Europe doesn’t like big U.S. companies to dominate its markets.

Lobbying and complying with whatever demands still can’t be avoided is a less painful path. Microsoft spent 4.5 million euros last year, a million more than Google, on efforts to get EU officials to see its points on issues such as data protection and cloud computing. Among other things, the European Parliament is now considering a Microsoft proposal that would cap fines for Internet privacy violations at 2m euros a case, instead of 2% of a company’s international turnover.

It’s admirable that Google now wants to fight for its principles and against the dilution of its superior offering. It makes me cringe, however, to think of the time and money that will be burned in this hopeless battle.

The fembots of Ashley Madison » Gizmodo

In the data dump of Ashley Madison’s internal emails, I found ample evidence that the company was actively paying people to create fake profiles. Sometimes they outsourced to companies who build fake profiles, like the ones Caitlin Dewey wrote about this week in the Washington Post. But many appear to have been generated by people working for Ashley Madison. The company even had a shorthand for these fake profiles—“angels.” Perhaps this is a tip of the hat to Victoria’s Secret models, also known as angels.

Ashley Madison created their angels all over the world, and the dump contains dozens of emails where Avid Life Media management arranged to generate more. Here you can see a July 4, 2013 email from Avid Life Media’s director of internal operations, Nora Abtan, to CEO Noel Biderman and other managers, with the subject “summary angels status”…

…An email chain between Sandra Simpson and an employee named Eduardo Borges, dated July 30, 2012, suggests that quality control on the angel profiles was actually pretty rigorous. Borges asks whether it’s OK to reuse photos if they are in different states, and Simpson says no—she notes that many members travel and they might spot the duplicates.

Such great journalism; such a scammy business. The question becomes, did the company take this direction from the start, or was it forced towards fakery by circumstance?
link to this extract

Apple is about to lay down its TV cards » TechCrunch

It stands to reason that Apple will be able to push the A8 much, much further than it ever has before given that the Apple TV is plugged into the wall, and not dependent on battery.

This will enable developers of games and other resource-intensive applications to produce higher quality and more demanding apps. Among the demos I’d expect to see on stage next month are content apps, games, and broadcast companies. These apps fit the venue (fixed, but large and participatory) and purpose of your television — and the apps that people will build for the Apple TV would do well to take those factors into account as well.

A native SDK that takes advantage of the hardware fully will, for the first time ever, turn the Apple TV into a platform, a self-sustaining life form that Apple likely hopes will dominate competitors who have done only slightly better about adding third-party support.

To control the new Apple TV? A new remote. One major feature of which was pretty much nailed by Brian Chen in an article earlier this year. It’s slightly bigger and thicker, with physical buttons on the bottom half, a Touchpad area at the top and a Siri microphone.

I thought the Apple TV would get its own SDK
back in 2012. Totally wrong; it just wasn’t ready.
link to this extract