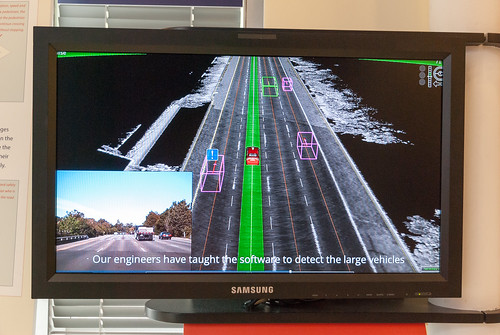 What the Google self-driving car “sees”. Photo by Matt Chan on Flickr.

A selection of 10 links for you. Don’t worry, be happy.

one of Google’s most strategic acquisitions has mysteriously been actively blocked from public view. An investigation by IEEE Spectrum has uncovered the surprising fact that Google’s innovative self-driving car and the revolutionary Street View camera technology that preceded it were largely built by 510 Systems, a tiny start-up in Berkeley, California.

If you’ve never heard of 510 Systems, that’s exactly the way Google wants it. The purchase of 510 Systems and its sister company, Anthony’s Robots, in the fall of 2011 was never publicly announced. In fact, Google went so far as to insist that some 510 employees sign agreements not to discuss that the acquisition had even occurred. Google’s official history of its self-driving car project does not mention the firm at all. It emphasizes the leadership of Sebastian Thrun, the German computer scientist whose Stanford team won the autonomous-driving Grand Challenge in 2005, sponsored by the Defense Advanced Research Projects Agency (DARPA).

Why has Google worked so hard to keep this one acquisition a secret?

Harris has been doing fantastic digging into the truth about this Google project.

What do you do when you’ve been outed as a fraud and your Kickstarter was pulled? You go to Indiegogo, of course. Anonabox was a $45 device that promised to route your home’s internet connection through (privacy-focused network) Tor without any fiddling in the same way that PORTAL works. In the current climate, it was no surprise to see the project earn $600,000 in pledges in just the first few days. Slowly, however, people began to ask questions about creator August Germar after the hardware was found to be an off-the-shelf unit made by a Chinese OEM and the software turned out to be about as secure as a slice of Emmental.

Now the project has been re-born on Indiegogo, with claims that the mistakes of the previous project (and subsequent outcry) has helped the device get better. That’d be fine, and we’d be applauding Germar’s efforts, except for the fact that his claims of involvement with the Tor community have already been debunked. When ITSecurityGuru asked former Tor lead Runa Sandvik, she said that Germar “is making false claims, again.”

Some serious questions to be asked about Indiegogo here.

Smart Vision Labs, a start-up in New York City, wants to make it easier to diagnose vision problems in developing countries with an iPhone camera add-on.

The World Health Organization estimates that 246 million people have poor vision. Of these, about 90% live in low-income areas without good access to healthcare or expensive diagnostic machines.

To solve this problem Smart Vision Labs has combined two tools often used for eye tests into a single inexpensive and portable device. The first tool, an autorefractor, calculates whether someone is short-sighted or long-sighted, and to what extent, by measuring the size and shape of their eye. The second, an aberrometer, looks for distortions in how light reflects off the eye, which could indicate rarer problems such as double vision.

Android phones would be a lot cheaper to do it with.

The real reason Excite turned down buying Google for $750,000 in 1999 >> Internet History Podcast

George Bell was chief executive of Excite, which was one of the biggest web properties. A bake-off didn’t find much difference between Excite’s search at the time, and Google’s. But he might have done the deal. However:

Ultimately, Larry said, “Look, I like the engineers at Excite. I really like the company. I get that you don’t see a lot of difference.” And, I think we struck a price. I believe that the price was $750,000 in cash, and something like 1% of Excite. The economics of that were really ok to us. The thing that Larry insisted on that we all do recall, is that Larry said, “If we come to work for Excite, you need to rip out all the Excite technology and replace it with Google’s search.” And, ultimately, that’s, in my recollection, where the deal fell apart. Because, we had hundreds of engineers at that point, and culturally, we really were driven by technology. And I didn’t think we could survive… or the differentiation in search results were clearly not dramatic enough to justify the cultural risk that Larry would insist on. So, ultimately, we passed.

There also have been missteps at Samsung. The mobile division, under Mr. Shin, didn’t seriously question bullish projections for orders of its flagship smartphone, the Galaxy S5, which went on sale globally in April, according to a person familiar with the matter.

Samsung produced about 20% more devices than it did of the Galaxy S5’s predecessor, basing the numbers on a survey of its carrier partners around the world, who were asked to predict demand but who weren’t on the hook for any unsold devices, according to the person. That led to merchandise piling up in warehouses, forcing Samsung to increase marketing expenditures to unload the devices.

In all, Samsung sold about 40% fewer Galaxy S5 smartphones than expected, with about 12m units sold to consumers in the first three months since April compared with about 16m units for the preceding flagship phone, the Galaxy S4, according to people familiar with the matter. Only in one major market did Samsung sell more Galaxy S5 smartphones than it did the S4: the US, Samsung’s biggest market, one of these people said.

Making the point that Samsung’s real customers aren’t end-users, but carriers. S5 sales in China were down by about 50% compared to the S4 in its first six months.

Like many hyperscale datacenter operators, Amazon started out buying servers from the big tier one server makers, and eventually became the top buyer of machines from Rackable Systems (now part of SGI). But over time, like Google, Facebook, Baidu, and its peers, the company decided to engineer its own systems to tune them precisely for its own workloads and, importantly, to mesh hand-in-glove with its datacenters and their power and cooling systems. The datacenters have evolved over time, and the systems have along with them in lockstep.

In the past, Amazon has wanted to hint at the scale of its infrastructure without being terribly specific, and so they came up with this metric. Every day, AWS installs enough server infrastructure to host the entire Amazon e-tailing business from back in 2004, when Amazon the retailer was one-tenth its current size at $7bn in annual revenue.

“What has changed in the last year,” Hamilton asked rhetorically, and then quipped: “We have done it 365 more times.”

That is another way of saying that in the past year AWS has added enough capacity to support a $2.55 trillion online retailing operation, should one ever be allowed to exist.

According to a fresh report from prominent KGI analyst Ming-Chi Kuo obtained by AppleInsider, quarter-over-quarter Apple iPhone shipments will swell 82% in the fourth quarter of 2014.

Leading the charge is iPhone 6, predicted to account for just shy of 60 percent of all sales for the quarter, or 41.65m units. Coming in a distant second is the iPhone 6 Plus, which has been the more talked about next-generation variation due in large part to its scarcity at retail outlets. Kuo says the 6 Plus supply shortage is not only an indicator of high demand, but also confirmation that suppliers are having production issues. He believes final fourth quarter sales are largely dependent on supply chain success with 6 Plus yields.

Given Apple’s current situation, Kuo foresees a major slip in iPhone sales for the first quarter of 2015, mostly due to poor off-season demand. The analyst pegs shipments at a combined 49.4m units, including 21.6m iPhone 6 handsets and 10.2m iPhone 6 Plus versions.

71.5m units in CQ4 would be a 40% increase, year-on-year (and would probably challenge Samung for shipments). 49.4m in CQ1 would be just a 13% increase. One suspect it might be more evenly split than that.

Video calling is growing into a key mainstream activity on smartphones, with high adoption rates in some markets, according to a survey by Gartner, Inc. The survey, which was conducted in June 2014, surveyed more than 6,500 U.S. and German consumers about their technology usage and attitudes in order to gain a better picture of how devices are used for work and leisure.

More than 50 million adult smartphone users in the U.S. (about 35% of the total surveyed) use their smartphones for video calling. This number is likely to exceed 60 million people when those ages 17 and younger are included. In Germany, more than eight million adult smartphone users (about 20%) use their devices for video calling, a figure more likely to exceed 10 million when those ages 17 and younger are included. Gartner defines video calling as person-to-person communication using a video application such as Apple’s FaceTime, Skype or Google Hangouts…

…The survey results showed adoption is markedly skewed toward the younger demographic, with video calling in the 18 to 24 age group reaching 53.5% in the US and 30% in Germany. Video calling uptake is slanted toward early adopters but shows encouraging signs of expansion across all consumer segments.

FaceTime, Skype, Hangouts – Apple, Microsoft and Google, pitted against each other once again. Except they use it for slightly different purposes: FaceTime ties users to iOS; Skype makes money and has corporate tie-in; Hangouts.. well, that’s a bit less clear. It’s always felt like a wannabe Skype.

I recently had a meeting with top officials in one of the major PC companies and asked them about their position on 2-in-1’s and convertibles. They told me they believe they need to have one or two models of these designs in their overall line up but the majority of what they will create and bring to market will still be clamshell based. They pointed out they are not seeing any real demand for these in IT yet and only slight interest by consumers. One reason the interest in something like Surface Pro is low is because of its price. They are two to three times the price of a cheap laptop.

Unless the Surface Pro is targeted at field service or as a replacement for those who use clipboards, I believe IT interest will continue to be soft at least for the 2 in 1 detachable. Lenovo tells me they have actually done well with their Yoga convertibles, especially in enterprise accounts, however it is still a minority when it comes to the total number of clamshell laptops they ship each year.

What up humans?! Bradley Voytek here again. Man do we have some crazy #uberdata for you today.

And then over three years later, I’ll delete it! Or someone will, realising that it’s a gigantic stain on our credentials.

First “Rides of glory” (about people avoiding the “walk of shame” by getting a cab some hours after being dropped off at a particular destination) and now now this.

Uber is clearly trying to pretend that its ability to peer at data relating to specific users can somehow be forgotten.

Unfortunately, the Internet Archive begs to differ. Speaking of which, have you donated to its upkeep?