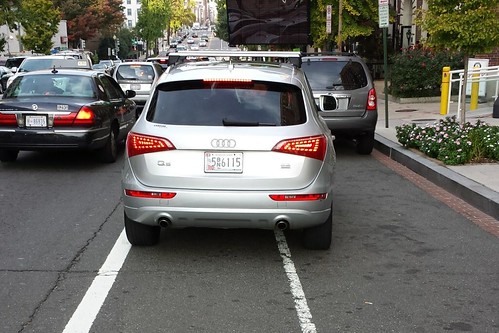 Uber driver parked in the bike lane. Photo from Flickr.

A selection of 11 links for you. Use them wisely.

How to get away with Uber >> Matter on Medium

Bobbie Johnson (with whom I used to work, long ago, at The Guardian):

Raw, pure, unbridled ambition is an uncomfortable thing to look at. It’s not that it’s ugly, necessarily. It’s just brutally, shockingly honest. Uber does not pretend to have a glorious philosophy—it wants to make transport easy, but there is no aspiration as lofty as “organize the world’s information” or “make the world more open and connected.” And perhaps that’s the way it should be. After all, would it be more offensive if Uber had a mission beyond itself? It certainly feels like less of a betrayal to know that it just wants to be as big, as powerful, as necessary, as it can be.

He argues that Uber is as greedy to have everything as Amazon – which feels right. (Worth noting: Johnson’s success came from Matter, a Kickstarter-ed project, which was then bought by Medium. So he has experience of being a startup.)

Nothing found for Rides Of Glory >> Uber

Oh, how interesting. Uber has removed the blogpost about tracking peoples’ one-night stands and categorising them by city. Concerned that it revealed invasion of privacy? Concerned about bad publicity?

It’s still in the Wayback Machine if you want it though. Originally put up in August; removed, abruptly, some time after 18 November.

“We estimate iPhone 6 upgrades and purchases will equate to $4 billion in retail sales in November and December,” warns Canaccord analyst Camilo Lyon in a new research paper. That, he says, equates to “approximately 16% of the $24.3 billion in incremental dollar growth expected this holiday season.”

Or, to put it another way, while Apple is likely to see a sales boom, the rest of the mall will be left with a much more modest increase in sales of around 3.3%, says Canaccord.

Different analysts may play with different numbers for sales of iPhone 6s. And the amount consumers spend will depend to some extent on whether they get subsidized iPhones now, and pay higher mobile fees each month over the next two years, or pay the full cost of the iPhone upfront and then shop around for a cheaper mobile deal.

But even though different people will quibble about the numbers, the analysis is surely “directionally correct,” as we used to say at McKinsey & Co.

when Microsoft raised the amount of OneDrive storage it provides for free accounts earlier this year, it also shared an interesting factoid about the data storage habits of the average user. “Our data tells us that 3 out of 4 people have less than 15 GB of files stored on their PC. Factoring in what they may also have stored on other devices, we believe providing 15 GB for free right out of the gate – with no hoops to jump through – will make it much easier for people to have their documents, videos, and photos available in one place.”

Both Google Drive and Microsoft’s OneDrive provide users with 15GB of storage for free. Even if you’re part of the 1 out of 4 users that exceeds 15GB, unless you’re an uber power user with an archive of HD movies to store in the cloud, you most likely won’t exceed 100GB. Both Google and Microsoft offer a 100GB plan for $2 per month. All of this works out to mean that 75% of the users have less than 15GB of data and will get no value out of the Chromebook promotion, while most of the remaining 25% could get by with 100GB of Drive storage, so the actual value of the Chromebook deal is more like $48.

Also, if you do need that much storage, the free offer will run out – and then you’ll be paying $10 per month.

I set the Echo on my desk which is toward the middle of my loft apartment. This room is big (approximately 40 x 30 feet) and has poor acoustics due to the concrete celings, hardwood floors, and exposed ventwork.

Having long worked with speech recognition and voice input, I am extremely impressed with how accurately it works on the Echo. The Echo can hear voice commands from over 30 feet away and it does so even with music playing. The microphone array is very, very good.

Alexa handles multiple speakers well. I invited some friends over to see what they thought of the Amazon Echo and had them all give Alexa commands or ask questions from all over the apartment. My friends were as impressed as I was, as Alexa heard each one without fail, and did the bidding of each. I suspect most, if not all, of them will buy an Echo when they are readily available.

Well well – Amazon knocks it out of the park.

Using a password manager on Android? It may be wide open to sniffing attacks >> Ars Technica

In early 2013, researchers exposed some unsettling risks stemming from Android-based password managers. In a paper titled “Hey, You, Get Off of My Clipboard,” they documented how passwords managed by 21 of the most popular such apps could be accessed by any other app on an Android device, even those with extremely low-level privileges. They suggested several measures to help fix the problem.

Almost two years later, the threat remains viable in at least some, if not all, of the apps originally analyzed. An app recently made available on Google Play, for instance, has no trouble divining the passwords managed by LastPass, one of the leading managers on the market, as well as the lesser-known KeePassDroid. With additional work, it’s likely that the proof-of-concept ClipCaster app would work seamlessly against many other managers, too, said Xiao Bao Clark, the Australia-based programmer who developed it.

Password manager companies blame Android’s clipboard function, which is available to any app and has no interface securing it.

Keep an eye on what matters >> CamioCam

Turn any tablet, computer, or smartphone into a home monitoring camera that lets you see what’s happening at home when you’re away… CamioCam records and uploads to the cloud only when motion is detected. Then image analysis and machine learning algorithms identify the most important events that were recorded. CamioCam learns what you care about from the way you use it, so it gets smarter over time.

One device for monitoring is free; each extra one is $9 per month. It’s encrypted (“No one, including CamioCam engineers, can ever see what you’ve recorded unless you choose to share it explicitly”) and claims to use very little upstream bandwidth – 33.3kbps.

Worth trying? For iOS and Android. (I’ve downloaded it, but haven’t yet tried it.)

It sounds perfectly fair and reasonable: if an artist wants to make more money all they need to do is get more plays. But there’s a major disconnect in this economic model that has not been discussed widely: Spotify doesn’t make money from plays. They make money from subscriptions*.

So how is that a disconnect?

Let’s say I am a huge fan of death metal*. And nothing pumps me up more than listening to my favorite death metal band Butchers Of The Final Frontier. So I sign up for Spotify in order to listen to their track “Mung Party”. I listen to the track once, and then I decide Spotify isn’t for me. OK, So who got the benefit of the $10 I paid in subscription fees?

Suggested solution: pay royalties in proportion to the amount that artists are played by subscribers. Interesting idea – it’s almost like paying the artists directly. As if you were buying their content. Uh..

A communal biometrics framework supporting the development of open algorithms and reproducible evaluations.

In other words, face detection and matching, in open source. This stuff is now becoming available to anyone, not just governments. How soon before it’s in apps on phones? Why isn’t it already in apps on phones?

Nothing terrifies me more than an app with no moral conscience in the desperate pursuit of revenue that has full access to everything on my phone: contacts, address book, pictures, email, auth tokens, you name it. I’m not excited by the prospect of installing an app on my phone these days. It’s more like a vague sense of impending dread, with my finger shakily hovering over the uninstall button the whole time. All I can think is what shitty thing is this “free” app going to do to me so they can satisfy their investors?

His argument is that the low price of apps is inevitable, and that you’re paying with your time. Also, apps are in a mess.

Initiating coverage of SanDisk with Buy and $123 target >> BTIG Research

Part of our bullish thesis on SanDisk is based on the assumption that the NAND industry will behave differently than it has in the past when it comes to increasing supply, whether it be from technological change or the investment decisions of the key participants. This view will likely result in derision from those who have far longer experience than us in evaluating the historical volatility in the memory market, which may prove to be well deserved. However, we think our outlook has merit based on five key factors;

• Moore’s Law is over. The densification of memory cells has reached its limit
• New technologies like 3D [transistors] are costlier and taking longer to deploy
• The drop in price per bit calls into question the value of investing in more capacity
• NAND competitors have different strategic and investment priorities
• There is a sustained strong level of demand

As newcomers to this sector of the ecosystem, we will have to continue to test our thesis but we think investors should, at a minimum, be second-guessing their established views on how the industry works.

Basically, BTIG sees a decline so continuous in pricing that it thinks it’s uneconomic to invest in new capacity. This hasn’t happened in the past, so let’s see how that pans out.