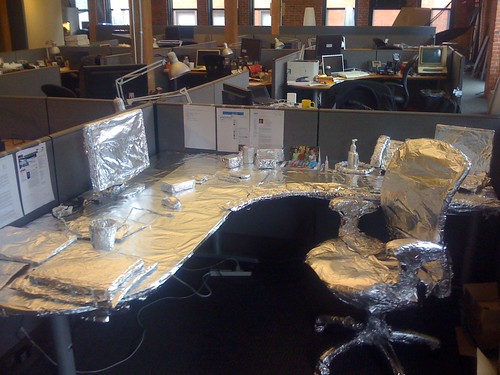 This might be what to do with trading algorithms on April Fools Day. Photo by kippster on Flickr.

A selection of 10 links for you. Not thixotropic. I’m charlesarthur on Twitter. Observations and links welcome.

Chinese smartphone vendors entered the Malaysian market in earnest in 2013, and this accelerated in 2014 with the various brands winning over a sceptical market with their price-to-performance models.

“The story is that the low-end market is getting more competitive and many phones that carry good specs are already priced below RM700,” says [Jensen] Ooi [IDC market analyst for client devices at IDC Asia Pacific].

Feeling the pain here from the rapid commoditisation of the mid-tier market are the traditional large players like Samsung, Sony and LG, which are unable to differentiate their phones at price points above RM700.

IDC’s data shows that sub-RM700 phones made up nearly 60% of the Malaysia market in 2014, up from nearly 40% the year before. The majority of the growth has been captured by the Chinese vendors at the expense of Samsung, Sony and LG.

More bad news for these Android vendors: “Their share in the mid-range and high-end market has weakened and will continue to weaken this year, with only Apple continuing to grow there in 2014,” says Ooi.

Samsung is not only using its own Exynos mobile processor, as had been widely reported, but also decided to rely on its in-house semiconductor business to source other parts, including the modem and power management integrated circuit chips, Ottawa-based consultancy Chipworks said in a web posting dated April 2.

Samsung is counting on its new flagship Galaxy S6 and S6 edge phones to help revive earnings momentum after a disappointing 2014. Strong sales of system chips such as its Exynos processor could also help boost earnings, analysts and investors say.

“It’s pretty clear if they’re using Shannon for the modem for AT&T that they’re trying to use all-Samsung silicon,” said Jim McGregor, an analyst at Tirias Research. “With their market share going down they’re under pressure to increase profit margins.”

Makes sense (and poses a problem for Qualcomm): the more Samsung-built chips are in each phone, the greater its profit. Samsung Electronics’s preliminary results – its range of expected revenues and operating profit – are released on Tuesday 7 April; full results by division later in the month.

Apple began working on various waterproofing methods for iDevices back in 2010 and in 2013 devised a waterproofing nano coating. In March we posted a report covering Apple’s most advanced invention on waterproofing to date titled “Apple Invents a Waterproofing Method for Future iDevices using Hydrophobic Conformal Coatings and Silicon Seals.” Today, the US Patent & Trademark Office published yet another waterproofing patent application from Apple that specifically covers a water tight button solution for iDevices.

It feels like an obvious solution, and covers the power switch and volume switches. Is the headphone jack and Lightning port close-ended? In that case water resistance would be sorted – and could become another extra feature to differentiate from past models.

Wal-Mart’s executive in charge of payments thinks the United States’ switch to chip-based credit cards is going to be a disappointment.

The new “chip & signature” program is barely an improvement on security and fraud, said Mike Cook, Wal-Mart’s assistant treasurer and a senior vice president, at this week’s Electronic Transaction Association’s Transact conference in San Francisco. Cook said Wal-Mart would have preferred a “chip and PIN” system that Europe and Africa have, since PINs would protect cards from being stolen.

“The fact that we didn’t go to PIN is such a joke,” Cook told CNNMoney.

Cook said signatures on checks were sufficient 100 years ago, but they’re outdated today. PINs on debit cards were a major improvement to stop thieves decades ago. They’d do the same for credit cards – which is why banks should use them for all cards.

“Signature is worthless as a form of authentication,” Cook said during a presentation at the conference. “If you look at the Target and Home Depot breaches … not a single PIN debit card needed to be reissued in those breaches. The card number was worthless to the individual thief and fraudsters, because they didn’t know the PIN.”

Americans truly have no idea how backwards their financial systems are.

Testifying in his own defense, [Wocjciech] Florczykowski, a 40-year-old electrical engineer, described himself as a history buff with an interest in World War II, specifically battlefield memorabilia. In pursuit of that hobby, Florczykowski said he occasionally travels to battlefields in Poland where he and other military history buffs use metal detectors to unearth everything from medals and canteens to shells, grenades and unexploded land mines.

He testified he was using a program called uTorrent (which enables users to share large files) to research explosives on a laptop supplied to him by his former employer DLS Electronic Systems in Wheeling and inadvertently downloaded pornography.

“What I discovered was completely disgusting. I was not looking for this stuff,” he said, adding that he moved the offensive images and other unwanted material to a folder he intended to delete but was fired from his job before he could do so.

Discovering information on explosives on the laptop, his supervisors alerted federal authorities.

In the Capitol case the Court noted that while Grooveshark keeps records of all processed DMCA takedown complaints and associated users, it does not keep an “independent record” of repeat infringers.

“Escape does not try to identify repeat infringers and fails to keep
records that would allow it to do so,” the judge said.

Grooveshark says it is now dealing with that criticism.

“In an era of simple database queries this new requirement may be redundant, but we will now create an additional independent record of repeat infringers from our existing databases, until our appeal clarifies this issue for Grooveshark and other hosting services committed to complying with the DMCA,” the company writes.

Grooveshark’s entire business model is basically built around passive piracy – letting people upload and then share stuff whose copyright they don’t own. The music labels have been trying to tear it down for years; it’s basically a wart on the face of the web.

On April 1, five minutes before the market closed, Tesla put out a spoof press release on its official feed. The stock leapt, then drooped:

So people lost maybe as much as a few hundred thousand dollars because, for a brief stupid minute, they thought that Tesla was introducing … a watch? No, of course they didn’t. They thought Tesla was introducing a thing called the Model W, and they didn’t read any further than the headline, and they bought Tesla stock hoping that the Model W, whatever it was, would be a huge success (or would be perceived as a huge success by someone else a minute later), and then they realized that they’d been fooled, and they sold the stock at a small loss and moved on with their day. And when I say “people” I mean mostly “algorithms,” which are faster and more literal than humans, though in the space of a minute it is conceivable that an actual human saw that headline and fired off a buy order before reading any further.

How graphene may revolutionize the mobile industry » Android Authority

Graphene can allow for super-efficient batteries that charge within minutes and last much longer than conventional Li-ion batteries, composite materials that make devices lightweight and extremely durable, touch screens that are flexible and transparent, and even chips that are extremely small but much faster than silicon chips.

Love graphene as a concept (and reality), but it’s weird how its implementation is always five years away.

Pretty brutal treatment, though. (Also includes abuse of HTC M9.) Here, by the way, is a Samsung executive at the S6 launch assuring the audience it won’t bend:

A little part of me wonders about the original “bendgate” stories and their origin.

we’re not big on linking out. And it’s not because we’re luddites, or not because we don’t want to send traffic to other people. It’s that we don’t want to undermine the reassuring impression that if you want to understand Subject X, here’s an Economist article on it — read it and that’s what you need to know. And it’s not covered in links that invite you to go elsewhere. We’ll link to background, and we’ll link to things like white papers or scientific papers and stuff like that. The idea of a 600-word science story that explains a paper is that you only need to read the 600-word science story — you don’t actually have to fight your way through the paper. There is a distillation going on there.

I do like that thinking, having lived with it the majority of my life. (Do the links here actually help you? Do you click through? Most people don’t.)

Also worth reading: his observations about ads (“they’re going to go away”) and millenials – who, he says, are “all fans of Snapchat, AdBlock and incognito [mode]”.