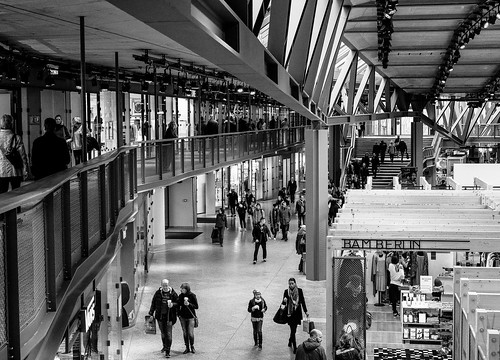 You think you’re anonymous, but with three points of data you’re probably not. Photo by mripp on Flickr.

A selection of 10 links for you. Available in other colours. I’m charlesarthur on Twitter. Observations and links welcome.

Rolfe Winkler and Shira Ovide say it’s going to be a minority investor in a $70m round:

Google has frustrated manufacturers in recent years by requiring them to feature Google apps and set Google search as the default for users, in exchange for access to the search engine, YouTube, or the millions of apps in its Play Store.

Such restrictions make it harder for apps that compete with Google’s to win distribution on Android devices. For Microsoft, that means less exposure for its Bing search engine, which is up against Google search. It also could limit growth of other Microsoft software products.

Cyanogen offers an alternate version of the Android mobile operating system free of such restrictions. The 80-person company claims to have a volunteer army of 9,000 software developers working on its own version of Android.

“We’re going to take Android away from Google,” said Kirt McMaster, Cyanogen’s chief executive, in a brief interview last week. The next day, at an industry event sponsored by tech news service The Information, McMaster said Cyanogen had raised $100 million to date. Previously the company had disclosed that it raised $30 million of funding. The company spokeswoman declined to make McMaster available for this story.

McMaster said more than 50 million people use a version of the Cyanogen Android operating system, most of whom have installed it in place of their phone’s initial operating system.

Nokia X didn’t do it; might Cyanogen be the route for Microsoft to get its services onto AOSP?

Unique in the shopping mall: On the reidentifiability of credit card metadata » Science

Science magazine has a special this week on data and privacy. Here, it looks at how many data points are needed to identify someone uniquely:

To provide a quantitative assessment of the likelihood of identification from financial data, we used a data set D of 3 months of credit card transactions for 1.1 million users in 10,000 shops in an Organisation for Economic Co-operation and Development country (Fig. 1). The data set was simply anonymized, which means that it did not contain any names, account numbers, or obvious identifiers. Each transaction was time-stamped with a resolution of 1 day and associated with one shop. Shops are distributed throughout the country, and the number of shops in a district scales with population density (r2 = 0.51, P < 0.001) (fig. S1).

How many data points for identification? Three.

In a near tie, Apple closes the gap on Samsung in the fourth quarter as worldwide smartphone shipments top 1.3bn for 2014 » IDC

“First, at a time when average selling prices (ASPs) for smartphone are rapidly declining, Apple managed to increase its reported ASPs in the fourth quarter due to higher-cost new models. Second, the growth of iPhone sales in both the U.S., which is considered a saturated market, and China, which presents the dual challenges of strong local competitors and serious price sensitivity, were remarkable. Sustaining this growth and higher ASPs a year from now could prove challenging, but right now there is no question that Apple is leading the way.”

In 2013 IDC talked about the smartphone industry topping the 1 billion unit milestone, and while year-over-year growth did slow from 40.5% in 2013 to 27.6% in 2014, the market clearly still has legs. This past year volumes surpassed 1.3 billion units and the vendor scenario has witnessed continued shakeups. Growth is forecast to decline to the mid-teens in 2015, but opportunity exists as much of the world’s population is either not a wireless subscriber or has yet to move to a smartphone.

“That the worldwide smartphone market grew by 27.6% in 2014 is noteworthy, but it also represents a significant slowdown compared to 2013,” said Ramon Llamas, Research Manager with IDC’s Mobile Phone team. “Mature markets have become increasingly dependent on replacement purchases rather than first-time buyers, which has contributed to slower growth. In emerging markets, first-time buyers continue to provide a lot of market momentum, but the focus has shifted toward low-cost devices, creating a different dynamic for both global and local vendors.

IDC reckons Apple was 0.6m behind Samsung. Strategy Analytics reckons Samsung was ahead. Counterpoint reckons Apple was ahead. Samsung, in its results call, said it sold (maybe “shipped”) 95m handsets (including featurephones) in Q4, of which “71m to 76m” were smartphones.

You have to love the intentional inaccuracy in Samsung’s statement. It knows how many it shipped.

Yeah yeah, but this is one of the more interesting points:

Apple’s overall operating profits for the quarter were $24.2bn, up 36.9% over the year-ago quarter. That means Samsung Mobile is now earning less than 7.5% of Apple’s profits while still shipping more phone units.

Never trust a corporation to do a library’s job » Medium

Two months ago, Larry Page said the company’s outgrown its 14-year-old mission statement. Its ambitions have grown, and its priorities have shifted.

Google in 2015 is focused on the present and future. Its social and mobile efforts, experiments with robotics and artificial intelligence, self-driving vehicles and fiberoptics.

As it turns out, organizing the world’s information isn’t always profitable. Projects that preserve the past for the public good aren’t really a big profit center. Old Google knew that, but didn’t seem to care.

The desire to preserve the past died along with 20% time, Google Labs, and the spirit of haphazard experimentation.

Google may have dropped the ball on the past, but fortunately, someone was there to pick it up.

The Internet Archive stands at least alongside Wikipedia (and perhaps ahead of it?) as one of the great efforts of the internet.

“We will further eat away at the 70% of transactions that are still settled in cash in Europe,” he says. “We will make use of the abundance of digital technology that now surrounds us to enable new digital payment solutions. And, most importantly, we will deliver an even better quality of service to retailers and consumers alike by making payment simpler, smarter and more secure than ever before.”

One could interpret that to mean that Visa is going to be a partner with Apple in introducing ApplePay in Europe in 2015.

“If we sold more low-end phones, we could even double our shipments…but in the low-end market there is no margin,” said Richard Yu, who heads Huawei’s consumer business group, at a briefing at the company’s headquarters in Shenzhen Tuesday.

Competition in the global smartphone market is intensifying and while Apple Inc. dominates the high-end segment globally, most vendors selling smartphones that use Google Inc.’s Android operating system are struggling to set themselves apart from rivals.

Mr. Yu said most low-cost vendors from China will likely disappear in three to five years because their business models aren’t sustainable. “There are too many brands in this industry,” he said.

Huawei is developing a habit of telling it like it is. Recall that it said there was no money to be made selling Windows Phone either.

Qualcomm implied its chip has, indeed, missed the initial shipments of Samsung’s “Galaxy S6” flagship phone, expected out next month, which has been rumored in the last couple of weeks, without Qualcomm actually mentioning Samsung:

A shift in share among OEMs at the premium tier, which has reduced our near-term opportunity for sales of our integrated Snapdragon™ processors and has skewed our product mix towards more modem chipsets in this tier; Expectations that our Snapdragon 810 processor will not be in the upcoming design cycle of a large customer’s flagship device; and Heightened competition in China.

It feels – taken together with Samsung’s results – as though Samsung is aiming to use its own Exynos processors, in order to get the maximum use (and so profit) from its chip factories; if LG can get the 810 into a phone without trouble, as seems to be the case, Samsung probably can.

The other Chinese competition is principally from TSMC and Mediatek.

As the average gross margin for China-based white-box tablet vendors/makers dropped below 5% in 2014, at least 30% of them have withdrawn from the market and shifted production to mobile power supplies, driving recorders and mobile device accessories, according to China-based National Business Daily (NBD).

White-box tablet production is concentrated in Shenzhen, southern China, and retail prices for such tablets mostly range from CNY299 (US$48.4) to CNY399, NBD said.

That’s pretty thin pickings, but suggests the low end of the market is getting cleared out.

Ever since I began my Tropes vs Women in Video Games project, two and a half years ago, I’ve been harassed on a daily basis by irate gamers angry at my critiques of sexism in video games. It can sometimes be difficult to effectively communicate just how bad this sustained intimidation campaign really is. So I’ve taken the liberty of collecting a week’s worth of hateful messages sent to me on Twitter. The following tweets were directed at my @femfreq account between 1/20/15 and 1/26/15.

I’d really like to see an analysis that looks at when the abusive accounts were created, and what sort of use they are put to if they aren’t being abusive. There are two competing hypotheses: one, that it’s the work of a small and super-determined coterie who create abusive accounts; two, that it’s a large group of real people who are all just jerks. Hard to figure out which would be worse.