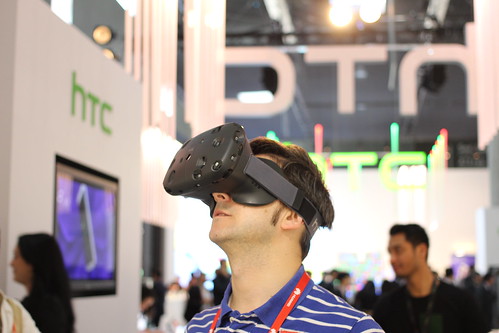 “Hey, I can’t find our product marketing guy in here either!” Photo of an HTC Vive wearer by pestoverde on Flickr.

We’ve caught sight of more chips at the other end, so we ditch the battery and move to the fun stuff—like the teeeny logic board!

This little board is folded in half to make the most of the minimal space. Clever! 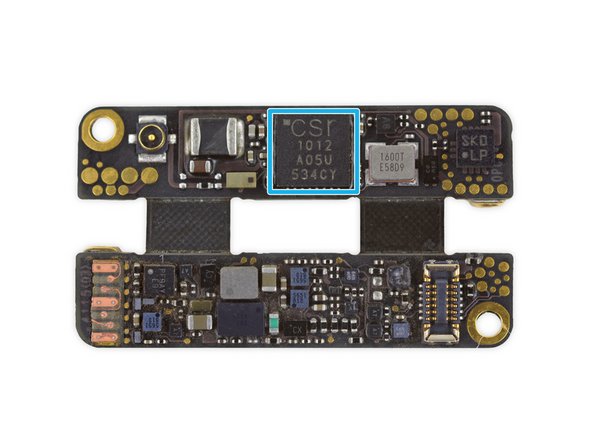 What is this—a logic board for ants? Not quite, but weighing in at a whopping 1.0 gram it’s definitely the smallest we’ve ever seen.

IBM on Wednesday launched a new app and service called Watson Trend, which forecasts what consumer products will be popular this holiday season based on online chatter. Currently dominating the list: the Apple Watch.

IBM Watson Trend is a free download from the iOS App Store, designed for both iPhone and iPad. It uses IBM’s supercomputer technology to read and interpret millions of reviews, expert blogs and social media conversations to determine what gifts people are talking about.

By far the most popular device on the list is the Apple Watch, which has maintained a “trend score” above 90 (out of 100) since mid-August. With a perfect score of 100 as of Wednesday, the Apple Watch has a score nearly double that of the next closest product: Samsung TVs.

Of course, the Watson algorithm simply says that users are talking about the Apple Watch, not necessarily buying it. Apple’s actual hottest selling product is the iPhone lineup, which observers expect to sell nearly 80m units in this quarter alone.

The report has been produced with technology from Jaunt Inc and uses a camera with multiple lenses to take a 360-degree moving image.

This can be then viewed with a smartphone placed inside a Google Cardboard VR viewer, which costs around £15.

It’s the future; mark it in your diary for future reference.
link to this extract

Gawker the tech company is back to being just Gawker the media company.

Alongside the news that it’s shifting its coverage to focus on politics, Gawker said that it’s also abandoning its pipe dream of licensing its publishing and commenting platform Kinja to other media companies. The shift away from the licensing model made sense, “given the competition that exists from technology companies devoted entirely to that challenge,” wrote CEO Nick Denton. Gawker, will, however, continue to use the platform for its own sites.

Gawker called itself a tech company for the same reason that the likes of BuzzFeed and Vox Media do: Compared to the sky-high valuations and thick margins of tech companies, media companies make for bad investments. The “media-company-as-tech-company” narrative made for better PR story than an actual business model.

Harsh, but fair. I could never see how anyone would want to buy Kinja – the price of commenting and publishing platforms has long since fallen to zero, since (or possibly before) WordPress 1.0.
link to this extract

Fascinating live map of public transport in Berlin. Notable too because the map is from OpenStreetMap, not Google. (Via Benedict Evans.)
link to this extract

In an exclusive interview with UploadVR, Gattis said that his decision came down to two things, the technology’s potential and how close that potential was to being realized.

“I think what struck me so much about Magic Leap was the quality of the technology and seeing how far along it was. I knew there was a great vision but I didn’t know how far along the technology was and how close it is to becoming real and commercial,” he says. “That was the biggest takeaway for me, how it advanced and how quickly it has gotten to the point it is at now.”

One of the things that makes Gattis’ hire as the Director of Product Marketing so interesting is it suggests that the company may be getting close to finally pulling back the veil on what they have been working on. Recently, Magic Leap began speaking a little bit more about its technology now that it has moved out of the R&D phase and into the “transitional stage for presenting a new product.”

“Do you want to work at our gigantically VC-funded company on the west coast, or for that dwindling company which is laying people off?” Tough recruiting pitch, eh.
link to this extract

the recently-released iPad Pro seems to have the much-awaited USB3 capability on its Lightning connector. It does ship with a Lightning-to-USB2 cable, though, and USB3 capability isn’t mentioned in the tech specs.

The main objection to this actually happening is that Lightning, with its 8 pins, doesn’t have enough pins to support the standard USB 3 specification. This is, again, the old assumption that Lightning cables are “just… wires leading from one end to the other”.

To restate what I posted previously, if you actually look at the USB3 pinout, there are the two differential pairs which Lightning already has, and one additional pair for USB2 compatibility. So a legacy wire-to-wire USB3 cable would need 9 pins — but, remember, Lightning connectors don’t work that way!

In other words, if you plug in an old Lightning-to-USB2 cable into an iOS device, the cable itself already has to convert the two differential pairs to USB2’s single pair. So, no need to have the extra legacy pair on the Lightning connector itself — a future Lightning-to-USB3 cable will generate that as well, and use the two high-speed pairs when plugged into a USB3 peripheral. The current pinout is, therefore, quite sufficient.

So.. USB3 for free? Seems good. What’s the delay, then?
link to this extract

What is Sky Q, when is it coming and how can I get it? » Pocket-lint

The Sky Q Mini box is your gateway to viewing Sky content in other rooms. This connects to your main Sky Q box, either by Wi-Fi or via powerline networking, letting you use your electrical wiring to carry the information between boxes. Powerline networking is built-in across Sky Q devices, which works if you also subscribe to Sky broadband and have the Sky Q Hub installed.

The Sky Q Mini box also only supports up to full HD, but it can work as a Wi-Fi hotspot, expanding your Sky Broadband connection. Again, this is reliant on a Sky Q Hub. It is possible to use the Sky Q TV service and the Mini boxes using a separate internet service provider, but you cannot use them as Wi-Fi extenders or through powerline connectivity.

You’ll get full access to all the Sky Q features through the Mini box, be that live TV, watch recordings stored on the main Sky Q or Silver boxes, or view on demand content.

Sky Q touch remote: The new remote adds touch, so there will be less button pressing and more swiping to help you get around. It’s also a Bluetooth remote, so there’s no need for line-of-sight, perfect for those who want to hide the Sky Q box out of sight.

It also features a built-in microphone, and in the future it will be offering voice as a search option, helping you quickly find your content.

Sky, clearly, begs to differ with the notion that “the future of TV is apps”. It’s going pretty strongly for the integrated viewing approach. It’s also adept at staying just in line with peoples’ expectations for how they want to consume content.
link to this extract

Neat and cheap idea for how you keep the Apple Pencil from vanishing: plug it in to the device. Come on, Jony Ive, your team’s falling behind.
link to this extract

Schneider grapples with the amazingly detailed yellow taxi data – pickup and dropoff points (seriously – who cares about privacy, eh?) – and compared it with “green taxi” (non-Manhattan) and Uber trips:

Uber is clearly expanding the market, which is not what the narrative might lead you to expect.
link to this extract

Trump-free browsing. Block links, images and websites related to the word Trump. Why would you want anything Trump on your iPhone? Banish Trump from the web. The easiest way to make Trump go away for good. No need to manually edit blacklists, rules, etc. Filter Trump out of your life.

I think everyone can agree that this is A Good Thing.
link to this extract