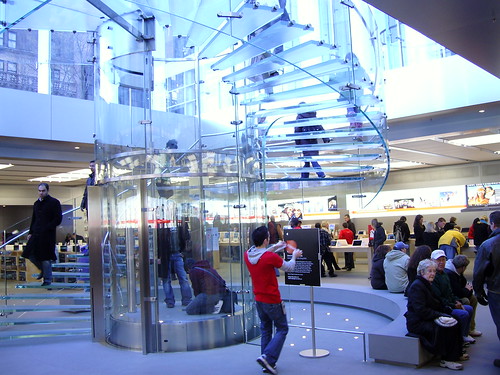 Now that some Apple retail staff are considering forming a union, the company is suddenly very solicitous of their wellbeing – as long as they don’t join. CC-licensed photo by Joakim Jardenberg on Flickr.

A selection of 7 links for you. Sparse. I’m @charlesarthur on Twitter. Observations and links welcome.

The Federal Trade Commission is taking action against Twitter, Inc. for deceptively using account security data for targeted advertising. Twitter asked users to give their phone numbers and email addresses to protect their accounts. The firm then profited by allowing advertisers to use this data to target specific users. Twitter’s deception violates a 2011 FTC order that explicitly prohibited the company from misrepresenting its privacy and security practices. Under the proposed order, Twitter must pay a $150m penalty and is banned from profiting from its deceptively collected data.

“As the complaint notes, Twitter obtained data from users on the pretext of harnessing it for security purposes but then ended up also using the data to target users with ads,” said FTC Chair Lina M. Khan. “This practice affected more than 140 million Twitter users, while boosting Twitter’s primary source of revenue.”

“The Department of Justice is committed to protecting the privacy of consumers’ sensitive data,” said Associate Attorney General Vanita Gupta. “The $150m penalty reflects the seriousness of the allegations against Twitter, and the substantial new compliance measures to be imposed as a result of today’s proposed settlement will help prevent further misleading tactics that threaten users’ privacy.”

This is about the period from 2014 to 2019, when it collected 140 million numbers and “failed to mention” that they would also be used for targeted advertising. Such an oversight.
unique link to this extract

Elon Musk plans to rely more heavily on equity to finance his $44bn deal for Twitter amid a sharp decline in Tesla stock in recent weeks.

Mr. Musk’s funding plan now includes $33.5bn in equity, up from $27.25bn, according to a Wednesday regulatory filing. He no longer plans to rely on a margin loan backed by Tesla shares, which are down by about a third since he struck a deal with Twitter in late April.

As of early May, Mr. Musk had lined up about $7.14bn from 19 investors whose participation effectively reduces the personal risk Mr. Musk has to take to close the $44bn deal for the social-media company.

The disclosure came soon after Twitter’s chief executive on Wednesday told shareholders the company is proceeding with work on the deal after Mr. Musk previously said the deal was “temporarily on hold.”

“We are working through this transaction process,” CEO Parag Agrawal said at Twitter’s annual shareholder gathering. “Even as we work toward closing this transaction, our teams and I remain focused on the important work we do every day.”

So not really on hold; it’s gone quiet because they’re working out the money. Separately, Jack Dorsey is leaving the Twitter board, the last of the three founders to exit. He’s thought to be closely involved with Musk on this deal, so it might only be a temporary thing. Or his departure might be a big thing. We really don’t know.
unique link to this extract

Before the trial even began, Judge Christopher A. Ramras scrubbed the very piece of writing that rocketed the case into national orbit: Brophy’s 2011 post entitled “How to Murder Your Husband,” an essay that laid out a detailed list of supposedly tongue-in-cheek advice for anyone interested in offing their spouse.

“I spend a lot of time thinking about murder and, consequently, about police procedure. After all, if the murder is supposed to set me free, I certainly don’t want to spend any time in jail. And let me say clearly for the record, I don’t like jumpsuits and orange isn’t my color,” she wrote.

The jury never got to read the post, which turned out to be a chilling prophecy. Divorce is expensive, Brophy suggested, and “if you married for money, aren’t you entitled to all of it?” But to carry out a successful murder would require you to be “organized, ruthless and very clever,” because “the police aren’t stupid. They are looking at you first.”

The Portland Police detectives who investigated Dan Brophy’s killing aren’t stupid, presumably, but in the hours following the shooting, they assumed his wife was a grieving widow, not a murderer.

Then, the damning evidence poured in: surveillance footage showing Brophy driving to and from the crime scene, during the exact window her husband was shot, contradicting the writer’s claim that she’d been at home in bed the whole time. Research she conducted on her own computer, about how to buy and assemble an untraceable “ghost gun,” then the purchase of an already assembled Glock from a Portland gun show, and an untraceable replacement slide and barrel on eBay.

You may have heard of nominative determinism (where your name fits your career), but this surely goes above and beyond.
unique link to this extract

Apple vice president of people and retail Deirdre O’Brien is explicitly dissuading employees from joining a union in an internal video leaked to The Verge. “I worry about what it would mean to put another organization in the middle of our relationship,” she says. “An organization that does not have a deep understanding of Apple or our business. And most importantly one that I do not believe shares our commitment to you.”

This message comes amid union drives at three of Apple’s retail stores — one in New York, one in Maryland, and one in Georgia. The latter two have set dates to hold elections, which they agreed to with Apple. Workers at the Cumberland Mall Apple store will vote on whether to unionize starting June 2nd, and employees at Apple’s Towson Town Center store in Maryland do the same starting June 15th.

In the video, O’Brien shares common anti-union talking points, including that a union would slow the company’s ability to respond to employee concerns. “Apple moves incredibly fast,” she said. “It’s one thing I love about our work in retail. It means that we need to be able to move fast too. And I worry that because the union will bring its own legally mandated rules that would determine how we work through issues it could make it harder for us to act swiftly to address things that you raise. I’m committed to and proud of our ability to act fast to support our teams, to support you. But I don’t know that we could have moved as quickly under a collective bargaining agreement, as it could limit our ability to make immediate widespread changes to improve your experience. And I think that’s what really is at stake here.”

One of the primary issues Apple retail workers are organizing around is pay. In the United States, unionized workers make about 13.2% more than their non-unionized peers in the same sector, according to the Economic Policy Institute.

Can’t imagine what it might be about workers getting paid more that Apple finds unattractive.
unique link to this extract

A new website that published leaked emails from several leading proponents of Britain’s exit from the European Union is tied to Russian hackers, according to a Google cybersecurity official and the former head of UK foreign intelligence.

The site contends that they are part of a group of hardline pro-Brexit figures secretly calling the shots in the United Kingdom.

Reuters could not immediately verify the authenticity of the emails, but two victims of the leak on Wednesday confirmed that they had been targeted by hackers and blamed the Russian government.

…The “English Coop” site makes a variety of allegations, including one that Dearlove was at the center of a conspiracy by Brexit hardliners to oust former British Prime Minister Theresa May, who had negotiated a withdrawal agreement with the European Union in early 2019, and replace her with Johnson, who took a more uncompromising position.

Dearlove said that the emails captured a “legitimate lobbying exercise which, seen through this antagonistic optic, is now subject to distortion.”

Dearlove seems not to have learnt that you don’t make these things better by trying to explain them. But – a Russian hacking operation related to Brexit? It’s like 2016 again.
unique link to this extract

Why Chinese sellers are quitting Amazon • Rest of World

You might have seen the headlines over the past year: Chinese sellers are leaving Amazon. Since early 2021, the e-commerce giant says it has banned 3,000 Chinese accounts for using paid reviewers to artificially inflate ratings, a practice known as “brushing.” The narrative sounds pretty simple, right? Dishonest Chinese sellers gaming the system! Of course they should be punished.

Amazon has said that it issued the bans after repeated warnings over manipulated reviews, and that no seller has been targeted by nationality. Meanwhile, in Chinese media, the sellers have a different account. They describe paying ever-rising costs, while struggling with restrictions on how they sell on the platform.

When they have brushed up their ratings, sellers told Chinese tech media Pingwest, it’s because Amazon’s stringent requirements have pushed them to, in order to survive. (A Chinese e-commerce industry association estimates at least 50,000 banned.)

Either way, the relationship has somewhat soured.

An absorbing read, and it’s not quite as simple as we’ve been led to believe.
unique link to this extract

In what has become something of a hostage scenario, Green has since tried to negotiate the return of what he has called his “kidnapped” ape.

According to blockchain records, Bored Ape #8398 was purchased from the anonymous scammer by “DarkWing84,” a pseudonymous user who dropped more than $200,000 on the NFT before transferring it to another collection named “GBE_Vault.” The transfer happened within minutes, leading some internet sleuths to wonder if they were in fact the same person. Based on this information, Green located DarkWing84 on Twitter but thus far has failed to make contact.

“I’m happy to chat to Seth directly,” the individual claiming to now own the Bored Ape told BuzzFeed News in a Twitter DM. “Just woke up and have seen this craziness. Please put him in contact with me.”

On Tuesday, BuzzFeed News received a tip about a Twitter account belonging to GBE_Vault, which identified them as the Bored Ape’s new owner. BuzzFeed News was able to find this person’s Discord history based on a tweet in which they mentioned having purchased a Damien Hirst canvas titled “Lascaux Gouache.” This transaction was discussed at length by the art marketplace HENI, which described them as an Australian surgeon who goes by the pseudonym “Mr Cheese.” On HENI’s Discord server, Mr Cheese has referenced DarkWing84 numerous times. And to top it off, their profile picture is none other than Bored Ape #8398.

“You are a good detective,” Mr Cheese wrote after BuzzFeed News asked them to confirm ownership of the contentious ape.

Mr Cheese, who uses the Twitter handle “drwerty,” told BuzzFeed News how they buy NFTs using their DarkWing84 account and then transfer more valuable tokens to their secondary vault. Transactions between Ethereum wallets associated with the two accounts support this, and at the moment their cache includes three Bored Apes, three Mutant Apes, and a CryptoPunk.

“I have no plans for the ape,” Mr Cheese added.

Forget it, Jake, it’s Chinatown.
unique link to this extract