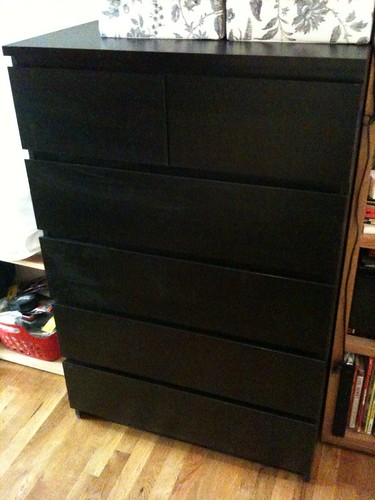 Dark and… lethal. Ikea recalled this dresser because it can kill by toppling onto toddlers. CC-licensed photo by buhny on Flickr.

A selection of 9 links for you. Chin up. I’m @charlesarthur on Twitter. Observations and links welcome.

A harrowing scenario analysis of how human civilization might collapse in coming decades due to climate change has been endorsed by a former Australian defense chief and senior royal navy commander.

The analysis, published by the Breakthrough National Centre for Climate Restoration, a think-tank in Melbourne, Australia, describes climate change as “a near- to mid-term existential threat to human civilization” and sets out a plausible scenario of where business-as-usual could lead over the next 30 years.

The paper argues that the potentially “extremely serious outcomes” of climate-related security threats are often far more probable than conventionally assumed, but almost impossible to quantify because they “fall outside the human experience of the last thousand years.”

On our current trajectory, the report warns, “planetary and human systems [are] reaching a ‘point of no return’ by mid-century, in which the prospect of a largely uninhabitable Earth leads to the breakdown of nations and the international order.”

You might as well read it. Forewarned is forearmed.
unique link to this extract

Ikea is releasing a new product line designed to prevent deadly furniture accidents. Ikea is unveiling the new dressers, which come with built-in safety features, after the company recalled 29 million dressers in 2016 and again in 2017 following the deaths of eight toddlers. The children were crushed when Ikea’s furniture tipped over on them. One of the deadly designs remains on the market today.

The new product line, called Glesvar, includes three types of dressers. The first has an interlocking method similar to what you find in many filing cabinets: If you open one drawer, the dresser prevents you from opening any of the other drawers at the same time. This interlocking mechanism remains until the consumer has properly attached the dresser to the wall, so that there’s no chance of tip-over.

The second Glesvar dresser is similar to the first but more extreme: It won’t let you open any of the dresser’s drawers until you’ve secured it to the wall. The third design has only two legs and must be affixed to the wall completely, since the wall acts as a primary support for the dresser.

For the time being, only the first dresser will be sold in the United States (as well as Germany and the U.K.). It’s the only design that is compliant with a newly proposed update to a safety standard that requires freestanding dressers be structurally sound and not tip over if a 60-pound weight is attached to any of their open drawers

If “design is how it works”, that’s quite an example of lethal design.
unique link to this extract

Visa applicants to the United States are required to submit any information about social media accounts they have used in the past five years under a State Department policy that started on Friday.

Such account information would give the government access to photos, locations, dates of birth, dates of milestones and other personal data commonly shared on social media.

“We already request certain contact information, travel history, family member information, and previous addresses from all visa applicants,” the State Department said in a statement. “We are constantly working to find mechanisms to improve our screening processes to protect U.S. citizens, while supporting legitimate travel to the United States.”

In March 2017, President Trump asked the secretary of state, the attorney general, the secretary of homeland security and the director of national intelligence to put in effect “a uniform baseline for screening and vetting standards and procedures,” according to a memo published in the Federal Register. Requiring information about the social media accounts of visa applicants was part of that.
The move represents a step up from a September 2017 measure in which the Homeland Security Department proposed and enacted a regulation calling for the surveillance of social media use of all immigrants, including naturalized citizens.

This is odd, because a couple of days before this story appeared I re-applied for an ESTA (the UK to US visa travel waiver – in effect the “visa that means you don’t need a visa”), and though the social media question was there, it was optional. Has it changed now? Nobody seems to answer this (and I don’t feel like pretending to fill out an ESTA to find out). The first refusals based on this content will be quite an event, though.
unique link to this extract

The [independent London Policing Ethics] panel said that facial recognition software should only be deployed by police if the five conditions can be met:

• The overall benefits to public safety must be great enough to outweigh any potential public distrust in the technology.

• It can be evidenced that using the technology will not generate gender or racial bias in policing operations.

• Each deployment must be assessed and authorised to ensure that it is both necessary and proportionate for a specific policing purpose.

• Both the Met and the Mayor’s Office for Policing and Crime develop strict guidelines to ensure that deployments balance the benefits of this technology with the potential intrusion on the public.

London’s police force has carried out 10 trials on the use of the technology, but some have prompted criticisms of misuse. Civil liberties group Liberty focused on trials at the Notting Hill Carnival and questioned whether the algorithm had been tested for bias.

The panel “also highlighted the results of a survey of more than 1,000 Londoners on their attitudes to facial recognition that showed more 57% felt its use by the police is acceptable, and the figure increased to 87% when it is used in searching for serious offenders.” Everyone likes intrusive stuff if it’s used to catch the bad guys (and gals).
unique link to this extract

As for demographic, the most common folks we see with these issues are:
• Writers or any kind (blog, scripts, office workers, etc)
• Students of all kinds
• Programmers. …

He’s pretty sure it isn’t dust, which he demonstrates in all sorts of ways. (“Dust” wouldn’t explain why it tends to be the most commonly used keys, and particularly the spacebar – which should be the most tolerant, since there’s more of it? – that tend to be affected.) So what is it?

As for what the actual cause is, honestly I don’t know. My suspicion is that the metal dome experiences metal fatigue and slowly begin to lose connection, or that that little U-shaped cutout in the centre of the dome weakens and starts to easily bounce when pressed, making contact 2+ times. I honestly cannot test this at home, my equipment is woefully inadequate to go that deep.

The vast majority of videos featuring minors on YouTube, including those referenced in recent news reports, do not violate our policies and are innocently posted — a family creator providing educational tips, or a parent sharing a proud moment. But when it comes to kids, we take an extra cautious approach towards our enforcement and we’re always making improvements to our protections. Here are a few updates we’ve made over the past several months:

What it cites (stung, clearly, by the NY Times report featured yesterday)is: “restricting live feature” so kids can’t stream unless clearly accompanied by an adult; disabling comments on videos with minors; and “reducing recommendations… to include videos featuring minors in risky situations”.

Nothing at all, though, about how its recommendation system which drives 70% (70%!!) of views is directing paedophiles towards videos of children.

YouTube isn’t going to deal with this until some existential event forces it to.
unique link to this extract

Today at its WWDC keynote presentation, Apple officially announced iOS 13 arriving later this year for iPhone users. The company demoed a few of the notable new features including Dark Mode, a new swipe-based gesture keyboard, as well as new features for Siri, Photos and AirPods. It also, however, quickly flashed a slide on stage showing over 65 other new iOS 13 features arriving with the release this fall. Take a look…

Craig Federighi’s tongue-in-cheek quip”One thing we hear over and over: Can iTunes do even more?” hints at just how bloated and no longer fit for purpose iTunes had become.

iTunes actually started off as a tool for ripping and burning CDs. In fact, its original marketing slogan was ‘Rip Mix Burn’. It evolved into a tool for managing and playing music and supporting the iPod. Over time it layered in videos, books, apps, Apple Music etc etc. But one thing iTunes never excelled on, even before it suffered from feature bloat, was being a great music player. It was if it could never quite shake off its origins. Apple Music has of course picked up the player baton and run with it for Apple. Now that iTunes has splintered into three apps, we should start to see the evolution of three distinct sets of user experiences. Apple hasn’t pushed the boat out yet because it has a fundamentally conservative user base that has to have change implemented at a steady rate in order not to alienate it…

…Apple is now poised to go deep across a wide range of content offerings. Unbundling its apps and subscriptions gives it the agility to build sector specific user experiences and marketing campaigns. Separating out podcasts is particularly interesting, as Apple is making the call that they do not belong with music. A stark contrast to Spotify’s approach. Indeed, Spotify may just be approaching its own iTunes moment, with an app that is trying to do too many things for too many different use cases. iTunes just committed hara-kiri to enable Apple to compete better in the digital content marketplace. Spotify may need to do something similar soon.

While astronauts are not considered radiation workers in all countries, they are exposed to 200 times more radiation on the International Space Station than an airline pilot or a radiology nurse.

Radiation is in the Space Station’s spotlight every day. A console at NASA’s mission control in Houston, Texas, is constantly showing space weather information. If a burst of space radiation is detected, teams on Earth can abort a spacewalk, instruct astronauts to move to more shielded areas and even change the altitude of the Station to minimise impact. One of the main recommendations of the topical team is to develop a risk model with the radiation dose limits for crews travelling beyond the International Space Station.

ESA’s flight surgeon and radiologist Ulrich Straube believes that the model should “provide information on the risks that could cause cancer and non-cancer health issues for astronauts going to the Moon and Mars in agreement with all space agencies.”

Recent data from ExoMars Trace Gas Orbiter showed that on a six-month journey to the Red Planet an astronaut could be exposed to at least 60% of the total radiation dose limit recommended for their entire career.

“As it stands today, we can’t go to Mars due to radiation. It would be impossible to meet acceptable dose limits,” reminds Marco.

Shall we tell Elon Musk?
unique link to this extract

2 thoughts on “Start Up No.1,082: Climate emergency to global strife, ethics for facial recognition, more on Apple keyboards, even more of iOS 13, the trouble with Mars, and more”