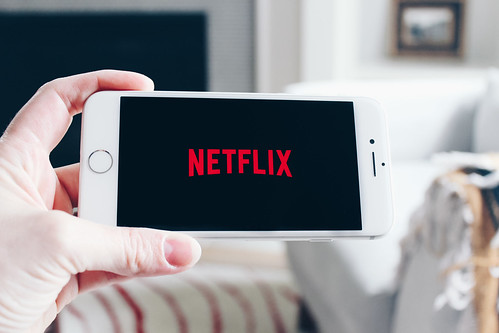 A selection of 9 links for you. Still not fired. I’m @charlesarthur on Twitter. Observations and links welcome.

The OECD may not be able to include employer-based health insurance premiums into its model, but I certainly can. And when I add them into the OECD model, I find that the average American worker has one of the highest compulsory payment rates in the developed world.

For this analysis, I take the information from the OECD’s Taxing Wages model and combine it with data from the Medical Expenditure Panel Survey (MEPS). The MEPS data shows the average premium for employer insurance, broken down by type of coverage (family or single) and payer (employer or employee). By counting those average premiums as NTCPs, we can compute a compulsory payment rate that is comparable to the compulsory payment rates the OECD produces for other countries.

To be clear about what I am doing here, the following graph provides a detailed breakdown of the difference between what we normally think of as “employee taxes” and the OECD concept of “compulsory payments.” This graph is for a married wage-earner with two kids who earns the average wage and has a family insurance plan through their employer. 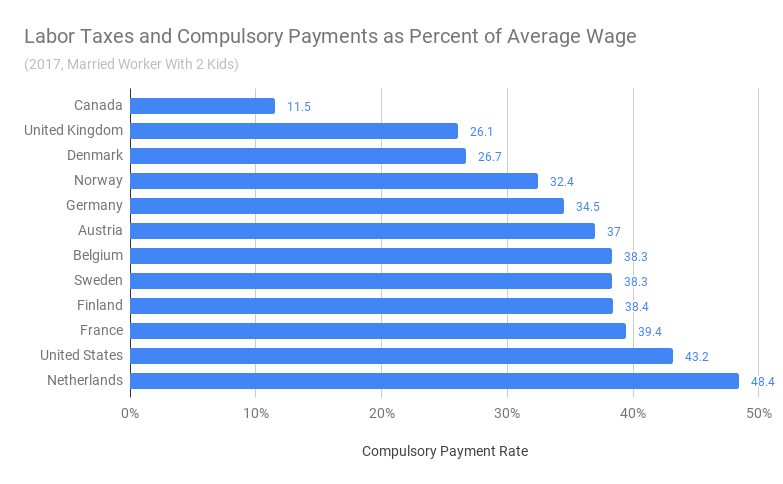 Digital Content Next surveyed a nationally representative sample1 to find out what people expect from Google — and, as with a similar study we conducted last year about Facebook, the results were unsettling.

Our findings show that many of Google’s data practices deviate from consumer expectations. We find it even more significant that consumer’s expectations are at an all-time low even after 2018, a year in which awareness around consumer privacy reached peak heights.

The results of the study are consistent with our Facebook study: People don’t want surveillance advertising. A majority of consumers indicated they don’t expect to be tracked across Google’s services, let alone be tracked across the web in order to make ads more targeted.

Q: Do you expect Google to collect data about a person’s activities on Google platforms (e.g. Android and Chrome) and apps (e.g. Search, YouTube, Maps, Waze)?
YES: 48%NO: 52%

Q: Do you expect Google to track a person’s browsing across the web in order to make ads more targeted?
YES: 43%NO: 57%

Nearly two out of three consumers don’t expect Google to track them across non-Google apps, offline activities from data brokers, or via their location history.

Don’t expect – or perhaps aren’t aware that it’s capable of doing.
unique link to this extract

Internet-loving artist Mario Santamaria has taken advantage of Google’s scheme to take the world into art galleries and ornate buildings all over the world by collecting screenshots of moments where the Google camera catches its own reflection in a mirror.

Ghostly figures interact with the camera in some shots, and in others the machinery is draped with a weird silver cloth – first prize goes to the person who can identify what this cloth actually does. For me this is the best Google-related blog since Jon Rafman’s 9 Eyes and is hopefully a new dawn for simple, spine-tingling projects that linger with you just a smidge longer than you’d like.

These are some weird, weird pictures. Like 2001’s end sequence.
unique link to this extract

Snapchat’s plan is to let other apps embed the best parts of it rather than building their own half-rate copies.

Why reinvent the wheel of Stories, Bitmoji, and ads when you can reuse the original? A high-ranking Snap executive told me on background that this is indeed the strategy. If it’s going to invent these products, and others want something similar, it’s smarter to enable and partly control the Snapchatification than to try to ignore it. Otherwise, Facebook might be the one to platform-tize what Snap inspired everyone to want.

The “Camera company” corrected course and took back control of its destiny this week at its first ever Snap Partner Summit in its hometown of Los Angeles. Now it’s a camera platform thanks to Snap Kit. Its new Story Kit will implant Snapchat Stories into other apps later this year. They can display a more traditional carousel of your friends’ Stories, or lace them into their app in a custom format. Houseparty’s Stories carousel shares what your buddies are up to outside of the group video chat app. Tinder will let you show off your Snapchat Story alongside your photos to seduce potential matches. But the camera stays inside Snapchat, with new options to share out to these App Stories.

This is how Snapchat colonizes the native app ecosystem similarly to how Facebook invaded the web with the Like button.

I’ll admit, I don’t really get this. So we’re going to get the confusing Snapchat interface all over the place? Or Snapchat is going to learn what its interface ought to be?

unique link to this extract

Odds are very good that if you’re reading this, you watch Netflix. Are you paying for Netflix? That’s another story.

The streaming service says it has at least 139 million paid subscribers around the world. But there are decent odds that many more people are watching Netflix and letting someone else pay for it.

As analyst Michael Nathanson points out, Netflix (which has not gone out of its way — at all — to stop password sharers) can view this as a half-empty/half-full situation.

On the plus side, he figures Netflix non-payers currently represent some 8 million users who could eventually be persuaded to pay for Triple Frontier and other Netflix content. On the other hand, if those non-payers never end up paying, they end up reducing Netflix’s growth prospects.

Another very interesting data point from Nathanson’s survey is that Netflix users love stuff like Triple Frontier and Friends and everything else in the company’s huge catalog. But content isn’t the only reason they love Netflix: They love the Netflix product itself — an ad-free, on-demand service that lets you watch whatever you want (assuming Netflix has it), whenever you want, as many times as you want.

Biggest reason people like Netflix? “I like not being interrupted by ads.” US TV is so screwed up. (Also: 55% of Netflix users say they have a personal subscription, 27% a family subscription. That 14% is probably low.)
unique link to this extract

A federal prosecutor argued in court Monday that Yujing Zhang, the Chinese woman arrested trying to enter President Donald Trump’s private Mar-a-Lago club in Palm Beach last month, “lies to everyone she encounters” and said a search of her hotel room uncovered more than $8,000 in cash, as well as a “signal-detector” device used to reveal hidden cameras.

Also uncovered in the search: $7,500 in US hundred-dollar bills and $663 in Chinese currency, in addition to nine USB drives, five SIM cards and other electronics, according to federal prosecutor Rolando Garcia.

Prosecutors are treating the case as a national-security matter and an FBI counterintelligence squad is investigating, sources familiar with the inquiry told the Miami Herald.

Zhang gave conflicting accounts of why she came to Mar-a-Lago on March 30, at one point saying she had been invited to attend a social event…

…Secret Service agent Samuel Ivanovich, who interviewed Zhang on the day of her arrest, testified at the hearing. He stated that when another agent put Zhang’s thumb-drive into his computer, it immediately began to install files, a “very out-of-the-ordinary” event that he had never seen happen before during this kind of analysis. The agent had to immediately stop the analysis to halt any further corruption of his computer, Ivanovich said. The analysis is ongoing but still inconclusive, he testified.

D’oh! You put the thumb drive in your sikrit FBI Computer?! (Among suggested tags for this story: “idiots”.)
unique link to this extract

Hackers working for a surveillance company infected hundreds of people with several malicious Android apps that were hosted on the official Google Play Store for months, Motherboard has learned.

In the past, both government hackers and those working for criminal organizations have uploaded malicious apps to the Play Store. This new case once again highlights the limits of Google’s filters that are intended to prevent malware from slipping onto the Play Store. In this case, more than 20 malicious apps went unnoticed by Google over the course of roughly two years.

Italy’s government subsequently shut down the malware infrastructure and investigated the company behind the spyware.
unique link to this extract

A six-strong team at the University of Rennes:

Although different studies have shown that diseases such as breast or lung cancer are associated with specific bodily odours, no study has yet tested the possibility that epileptic seizures may be reflected in an olfactory profile, probably because there is a large variety of seizure types. The question is whether a “seizure-odour”, that would be transversal to individuals and types of seizures, exists. This would be a pre requisite for potential anticipation, either by electronic systems (e.g., e-noses) or trained dogs.

The aim of the present study therefore was to test whether trained dogs, as demonstrated for cancer or diabetes, may discriminate a general epileptic seizure odor (different from body odours of the same person in other contexts and common to different persons). The results were very clear: all dogs discriminated the seizure odour. The sensitivity and specificity obtained were amongst the highest shown up to now for discrimination of diseases.

You think you could get a machine to do this? Dogs are about 100,000 times more sensitive to such smells than electronic noses. They’re also able to detect colon cancer, and the onset of migraines.

And yet the internet is stuffed with cat videos?
unique link to this extract

Amazon shoppers misled by ‘bundled’ star-ratings and reviews •| The Guardian

• Badly translated or updated Kindle versions of Emma by Jane Austen and Charles Dickens’ Great Expectations, which include references to “moms”, “guys” and “buddies”, but appear to have 4.5-star ratings from hundreds of reviewers.

• A 2017 TV version of Dirty Dancing that shares the 4.5-star reviews of the original film, despite being described by Hollywood Reporter as a “bloated” remake “that nobody asked for and nobody is likely to truly enjoy”.

• Reviews for Wuthering Heights appearing under listings for Jane Eyre, and vice versa.

• Complaints from consumers who said they had been misled when buying books from a variety of authors – from JK Rowling to Shakespeare.

• Star ratings being combined for different products in other departments, from electronics to gardening equipment.

The problems with some reviews seem to go back years, with complaints from readers pointing out they were appearing under the wrong works and editions since at least 2014.

unique link to this extract

1 thought on “Start Up No.1,041: the real US tax rate (it’s high!), when Google sees itself, the Mar-a-Lago incursion, dogs can smell epilepsy, and more”