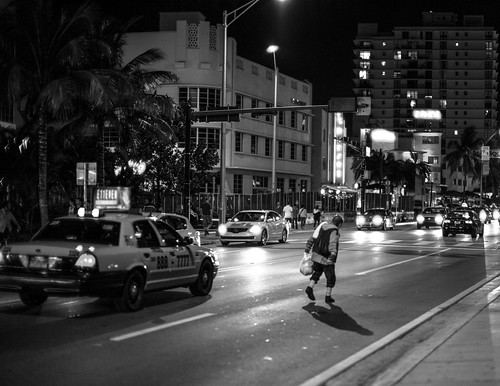 Will a self-driving car see the person, or just the bag? Photo by Paolo Gamba on Flickr.

A selection of 7 links for you. Tuesday! Could be worse. I’m @charlesarthur on Twitter. Observations and links welcome.

Uber has determined that the likely cause of a fatal collision involving one of its prototype self-driving cars in Arizona in March was a problem with the software that decides how the car should react to objects it detects, according to two people briefed about the matter.

The car’s sensors detected the pedestrian, who was crossing the street with a bicycle, but Uber’s software decided it didn’t need to react right away. That’s a result of how the software was tuned. Like other autonomous vehicle systems, Uber’s software has the ability to ignore “false positives,” or objects in its path that wouldn’t actually be a problem for the vehicle, such as a plastic bag floating over a road. In this case, Uber executives believe the company’s system was tuned so that it reacted less to such objects. But the tuning went too far, and the car didn’t react fast enough, one of these people said…

…Uber’s findings may cause other self-driving car developers to examine the kind of software tuning they do to deal with potential false positives. The entire industry has been wondering whether the accident was caused by issues that might also apply to them. Aside from Uber, Alphabet’s Waymo and dozens of companies ranging from General Motors’ Cruise to startups like Aurora Innovation and Voyage are testing self-driving cars. Developers such as Nvidia and Toyota said they temporarily suspended testing of autonomous vehicle prototypes in the wake of the crash.

In the collision investigation, Uber found that a vital piece of the self-driving car was likely working properly: the “perception” software, which combines data from the car’s cameras, lidar and radars to recognize and “label” objects around it. In this case, the software is believed to have seen the objects. The problem was what the broader system chose to do with that information.

Hell of a scoop by Efrati. And how do you get around this problem for self-driving cars? Plastic bags and other opaque debris are going to be a constant feature of roads.
link to this extract

The leaks, from a group called LA Confidential, have led since March to a succession of embarrassing stories on Broidy’s attempts to trade his proximity to the president for his benefit and that of wealthy clients in Malaysia, the United Arab Emirates, and elsewhere. (Broidy also admitted paying $1.6m to a former Playboy Playmate who had an affair with him and became pregnant, a deal negotiated by Trump attorney Michael Cohen.) American national security officials concluded that in 2016 the Democrats were hacked by Russian intelligence operatives trying to tip the scales of the U.S. election. Broidy believes he was targeted for political motives as well—in his case, by UAE rival Qatar. He claims Qatar was retaliating against him because he has spoken out about what he sees as that country’s support for terrorism and its friendliness with Iran. If Qatar were behind the hack, it would be the latest example of a foreign power trying to influence domestic American politics by exposing the secrets of the political elite.

Broidy allowed Bloomberg to talk with security experts working for him as part of an effort to focus more attention on the hack (and less, presumably, on the leaks). In March, he filed a lawsuit in California accusing Qatar of orchestrating the attack. The experts confirmed that the hackers probably got away with tens of thousands of emails and other documents, a cache they could continue to dribble out for months. “It is a horrible experience to have business and personal information stolen and disseminated,” Broidy told Bloomberg in an email. “This attack on our privacy has taken a great emotional toll on me, my family, and my employees.”…

…The hackers got access to emails from Broidy and five of his employees because they all used the same password, his security team confirmed.

Brody was hacked via his wife, who fell for the same Gmail phishing attack that was used to break into Clinton campaign chairman John Podesta’s personal Gmail inbox – because he (and she) didn’t have two-factor authentication enabled. (Although a well-coordinated state hacking attack could break that too.)

As it happens, I look in detail at how Podesta was hacked, and how the campaign’s security reacted, in a full chapter in my new book Cyber Wars. Available now in the UK, and physically on May 28 in the US.
link to this extract

Welcome to Day Zero of Google I/O 2018. The keynote might be tomorrow, but that isn’t stopping one of the more interesting products from being announced a day ahead of time. Google and JBL have built the JBL Link Bar, a soundbar that combines the functionality of Android TV with Google Home. Your TV gets upgraded sound, the Android TV interface and apps, and always-on Google Home functionality, all in a compact soundbar package that can be wall-mounted.

Android TV devices have had the Google Assistant since 2017, and while this seems to have the usual Android TV Assistant commands, it also works as a smart speaker. It has the always-on “OK Google” hotword and four front lights, just like a Google Home. You can tell it to turn the TV on, all without touching a thing.

Not sure why you’d want a soundbar to be a smart speaker; it’s meant to be subservient to the TV, surely.
link to this extract

That new memory smell: tech can tell if your Flash is new or recycled • IEEE Spectrum

A flash memory cell is like an ordinary transistor, it has a source and a drain and a channel through which current flows under the control of voltage on the gate electrode. The difference is that the gate is split into several layers—the control gate, the blocking oxide, the floating gate, and the tunneling oxide.  Voltage on the control gate causes electrons to tunnel through that bottom oxide and get stuck inside the floating gate. This charge or its absence is the stored bit. It alters how much voltage you need to turn the transistor on in a way that you can easily measure. Erasing the bit is done by reversing the voltage and driving the charge out of the floating gate.

Ray and his team took advantage of the rather high voltages—about plus or minus 20 volts—needed to program and erase flash. The more you program and erase a cell, the more defects will accumulate in the oxide, he explains. These defects lead to an increase in the amount of current that leaks through the transistor when it’s supposed to be off, and it also slows down the rate at which charge moves through the device. These effects show up as a slowdown in the memory’s erase time. They examined other metrics, but “we found that slower erase is the best metric to get [a chip’s] age.”

In research reported this week at the IEEE International Symposium on Hardware Oriented Security and Trust, in Washington, D.C., the Alabama engineers’ erase-time technique was able to identify recycled flash with as little as 3% usage with 100% confidence.

OK, but as it says, Flash is designed to last 10 years or more. Is 3% really enough to make a difference?
link to this extract

“We pioneered an amazing, innovative business model underpinned by courage and trust,” founder Lei Jun said in an open letter accompanying its offer document Thursday in which he reiterated a pledge to cap hardware margins in favor of making money via services.

What surprised me most is how dependent this business is on advertising, which accounted for 57% of the category’s revenue last year. (Online games is the other major component.)

“We use our proprietary technologies and big data analytical capabilities to offer comprehensive and innovative services to our business partners and users.”

When you remember that “business partners” means advertisers, you start to understand that Xiaomi isn’t a rip-off of Apple Inc., as has been suggested, but is mimicking Facebook Inc.

Here’s how it works: Xiaomi sells a smartphone at near-cost, including its MIUI mobile interface. Through that, Xiaomi tracks your usage and learns what you might be interested in. It then starts suggesting apps, some of which will be Xiaomi-developed. Once installed, the company then has an ad-serving platform right in front of your eyes.

Researchers, who analysed the Facebook activities of a thousand Isil supporters in 96 countries, discovered users with radical Islamist sympathies were routinely introduced to one another through the popular ‘suggested friends’ feature.

The site automatically collects a vast amount of personal information about its users, which is then used to target advertisements and also direct people towards others on the network they might wish to connect with.

But without effective checks on what information is being shared, terrorists are able to exploit the site to contact and communicate with sympathisers and supporters.

The extent to which the ‘suggested friend’ feature is helping Isil members on Facebook is highlighted in a new study, the findings of which will be published later this month in an extensive report by the Counter Extremism Project a non profit that has called on tech companies to do more to remove known extremist and terrorist material online.

Gregory Waters, one of the authors of the report, described how he was bombarded by suggestions for pro-Isil friends, after making contact with one active extremist on the site.

Even more concerning was the response his fellow researcher, Robert Postings, got when he clicked on several non-extremist news pages about an Islamist uprising in the Philippines. Within hours he had been inundated with friend suggestions for dozens of extremists based in that region.

That’s the “suggested friends” algorithm working exactly as it’s designed to. Unfortunately…
link to this extract

Mr. Cohen’s businesses are private entities, making it difficult to get a full picture of their finances and operations. But a New York Times review of thousands of pages of public records, and interviews with bankers, lawyers and businessmen who have interacted with Mr. Cohen, reveal the degree to which he has often operated in the backwaters of the financial and legal worlds.

While he has not been charged with a crime, many of his associates have faced either criminal charges or stiff regulatory penalties. That includes partners in the taxi business, doctors for whom he helped establish medical clinics and lawyers with whom he worked.

He has spent much of his personal and professional life with immigrants from Russia and Ukraine. His father-in-law, who helped establish him in the taxi business, was born in Ukraine, as was one of Mr. Cohen’s partners in that industry. Another partner was Russian. And Mr. Cohen used his connections in the region when scouting business opportunities for Mr. Trump in former Soviet republics.

More recently, Mr. Cohen and his father-in-law lent more than $25m to a Ukrainian businessman who has a checkered financial record and a history of defaulting on loans. And Mr. Cohen long held a small stake in his uncle’s catering hall, which was frequented by Russian and Italian mobsters.

In addition to his legal and taxi businesses, Mr. Cohen has had a seemingly charmed touch as a real estate investor. On one day in 2014, he sold four buildings in Manhattan for $32 million, entirely in cash. That was nearly three times what he paid for them no more than three years earlier.

The way in which this never says “money laundering” is impressive.
link to this extract