“Your Mac. On top”, according to the caption. But it might also be a source of confusion at the Genius Bar. Photo by tua ulamac on Flickr.

I wrote a while back about the problems I had with my 2012 retina MacBook Pro, and its strange shutdowns – which I suspected, but couldn’t absolutely prove, were due to the graphics card problem that these models have been known to suffer from: when the discrete graphics card was activated, there was a chance it would go completely off the rails.

Finally it shut down and didn’t seem to want to start. At that point, I turned over to using the iPad Pro full-time, which is another story. You might find it entertaining.

The only way to absolutely prove that the problem with the computer was the graphics card, of course, was to take it to a Genius Bar. After eventually getting an appointment (the Mac Geniuses are rare, compared to the iPhone/iPad Geniuses), I turned up with the rMBP which I’d left for dead.

“It was dead, honest”

Of course the first thing it did when the guy plugged it in was to start up and happily proceed to the login screen. Talk about embarrassing. I logged in. All seemed OK. But we were there for a Genius appointment, so we were going to do that. He restarted, booted from a network drive which has Apple’s Mac OS9-style hardware test, and gave it a once-over. 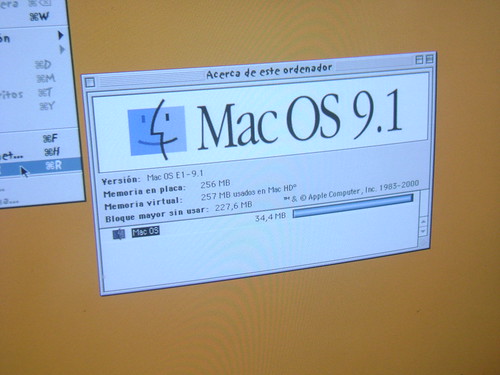 Mac OS 9: if you take your Mac to get Geniused, you’ll probably see a screen that looks something like this. Photo by Rodrigo Vera on Flickr.

(That’s OS9. It’s not what my machine looked like, except for how the progress bar looked.)

The checks all looked OK, except for the VST – video system test. That didn’t work – it said it couldn’t find the relevant drivers (which it looked for on the hard drive). So he ran Disk Utility off the network drive to see whether there was something wrong with the hard drive. (rMBPs from that time all have SSDs.).

At this point things got very confusing. Disk Utility showed that there were two drives – an SSD with 500GB capacity, and another also with 500GB capacity. One of them seemed to be called Macintosh HD, and the other seemed to have partitions such as “private” and “mem”.

Except that the rMBP only had a 500GB SSD. How had it got two? “Have you got a Fusion drive in here?” the Genius asked.

Me (cooperative citizen pulled over by policeman): “Er.. no.”

At this point the Genius said he suspected there was something wrong with my SSD. So he restarted the machine, held down the key to boot from a network drive, whizzed over to the one marked 10.12 and started up. Could Disk Utility read my drive now? No, it couldn’t.

“Do you have this backed up?” he asked, indicating the computer. I sure did – SuperDuper clones, and a Time Machine backup. “I think we might need to reinstall the operating system.”

(This is the point at which the smart readers are saying “ohhhh” because they’ve spotted the mistake that both he and I made.)

“You backed it up, of course?”

So yes, it was time to wipe the drive and reinstall everything. Thankfully the Wi-Fi in Apple Stores is really fast, so you can get your OS reinstalled quickly. Everything seemed to be going fine. I hung around, knowing that all the important stuff was backed up either in the cloud or on the backup disk. For fun, because I knew that it would take forever on our super-slow broadband, I decided to re-download my iCloud Photo library. All 16,800 or so of them. Look, the Wi-Fi’s free.

The photo download was fast. Everything seemed to be fine. The machine wasn’t crashing. I was now starting to question myself: was it really just something scuzzy on the hard drive?

Then, fatefully, I tried to look at a photo that had downloaded at full resolution. Click on the photo, it begins to fill the screen, and––

BAM. The machine shut down, just like that. It had been nothing to do with the hard drive or the OS. As I thought, whenever the discrete graphics card was called on to do something, it knocked the machine out.

Some more consultation, and another Genius. More network booting, and this time the video test seemed to indicate that, ehhhh, the video card might not be in good shape.

At this point I suddenly realised why the network-booted versions hadn’t been able to run the video card drivers from my hard drive, and now they could. The network drives were formatted with HFS+, which is the file system Apple has been using on Mac OSX (and MacOS) for a couple of decades. That’s why the version number on the network drive was 10.12 – the file format for Sierra.

13 is the magic number (it makes stuff disappear)

But I had brought the machine in running 10.13 – High Sierra – which uses the APFS filesystem. APFS brings a number of benefits, such as “instant” file copying, disk space saving, better encryption performance, inherent SSD trim, and faster boot times, but it isn’t back-compatible with HFS+; if you boot from an HFS+ drive, it won’t be able to read a file encoded in APFS. (APFS can work read HFS+, of course.)

That, of course, is why the Genius’s HFS+-encoded 10.12 network drive couldn’t understand my APFS-encoded SSD. So I’d wiped the hard drive for nothing. If there had been an APFS-encoded network drive, it could have booted up the machine and run the video test and found the problem. (Well, probably.)

Anyhow – they took the machine in and replaced the entire logic board, and they did it under the guarantee (even though that had run out a little while earlier). In my case, the problem had gotten much worse after I got the battery replaced in November 2017; possibly doing that disturbed the logic board and the card’s connections, and led to a cascade of trouble.

When I got home, there was an email waiting for me from Apple – the standard “how did we do?” questionnaire. I had by then realised what had happened, and so I filled it in, explaining that they needed to update their procedures to take High Sierra/APFS users into account. I got a followup phone call from the Apple Store where I’d taken my machine, and they sounded interested and honestly grateful for the feedback. So this has possibly already been implemented. (I mean, you’d hope, right?)

So what’s the solution? Apple obviously needs to implement some network drives formatted with APFS. Which might mean an overhaul of how it does some stuff in-store; but it should expect that there are going to be more and more people coming in with machines that are APFS-encoded.

As for me – I came home with a machine that was fixed; it’s got a new battery (since November) and now a totally new logic board. What’s really nice is how clean the machine is. All the dust and crumbs and fingermarks are blown and cleaned off. It’s like getting a brand-new machine. (I think they may even have replaced my letter “A”, which had taken a lot of punishment over the past five and a bit years.)

Getting the hard drive back to status quo ante took an afternoon or so. The one thing that’s not working? Can’t get my old Time Machine drive (which is of course HFS+ because Time Machine hasn’t moved forward to APFS yet) to believe that the new machine is essentially the same one. If I try to run a backup, it thinks for 12 hours or so (it’s not an SSD backup drive) and then declares that it’s going to need vast tracts of storage. I’ve tried command-line invocations (yes, I’ve read the manual for tmutil) without success. Strangely, I am apparently able to restore files from the drive; I just can’t put fresh ones onto it.

But that’s not a huge problem, because I have hardly any files that live exclusively on my Mac – doing so seems like a liability, and a self-inflicted handicap in these days of cloud synchronisation via iCloud and Dropbox – and the very few that there are can be handled by SuperDuper!, which does bootable backups (yes, even of APFS).

Back to my Mac

Oh sure, you’re wondering: what’s it like being back on the Mac after weeks exclusively on the iPad? Three key things: it’s damn heavy; I can type a bit faster; the screen (15in) is really big, which makes it feel like all the fonts are gigantic and yet can fit stuff onto the screen.

More generally, I find it easier to get distracted on the Mac. There are pings from emails, there’s the time spent waiting for the newsreader to load articles or web pages to load, during which one may decide to go and look at another app (email, Twitter) and get lost in that, breaking the flow of whatever I was doing before. I’m much more focussed when working on the iPad – I can go most of a day without looking at email, which is how I like things to be, unless it’s VIP email, in which case I get pinged. Also, I don’t get spinning beachballs on the iPad. Sure, it’s newer and it’s doing less simultaneous processing, but even so, as a user interface experience, Beachballs Are Bad, and one notices them even more when returning from a platform where you never, ever see them.

But anyhow, if your Mac does break down, and you’re on High Sierra, make sure to tell them if you’re on APFS when they come to the diagnostics. And if they tell you that you need to wipe your drive and start again, just make sure to ask them: “are you certain it’s that, or could it be your network drive can’t read the APFS file system on my machine?” It can’t hurt to ask.

11 thoughts on “Beware taking your Mac running High Sierra to the Genius Bar: APFS might surprise them”