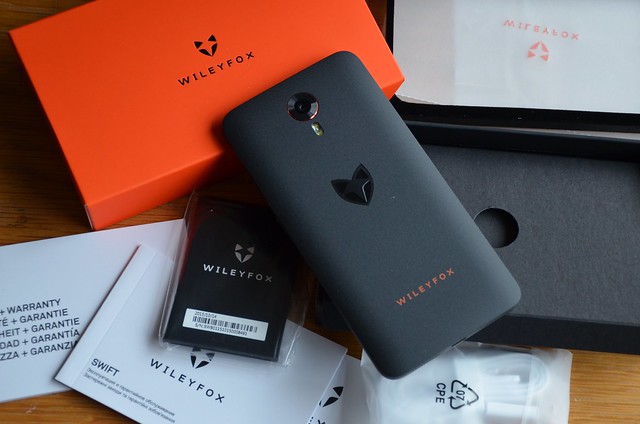 British phone OEM Wileyfox has gone into administration; its future is very unclear. Photo by Richard Lewis on Flickr.

»You can sign up to receive each day’s Start Up post by email (arriving at about 0800GMT each weekday). You’ll need to click a confirmation link, so no spam.«

“All of Google’s investments in machine learning and AI, they can very clearly benefit Nest products. It just makes sense to be developing them together,” Osterloh said in an interview Tuesday, which included Fawaz and took place in a meeting room designed to look like a home, complete with a kitchen and a washer-dryer setup. “It’s the natural thing to evolve to.”

Nest’s brand, known for its 2011 internet-connected thermostat, isn’t going anywhere, Osterloh and Fawaz said. In fact, the two drilled home the message that the reunion of the teams will “supercharge Nest’s mission,” as Fawaz put it. They used the word “supercharge” at least five times during our 40-minute interview at Nest headquarters in Palo Alto, California.

Fawaz said Nest has shipped more than 11 million products since its first thermostat went on sale in 2011. Since it’s been part of “Other Bets,” Alphabet doesn’t call out how much money Nest makes or loses.

Google is so, so serious about incorporating machine learning into everything it does. Don’t underestimate how far it could go.
link to this extract

Snapchat is coming back up with its Q4 revenue soaring above Wall Street expectation but, as far as its Spectacles go, they were little more than a footnote on the company results.

Snap Inc made $8m in Spectacles revenue in Q1 of 2017; a fairly modest taking for a company of its size, but Snap said that it expect sales to be “substantially down year-over-year” in Q1 of this year and sequentially. Further to that, on a call with investors, the company said it doesn’t plan to “annualize” the product.

Translation: it’s pretty much done with Specs – don’t expect a new line for 2018.

Snap was overly confident in Spectacles, which cost the company $40m in excess inventory. In November it opened a storefront in London to shift some of those glasses, but this was only ever scheduled to remain until early 2018, Snap told us. The company has now shut down its Venice Beach store.

From the company’s S-1 filing for IPO: “Snap is a spectacles company.”
link to this extract

South Korea’s spy agency has begun investigating the possibility that North Korean hackers orchestrated the theft of about $500m worth of digital coins from Japanese cryptocurrency exchange Coincheck Inc., said a lawmaker who attended a meeting with the head of the intelligence service.

The National Intelligence Service is investigating last month’s incident – one of the largest cryptocurrency heists in history – based on similarities with past cases associated with its northern neighbor’s cyber-attack apparatus, said the lawmaker, who didn’t want to be identified because of the sensitivity of the information. The South Korean agency is now examining the incident with cooperation from international authorities, the lawmaker added.

Cybersecurity experts say North Korea has master-minded a growing number of crypto-heists in past years, as Kim Jong Un’s hermit regime seeks capital to bankroll its nuclear weapons program and circumvent tough international sanctions. South Korean investigators are already said to be looking into Pyongyang’s involvement in the hack of Seoul-based exchange Youbit, which collapsed in December. In a recent twist, cyber-sleuths say the regime’s attacks have expanded to include hijacking computers to mine digital currencies – particularly hard-to-trace Monero.

Russian trolls posed as black activists on Tumblr and generated hundreds of thousands of interactions for content that ranged from calling Hillary Clinton a “monster” to supporting Bernie Sanders and decrying racial injustice and police violence in the US, according to new findings from researcher Jonathan Albright and BuzzFeed News.

While Facebook and Twitter continue to face intense public and congressional pressure over the activity from trolls working for the Russian Internet Research Agency, Tumblr has somehow managed to escape scrutiny. But the blogging platform was in fact home to a powerful, largely unrevealed network of Russian trolls focused on black issues and activism.

“The evidence we’ve collected shows a highly engaged and far-reaching Tumblr propaganda-op targeting mostly teenage and twenty-something African Americans. This appears to have been part of an ongoing campaign since early 2015,” said Albright, research director of the Tow Center for Digital Journalism at Columbia University.

Tumblr and its parent company, Oath, did not reply to multiple emails with questions from BuzzFeed News. Despite not responding, tracking software shows the emails were opened more than 290 times, and the included links were clicked more than 70 times.

BuzzFeed News also did not receive a response from the office of Sen. Mark Warner, the Democratic chair of the Senate Intelligence Committee, which is investigating Russian interference in the 2016 election.

That’s a lot of clicking and sharing of those questions.
link to this extract

With just one look, officers are able to identify a person. The technology is being used to hunt down fugitives and spot fake IDs.
The special glasses are being used by Zhengzhou railway police in central China’s Henan province – a major transportation hub for the #SpringFestivalRush, which kicked off on February 1. Officers equipped with the high-tech glasses are stationed at four entrances of the railway station.

As of February 5, the face scanning glasses have helped identity seven people suspected of human trafficking and hit-and-run accidents, as well as another 26 people using fake IDs.

No way to verify the claims about how wonderful they are, and who has been caught. The security will surely be of the government, not the public; imagine it being used against ethnic minorities. And of course there’s no consent.
link to this extract

Following on from yesterday’s chart looking at smart home products in the US, today we put a spotlight on how levels of income influence interest in this new technology.

Across all smart home devices, consumer appetite is much more pronounced in the top 25% for income. Amazon and Google have looked to broaden smart home engagement with holiday discounts on their Echo and Home devices, but it’s still the affluent early adopters in the top income bracket who are much more likely to be interested in smart assistants.

Marketers would benefit from portraying such products with a use-case as affordable and necessary additions to consumers’ daily routines, rather than luxury gadgets. The price of entry to a smart home experience may be lower than ever, but the perception that smart home products are only for a select group needs to shift as well.

These devices are hardly necessities, in stark contrast (these days) to mobile phones. So they’re discretionary purchases, even when they’re super-cheap.
link to this extract

“Facebook is Mark, and Mark is Facebook,” McGinn says. “Mark has 60% voting rights for Facebook. So you have one individual, 33 years old, who has basically full control of the experience of 2 billion people around the world. That’s unprecedented. Even the president of the United States has checks and balances. At Facebook, it’s really this one person.”

McGinn declined to discuss the results of his polling at Facebook, saying nondisclosure agreements prevented him from doing so. But he said he decided to leave the company after only six months after coming to believe that Facebook had a negative effect on the world.

“I joined Facebook hoping to have an impact from the inside,” he says. “I thought, here’s this huge machine that has a tremendous influence on society, and there’s nothing I can do as an outsider. But if I join the company, and I’m regularly taking the pulse of Americans to Mark, maybe, just maybe that could change the way the company does business. I worked there for six months and I realized that even on the inside, I was not going to be able to change the way that the company does business. I couldn’t change the values. I couldn’t change the culture. I was probably far too optimistic.”

After McGinn left Facebook, he founded a new market research firm named Honest Data. On January 27th, he posted the results of a poll he had conducted regarding opinions of Facebook. The poll, which surveyed 2,000 Americans using Google Consumer Surveys, asked respondents to evaluate a list of companies and mark which ones “are having a negative impact on society.” Among tech companies, 32% of Americans said Facebook is harmful. A separate survey, which placed Facebook among other large brands including Walmart, McDonald’s, and Marlboro, found that 27% said it is harmful.

In November of 2017, Wileyfox revealed they’d be going ahead with the Windows 10 Mobile smartphone they’d revealed at IFA 2017 (earlier that year.) In December of 2017, Wileyfox revealed an Add-X ad-subsidized device. That contained a promotional newsfeed in the same vein as Amazon’s Prime Exclusive phone lineup. Ironically today, the same day this article is set to be released, Amazon did away with the lockscreen ads on their Prime Exclusive phones altogether, and Wileyfox confirmed that they were going out of business.

The former Wileyfox official Wileyfox-Jack confirmed on Reddit this week that the brand was in Administration. That’s the British equivalent of going bankrupt. [No, it isn’t exactly – CA] In this case, administration means the administrators on the case will attempt to save the company or find a buyer – but more than likely it’ll go under completely.

UPDATE: SSS reported late this morning that Turing Robotics (TRI) informed them that they’d be setting up a new company in Salo. It’s not immediately clear how this all came to be – and it is a strange affair indeed.

Wileyfox hasn’t gone bankrupt, nor is it insolvent; it’s in administration, which gives it temporary protection from creditors. It might struggle though to get out of this. A pity – it was a small British company trying to find a profitable niche.
link to this extract

Bitcoin will someday be worth as much as 40 times its current value, says Cameron Winklevoss • CNBC

The cryptocurrency had a market capitalization or value of $135 billion on Wednesday, according to CoinDesk data, after the price recovered following a violent sell-off. Forty times this would be over $5 trillion.

Cameron Winklevoss made the call after comparing bitcoin to gold during a CNBC-hosted chat at the Milken Institute’s MENA Summit.

“Taking bitcoin in isolation … we believe bitcoin disrupts gold. We think it’s a better gold if you look at the properties of money. And what makes gold gold? Scarcity. Bitcoin is actually fixed in supply so it’s better than scarce … it’s more portable, its fungible, it’s more durable. Its sort of equals a better gold across the board,” Winklevoss told CNBC.

“So if you look at a $100 billion market cap today, now last week it might have been more like 200, so it’s actually a buying opportunity, we think that there’s a potential appreciation of 30 to 40 times because you look at the gold market today, it’s a $7 trillion market. And so a lot of people are starting to see that, they recognize the store of value properties. So we think regardless of the price moves in the last few weeks, it’s still a very underappreciated asset.”

Except gold has actual uses, which is part of what makes it valuable. Notable though that he isn’t calling bitcoin a currency – he sees it as a speculative asset.
link to this extract