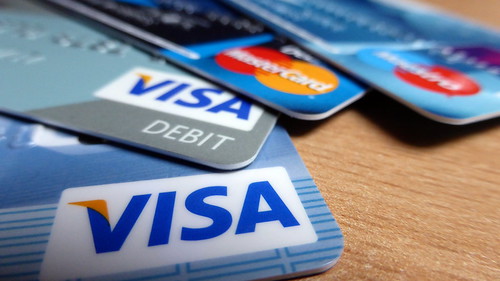 A selection of 9 links for you. How about that? I’m @charlesarthur on Twitter. Observations and links welcome.

two experts who advised the government on its plans have expressed reservations about both how quickly the scheme is being rolled out and its wider implications.

“It seems to me to be a very premature date,” commented Dr Victoria Nash, lead author of a report commissioned in the run-up to the law being drafted. “The idea you can get a regulatory body up and running in that timeframe seems extraordinary to me. And while I don’t have a problem with asking these companies to act responsibly, I don’t see it as a solution to stopping minors seeing pornography.”

This, she explained, was because the act does not tackle the fact that services including Twitter and Tumblr contain hardcore pornography but will not be required to introduce age-checks. Nor, she added, would teens be prevented from sharing copied photos and clips among themselves.
“It may make it harder for children to stumble across pornography, especially in the younger age range, but it will do nothing to stop determined teenagers,” Dr Nash concluded.

One cyber-security expert on the same advisory panel was more critical. “The timeline is unrealistic – but beyond that, this is one of the worst proposals I have seen on digital strategy,” said Dr Joss Wright from the Oxford Internet Institute. “There are hundreds of thousands of websites where this material can be accessed and you are not going to catch all of those. There’s privacy issues – you’re requiring people to effectively announce the fact they are looking at this material to the credit card authorities.

Beijing, like many rapidly growing cities, now has some formidable traffic problems. (We budgeted two hours between every meeting and found this left very little cushion for on-time arrivals.) But there is another problem with all those cars – where to put them. In recent years, we have watched with mounting horror the difficulties of parking in Beijing. We visited a shopping district in an office park far from the center of the city, and at lunch time cars were double and triple parked the length of the entire street.

If you scan the Internet you can find a whole literature about the amount of space given over to parking. Multi-car garages in the US can occupy a third of the house’s square footage. Add up the amount of land set aside for parking lots and curb parking, and then the necessary buffers, it is a staggering amount of space. In the US our cities are now planned for parking (except in San Francisco which has adopted a deliberate plan to reduce the amount of parking, which is a whole other topic). If cars were autonomous, we could radically reshape the way we build cities. We could make cities denser without making them feel more crowed. Walking around a suburb could become realistic. If we want to get fully Utopian, we could imagine the health benefits from this alone. A more quantitative approach would be to calculate the real estate savings alone from halving parking, an amount that is probably measured in hundreds of billions of dollars.

We readily admit that this is a bit of fantastical, but it is not wholly unrealistic.

Placeholder text within a form field makes it difficult for people to remember what information belongs in a field, and to check for and fix errors. It also poses additional burdens for users with visual and cognitive impairments…

Some forms replace field labels with in-field placeholder text to reduce clutter on the page, or to shorten the length of the form. While this approach is based on good intentions, our research shows that it has many negative consequences.

Worst: In this example, placeholder text is used instead of a label.

Below are 7 main reasons why placeholders should not be used as replacements for field labels.

They’re all good ones. You’ll recognise them when you see them.
link to this extract

When we make decisions about how much user surveillance we’re going to allow on a platform, we’re making a political decision.

The standings so far.

News sites want to go to Congress, to get permission to play for third place in their own business? You want permission to bring fewer resources and less experience to a surveillance marketing game that the Internet companies are already losing?

Brutal, but true.
link to this extract

My week at SoundCloud • Hacker Noon

Matthew Liam Healy started work in Berlin on the Monday:

Outside of the on-boarding, I was getting to know my team. Every single one of them was as friendly and helpful as you could possibly hope for. After three days with them I was already convinced this could be amongst the best teams I’ve ever worked on.

My formal induction into the team consisted of a few hours pair programming each day, and it was in the middle of one of these pairing sessions, on Thursday, that we got an email from Alexander Ljung, SoundCloud’s CEO. There would be a company “all hands” meeting at 4pm.
There had been a lot of jokes in my first week about potential acquisitions. Everyone’s heard the Spotify rumour, the Google rumour, and, more recently, the Deezer rumour. I also heard jokes about Disney, about IBM, and about Apple. So when the meeting was called, we all assumed we knew what was going on. SoundCloud was being acquired.

I had actually been through an acquisition before, when an agency I had just started working for was bought by its biggest client. It had gone pretty well for me then, and I was excited to see what might happen now.

So we made a few jokes, and kept on coding. I did a few TDD loops in an attempt to tackle a crash bug that had just been found in an alpha release. Basically things continued as normal until the meeting.

The minute Alex said the business was pivoting to focus more on creators, I knew I was gone. I was hired to the iOS Listening team, to work on features for listeners. Plus, German law concerning layoffs has something of a last-in-first-0ut flavour to it. He said those affected would receive meeting invites, and then not two minutes later the meeting invite popped up on my Apple Watch.

I love my Watch, but it’s not a great way to find out you’re losing your job.

Very strange how it was hiring even as it was about to chop a ton of jobs. Or was it trying to get a lot of people on board ahead of an expected acquisition so it could seem to be cutting effectively to its prospective acquirers?
link to this extract

BP is aiming to raise its data storage capacity from about 1 petabyte — equivalent to 20m four-drawer filing cabinets filled with documents — to 6PB by 2020 as the group integrates machine learning and artificial intelligence into its operations.

More than 99% of oil and gas wells operated by BP around the world are equipped with sensors that produce a constant flood of real-time data on production performance as well as the condition of infrastructure, Mr Hashmi said. This information is fed into a cloud-based storage system which allows BP engineers anywhere in the world to access the information…

…Reliability of BP’s exploration and production facilities — measuring factors such as time lost to production stoppages — has increased from 88% in 2012 to 95% last year and Mr Hashmi said technology was the main reason. This had contributed to $7bn of annual cost savings by BP since 2014.

Among the innovations has been a “digital twin” system that allows BP engineers to test maintenance procedures and other critical engineering work using virtual reality before carrying out the work on real facilities.

In June, BP invested $20m in a Californian start-up called Beyond Limits, which is aiming to commercialise artificial intelligence technology developed for deep space missions by Nasa. Mr Hashmi said machine learning would allow BP to use accumulated data from drilling operations to improve speed and success rates in future wells.

“Digital twins” is an interesting twist. Basically scenario planning, but getting better and better.
link to this extract

We’re constantly working to secure our users and their data. Earlier this year, we detailed some of our latest anti-phishing tools and rolled-out developer-focused updates to our app publishing processes, risk assessment systems, and user-facing consent pages. Most recently, we introduced OAuth apps whitelisting in G Suite to enable admins to choose exactly which third-party apps can access user data.

Over the past few months, we’ve required that some new web applications go through a verification process prior to launch based upon a dynamic risk assessment.

This is in response to the Google Docs worm back in March, which was actually phishing for your email and password by being an application called “Google Docs”.

Google’s going to have a big “unverified app” screen, as above. Stable door and horses, in some instances.
link to this extract

The new Echo will be both shorter and slimmer than the original, almost as if it were three or four Echo Dots stacked on top of each other, our source claims. Amazon is also softening its design with rounded edges and a cloth-like covering, rather than the current Echo’s plastic shell and flat ends. And yes, it should sound better, too. The company is packing in several tweeters this time around, instead of just relying on one large tweeter and a woofer (for low end). The HomePod, in comparison, features seven tweeters, which is big reason why it sounded better than the Sonos Play:3 and the Echo in our brief demo.

Amazon is also improving the new Echo’s microphone technology, though it’s unclear how it’s doing so. The current model features an array of seven far-field mics, while the HomePod has six and Google Home has two. Amazon might be able to make improvements to the software and acoustic modeling — that’s how Google’s speaker manages to pick up your commands with far fewer mics. But given that Amazon helped to pioneer the use of far-field microphones in a home speaker, I wouldn’t be surprised if it managed to cram in some new hardware innovations.

Notable how the Echo, which is in millions of homes (Neil Cybart estimates it could have sold as many as 10m in 2016, and heading for 15m this year), is being compared to the HomePod, which isn’t even on sale yet. Brand power?
link to this extract

What If Big Oil’s bet on gas is wrong? • Bloomberg

The trends that are undercutting optimism about the global gas outlook are already playing out in Europe. Natural gas demand remains well below a 2010 peak, as greater energy efficiency, rapid adoption of renewables and resilient coal consumption cut into its market share. 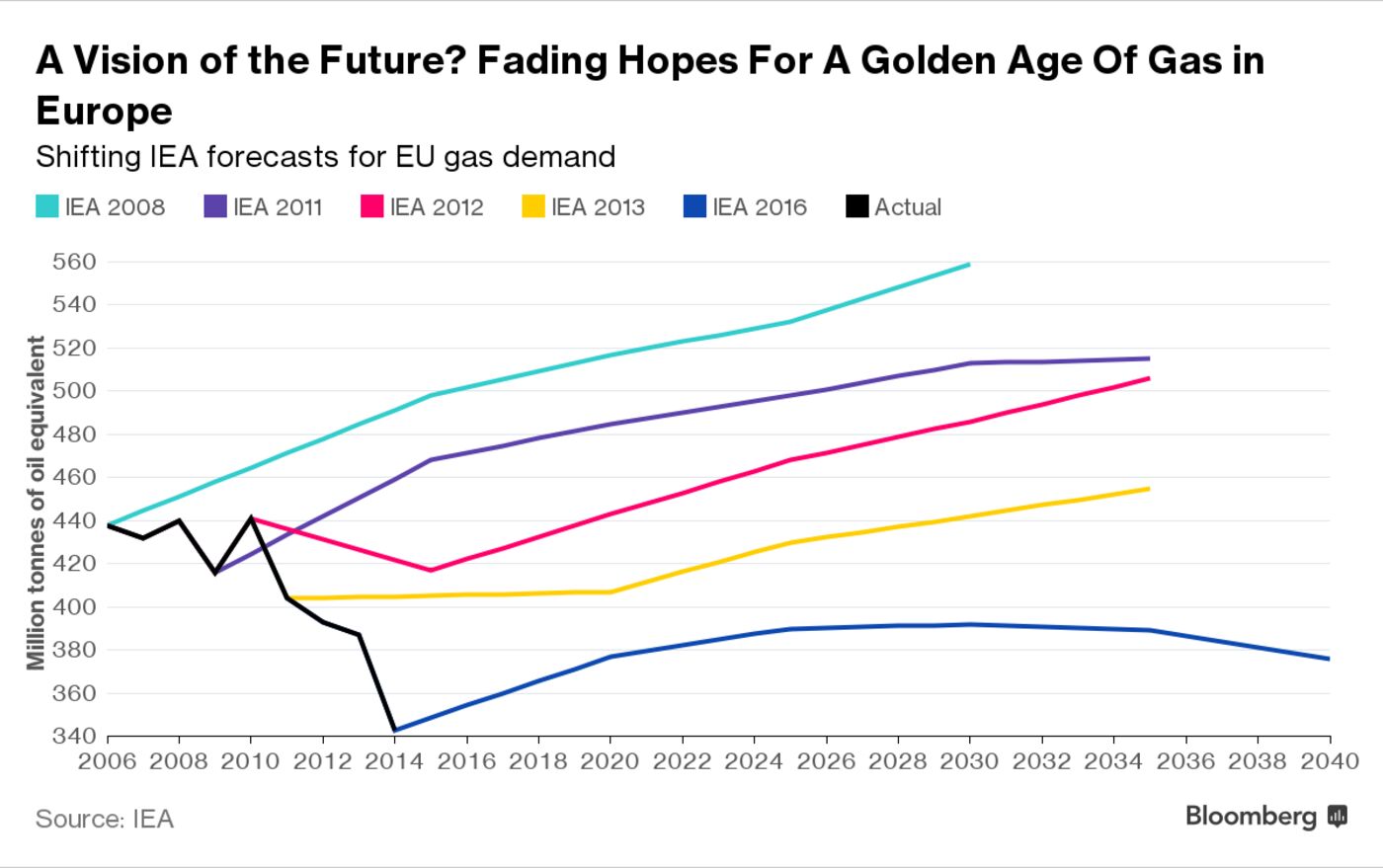 Still, most forecasts anticipate strong growth globally for natural gas demand for two decades or more. In the U.S., plentiful cheap supplies thanks to the shale boom helped gas displace coal as the primary fuel for power generation for the first time last year.

That graph tells the whole story, really. Renewables are racing ahead. This has significant implications for lots of things – particularly economies such as Russia, and the Middle East. You think we’ve seen political uncertainty? What happens when demand for oil and gas isn’t big enough to sustain those economies?
link to this extract