An Apple HomePod. If your home is this nice, wouldn’t it already have a Sonos Play:1 or similar there? Photo by portalgda (via Apple) on Flickr.

Ahead of Apple’s WWDC, research companies were falling over themselves to offer their forecasts about how the “smart speaker” market would grow over time.

Here, for example, is what Strategy Analytics reckoned the world would look like – note that it’s using installed base, not sales – over time: 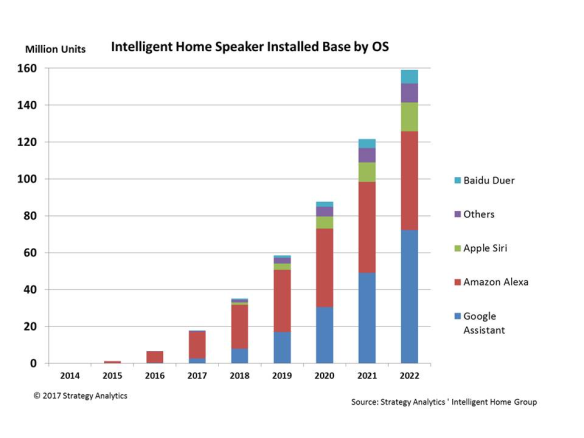 The way they see it, Amazon’s early lead with the Alexa is going to be eroded by Google, while Apple, “others” and Baidu (in China) will take the rest.

What I wonder about is: who’s left who wants to buy a HomePod? Who are the early adopters?

If you want a “smart speaker”, you’ve been served for quite some time in the US by Amazon’s Echo and Dot products, which are passably cheap. For Amazon, they’re the peace dividend of losing badly in the smartphone wars when the Fire Phone turned out to be a clunker.

More recently you’ve been able to buy Google Home – which managed to get a passing mention in a Modern Family episode in a recent series, so that is clearly reckoned to have reached far enough into the public consciousness not to merit special highlighting. (Sure, it could have been product placement, but there’s no point placing a product nobody’s heard of. Modern Family likes to play with modern tech obsessions: in 2010 one of the episodes was about Phil Dunphy’s mad desire to get an iPad on first-day release.)

And there’s even a (Microsoft) Cortana speaker from Harmon Kardon.

A recent survey of 1,000 people found that “smart speakers” are the most popular category of “smart home” device: about a quarter of US households have some smart home gizmo, and of those 56% reported that they “own and use” a smart speaker. And they really use it regularly. Half of respondents (we’re at about 12% of households) use it at least daily; another 39% use it several times per week.

Top five uses, in order: play music, ask for the weather, get news, get basic facts and trivia, get or set calendar and/or scheduling info.

Not mentioned in this, because it doesn’t do “smart” (so far, and probably not ever) is Sonos, which most people are probably familiar with: it provides single- or multi-room music and speech streaming for pretty much any service, with a range of high-quality audio speakers, as well as TV soundbars. It has been going since 2002, focussing just on multi-room music; I’ve liked the Sonos idea ever since I saw it in 2005, and I think that when it released the Play:1 speaker it found the sweet spot of price and audio quality. (I own a number of Sonos devices.)

Sonos, one should note, has hit some rough times, laying people off in March 2016. It isn’t clear how big its installed base is – it only talks about serving “millions of rooms” – but it’s very likely that it has users in multiple millions of homes. Update: this person says Sonos has annual sales of about $1bn, equating to 5m speakers per year. “Not mainstream,” they say. Though I’d say that 5m per year – more than a million a quarter – isn’t too bad.

And how does the install base look at present? According to CIRP, about 11m Amazon customers have an Echo, of which 52% (6.6m or so) have the cheap Dot. Amazon has about 70% of the market, says eMarketer – though others put the figure higher.

All this leaves one wondering: hasn’t the early adopter market, who might have been keen to buy a comparatively expensive smart speaker (and even slightly more expensive than Sonos) been tapped already? There are millions of those things out there already, playing music and telling people what they could figure out themselves by gazing out of the window.

After all, if you have a product which does something comparably new, then the general thesis is that you have to tap the innovator market (about 2.5% of the total who will buy it) and then the early adopter market (13.5%), and then spread the news to the “early majority” and “late majority” who each comprise 34%. Then finally you mop up the 16% of laggards. Note that even when your market is saturated, you don’t necessarily reach 100% of the population. Not everyone will want your gadget.

So at what stage are “smart speakers” – and multi-room speakers, since the HomePod does both?

We can probably be confident that multi-room speakers have breezed into their late majority by now. If Sonos is having trouble finding fresh buyers, that’s a sign of market resistance.

And if smart speakers are already in 12% of US households, then those are nudging well into the early adopter market.

This is different from the situation when Apple has launched previous products. The Macintosh, all those years ago, was entirely new in sporting a graphical user interface. The iPod came early in the MP3 player revolution – though many people had portable CD players, most people didn’t have an MP3 player, nor an MP3 library. The iPhone was out on its own in the smartphone category through its all-touch interface. The iPad defined an entire all-touch “slate” tablet market. (There had been tablets before, which had poor interfaces for touch.) Even the most recent new device, the Apple Watch, came when smartwatches had very small user penetration.

So in that sense the HomePod is coming at a very different time: three years (and some months) after the original Echo, and what’s more it’s coming in December, giving everyone else a chance to get their marketing in first.

How then is Apple intending to sell it? Apple is framing it as a really music speaker with a bit of intelligence thrown in. Here’s the quote:

“Apple reinvented portable music with iPod and now HomePod will reinvent how we enjoy music wirelessly throughout our homes,” said Philip Schiller, Apple’s senior vice president of Worldwide Marketing. “HomePod packs powerful speaker technology, Siri intelligence and wireless access to the entire Apple Music library into a beautiful speaker that is less than 7 inches tall, can rock most any room with distortion free music and be a helpful assistant around your home.”

This makes it sound like Sonos with benefits. It’s also saying: those things that Amazon and Google can do? We can do that, but sound better. It’s looking for the things that those can’t (yet?) do, and aiming for them. Early user tests (in very controlled environments) suggest that the HomePod sounds better than the Sonos Play:3 (which is comparably priced). Could be, though I’m not sure why a Sonos owner would give up the latter for the former. And we know from the triumph of MP3 over CD that in music, people prefer convenience over sound quality. Update: two points made to me after first publishing this post. First, Apple could find a market in China, where Amazon and Google are effectively excluded. Second, the privacy angle could be attractive; some people just don’t like the idea that Amazon and Google are going to try to sell them stuff. (Google Home has already started doing this, and will carry on; Amazon’s Echo/Dot/etc are intended to be mainlining for shopping lists.)

Overall, it feels as though Apple decided – as usual – that there was only one place it could thrive in this market: at the premium end. But again, if someone has the sort of money needed to buy a HomePod, why haven’t they already bought some Sonos kit? Or if they want a smart speaker, wouldn’t they just get an Echo/Dot/Home?

That’s what I’m puzzled by: how Apple is going to scoop up enough of the early majority market to make this work. Early majority buyers can be more price-sensitive than innovators and early adopters. Apple’s pitch seems to be for those who haven’t bought a Sonos, saying: look, you can control this with your voice. There’s surely a market there – Strategy Analytics thinks it’s tolerably big – but it’s noticeable that even there it’s a comparatively small slice of a sizeable market. Sometimes it’s good to let the early players sort the market out for you. But I think this might be one case where it isn’t.

4 thoughts on “In search of the early adopter (HomePod edition)”