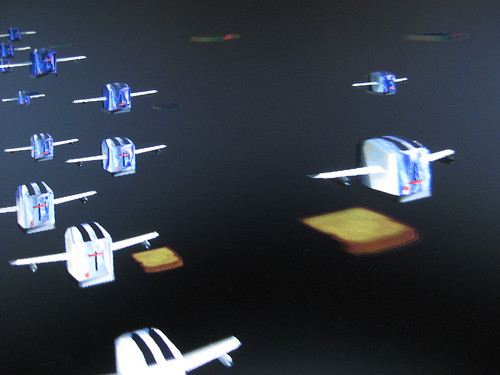 Flying toasters: great screensaver (which by definition makes it hard to photograph them). Photo by calamity_sal on Flickr.

A selection of 8 links for you. Use them wisely. I’m @charlesarthur on Twitter. Observations and links welcome.

The lost joys of the screen saver • The Paris Review

When I first encountered Jorge Luis Borges’s “The House of Asterion,” a short story whose narrator runs with madness through an endless labyrinth, a remote feeling of déjà vu eased into one of bizarre, welcome recognition. The house’s infinite doors, its emptiness, the dizzy futility—Borges seemed to be describing a popular screen saver from the nineties. Surely you know the one, the Windows maze, that redbrick warren of untold pivots summoned by the computer monitor when no one was around.

The ending of Borges’s story, wherein the narrator is revealed as the slain minotaur of Greek mythology, only reinforced the connection; to me, screen savers have always afforded some tenuous connection to the afterlife. The first one I can remember, on my family’s household desktop, featured a crimson psychedelia that overtook the screen’s blackness, a kaleidoscope of paisleys and helixes forever in a state of irresolution. Late at night, I’d prepare an unhealthy snack and sit patiently in front of the monitor to watch it, a child beseeching death. How fitting would it be, I thought then, if we all ended up trapped behind a pane of glass roiling with pixels?

My instinct was only reaffirmed by a childhood friend’s widowed grandmother, who held onto the conviction that her husband was trying to communicate to her through her Dell’s wispy screen saver. She spent her evenings careful not to disturb the cursor, basking in her lover’s strange séance.

If screen savers still have an eschatological tinge for me, it’s also because of their own demise…

…Visually mesmerizing, intellectually engaging, and nearly decommodified, the best screen savers achieve the virtues of multiple art movements. They even make a damning statement: the faintest human touch breaks their spell. Websites like ScreenSaverGallery circumvent institutional gatekeepers by encouraging users to download a new artwork in the form of a screen saver each month. I enjoy downloading these screen savers despite their poetic futility: today, any laptop that runs a screen saver is burning more energy than it’s saving.

A wonderful excursion through a topic that you thought you’d forgotten.
link to this extract

Heather Knight is a Stanford postdoc in robotics, which she will be teaching from autumn at Oregon State University:

C [USER-SET TARGET VELOCITY] — dangerous: autopilot seeks to achieve the cruise-control set speed as long as there is not an obstacle. this works fine on the a consistent street like a highway, but we discovered the hard way when we exited the highway onto a country road, switched autopilot on, and it tried to go from 30 to 65mph at maximum acceleration. expert users would be familiar with this, but we think tesla can do better.

A+ [SITUATION AWARENESS DISPLAY] — this display helps the human drivers have a mental model of what the car sees. I’d estimate that Autopilot classified ~30% of other cars, and 1% of bicyclists. Not being able to classify objects doesn’t mean the tesla doesn’t see that something is there, but given the lives at stake, we recommend that people NEVER USE TESLA AUTOPILOT AROUND BICYCLISTS!

C [GIANT TOUCHSCREEN] — hire UX designers, tesla!! yes, it’s a big screen. now make it intuitive to find things… it took us 5 screens to turn off the car. From a usability perspective this is a system for experts not novices.

She and her fellow tester also managed to lock themselves out of the car when they stepped outside to take a photo. They’d have been stuffed if they hadn’t had a phone, and service, and a friend back at base who had used the car the day before and so could unlock it remotely.

Also, the thing about cyclists. Though you’d be unlikely to engage the autopilot in a space where there are lots of (comparatively slow-moving) cyclists, would you?
link to this extract

How should I vote to stop a destructive Brexit? • InFacts

Put your constituency in our search engine to find the candidate to vote for to stop a destructive Brexit. Don’t know the name of your constituency? Search by postcode here. We have also explained the methodology behind our recommendations.

Notable how there’s now a broadly available methodology for deciding how to vote tactically. In some constituencies, it’s just possible this could make a difference.
link to this extract

The documents released under the Freedom of Information Act cover 11 months of correspondence between the Taoiseach, his officials and Sheryl Sandberg [chief operating officer of Facebook].

Beginning on January 3 2014, the Taoiseach’s officials set up a one-to-one meeting between the Taoiseach and Ms Sandberg in meeting room ME22 at the World Economic Forum in Davos, Switzerland. The meeting was to take place at 11am sharp on January 23. The correspondence reveals that Ms Sandberg sets the time of the meeting and confines it to 15 minutes because of her ‘tight schedule’.

At the meeting, Ms Sandberg lobbies Mr Kenny on taxation and on the spies issue, specifically advancing Facebook’s position in relation to proposed European Data Protection regulations. Later that evening Ms Sandberg ‘dropped by’ an IDA dinner at Davos.

Two days after the Davos meeting Ms Sandberg writes to Mr Kenny, and is sure to warn how changes to taxation or privacy laws might lead Facebook to consider ‘different options for future investment and growth in Europe’.

FOI is such a marvellous tool.
link to this extract

Davenport on the story in The Observer about Labour ads apparently being pushed out by Conservative ones:

here’s a few thoughts on how the Conservatives might have genuinely pushed out the Labour ads.

Look at the engagement numbers just above the comments in this picture. That’s huge engagement. And almost certainly not all from people in one location. The Conservatives will have been running this ad across the country.

High engagement, wherever it comes from, is proof to Facebook that an ad has clout. All the Conservatives then need to do is run ads across the country, turn off the weaker ads, and keep directing the ‘good’ ads to new audiences.

There’s a key technical point here. They’re not just duplicating the ad and running it to a new audience, because that would wipe the engagement every time.

They’re running the /same/ ad, with the same ID number, but to a new audience. This keeps the engagement from before, and gives it an unfair advantage with the new audience.

(Disclosure: Davenport helped me set up the Mailchimp email feed for The Overspill.)
link to this extract

What’s that drone flying in over the horizon? It’s a scout from Islamic State • LA Times

Islamic State now has air power. It’s not the equivalent of the 2,250-pound unmanned aerial vehicles that have become a lethal mainstay for the U.S. Air Force. Instead, the extremist group is deploying simple, commercially available drones — like the one that was hovering over the Ghazlani neighborhood of Mosul in March — on missions that are subtly changing the dynamics of the war in Iraq.

Camera-equipped drones can scout out targets for mortar strikes. Small, lightweight explosives can now be delivered by air. Some Islamic State units have used drones to shoot propaganda footage.

“It’s the job of the troops in the back of the column to keep watch for drones,” said Staff Maj. Ammar Ubaidi, a member of Iraq’s elite Counter-Terrorism Service.

“They relay the specifications and ask headquarters if it’s a friendly drone. If it’s not, they warn the units in the front and start shooting.”

A member of the Iraqi Special Forces shoots his machine gun at an Islamic State militant drone in the al-Barid district in Mosul on Dec. 18, 2016. (Manu Brabo / Associated Press)
Islamic State, along with other militant factions like the former Al Qaeda-affiliated Nusra Front, began using drones in 2014 to take footage of operations in Iraq and Syria for propaganda.

But it was Islamic State that developed their use further: According to internal documents from the group recovered in Mosul and published by the Combating Terrorism Center at West Point, Islamic State established the Baraa bin Malek Brigade, a dedicated cadre of drone pilots that is subordinate to the group’s Committee of Military Manufacturing and Development, its R&D section.

It is quite weird to think that small commercial drones are being battle-proven – literally. But this is what they’re really ideal for: as disposable surveillance.
link to this extract

AMOLED panels, due to superiority in color saturation, thinness and power consumption over TFT-LCD panels, have seen increasing adopted for smartphones and will eventually become mainstream smartphone, as well as a dominate solution for VR head-mounted devices (HMD), according to Digitimes Resaerch.

The expectation is that Apple is going to join this bunch, so it’s a safe bet.
link to this extract

“Yes, it was entertaining”: A twisted tale of Twitter trolls and fake terror victims • New Statesman

When I reach out to Sam to ask why she stole the image of a 19-year-old Minnesotan man to post on her Twitter account, the first thing she says is: “Am I getting paid?” The day after the Manchester Arena bombing, Sam took the profile picture of a man named Abdulfatah and posted it alongside a 137-character tweet. “Please retweet to help find Abdul,” she wrote. “He has chemo and we’re very worried. We last heard from him before Ariana’s concert”. She rounded it off with a hashtag. #PrayForManchester.

“Please retweet to help find Abdul. He has chemo and we’re very worried. We last heard from him before Ariana’s concert #PrayForManchester pic.twitter.com/LZa91mnOtZ” — sam (@skrrtskrtt) May 23, 2017

Abdulfatah was not a victim of the Manchester bombing and nor was he at Ariana’s concert, as he has been living in Cairo for the last year. Sam’s tweet was a lie that generated (at the time of writing) 1,280 retweets, mostly from people simply trying to help after a tragic terrorist attack. Over the last few years, trolls have responded to terrorism and other catastrophes by opportunistically pretending that their friends and family are among the victims of attacks. After the Manchester bombing, a handful of accounts continued this trend – for varied reasons.

“I had no aim,” is Sam’s simple response to being asked why she posted her tweet.

Sam explains that she wants me to pay her so she can “feed [her] team”, who she says are called the Halal Gang. After explaining that I cannot ethically pay for her interview, she concedes to speak when I say that I will link to her twitter account…

This quickly becomes much too complex for Tait to handle without meeting any of these people face-to-face – and quite a few won’t even answer a phone, won’t provide anything that might prove their identity. It feels like 4chan playing someone for the lolz – which is roughly what one of the psychologists tells Tait, in a roundabout way.
link to this extract