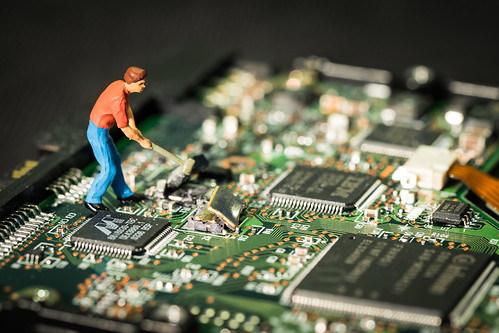 Hackers! They’re everywhere. Photo by The Preiser Project on Flickr.

AT&T, Verizon, Enterprise Holdings and other major US advertisers are pulling hundreds of millions of dollars in business from Google and YouTube despite the Internet giant’s pledge this week to keep offensive and extremist content away from ads.

AT&T said that it is halting all ad spending on Google except for search ads. That means AT&T ads will not run on Google’s video service YouTube and on a couple million websites that take part in Google’s ad network.

“We are deeply concerned that our ads may have appeared alongside YouTube content promoting terrorism and hate,” the company said in an emailed statement. “Until Google can ensure this won’t happen again, we are removing our ads from Google’s non-search platforms.”

Sanette Chao, who handles marketing communications and branding for Verizon, confirmed that mobile operator has also pulled its ads.

“Once we were notified that our ads were appearing on non-sanctioned websites, we took immediate action to suspend this type of ad placement and launched an investigation,” Chao said in a statement.

So this is really starting to gather some steam. A few advertisers in the UK is one thing, but when big brands like AT&T and Verizon pull ad money from YouTube and non-search sites, the reputational hit begins to be important.

Google is in trouble here, and it isn’t going to get out of it easily. In the physical world, say with billboards, you know where your ad is running. In the virtual one, you don’t.
link to this extract

Inside the hunt for Russia’s most notorious hacker • WIRED

The news about the sanctions [imposed on 30 December by Obama against Russia for hacking the US elections] had broken overnight, so Tillmann Werner, a researcher with the cybersecurity firm CrowdStrike, was still catching up on details. Following a link to an official statement, Werner saw that the White House had targeted a short parade’s worth of Russian names and institutions—two intelligence agencies, four senior intelligence officials, 35 diplomats, three tech companies, two hackers. Most of the details were a blur. Then Werner stopped scrolling. His eyes locked on one name buried among the targets: Evgeniy Mikhailovich Bogachev.

Werner, as it happened, knew quite a bit about Evgeniy Bogachev. He knew in precise, technical detail how Bogachev had managed to loot and terrorize the world’s financial systems with impunity for years. He knew what it was like to do battle with him.

But Werner had no idea what role Bogachev might have played in the US election hack. Bogachev wasn’t like the other targets—he was a bank robber. Maybe the most prolific bank robber in the world. “What on earth is he doing on this list?” Werner wondered.

This is the most amazing piece of work. Graff has gone into gigantic detail for a story which covers the Zeus botnet, Cryptolocker ransomware, and state-level hacking. Give yourself plenty of time, but make sure you read this.
link to this extract

the hackers are threatening to reset a number of the iCloud accounts and remotely wipe victim’s Apple devices on April 7, unless Apple pays the requested amount.

According to one of the emails in the accessed account, the hackers claim to have access to over 300 million Apple email accounts, including those use @icloud and @me domains. However, the hackers appear to be inconsistent in their story; one of the hackers then claimed they had 559 million accounts in all. The hackers did not provide Motherboard with any of the supposedly stolen iCloud accounts to verify this claim, except those shown in the video.

By reading other emails included in the account, it appears the hackers have approached multiple media outlets. This may be in an attempt to put pressure on Apple; hackers sometimes feed information to reporters in order to help extortion efforts.

They’re demanding $75,000 in bitcoin or Ethereum, or $100,000 of iTunes gift cards. For that many accounts? It sounds like a bluff. They might have access to a few hundred thousand iCloud accounts, but Apple would be able to spot access – and wiping – quite easily, one imagines.
link to this extract

Scrolling on the web: a primer • Microsoft Edge Dev Blog

Today, scrolling is still the most fundamental interaction on the web, and perhaps the most misunderstood. For instance, do you know the difference between the following scenarios?

This is a great, if technical, read.
link to this extract

The jumping-off point for this was a tweet about a Python for Kids book, where the counterfeit is just not as good. This is the first comment:

Counterfeits in comingled inventory has become pretty common on Amazon these days. “Fulfillment by amazon” has led them to comingle inventories on common products, meaning every seller’s product gets jumbled together.

The baby bath counterfeit was obvious I got a box with only Chinese characters on the box. Here is their response: “We had a recent issue with an Amazon seller selling “knock-off” Blooming Baths on our Amazon account. We have since had this seller removed entirely from Amazon, as these are counterfeit items and NOT the Blooming Bath. The product you have received is not ours, I suggest returning it and ordering again from Amazon or from http://www.bloomingbath.com. Just make sure the seller you buy from is “Blooming Bath” if you buy from Amazon.

“Very sorry for this inconvenience.”

I no longer trust Amazon for anything health related – it just seems too easy to get counterfeit products into their system.

Alex Cranz lays on the irony pretty thick, but then relents:

Past the iPad-like trappings, the Galaxy Tab S3 is, at its core, a supplemental computing device built for an audience I don’t think either Samsung or Apple quite knows. This isn’t for business use, or as a primary device for students, or a necessity for artists. Its a pure luxury item Samsung and Apple like to insist we need even we’ve already got phones and laptops that do everything the Tab S3 does. It’s what you buy because you’re tired of a computer on your lap while you watch TV or you want something light to carry on the plane for your next trip out of town.

The Samsung Galaxy Tab S3 is very good at being a supplemental device. If you broke your iPad or finally saved up enough pennies to purchase your first premium tablet than the Tab S3 is a fine $600 choice. It’s a $100 less than an iPad Pro and Pencil and the only true downside is how tablet-unfriendly Android can occasionally be. That’s a pretty dang minor downside in my book. As iPad knock-offs go, the Galaxy Tab S3 reigns supreme.

In summary: display looks nice, Android on a tablet (especially in landscape mode) doesn’t.
link to this extract

The painkillers that could end the opioid crisis • MIT Technology Review

For the last 20 years, [James] Zadina, a researcher at the Tulane School of Medicine and the Southeast Louisiana Veterans Health Care System, has been on the front lines of a battle to defeat an ancient human adversary: physical pain. But lately his work has taken on new urgency. As opioid-related deaths and addiction in the United States reach epidemic proportions, Zadina has been attempting to engineer a new kind of painkiller that wouldn’t have the devastating side effects often caused by commonly prescribed drugs such as Oxycontin.

His pursuit is difficult because the very mechanisms that make those pills good at dulling pain are the ones that too often lead to crippling addiction and drug abuse. Like their close chemical cousin heroin, prescription opioids can cause people to become physically dependent on them. Researchers have been trying for decades to “separate the addictive properties of opiates from the pain-reducing properties,” says David Thomas, an administrator at the National Institute on Drug Abuse and a founding member of the NIH Pain Consortium. “They kind of go together.”

But Zadina believes he is getting close to decoupling them.

It would be remarkable if this could be done. But would people stop taking opioids? Just because a non-addictive drug is available doesn’t mean that addicts won’t use the addictive one (which will probably also be cheaper). It’s hopeful, but fixing addiction – and the opioid problems in multiple countries – isn’t so simple as replacing drugs.
link to this extract

After ‘training’ the algorithm, researchers were able to achieve a 92% sensitivity in picking out tumour cells from the slides – significantly higher than the 73% achieved by trained pathologists with no time constraint.

In addition, the team recreated the accuracy in different datasets taken from other hospitals and scanning machinery.

The team did report an average of eight false positive per slide compared to none from trained pathologists. However, this rate was lowered through further customisation of the algorithm.

The algorithm results display as a heat map (shown below) that overlay a particular colour in regards to the likelihood of a specific part of an image housing cancerous cells.

In everyday practice, pathology slide analysis is a time-consuming process, especially when considering that each patient typically has 10 or more pathology slides for their suspected tumour. Even when the pathology process is complete, it does not always lead to a definitive diagnosis.

Because of this, using machines to accurately analyse imagery for disease diagnosis, providing a definitive decision in a much shorter time period, is an area of particular excitement in the ongoing adoption of AI in healthcare.

There must be a complicated calculation to make about how few false positives and negatives you hit before you let the machine do all the diagnosis and the doctors get on with more important stuff, such as talking to the patients.
link to this extract

the updates don’t mark a sweeping change as the company has been careful about how it tweaks the service. That’s because Maps is Google’s most-used app after YouTube and the fourth most used app overall with over 95 million people accessing it every month, according to comScore. Maps has become crucial to Google’s mobile strategy.

Given that, it’s noteworthy that the changes don’t include any new ways for Google to make money from Maps.

Location sharing is the most significant update. People can let anyone else know where they are by sending a text message with a link. The link can be opened by anyone, even if they don’t have the Maps app.

That could raise all kinds of privacy concerns. The links, for example, can be shared on to anyone else through a simple copy and paste, whether or not the original user intended their information to be known to a wider circle.

But Maps product manager Ben Greenwood noted there are already ways a person could share your location. “It’s also possible they could take a screenshot of where you are,” he added.

Additionally, users will be able to share their location for set periods of time, or indefinitely until they turn the feature off. People will receive email reminders every two or three weeks that it’s still on.

That level of location sharing could be a problem in an abusive relationship where one person could demand the other keep the feature turned on, making it easier for them to track their whereabouts.

This sort of location-sharing has been in Apple’s “Find My Friends” app for ages (in my family, we call it “Stalk My Friends”). Except you can’t copy-paste a link; you have to give permission explicitly to let someone track you.