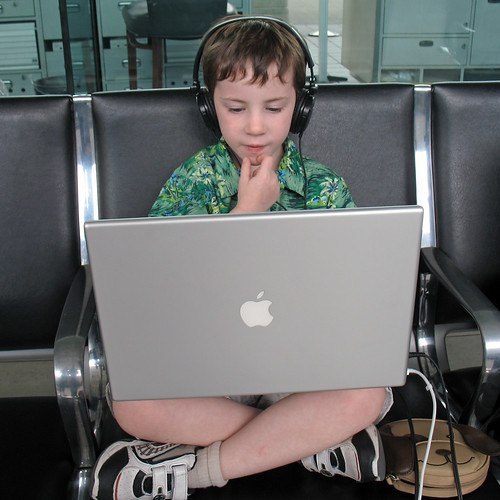 Kids aren’t watching TV as much as online any more. Photo by Michael Newman on Flickr.

while [Facebook] denies the report in Gizmodo that the company shelved a change to the News Feed algorithm that would have eliminated fake news stories because it disproportionately affected right-wing sites, the fact remains that the company is heavily incentivized to be perceived as neutral by all sides; anything else would drive away users, a particularly problematic outcome for a social network.
Moreover, any move away from a focus on engagement would, by definition, decrease the time spent on Facebook, and here Tufekci is wrong to claim that this is acceptable because there is “no competitor in sight.” In fact, Facebook is in its most challenging position in a long time: Snapchat is stealing attention from its most valuable demographics, even as the News Feed is approaching saturation in terms of ad load, and there is a real danger Snapchat beats the company to the biggest prize in consumer tech: TV-centric brand advertising dollars.

There are even more fundamental problems, though: how do you decide what is fake and what isn’t? Where is the line? And, perhaps most critically, who decides? To argue that the existence of some number of fake news items amongst an ocean of other content ought to result in active editing of Facebook content is not simply a logistical nightmare but, at least when it comes to the potential of bad outcomes, far more fraught than it appears.

The distribution of users’ computer skills: worse than you think • Nielsen/Norman Group

Summary: Across 33 rich countries, only 5% of the population has high computer-related abilities, and only a third of people can complete medium-complexity tasks.

One of usability’s most hard-earned lessons is that you are not the user. This is why it’s a disaster to guess at the users’ needs. Since designers are so different from the majority of the target audience, it’s not just irrelevant what you like or what you think is easy to use — it’s often misleading to rely on such personal preferences.

For sure, anybody who works on a design project will have a more accurate and detailed mental model of the user interface than an outsider. If you target a broad consumer audience, you will also have a higher IQ than your average user, higher literacy levels, and, most likely, you’ll be younger and experience less age-driven degradation of your abilities than many of your users.
There is one more difference between you and the average user that’s even more damaging to your ability to predict what will be a good user interface: skills in using computers, the Internet, and technology in general. Anybody who’s on a web-design team or other user experience project is a veritable supergeek compared with the average population. This not just true for the developers. Even the less-technical team members are only “less-technical” in comparison with the engineers. They still have much stronger technical skills than most normal people.

Facebook identifies additional metrics that have been misreported • Techspot

Facebook said in a blog post published Wednesday that several of its advertising and marketing-related metrics have been miscalculated due to a variety of discrepancies and bugs.

The social networking giant identified four specific metric areas – Page Insights, full-length videos watched, time spent viewing publishers’ Instant Articles and referrals within the Facebook Analytics for Apps dashboard – that have all been misreported in some way or another.

For example, in Page Insights, Facebook said its 7-day summary in the overview dashboard will be 33% lower on average while 28-day summaries will be 55% lower. Also, the average time spent per article in Instant Articles has been over-reported by as much as eight% since August 2015.
The findings don’t really have an impact on Facebook’s users. Instead, it’s the advertisers and marketers that are taking the hit as they’ve been led to believe that Facebook’s ad platform – and by proxy, their ad campaign – has been performing better than it actually has.

Anyway, tell us about the 99% of news that’s not affecting people.
link to this extract

The internet has overtaken television as the top media pastime for the UK’s children.

Ofcom’s report on Children and Parents: Media Use and Attitudes, published today, reveals that children’s internet use has reached record highs, with youngsters aged 5-15 spending around 15 hours each week online – overtaking time spent watching a TV set for the first time.

Even pre-schoolers, aged 3-4, are spending eight hours and 18 minutes a week online, up an hour and a half from six hours 48 minutes in the last year.

According to Ofcom’s data, children aged 5-15 have increased their weekly online time by an hour and 18 minutes in the last year to 15 hours.

In contrast, children are spending less time watching a TV set, with their weekly viewing dropping from 14 hours 48 minutes in 2015 to 13 hours 36 minutes in the last year.

Security contractors recently discovered preinstalled software in some Android phones that monitors where users go, whom they talk to and what they write in text messages. The American authorities say it is not clear whether this represents secretive data mining for advertising purposes or a Chinese government effort to collect intelligence.

International customers and users of disposable or prepaid phones are the people most affected by the software. But the scope is unclear. The Chinese company that wrote the software, Shanghai Adups Technology Company, says its code runs on more than 700 million phones, cars and other smart devices. One American phone manufacturer, BLU Products, said that 120,000 of its phones had been affected and that it had updated the software to eliminate the feature.

Kryptowire, the security firm that discovered the vulnerability, said the Adups software transmitted the full contents of text messages, contact lists, call logs, location information and other data to a Chinese server. The code comes preinstalled on phones and the surveillance is not disclosed to users, said Tom Karygiannis, a vice president of Kryptowire, which is based in Fairfax, Va. “Even if you wanted to, you wouldn’t have known about it,” he said.

Security experts frequently discover vulnerabilities in consumer electronics, but this case is exceptional. It was not a bug. Rather, Adups intentionally designed the software to help a Chinese phone manufacturer monitor user behavior, according to a document that Adups provided to explain the problem to BLU executives. That version of the software was not intended for American phones, the company said.

“It was not a bug.”
link to this extract

A report published Tuesday by the Institute for Fiscal Studies (IFS) says the government faces a giant budget hole if a hard Brexit hinders growth and sinks tax revenues. The think-tank’s forecast of a £14.9bn deficit by 2019-20 assumes the UK will be paying no EU budget contributions at that point. With that far from guaranteed, the prediction could be generous.

The IFS report forecasts that by that fiscal year, tax revenues will be £31bn lower than predicted by former chancellor George Osborne as the economy slows. This would be partially offset by the net £6bn the UK would save by halting all budget payments to the European Union, leaving a £25bn “black hole” destined to be filled by borrowing.

It follows projections from the National Institute of Economic and Social Research (NIESR) that consumer price inflation will hit 4% in the second half of next year. NIESR also anticipated that UK GDP growth would dip from 2% this year to 1.4% in 2017.

Everything is fine. (InFact is a pro-Remain site, but data are data.)
link to this extract

World could face oil shortage by end of decade, says IEA • The Guardian

The world could face an oil supply shortage by the end of the decade, triggering large swings in the price of the commodity, the International Energy Agency has warned.

In its annual publication World Energy Outlook, detailing expectations for global energy trends, the IEA warned that the recent low price of oil could have serious ramifications within years.

A barrel of Brent crude has more than halved in price since early 2014 from $112 (£90) to around $44 in mid-November this year, having fallen to $32 earlier in the year amid oversupply.

The IEA said this was deterring oil companies from investing in new oilfields, a trend it said could turn the global oil glut into a supply shortage within years.

WhatsApp steps into frame with launch of video calls • FT

WhatsApp, the app known for speedy messaging even on second-rate connections, is launching video calls on Tuesday to compete with Microsoft’s Skype, Apple’s FaceTime and even stablemate Facebook Messenger.

The SMS-replacement app, used by more than 1bn people a month, has developed a technology it hopes will enable video calls even on older phones on shoddy mobile networks, for example, in emerging markets where WhatsApp dominates.

Manpreet Singh, lead engineer at WhatsApp, said it was the “perfect time” to launch video calling as smartphones had become more mature, with better camera resolutions and batteries, and the state of mobile phone networks was improving across the world.

But even with better conditions, WhatsApp has had to focus on creating a network of servers across the world to minimise the delay on networks and develop a way to make video quality adjust to the speed of a user’s network.

Video calling, end-to-end encrypted texting, free voice calling – all this stuff is now table stakes for any messaging app. Even if it’s split into parts (like iMessage and Facetime). Not sure how Google’s Duo will fare once WhatsApp has this, though.
link to this extract

Bad battery life? Your phone’s software updates may be to blame • Daily Telegraph

Unsuspecting mobile phone owners may be left with flat batteries after they update their handsets, despite technology companies promising longer life and better performance from the new software.

The consumer group Which? found that when iPhones or Android phones are updated to the latest version of their operating systems, their battery life can fall by as much as three hours.

But that would be comparing the first X.0 version with the previous optimised one, right? I wonder whether later updates get things settled. The fact that it happens on both iOS and Android points to some code cleaning being needed. But, also, updates often mean more going on.
link to this extract

1 thought on “Start up: Facebook’s fake ad stats, most users *are* clueless, the Androids with built-in backdoors, and more”