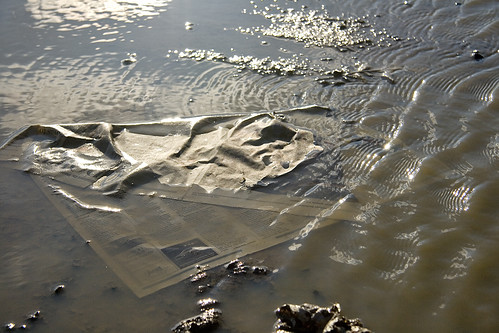 Newspapers: all washed up? Photo by Nathan Winter Design on Flickr.

A selection of 9 links for you. Apply externally. I’m charlesarthur on Twitter. Observations and links welcome.

Late yesterday, on the eve before Admiral tried to launch Firstcarquote, their application’s permission to use Facebook data was revoked by the social media site.

According to Admiral’s press release their app would use, “social data personality assessments, matched to real claims data, to better understand first time drivers and more accurately predict risk.” So young people could offer up their Facebook posts in the hope of getting a reduction in their car insurance.

However, their application has been found to be in breach of Facebook’s Platform Policy section 3.15, which states:

Don’t use data obtained from Facebook to make decisions about eligibility, including whether to approve or reject an application or how much interest to charge on a loan.

Bah – Admiral should just target people who have old or crashed cars via Facebook. But it’s a rare instance in which Facebook can look like the positively good player.
link to this extract

April 2015: Have publishers lost their minds with Outbrain? • Mediapost

Last November, Time Inc. announced a $100 million keg-party deal with Outbrain.  So now its sites will have more traffic, and hence more inventory, while lowering the quality of its audience through the lens of common sense.

Food & Wine magazine (part of Time Inc.) has a rate base of 925,000.  Advertisers see that number and it makes sense.  Foodandwine.com reports 8.5 million monthly unique visitors.  That number makes far less sense for this affluent brand.  How can its prestigious audience demographics not get watered down at this unnatural size?

Here are more examples of premium sites listed as Outbrain customers, who appear to have outgrown their brand’s natural size:

…The idea that buying a click to your site for 10 cents through Outbrain is going to then convert into a more dedicated site visitor is just an excuse. The real reason sites do this: to have more impressions for their lower quality advertisers buying the site via RTB, and to help fulfill orders sold to advertisers who bought that site directly. Neither outcome helps premium publishers increase the value of what they sell.

Outbrain is just another short-term fix that creates a long-term problem.

The point about New York magazine is quite neat; though of course there could be that many people interested in New York.
link to this extract

As an example of Android’s misunderstood security, [Android director of Adrian] Ludwig used the infamous series of critical bugs known as Stagefright, which were found last year. Ludwig noted that despite the alarm and the potential danger to practically all Android users, they have yet to see a real-life hack on an Android phone done exploiting Stagefright.

“At this point we still don’t have any confirmed instances of exploitation in the wild,” he said.

Obviously, Ludwig admitted that while things have gotten much better in the last year, telephone carriers and phone manufacturers that use Android still have to improve their update cycles and become quicker in adopting security patches.

“We got quite a bit of work left to do to get to a point where that actually happens on a regular basis across the whole the ecosystem,” Ludwig said.

Indeed, because no usurper was allowed to emerge, PC/Windows never moved to a mobile evolution of computing. Microsoft’s platform future was lost because the antibodies which eat disruptions were left unchecked.

But Apple’s immune system was suppressed. It allowed a disruptor to emerge from within. Apple gave birth to its future by suppressing the reaction to that new seemingly parasitic organism. It took an immense willpower to allow this to happen.

But it takes us back to the question of what to do with the incumbent, the donor of DNA and resources. The parent that sacrificed for the child.

The Mac is thus not treated disparagingly. It deserves and gets respect. It is preserved but with limited responsibilities.

Which brings me to the question of what it is allowed to be and hence what it is. It cannot take on the role of being the future. That belongs to the touch screen devices. It will not morph into a touch device any more than a teen’s parent will become cool by putting on skinny jeans. What it will do is become better at what it is hired to do.

The key to the Mac therefore becomes that which the iPad/iPhone isn’t: an indirect input device. The keyboard and mouse/trackpad are what define the Mac. The operating system, the apps, the UX, are all oriented around the indirect input method. The iPhone’s capacitive touch brought about the direct input method, a third pivot in input methods (first was mouse, second trackpad/scroll wheel). Each pivot launched a new set of platforms and the Mac is the legacy of the second.

Print newspapers are dying faster than you think • Vox

Advertising is a cyclical business. Revenue tends to go up during economic booms and then decline during recessions. So when newspapers ad revenues plunged in 2008 and 2009, many in the industry hoped this would prove a temporary setback and that they’d regain some of the lost ground once the economy recovered.

Instead, over the past six years the opposite has happened: Newspaper advertising revenues have continued to deteriorate even as the economy booms. The latest numbers from a number of major newspapers tell a grim story.

On Wednesday, the Wall Street Journal announced that it was consolidating some sections of the newspaper to cope with dwindling ad sales. The transition to a slimmer paper will be aided by a round of buyouts [voluntary and compulsory redundancies] the Journal announced last month.

And the situation is even grimmer at smaller papers. For example, the Ithaca Journal in upstate New York announced today that it was laying off two editorial staffers, leaving a paper that once employed an editorial staff of more than 20 people with just two full-time reporters.

Read on to discover who to glare at over this.
link to this extract

The social giant beat earnings estimates Wednesday, bringing in more than $5.7bn in mobile advertising revenue alone. That’s bigger than Facebook’s entire business in Q3 of 2015. It also surpassed one billion “mobile only” monthly active users for the first time last quarter, which means those billion-plus users never visited Facebook on any device other than a phone.

Why does that matter? Well, it underscores what we’ve known for quite a while now, that advertisers are spending more and more on mobile advertising, and Facebook is in a unique position to collect a lot of those ad dollars. In fact, it’s one of just two businesses driving the whole industry. (Hey, Google!)

That’s money that isn’t available to any other media outlet to win as advertising. Data from the IAB suggests that when you remove Facebook and Google, digital advertising in the US actually shrank in the first half of this year. This doesn’t seem healthy.
link to this extract

Federal authorities say a group of scammers that “bilked millions” from US consumers with pop-up ads and hijacked Web browsers has been sued by the Federal Trade Commission.

The scheme, which operates under the name Global Access Tech Support, used pop-up ads that told consumers their computers were “hacked, infected, or otherwise compromised,” according to the FTC complaint (PDF) published yesterday. Consumers are then instructed to call a toll-free number in the message. The pop-ups “are typically designed so that consumers are unable to close or navigate around them, rendering consumers’ web browser unusable.”

Anyone who calls the toll-free number is connected to telemarketers in India, who then roll out a sales pitch explaining that the caller’s computer is “in urgent need of repair.” The telemarketers claim they’re affiliated with either Microsoft or Apple or are “certified” by those companies.
If they’re still along for the ride at this point, users are directed to a website that prompts them to begin a remote access session. The telemarketers gain access to the computer and “run a series of purported diagnostic tests, which, in reality, are nothing more than a high-pressured sales pitch designed to scare consumers into believing that their computers are corrupted, hacked, otherwise compromised, or generally performing badly.”

I wrote about these gangs at the Guardian back in 2012; nothing has changed, essentially. They’re making millions per year from this scam, and have no reason to stop – VOIP calls from India are cheap, and people are so used to Indian accents on support lines that they’re easily fooled.
link to this extract

How Spotify can tear up the music business • Bloomberg

I’ve looked before at how Spotify could lure more paying customers by offering distinct high and low-end services at different prices. There’s something else it might do to improve profits and shore up its power: mimic Netflix by becoming a producer as well as a distributor — and take other steps to bring more music on board that doesn’t cost so much.That means acting more like a label. Traditional music labels do two big things: discover and nurture artists, and market them. With a trove of user data, a strong brand and global reach, Spotify could do that too. Imagine if it branched out into developing independent-minded artists such as British grime star Skepta. Or if it allowed unsigned acts to upload music to its service in a similar way to SoundCloud or YouTube. Spotify could even try buying independent music labels such as Beggars Group (home of SubPop and Matador Records) or Warp (London’s electronic dance music specialist.)It could then use its control over curated playlists and recommendations to push its own stuff. Over time, this might even give it more clout when negotiating with labels.

Sure to be antitrust issues if it were to get too big. And while streaming music might not be profitable, setting up artist labels isn’t a path to riches any more either.
link to this extract

The maker of fitness trackers said it now sees fourth-quarter adjusted earnings per share (EPS) in a range of $0.14-$0.18, far below analysts’ forecast for $0.75 according to Bloomberg. It lowered its full-year revenue guidance to a range of $2.32bn and $2.4bn, but analysts had expected $2.6bn.

This weak guidance came ahead of the holiday quarter, which is critical for consumer-electronics makers and retailers, since their products are popular gift items.

The market for wearable fitness trackers is intensely competitive, with Fitbit stacked up against the likes of Garmin and Apple.

In the third quarter, Fitbit’s unit sales grew 11%, and its average selling price rose by the same amount. New products like the Charge 2 and Flex 2 attracted new customers.

Sold more than 50m, but tough times lie ahead.
link to this extract