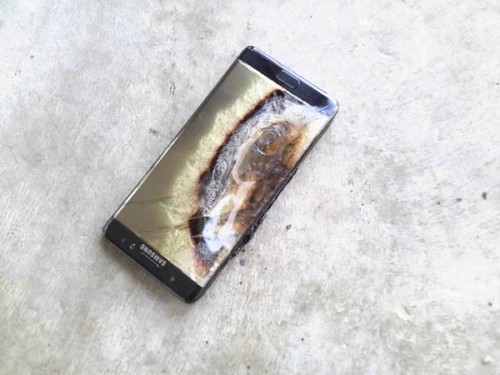 The Note 7 is toast. Photo by strategeme on Flickr.

So the Galaxy Note 7 is no more. Samsung has, belatedly, said that it has halted manufacturing of the device, and that anyone who has one should power it down and return it for an exchange.

Huawei’s going to be an obvious winner; the Google Pixel not so much, because of its limited volumes (I’ve got an estimate below). It’s very hard to see whether Apple will really benefit.

US carriers had over the weekend all decided to stop selling it after multiple replacement devices began overheating and catching fire. Having initially moved somewhat slowly to a recall when 2.5m of the devices had already gone out to carriers and end users, Samsung seemed bamboozled by the second stage; for a couple of days it was a deer in the headlights, when it seemed clear to everyone else (independent brand advisors, analysts, etc) that the simplest move was the Tylenol solution – get every damn one off the shelves.

The case study is enlightening:

By withdrawing all Tylenol, even though there was little chance of discovering more cyanide laced tablets, Johnson & Johnson showed that they were not willing to take a risk with the public’s safety, even if it cost the company millions of dollars. The end result was the public viewing Tylenol as the unfortunate victim of a malicious crime (Broom, 1994).

The difference here of course being that Samsung wasn’t the victim of a malicious crime; the fault seems to lie in the combination of the phone and the battery – perhaps there’s something about the fast charging via USB-C plus tiny variations in battery manufacture which makes some batteries prone to thermal runaway.

Ben Thompson points out in his Stratechery newsletter that the US consumer regulator suggested that the battery compartment is too small, which pinches some batteries. That’s probably enough to spark a runaway:

“The dimensions of the materials they put into the pouch were a little bigger than the pouch itself,” [Consumer Product Safety Council chairman Elliot] Kaye said. “By putting that all together and squeezing it into the compartment, it caused some pinching.”

The Note 7 will go down in history as the phone which Samsung tried to rush out ahead of the similarly-numbered iPhone (and bizarrely abandoned its own numbering, following 2015’s Note 5 with 2016’s Note 7.). It was announced in August, part of Samsung’s effort in 2016 to get ahead of everyone else by announcing its flagship much earlier than rivals, rather like glossy magazines publishing their Christmas issue some time around October.

Even though no smartphone is truly designed in a hurry, the Note 7 seems to have been the victim of a rush to market. That tiny bit less QA (quality assurance) testing, that insistence on a form factor… while the engineers succeeded in making it waterproof, they failed to make it fireproof.

So now it’s gone, and Samsung’s reputation is effectively being trashed all over the world by the fact of news reports about the end of production, the details of the fires, and so on.

Estimates vary on the damage in terms of lost sales. There were 2.5m already out there, but some reports suggest analysts thought it could have sold up to 19m units over its lifetime. Reset that to zero now.

Who wins? Or, to put it another way, where will those sales go?

I don’t think any of those initial buyers will go anywhere but Samsung. These are people who wanted the Note 7, and it offers them something (a stylus, split screen, the Samsung name) that they really wanted. It was exceedingly well received by reviewers, though of course that’s barely half the battle; getting it into peoples’ hands is a far more difficult task.

But for the rest? One of the “replacement in flames” people said he was getting an iPhone instead, but he seems like an outlier (he’s American, after all). Far more likely that someone who’s looking to buy a premium Samsung phone is embedded in the Android ecosystem, and so will be looking for something similar – big, perhaps a little flashy, premium.

Their first port of call is likely to be Samsung, but after this mishap it’s going to be tricky. These are people who have clearly chosen not to buy the S7 or S7 Edge, since those have been available for months.

In which case they could be looking for something quite different. Apple can tempt (the iPhone 7 Plus does have that New Phone look, sorta – especially if you get it in Unobtainable Black). But there’s a switching cost in moving from Android to iOS, in time spent finding equivalent apps if not in pure cost. (Though the latter may also apply.)

Huawei is the third biggest phone maker in the world, and it is very ambitious indeed. It is going to seek to take advantage of this everywhere outside the US – where it is weak – by pushing its budget. That’s certainly what I’d do if I were them, and they’re a deal more capable at this than me.

Huawei also has attractive hardware at the high end which will certainly appeal to Chinese and Asian customers, and it has been stepping up its efforts in Europe with some success too. It’s just possible that we’ll look back in a few years on this moment and realise that this was when Huawei took the chance to overtake Samsung at the top of the phone tree.

It could happen: if the reputational hit on Samsung is bad enough (and it is already sunk in China, the world’s biggest smartphone market) then it could be a long decline.

Hey, what about the Pixel?

But what about the Google Pixel? The search company launched two new phones recently. Couldn’t they take advantage of this new hole in the market, especially in the US where Huawei is weak (partly because of Google) and Google is strong?

Well, not on the numbers. The Pixel is built for Google by HTC. Thus HTC’s revenues are going to fluctuate partly through the number of Pixels that it has been asked to make. A number of those would have been made ahead of the launch.

Can we estimate how many? Sure we can.

In the first six months of 2016, from January to June, HTC’s revenue drifted downwards compared to 2015 by an average of 50% year-on-year.

Given that the HTC Vive VR headset hasn’t set the world aflame, I’m going to hypothesise that all the extra revenue (ie everything above a 50% decline y-o-y) in July-September comes from making Pixel handsets for Google.

(Yes, you could argue that the revenues seem to suggest a rebound after February – but the Vive went on sale in April, with preorders opening in February, which would explain that too.)

How many handsets does that translate to? It depends on how much you think it costs to make them. If you take the IHS estimate for the manufacturing cost of the iPhone 7, of $220, then HTC has made 363m/220 = 1.65m Pixels.

However, that seems like an absurdly high manufacturing cost. So let’s try $110 instead – given that Google is selling them for the same price as an iPhone, that would certainly help profits.

At $110, our $363m translates into 3.3m handsets already made and filtering into sales channels as you read this. I’d expect the true figure lies somewhere between these two – I could have overestimated the money put into this manufacturing effort, and if Google really is charging $600+ for a $110 handset, it’s bringing chutzpah to a whole new level.

So let’s say it might have around 2m to 3m handsets available over the next few months. Is that going to sate those seeking an alternative to the Note 7? Probably not – as a handset it’s OK, but it’s not YUGE like the Note 7, and it doesn’t have a cool stylus or all those other things.

Also, 2-3m handsets (built over three months) isn’t going to be enough to fulfil all those would-be Note 7 buyers, who are reckoned to number 19m over the next 12 months, remember. Google can keep the HTC factories working, churning out a million or so a month, but it would be very surprising if all of the 17m or so Note 7 buyers go for the Pixel instead.Google may well get a good slice of those buyers – more, in fact, than it was ever expecting, given the market it thought it was going to be launching into – but I don’t think it’ll capture all of them by any means.

(In passing, notice that that $363m only gets you to first base in this project: having some phones built. It doesn’t cover the R+D, sales, marketing or administration. You’re easily talking half a billion dollars here to do this thoroughly. And that’s for a phone which is only going to make a marginal impact on this quarter’s sales.)

And back to Samsung

In the end, most of those early Note 7 buyers are probably going to buy another Samsung. But that’s not what its management should worry about – nor the $2bn exceptional item that’s going to be sitting on the balance sheet for the next quarter.

It’s this: what happens when it announces the Galaxy S8 next January or February? People are going to ask whether it explodes, and Samsung will say of course not, and then inevitably there will be a case where it does, because manufacturing defects are inevitable. Hell, there’s even been a claimed instance with an iPhone 7, and Apple doesn’t use fast charging or USB-C and doesn’t squeeze high-capacity batteries into small spaces. It’s pretty much certain that a Galaxy S8 will go off. Then what?

And this is even before the media has gotten onto other flaming Samsung appliances, such as its washing machines in Australia. (Dedicated Overspill readers knew about this a while back.)

The reason why this is a particular problem now is that the smartphone market has pretty much peaked; in the premium market, replacement cycles are lengthening and sales are shrinking, so anyone that Samsung doesn’t capture now might be lost (as a potential sale) for another two or three years. That’s a substantial amount of foregone profit

The downside for Samsung, though, looks big. Events like this can make and break a company, and this is going to be its more serious test ever.