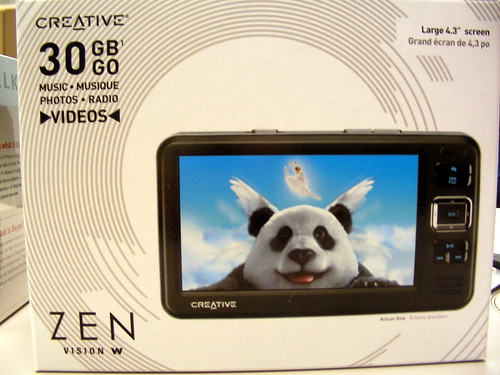 This isn’t an Android Wear watch, but there are similarities. Photo by David Lee King on Flickr.

Meanwhile Apple also began offering a thing for the Task, competing with both the Big Software Company and the Other Companies’ Devices. Except that Apple wrote its own software and built its own devices, which meant that it could extract profit from whichever part of the value chain it could, and subsidise the bits that weren’t profitable by its end pricing. If writing Software was a cost (which it is), it could make up for that by screwing down suppliers by buying up in volume, or raising prices subtly. The relationship between the Big Software Company and the Other Companies didn’t allow for that dynamic.

Pretty soon, Apple dominated sales of devices dedicated to the Task. This didn’t please the Big Software Company, which decided that the Other Companies needed someone to show them how to do it properly, and set about building its own Devices using its own Software to do the Task.

At this, the Other Companies looked askance at the Big Software Company, and essentially told it to go screw itself.

Not a moment too Zune

Reading this, you may – if your memory is long enough – have thought “oh, it’s the story of Microsoft, the MP3 makers, the iPod and the Zune.” And that story certainly fits. Microsoft wrote the Windows Media Player and controller software, which then had to synchronise with the music stores and with the music players made by OEMs, all with the intention of giving the customer the most delightful experience.

The reality was rather different – it was so hard to keep all the software and hardware synchronised that you never knew who to blame. Did your player not work because the OEM had been lazy in implementing Microsoft’s software, or because Microsoft had somehow screwed things up?

There was also the problem of marketing and advertising: despite having a powerful brand, Microsoft couldn’t really favour one OEM over all the others, so they all had to fight for themselves. You got different devices, different sizes, and no clear story about what to do.

Apple, meanwhile, came through the middle, launching into the MP3 player market just as it was ready to expand (in 2001, when MP3 was big on the desktop but not in the pocket) with a clearly identifiable design and really easy-to-use software. (Yeah, yeah, I know, you hate iTunes. Believe me, there was a time when it wasn’t overloaded.)

The rise of the iPod left other MP3 makers floundering; they just couldn’t get traction, because they couldn’t have a single message (they needed to differentiate themselves from each other) and they often didn’t update in sync. Apple, meanwhile, ruthlessly exploited advertising gaps, celebrity endorsement and an interested media (which ran endless “iPod killer” stories, the first in October 2002 – it was attached to a Creative Technologies player).

This went on from 2001-2006, by which time Microsoft decided that it had had enough of these messups – Steve Ballmer, then CEO, was particularly annoyed by Apple’s dominance – and so it made its own, the Zune. The project started in March 2006 and launched in November that year. You can guess that the timing wasn’t fortuitous; the Zune arrived as the MP3 player market was going into decline. It’s often overlooked that in the same January 2007 video where Steve Ballmer dissed the iPhone, he also talked up the prospects of the Zune:

Not only but also: Android Wear

However, you could read the above story and replace “Microsoft” with “Google”, the Task with “smartwatches”, and all the OEMs with… the OEMs who have struggled to sell Android Wear watches.

And it is a struggle. Last week, Android Wear finally passed 5m downloads on Google Play. As I understand it (from sources), each download is an activation of an Android Wear device.

Here’s how the download figure, using the waypoints on Play, has progressed since the release at Google I/O 2014, when all the attendees got one:

Android Wear downloads, definite waypoints; the polynomial fit is pretty good, according to the correlation coefficient (R-squared: 1 = perfect correlation, 0 = none).

That’s actually quite encouraging: it seems to suggest that after a slow start, sales are just beginning to take off.

And now here’s how it looks if you also include the number of reviews for the app on Google Play. The trend there suggests that reviews led downloads – that is, the ratio of reviews to downloads wasn’t steady, and has shifted down, so that over time fewer people who download the app leave a review. (I use that approach in my modelling to estimate download growth.)

Android Wear downloads, and reviews left on the app page. (Some data for reviews missing.)

So, 5m sold in 115 weeks (just under 30 months). Here’s the problem, though: those 5m have been divided up between LG, Motorola, Huawei, Asus, Acer and the various other bit players in the Android Wear space.

But that’s before we consider Apple’s offering here. Apple doesn’t release official figures for individual sales of the Watch (“competitive reasons” is the line, and they’re sticking to it). According to Canalys though in its first two quarters of availability – April-October 2015 – it sold 7m. That was probably split 4m + 3m, given the estimates for a 4m first quarter.

And for the Christmas quarter, estimates (again, necessarily) put sales at 5.1m. And then for the first quarter of 2016 they were estimated (again) at 1.5m – a long way down, for certain, but not surprising for something which isn’t a necessity (like, say, a phone in the modern age) but more of a gift. A bit like iPods used to be, in fact.

So that takes us to 13.6m by March. Since then there have been two more quarters – well, we’re nearly through September. In the second, Apple was reckoned to have sold another 1.6m amid a widespread decline in smartwatch sales. Probably sales during this current about-to-end quarter have been similar, or even lower.

Here though is where Apple Watch/Android Wear starts to look like iPod/MP3 players. Apple gets all the revenue from the Watch, and it controls the software, and it decides how it’s going to move the business along. That’s why Apple’s trajectory looks a lot stronger at present:

On cumulative sales, Apple Watch is outpacing Android Wear by a substantial margin.

By contrast the Android Wear OEMS don’t even get to personalise Android Wear; they just make the product, and still have the software support costs (those driver updates don’t write themselves) without getting any sort of side benefit. It’s not even as if using one model ties people to that brand of phone; interchangeability is the model with Android, unlike Apple. For the consumer who wants to pick and mix, it’s fine, but as a business model it brings some pain.

That’s clearly why, as Roger Cheng found out at CNet (by the shocking tactic of Asking People), the big Android Wear OEMs are going to hold fire for now:

LG, Huawei and Lenovo’s Motorola unit will not release a smartwatch in the waning months of the year, the companies confirmed to CNET. While LG launched a watch in the first half, it’ll have been more than a year since Huawei and Motorola offered an update on their wearables.

That marks a reversal from last year, when all three companies launched Android Wear smartwatches at the early September IFA trade show in Berlin in what was supposed to be a resurgence of the platform. At this year’s show, Chinese maker Asus was the only major tech company to return with a new Android Wear watch.

That’s perhaps a bit discouraging, since aside from chip companies, you’d struggle to see other OEMs in the big list on the Android Wear site:

Not many of these are selling Android Wear watches as their primary business. Or even secondary business.

According to Wareable, there are somewhere between 10 and 21, perhaps 24, Android Wear watches to choose from. (Its guide is pretty handy.) You can also get an idea of pricing, which tends to be around £200; again, that’s quite a bit less than Apple’s Watch used to be, though since the introduction of the new version the price for last year’s model has fallen to £269.

This is the inherent weakness, for a device that needs to be personal, in the modular business model: OEMs can’t control enough of the story around it. Samsung’s decision to go its own way with Tizen looks sensible; its use of the watch bezel for a control is an inspired little bit of UX.

In the face of indifference by the OEMs, though, what’s a Big Software Company to do? Well, perhaps what Big Software Companies do: roll its own. Google is said to be working on not one but two Android Wear watches of its own, set for release very soon. One is big and one is smaller, and it’s reported (by Android Police) that the larger one will have LTE connectivity as well as GPS and a heart rate sensor, and be a “do-all device that will allow Google to demonstrate Wear’s most robust capabilities, including the announcement at Google I/O that Android Wear 2.0 will support standalone apps”.

The smaller one, meanwhile, won’t have LTE or GPS and maybe not even a heartrate sensor. Price unknown.

If they’re going to happen, then they’ll come with the October 4 announcement of the new Pixel phones. Google has already indicated that it’s going to try to move beyond the Nexus line (something which has occasionally annoyed its Android OEMs; that’s part of why the Nexus phone line has never been big in sales terms). Perhaps it has decided the same for smartwatches. I guess we’ll find out zune enough.

2 thoughts on “Is Android Wear going to make Google create the next Zune?”