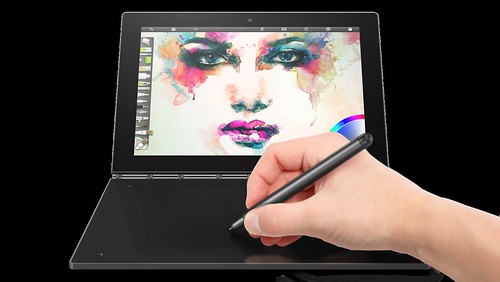 Lenovo’s Yoga Book: is this the new face of tablet computing? Not quite. Photo by bjtechnewsphotolibrary on Flickr.

I went to IFA in Berlin last week (courtesy of Harman Kardon; they have some interesting stuff I’ll write about presently) and during my time there got a chance to look at Lenovo’s new Yoga Book, which has attracted some interest.

(Here’s the TL;DR: it’s an interesting design, and it’s great that Lenovo is at least thinking of different ways to approach tablet design. But in the end it’s a short-term feature that doesn’t actually offer anything over other designs.)

Lenovo has a gigantic stand there, with the Motorola brand now limited to a little island in the middle of it. There were no smartwatches on view. There was a lot of space devoted to the Yoga Book.

How to describe it? The photos mostly do it justice. If it were a laptop, you’d say it was very thin. There’s a hinge, and a tablet-style 10.1in display which is touch-sensitive, and then there’s a basalt-black lower (or side) slab which is where the keyboard would be in a laptop. 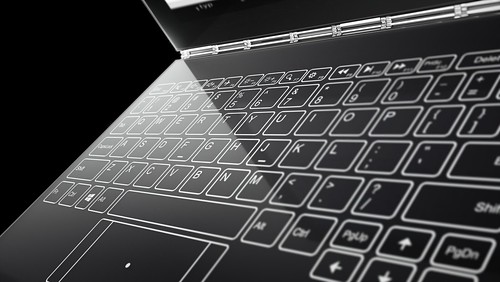 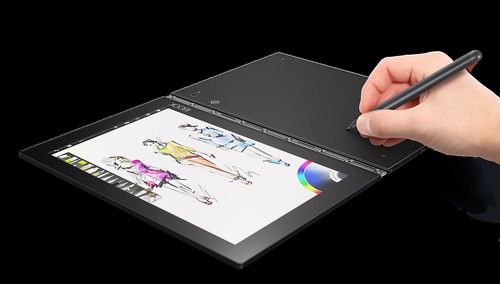 The Yoga Book’s “basalt slab” lights up to show an illuminated keyboard; otherwise it’s black. Photos by bjtechnewsphotolibrary on Flickr.

But rather than having moving keys, this lower part is just black – until you press a lit virtual button at the top right, which turns on the underlights (backlights isn’t right) to a virtual keyboard.

That is, indeed, impressive. Seeing the keyboard light into life is one of those “technology delight” moments. There was nothing, now there’s something! And you can type on it, as accurately and quickly as on any hard-surface virtual keyboard. (I can type pretty fast on them, and spent a little while proving it to myself on one of the Yoga Books.)

That isn’t quite all that the basalt slab can do: it’s also touch-sensitive, so that you can draw on it using a normal pencil or pen, though it might be advisable – as the photos show – to do that with a piece of paper in between. Great! You can copy your drawings that you made on the back of napkin into whichever drawing app you’re using. (I did not test this. No napkins to hand.) But I did see it being demonstrated plenty on the stand.

The screen itself is also touch-sensitive, in the same way as an iPad or any Android or Windows tablet. That’s because the Yoga Book is both of the last two – it or more precisely, either: you can buy a Windows version or Android one. (It doesn’t seem to be dual-boot.)

Here’s the thing, though. What else can the basalt slab do? Nothing. It can’t light up and display more content. It just does a keyboard. (I assume it can do different keyboards, according to language, though I didn’t check this.)

What’s the problem this solves?

So the basalt slab is nice, and it has a “delight the potential buyer” element. But let’s ask: how much better off are you with this than with, say, an iPad Pro with a detachable keyboard (or any iPad with a Logitech or similar attachable keyboard)? Or a Surface Pro?

The Yoga Book has one thing those don’t:
• you can alter the viewing angle for the screen to any angle, including bending the keyboard underneath the screen so that you have a tablet stand at any angle.

But, but, but, you say: what about all the writing on the basalt slab?

OK, what about it? How is it better to be able to write with a pencil at one remove from the screen itself (rather like using a Wacom tablet) than being able to write directly onto the screen with an Apple Pencil or Surface stylus? I puzzled about this for a while, but I really cannot see any scenario where anyone but a serious artist would want this function. If you occasionally need to get some handwritten content into an app, get something that accommodates a Pencil/stylus. Or, hell, just take a picture of it and draw over it in an illustration app. (Apps such as Procreate make this easy.)

Lenovo does seem to be targeting the “real artist” slice, judging by its promo material (from the link above):

Draw with the included Real Pen that detects 2048 levels of pressure—capturing subtle nuances of every stroke. No need to worry about batteries; the Real Pen works without ever needing a charge. You can even be more creative by using two hands: one on the screen to select tools, pan, and pinch-to-zoom the other hand using the Real Pen to draw on the Create Pad.Best of all, you can see your creations come alive on the display – unlike most tablets, where your hand blocks the display as you draw. 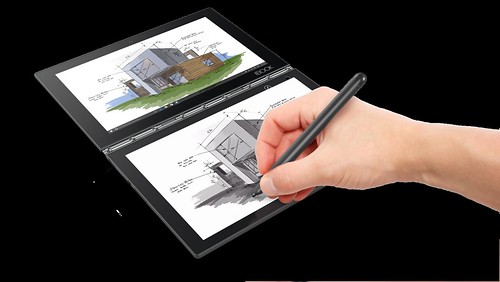 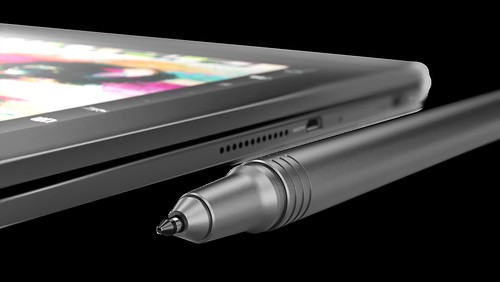 You can draw on the basalt slab with the Real Pen. But why would you, rather than just drawing directly onto the tablet screen? Photos by bjtechnewsphotolibrary on Flickr.`

When you look at it like this, the basalt slab looks less like a “really clever thing” and more like “yeah, it’s a touch-sensitive display that doesn’t display anything but black and white keys”, which is a good way to keep costs down. (Windows developer Mike Hole points out that it’s a bit like the dual-screen Acer Iconia tablet – which he describes as “very niche and flat keyboard [is] a no-no”.)

For all that, the Yoga Book retails for £430 in the UK, which is substantially more than the other two tablets here, which go for £130 and £180. Lenovo’s problem has been that it couldn’t break out of the Android tablet morass, which led it to lose money on them. So the Yoga is a clever move in that regard.

That’s the real problem that it solves: making money in the tablet market.

But is the Yoga Book a breakthrough in tablet design, bringing us dazzling new possibilities? Afraid not. It’s neat, but after a while you realise that the innovation is sustaining, not disruptive.

Liked this? Each day there’s a Start Up post with links and commentary. You can sign up to receive each day’s Start Up post by email. You’ll need to click a confirmation link, so no spam.